The Raconteurs haven’t played Pittsburgh in 11 years, a dreadfully long time to wait for such a fine band. They have been on a long hiatus. Their last appearance here was at the New American Music Union Festival in 2008 on a big lot at the developing South Side Works. It hasn’t been because band members have been slacking. Jack White (vocals, guitars) has been busy with his solo career, side projects, and his music business, Third Man Records. Also not slacking is Brendan Benson (vocals, guitar), who has released three solo albums in that period in addition to several collaborations with other artists, doing record producing and work for his own record company, Readymade Records.

The Raconteurs began in 2005 when friends White and Benson got together to write a song. It was a good one too—”Steady As She Goes.” It was so good, they decided to form a band in order to play it together. Thus The Raconteurs were born.

A nearly sold-out crowd packed the outdoor stage area of Stage AE Tuesday evening to see The Raconteurs play Pittsburgh once again. They are touring in support of their third studio album, Help Us Stranger. A copy of the CD or a vinyl copy was included in the price of the ticket and was to be mailed to ticket purchasers

The background soundtrack was shut off and the band ran out onto the stage. White pumped his fist up the air a few times to rouse the audience and then they started playing “Born and Razed.” The song, the leadoff song from Help Us Stranger featured some heavy drums with an interesting guitar and drum interplay.

Next up was “Level” which saw somewhat of an alternating staccato intro by Benson and White both with lead guitars. As they moved into the song, Benson and White had some killer guitar jams going with their dual leads at centerstage. White was like a panther prowling all around the stage with his guitar making beautiful lead guitar riffs. He would even step up onto the drum riser and jam there before returning to the stage again. He had a real bounce in his step. White also has a fantastic backward run move while jamming on the guitar, like a Steeler corner backpedaling in coverage. For most of the concert White played a red Fender Telecaster guitar. Benson didn’t move around too much but was just as solid with his lead guitar play. He appeared to play a Telecaster and a Gibson Les Paul.

“Old Enough” followed with a slower ballad pace. It featured sweet harmonies by White and Benson. Benson played acoustic, White electric. Not only is White an amazing guitarist and vocalist, but he is equally adept at playing keys as he did on “You Don’t Understand Me.” About midway through the song he switched to his lead guitar and turned the song harder.

White, who was dressed in black pants and a long sleeved black t-shirt emblazoned with the Batman logo but had the word BURGH inside of it, told the crowd, “I was offered 3 or 4 times by Christopher Nolan (writer/director/producer of Pittsburgh filmed, The Dark Knight Rises) to play the national anthem in the movie at Heinz Field…Jimi Hendrix owns playing the national anthem, I just couldn’t do it. I regret it a little bit though now.”

Benson wore a collared shirt that was green and had prints on it. On Keeler’s shirt the design looked to be many different hypocycloids of various colors (the diamond figures in the Steelers logo)

”Somedays (I Don’t Feel Like Trying)” sounded like it was a classic rock and roll tune from years back, but it wasn’t, it’s from Help Me Stranger. It has a slower start and finish with a crashing guitar and drum crescendo in the middle. At the end it has the repeating lyrics “I’m here right now, I’m not dead yet.”

Other highlights also included The Raconteur’s performing “Help Me Stranger” from their latest album. All cylinders were firing on the song. Benson played an acoustic guitar while White played an acoustic Fender Telecaster. Both White and Benson were extremely generous in giving touring keyboardist/guitarist, Dean Fertita, one of the best guitar riffs I’ve heard in awhile. He played lead several times during the song and delivered a riff so crunchy, fuzzy, and hot that I swear you could fry an egg on it! However, Benson and White’s joint acoustic guitar playing combined with Keeler’s drumming and touring multiinstrumentalist, Mark Watrous, on bongos/congas to make for a very strong song. It should do well on the charts. Benson and White had some very pleasing vocal harmonies on the song. On the song they turned the phrase, “Brother can you spare a dime” into “Brother can you spare the time.” After all, time is a valuable commodity too.

The group covered the Donovan song, “Hey Gyp (Dig the Slowness).” A few other hard rockers which showcased outstanding guitars, drums, and keys were “Sunday Driver” and the slow burn blues rock jam “Blue Veins.” And then everything came back to where it all began for The Raconteurs with their finale song—”Steady As She Goes.” The audience had fun all night and especially enjoyed that one.

White and his bandmates are musical aficionados. Their songs are highly original modern rock tunes, but they also have some subtle classic rock influences in them. Even though many of their songs are very hard, they are also very melodic. Every song the band played was fun and interesting musically. The cell phone free concert was a big success. White, Benson and band seemed to be enjoying their return to Pittsburgh very much. The Raconteurs played for one hour and forty minutes. Ex Hex performed a lively set as the opener and were well received by the crowd.

The Raconteurs are a top rock band whenever they choose to play together. If they did so on a more regular basis it would be very interesting to see them reach even higher. They are certainly a top notch rock outfit. With White shredding on almost every song and singing, Benson excelling on guitars and vocals, Keeler playing much, much more than a standard rock beat, and Lawrence providing a solid bottom and backing vocals, they have very combustible rock and roll ingredients. 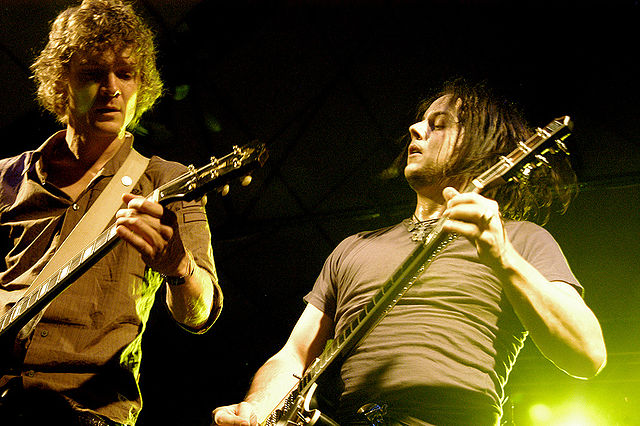 The Raconteurs’ Brendan Benson (l.) and Jack White (r.) jamming together in concert at the Accelerator in Stockholm, Sweden in 2006 (photo: Frida Borjeson and Wikipedia)

Here’s the whole setlist from Setlist.fm.