The Who once again visited Pittsburgh Thursday night at a PPG Paints Arena stop on their Moving On! Tour. Certain groups and songs bring back memories from times past. And with bands like The Who, who have been performing at a top level for years, their concerts are like a chronological marker for fans. In thinking about various Who concerts I’ve attended, I recalled what was going on in my life at the time and whom I went to see the shows with. One thing remained constant, The Who always delivered in concert.

For the Moving On! Tour, they are accompanied by a full orchestra—even a harpist was onstage—for most of the show. When the show was first announced, I was wondering what they would be doing with a full orchestra. Pete Townshend said during Thursday night’s show that when Roger Daltrey approached him about the orchestra idea, that he was less than enthusiastic about it. That he didn’t like the idea of someone (a conductor) telling him what to do on stage, but the more he heard from Roger about the idea, the more he liked it. And as he profoundly said, “America has some fucking great orchestras!”

Townshend, Daltrey, and the rest of the band took the stage to loud cheers and clapping from the audience. It was a simple stage set up. Daltrey performed mainly to the left of center stage with Simon Townshend (Pete’s brother who plays electric and acoustic guitars and backing vocals), Jon Button (bass guitar, backing vocals), and Billy Nicholls (backing vocals, tambourine) to his right rear. Drummer Zak Starkey (Ringo Starr’s son) was in the center of the stage. Townshend was to the right of center stage with keyboardist/backing vocalist Loren Gold almost directly behind him. The group was surrounded on three sides by graduated risers, on which musicians from the various sections of the orchestra were seated. There were approximately 50 members of the orchestra performing. A conductor stood on an elevated platform facing the back of the stage. The lighting was simple and effective. A ruffled curtain was at the rear of the stage. Two video screens were on each side.

When the crowd heard the opening notes to The Who’s Tommy rock opera song “Pinball Wizard,” they rejoiced. The song contained some nice brass parts. Things heated up more with “We’re Not Gonna Take It.” It was the conclusion of a seven-song mini-set of songs from Tommy. That was followed by a blistering crescendo with “Who Are You.” Its opening signature synths giving way to blistering lead guitar and drums from Townshend and Starkey, respectively, along with strong vocals from Daltrey, who also played acoustic guitar.

Fans loved the windmill power chord guitar strokes of Townshend and the mic and cord twirling skills of Daltrey. Even though there weren’t many of Daltrey’s renowned loud rock singing screams, his voice is still in pretty fine shape. Townshend played several different guitars throughout the concert, including a metallic gold Stratocaster with a white pickguard and a black one with a white pickguard. He has his own signature line of various guitars.

The Who reached back to their mod rock, destructive art (instrument demolition) days to perform “Substitute” and “I Can See for Miles.” Daltrey paid tribute to Townshend’s songwriting prowess by giving him attribution for the classic lyric in “Substitute,” “I was born with a plastic spoon in my mouth.”

Townshend told the audience during a song break, “It’s great to be back in Pittsburgh, great to see you again. In 1989, when we played here, Pittsburgh was in big trouble. We went to some new bars in the city then. People were still drinking, having fun, and having sex. Sometimes you have to go low to get high. It’s great to be here again.”

“Behind Blue Eyes” is always a top Daltrey song, and it was again at this concert. The Who put a surprise twist in the show when they performed an acoustic version of “Won’t Get Fooled Again.” It was a pleasant rendition with just Daltrey and Townshend. Daltrey sang and encouraged Townshend to get every last note out of his acoustic guitar. The guitar had a floral print decorative strip on its face. While the twist was very nice, it was a missed opportunity to see Starkey have some fun with the great drum parts of the regular version.

The band and orchestra blazed red hot once again as they veered into songs from their second rock opera, Quadrophenia, with “The Real Me” and “I’m One.” They were followed by the hard rocker “The Punk and the Godfather” with its several amazing acoustic and electric guitar flourishes with rising chord climaxes. Daltrey and Townshend were amazing on the song, accompanied by strong rapid-fire drum strikes from Starkey. Simon played the acoustic guitar parts to perfection. “5:15” followed and was right on time as well. “Drowned,” Townshend said, was about Jimmy in Quadrophenia who liked the ocean better than the people around him and contemplated drowning himself.

It’s impossible to replace the talent and soul of Keith Moon (The Who’s original drummer, who died in 1978), but if you’re going to try, then Starkey is definitely a wise choice. The same can be said of replacing The Who’s late bass player, John Entwistle, who died in 2002, and was called Thunderfingers because of his strong, prominent bass-playing skills. Button seemed to do a fine job in laying the bottom groove down.

On the beautiful instrumental song “The Rock,” it was interesting to watch Starkey bang his drums as the kettledrum player played his. During that song, the video screens showed snippets of British culture, politicians, and military. There were also clips of Moon and Entwistle. The orchestra, composed of mainly local musicians except for two people, performed very well.

Daltrey is always at top form when he performs “Love, Reign O’er Me.” He had a little additional fun when he spit out some water, simulating rain, before going into the main verse. During the song, Gold’s keyboard playing was highlighted as a spotlight shone on him. There was no encore break, and the last song of the night was “Baba O’Riley.” The swirling synths and keyboards started the song, then Starkey came in on the drums followed by Daltrey’s vocals and Townshend’s guitar. Touring violinist Katie Jacoby gave a wonderful performance on the song.

When the song ended, the audience rewarded the band with more applause and cheers. The Who thanked their Pittsburgh fans once again. The group performed for approximately two hours. The Who has never been afraid to experiment with things, and the orchestra accompaniment was a true success and didn’t interfere with the band rocking hard. For the most part, even enhancing it. The Who delivered once again. The Who will be releasing a new album this Christmas. 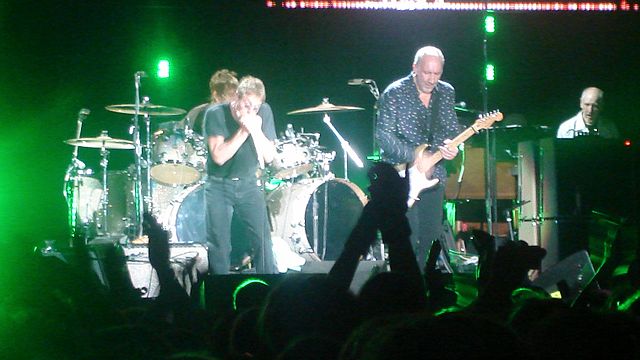 The Who performing at the Ahoy Rotterdam in 2007. (Photo: Joep Vullings and Wikipedia)