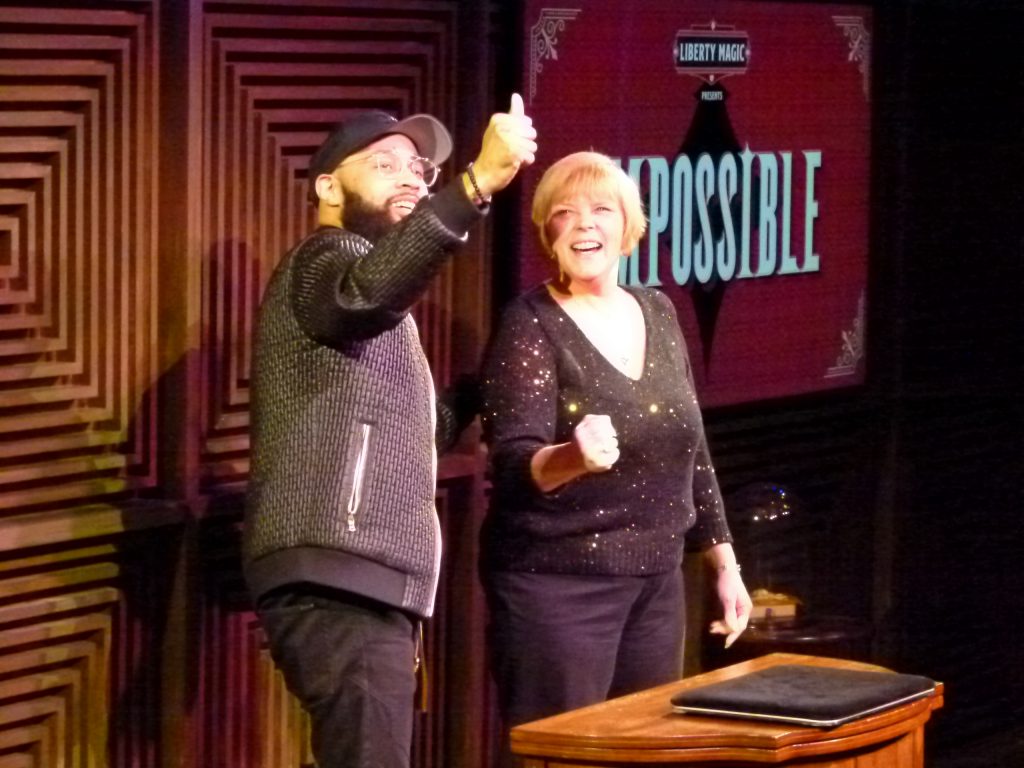 Jones and Lynne Fairman, his audience assistant, do some magic with rubber balls.

“Brilliant” is what Simon Cowell called magician Eric Jones after seeing him smash his buzzer button with a hammer and pull out a card that another judge had just picked. That trick pushed Eric Jones to become a Top 12 semi-finalist on Season 12 of the NBC competition show “America’s Got Talent.” Jones is the opening magician of the Pittsburgh Cultural Trust’s newest attraction, Liberty Magic. Jones was also one of the few people to trick legendary magic duo Penn & Teller on their CW show “Penn & Teller: Fool Us.” Jones has been playing to packed houses since Liberty Magic opened on Liberty Avenue in the Cultural District February 6.

Liberty Magic is an enchanting space, designed by City Theatre’s set designer Tony Ferrieri. In the street-front window there is a male mannequin in a straitjacket hanging upside down in a rectangular tank. This is an obvious homage to one of the most famous magicians of all time, Harry Houdini. He escaped from a similar rig while hanging upside down from a flagpole in the same block as Liberty Magic in 1916.

Upon entering the storefront, one notices the magic tricks, props, books, antique jars, and other curiosities displayed on built-in shelves. Some items are for sale. To get to the performance theater, you pass through a curtain and walk down a hallway where posters of old-time magicians have been formed into a large collage. At the end of the hallway sits Zoltar, an animated fortune teller in an arcade-style machine. If you get close, Zoltar says I feel your presence near, let me tell your fortune. I put a dollar in and he spoke a nugget of wisdom, and then a paper ticket with my fortune and lucky numbers came out of a slot.

Next you make a right turn into a small room where more relics and curiosities abound including a stuffed rattlesnake and white rat, skeletons of a few small animals, and even a collection of skeleton keys. There are also stacks of old-time suitcases. From there, guests enter the magic performance space.

The magic arena is an intimate room where the audience sits in chairs on graduated risers. Two video screens are at stage left and right where introductory videos for the magicians are shown before they enter. There’s seating for almost 70 people. Before the magician enters, Liberty Magic’s Venue Manager and Host, Graham Fandrei, gives background info and shows a short video regarding the magician.

Jones took the stage to applause, introducing himself and speaking for a bit on how he got his start in magic. He referenced two big influences in his life, his father, and legendary magician David Blaine, who mentored him for several years. He was an engineering student at Cornell University until Blaine convinced him and his parents that Jones should leave school and study magic under his tutelage.

How’d Eric Jones Do That?

After his short remarks he got right into sleight-of-hand magic tricks, almost always enlisting members of the audience to fun effect. While performing his Impossible show, Jones displayed a keen sense of humor when interacting with the audience. This made his performance even more fun. 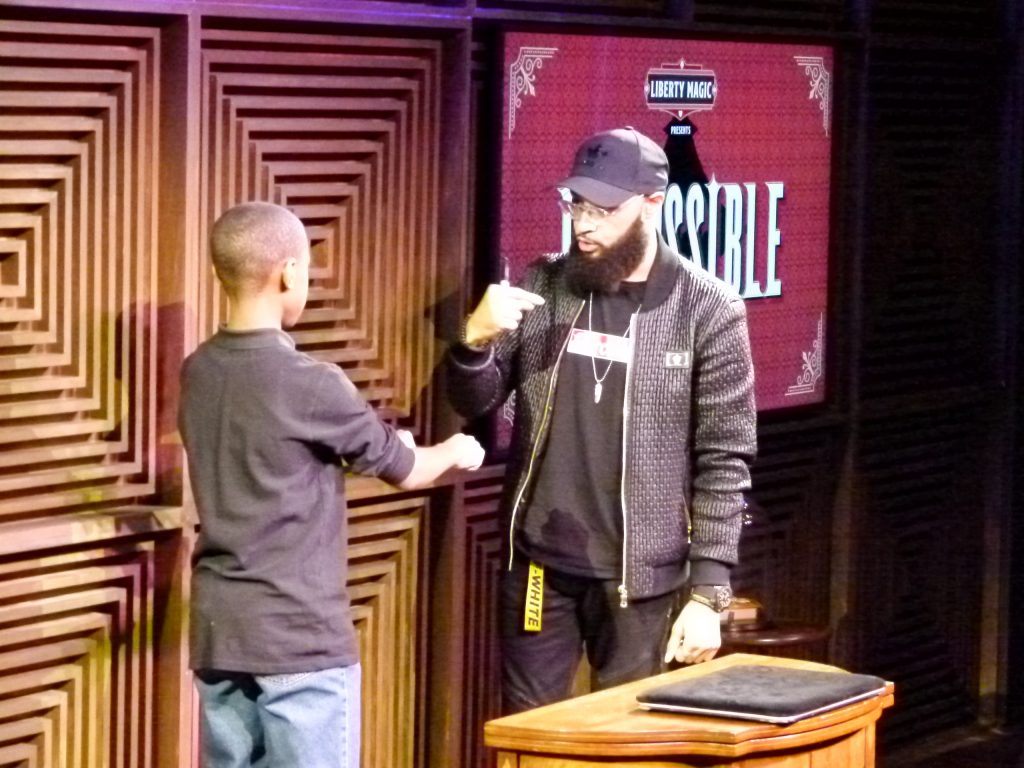 Magician Eric Jones and young Eric from the audience do a trick based on their love of Marvel Comics’ X-Men.

For one trick he asked if anyone in the crowd was a Marvel Comics fan. Hands went up. Then Jones refined his search by asking who was a fan of Marvel’s X-Men series. He picked a young boy to come up. Jones asked his name and the boy said Eric, which delighted Jones. He then did a trick where he produced a black X on the inside of young Eric’s palm. The crowd was wowed and applauded loudly.

He also brought up Lynne Fairman from the North Hills to assist with an amazing trick involving small red rubber balls. One ball held firm in her closed hand became, with magic from Jones, three balls when she reopened her hand.

During some appearing and disappearing silver-dollar coin tricks, Jones mentioned that this was his ex-girlfriend’s least favorite trick, making money disappear without her assistance. He even brought up an audience member to take over a magic trick for him. The woman did the trick while Jones sat in a chair and showing her prepared flash cards on what to do and say. The climax of the card trick was revealed by him while sitting in the chair at stage right. His own card tricks were fantastic too. 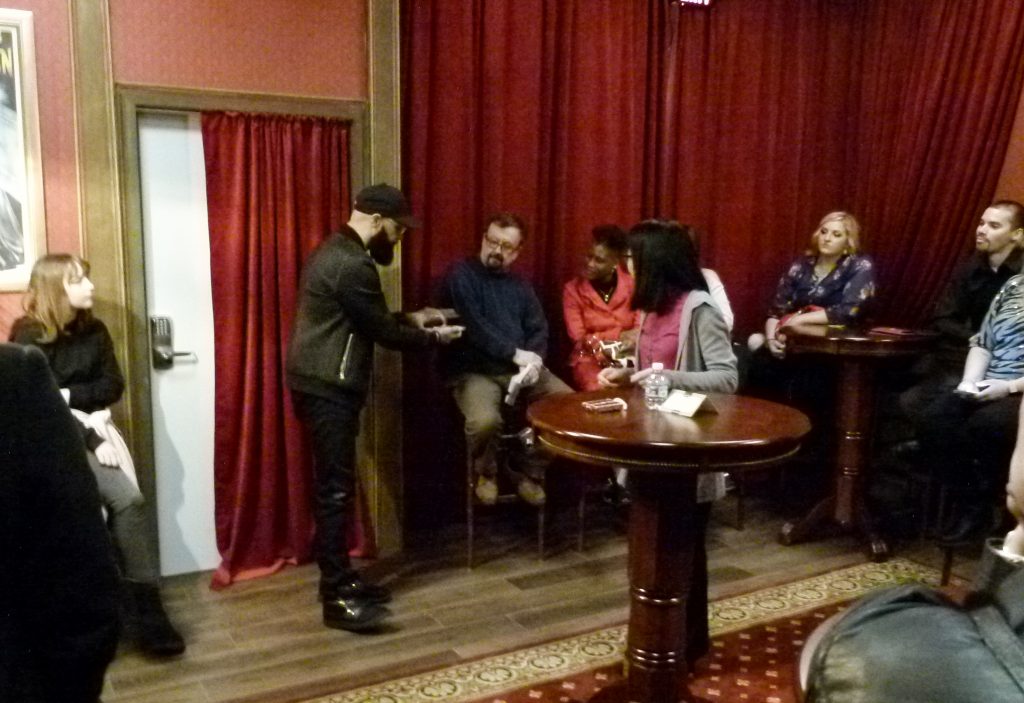 After the performance, audience members who had paid extra for the Skeleton Key VIP Experience enjoyed a close-up exchange with Jones. This special package includes seating in the two front rows, plus post-show admission to an intimate parlor backstage where the magician talks with the keyholders and does a few more tricks for about twenty minutes.

During the backstage event I asked Jones how it felt to be the opening comedian for Liberty Magic. He replied, “It’s a great honor. There’s only a few venues like this around the country —Chicago, The Magic Castle [in Los Angeles], Nashville, Philadelphia—Liberty Magic is a godsend. It allows performers to have a residency here for a little while.”

Jones said he finds inspiration for his act from other areas of art and culture. When asked how many tricks he knows, he said, “An amateur knows thousands of tricks, a professional masters a few.” He added, “I’m still learning.” Jones also mentioned that proprioception (Wikipedia defines it as “the sense of the relative position of one’s own parts of the body and strength of effort being employed in movement … sometimes described as a sixth sense) is an important part of his magic. It’s especially evident when he makes cards fly through the air during several of his card tricks.

Jones will be performing Impossible through March 17. Then Pittsburgh native and nationally known magician Lee Terbosic opens In Plain Sleight, which will run from March 20 through May 12. Terbosic, Dennis Watkins, and Nathan Allan are artistic advisers for Liberty Magic, which comes under the direction of the Pittsburgh Cultural Trust’s Scott Shiller, Director of Artistic Operations; and Kevin McMahon, President & CEO. There is a BYOB option for a corkage fee of $5 per guest. Liberty Magic is also available for private events. Children under 12 are not admitted.

Liberty Magic is at 811 Liberty Ave., Cultural District. For tickets and more information visit Liberty Magic or call the box office at (412) 456-6666.