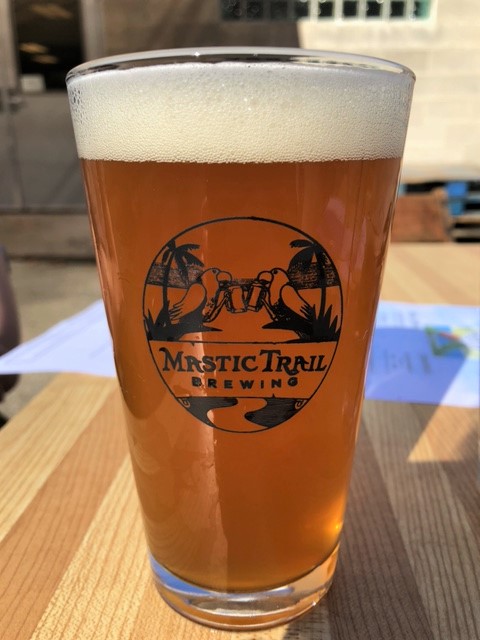 My girlfriend and I visited Mastic Trail Brewing to try something different, but we left knowing that we had also tried something truly exceptional. 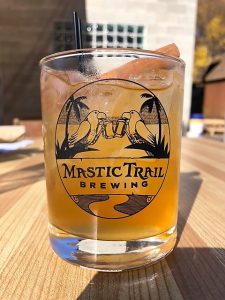 A cinnamon stick rests on a tumbler of the Autumn Wind cocktail.

The Caribbean-themed brewpub opened this July in Glenshaw at the former Moose Lodge 46. (A wire moose still rests on the roof.) Its name refers to a trail on the Grand Cayman Island, part of the larger Cayman Islands, which are beloved by founder and owner Ben Williams. The menu includes craft beer, tropical cocktails, and Caribbean food.

We went on a Saturday afternoon for lunch. It was one of those rare cloudless days in Pittsburgh, so we ate outside.

She started with the Hazy Jones IPA (6.5% ABV), which was bronze-bodied, hop-forward, and fruity. This was one of two beers brewed in house, but it will have eight to ten in the near future. For now, there were plenty of other craft bottles, cans, and guest taps ranging from Strange Roots in Millvale to Chimay in Belgium.

I opted for the Autumn Wind, one of many hand-crafted cocktails. This one was made with Mount Gay Eclipse Rum, cinnamon, and house-made apple shrub. The shrub was a cocktail mix of locally grown apples, cider vinegar, cinnamon, and grains of paradise. The Autumn Wind tasted like apple-cinnamon kombucha but with a boozy bite. Excellent. Both the in-house craft beer and cocktails were $8.

Next we got the West Indian curried shrimp dip with chips ($11) for an appetizer. It blended shrimp and curry equally with a hint of coconut. For my entrée, I ordered the Cubano ($14). The sandwich balanced all five ingredients of citrus pulled pork, ham, swiss, dill pickle, and yellow mustard. It came with one’s choice of sweet potato fries or coconut rice and peas. Sweet potato fries at no upcharge? Yes, please. They and the sandwich were delicious. 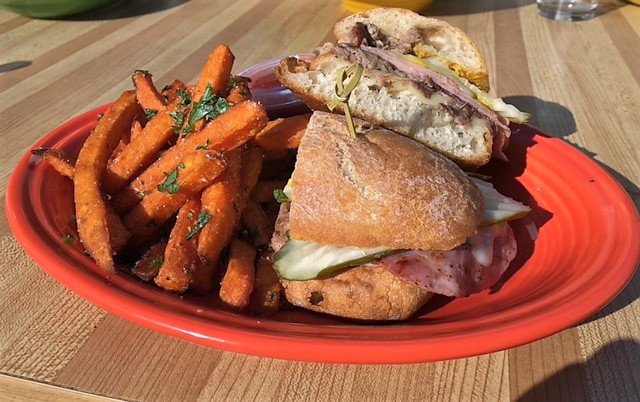 Sweet potato fries are one of two sides that can accompany sandwiches, like the Cubano.

However, the star of the meal was the roasted jerk chicken. She ordered the half bird ($20; a full bird is $35) with medium hotness. The chicken was spicy, but not uncomfortably so. One can choose heat levels of medium or hot. The meat was tender and fell right off the bone.

As for the sides, the tostones (fried plantains) were a little too salty, but the rice contained a proper amount of coconut. The side of ginger-lime greens, with its citrus flavor, cleansed the palette perfectly. We were too full for dessert, but next time, I’ll order the plantain cheesecake tart ($8). 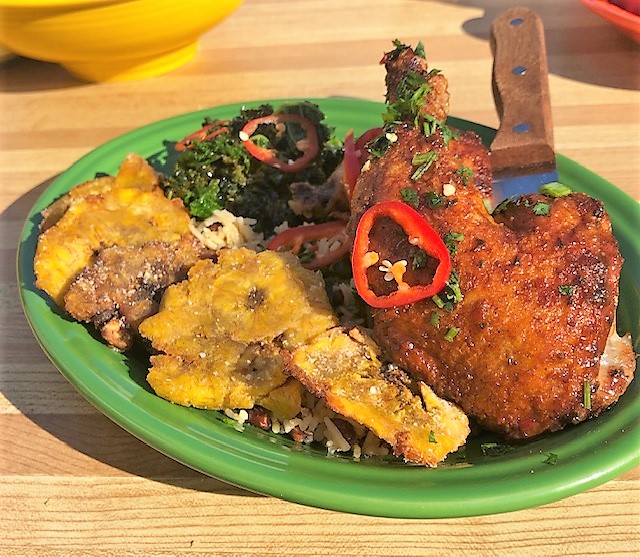 Having Fun while Staying Safe

I asked Ryan Dodge, director of hospitality, how it’s been opening a brewery during the pandemic.

“Kind of like feeling your way down a dark hallway,” he said, adding, “Response has been great. Everybody who’s come in has given us rave reviews.” 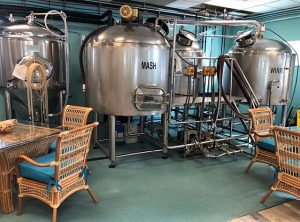 Patrons can admire the brewing tanks inside the restaurant.

Including me. I’ll add the service was prompt and—as is still so important—safe. All employees wore masks inside and outside, and tables were spaced well over six feet apart. Also spaced six feet apart are the pool tables in the Ocean Room, which has its own bar and seating. As of this writing, restaurants must still operate at 50% capacity, so call ahead to reserve a table if sitting inside and one’s party is five or more. Event nights may still be first-come, first-served.

Entertainment includes live music Thursday, Friday, and Saturday evenings. Upcoming acts include the Flow Band and the Juan Vasquez Project. Apparel and merchandise, such as T-shirts, are also for sale as are crowlers.

Whether it’s for food, drink, or music, follow the Mastic Trail. Bring your family. Bring your dogs (if sitting outside). Most importantly, bring your appetite. 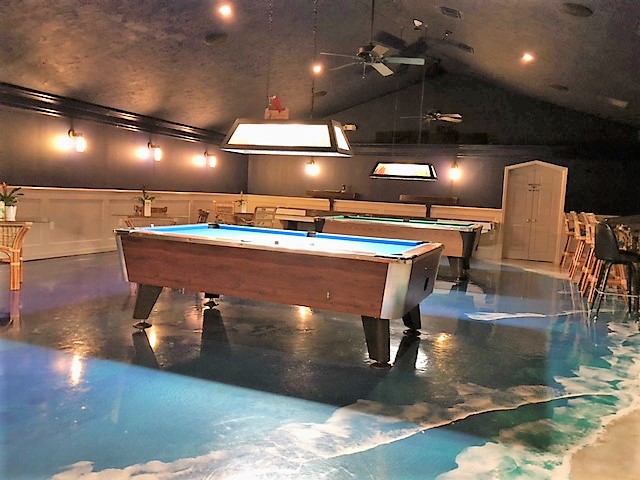 The Ocean Room features pool tables and a floor that resembles a beach.

Story and photos by Christopher Maggio.
Additional photos by Rachel Francioni, a Pittsburgh-based artist and photographer.