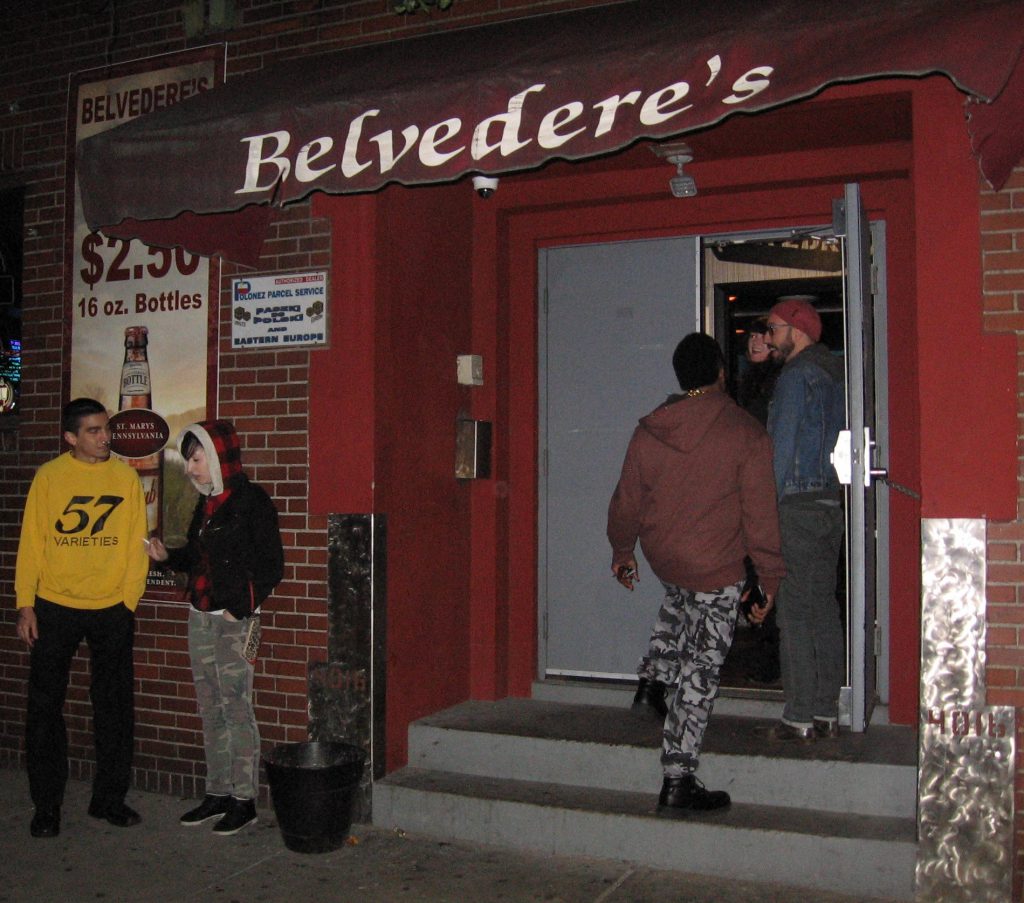 The smell from the fire is long gone. The inside, reconstructed. There’s more dance nights than ever. Most of the employees have returned, Thursday is still ’80s Night, and the back room is where people can swap dress shoes for dancing shoes, that is, if they want to. If there’s one thing that hasn’t changed since Belvedere’s Ultra-Dive reopened six months ago, it’s that the staff wants its patrons, whether from the old or new Lawrenceville, to feel welcome.

What is now Belvedere’s originally opened in 2001. “We didn’t really have a name back then,” Natalie Misiaszek, manager and daughter of the owners, said. “We let some of the customers pick a name, what they thought would be cool.”

Give them an inch, they’ll take a mile—thus its first name, “The Huggybear” or “Huggybears,” depending on which employee you talk to. Memories are fuzzy because the original moniker lasted only a month. “Abduction” had a little more staying power, but in 2004, Misiaszek’s mother renamed it after a Warsaw palace used by Polish presidents.

Misiaszek’s parents, both from Poland, bought the bar, formerly a Polish army veterans club, in 1997. Her father refurbished it over the next four years. Nods to the family’s ancestry adorn the walls, such as a placard that lists captains and colonels at the former post.

“My dad always had this idea of opening up a business one day, so when he opened his store, he wanted to move on to the next venture, which would be a bar,” she said. Her parents’ first business was Alfred’s Deli and Market on Polish Hill (still owned and operated by the Misiaszeks). (l. to r.) Christina Grogan, Nathan DelSignore, and Talia Mercado laugh at photos taken in That Crazy Photo Booth. Part of a promotion by Sazerac, the company that owns Fireball Cinnamon Whisky, the booth features hats, glasses, and other “crazy” accessories.

From 2001 through 2005, just the front bar was used, and the back room was closed. About 2006, the employees started organizing events for the back room, beginning with DJs spinning punk music. Live shows soon followed. Then came a popular ’80s night, originally titled New Era Oldies Night (NEON), an acronym still attached to the weekly event. By the late 2000s, Belvedere’s was one of Pittsburgh’s great indie venues.

Then on Dec. 30, 2014, hours after last call, an oily rag left on the kitchen floor oxidized, releasing heat until it spontaneously combusted. Around 5 a.m. that morning, Mikey the Pants, a local punk show promoter, spotted smoke while he was walking along Butler Street. He called the fire department and Belvedere’s employees, including Joy Toujours, the promoter. The fire consumed the kitchen. Smoke and water damage wrecked the back and front rooms. In a few hours, one of the original Butler Street nightclubs closed indefinitely. Toujours spent the day calling employees and entertainers to break the news.

“No one got hurt,” Toujours said. “We weren’t at capacity. It would have been a fucking, goddamn nightmare. It makes me shake because I’m the one who’s in charge of the safety and making sure we’re staffed appropriately, and me and my fucking staff actually give a shit. And that would just be the worst thing ever. I’m much happier that no one was in the building.”

Had the fire happened in 2005, around the time Toujours was hired, the club may never have risen from the ashes. Back then, it was just Belvedere’s and Thunderbird Cafe, which is currently closed for renovations, to shoulder each other through the tumultuous, early days of Lawrenceville nightlife. By 2015, multiple clubs were operating and ready to fill the void, albeit temporarily. Cattivo, Spirit, and Remedy Restaurant and Lounge, all in Lawrenceville, took turns hosting ’80s Night. These venues eventually returned the event to Belvedere’s when it reopened. The staff of Belvedere’s also planned a benefit party at Gus’s Cafe in Lawrenceville. Plenty of other venues had separate benefits to help the club and its employees.

“The thank you list is endless,” Toujours said, adding that the break did help to refresh him and his coworkers. “I was extremely burned out. The time off, a little bit too long, made me realize how much I enjoyed it.”

On May 19, 2016, Belvedere’s reopened with a secret (though packed) ’80s Night. An official opening followed the next day. The inside is mostly the same; however, in the front room, additional seating, in the form of a long bar, was added where a wall used to be.

What changed more was Lawrenceville, indeed, all of Pittsburgh. In late 2014, Spirit and Ace Hotel in East Liberty, comparably sized performance venues, didn’t exist. Now they do. Belvedere’s, in turn, has transitioned into what Toujours called a “straight dance club, but more on the slightly underground level.” Draft brews and fun entertainment are two keystones of Belvedere’s.

Toujours, who used his downtime to learn how to deejay, now hosts a Pop Rocks Night. The day of the week changes, but the theme is consistent: music from the past decade, juxtaposing MGMT with Miley Cyrus. ’90s Night with Sean MC and DJ Thermos is typically the first Saturday and third Friday of the month. Patrons should always check the club’s website to confirm event days.

Toujours tries to book ADMC, a Pittsburgh-based DJ, two to three times a month. ADMC hosts, among other events, a popular Dirty South Night, featuring southern hip-hop and R&B, though the date varies. Every Thursday, DJ Hatesyou 2.0 spins Neon ’80s Night. She blends the popular (Madonna, Prince) with the alternative (The Smiths, The Cure). There is plenty of one-off events too. Whatever the occasion, the finest DJs are always behind the laptops and turntables. Dracula and others get down for “Halloneon” on a recent ’80s night.

Concerts still occasionally happen at Belvedere’s. Several bands played there during the Rock All Night Tour (RANT), a local music festival that takes place every August. But given the crowds on dance nights, the events calendar is working out very well for the Pittsburgh hip.

Toujours concedes Belvedere’s Ultra-Dive is not as “dive-y,” what with the reconstruction, but because they still sell dollar beers, they can justify the Ultra-Dive part of their name. They also maintain low cover charges and an inviting atmosphere, no matter how much Belvedere’s or Lawrenceville may change.

“My favorite compliment we ever get at Belvedere’s is ‘everyone feels welcome,’ whether you’re in a suit or total ska punk,” Toujours said.

It all goes back to “You Are Beautiful.”

While living in East Los Angeles in 2000, Toujours spied this short declaration on a bumper sticker. He was playing in a band; on tour through Europe and Mexico, he and his bandmates would graffiti that message and its translations everywhere. A few years later, during a slow night at Belvedere’s, he made a stencil of his daughter holding a flag. Using spray paint, he transferred the image onto the wall next to Belvedere’s restrooms and added those words to the flag. The fire destroyed the original artwork, but he created a larger stencil for the wall by the dance floor. The message remains: “You Are Beautiful,” three words that the person at the door stamps on patrons’ hands as they enter. One thing the staff does not welcome is harassment, whether directed at the employees or their customers. This zero-tolerance policy predates the stencil to the reason Toujours was hired.

“Belvedere’s has been fighting [harassment] for 10 years and been treated like a black sheep because we were kicking people out who wouldn’t stop touching people without consent,” he said.

Those getting kicked out would often get aggressive; hence, his initial duty: to break up fights. He had a bone in his hand and a rib broken within three months of being hired.

Because of leaders like Belvedere’s, attitudes began to change. Now if he kicks someone out, he’s more likely to get cussed rather than punched. He’s also likely, believe it or not, to have a sober, hour-long meeting with the offender the next day to explain what is appropriate bar conduct, with both parties parting amicably. Other employees have had similar meetings with customers.

Thanks in part to Making Safer Spaces, a program offshoot of Pittsburgh Action Against Rape (PAAR), many nightclubs are following the practices Belvedere’s implemented over the past decade, such as posting anti-harassment signs throughout the venue. Patrons can now club hop feeling more secure.

If the atmosphere and dancing aren’t enough of a draw, Belvedere’s has Big Stage Karaoke Tuesdays. And on the last Saturday of the month, the bar becomes a roller rink for Down & Derby. Other daily activities include pool, darts, and pinball; there are five flat screen TVs too. If you’re just looking for a great watering hole, the beer selection balances domestic with international, national with regional. Belvedere’s has a $1 PBR special every Thursday from 9-11 p.m. Since its reopening, Belvedere’s is non-smoking. For those who don’t feel like dancing, pool is another popular draw.

Still, all of these attractions wouldn’t be nearly as enjoyable if it weren’t for the safe space that Misiaszek, Toujours, and the rest of the staff provide.

“We want to be a place that everybody can come to no matter your age, your size, or your gender, or your religion,” Misiaszek said.

Belvedere’s may be named after a palace, but there’s no elitism here.

Come one. Come all. Come as you are—for you are beautiful.

Christopher Maggio is a Pittsburgh-based writer and editor and loves ’80s nights.