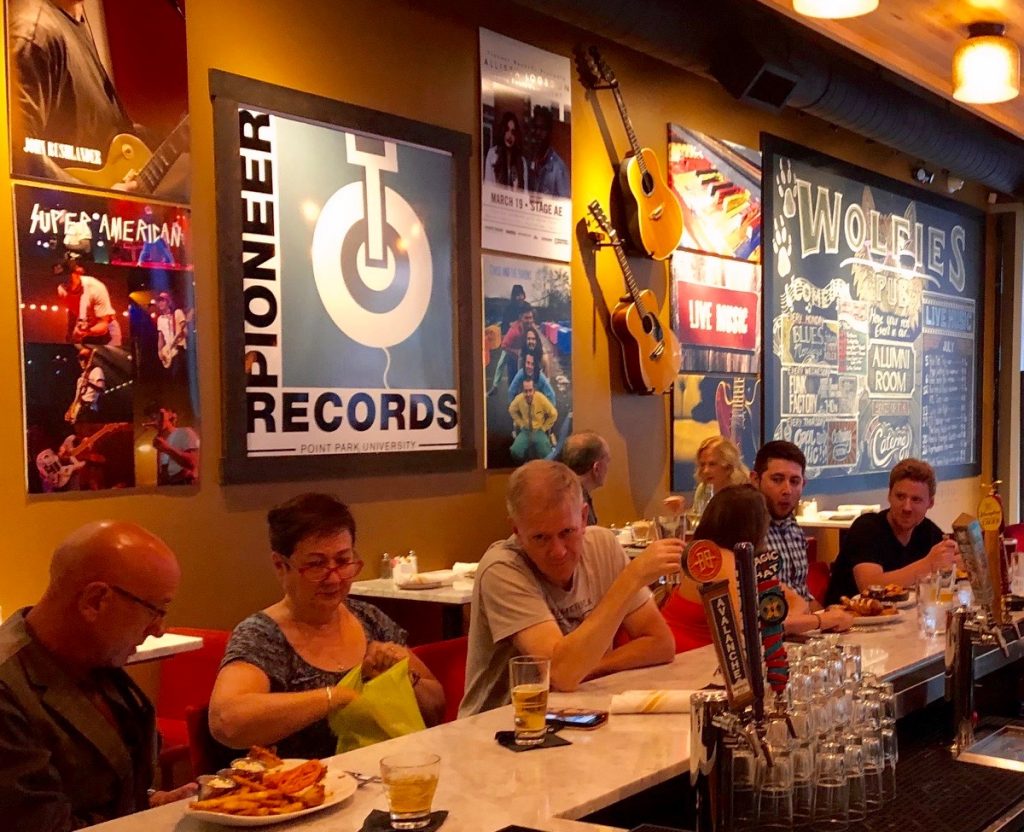 I wish more restaurants in Pittsburgh offered live music. We have plenty of venues for music and drink. However, what I want is a place where I can pop in, have a drink and some grub, and hear local musicians at no cover. The situation worsened when James Street Gastropub & Speakeasy closed in 2017. So when I heard about Wolfies Pub, which opened March 14, promising dining and entertainment downtown, I thought, “Now here’s something to fill that niche.”

My girlfriend and I arrived at 7 p.m. on Friday. As we sat ourselves at the already crowded bar, who should be leaving the restaurant but the original Houserocker himself: Joe Grushecky. I said hello, and we shook hands. The evening was off to a promising start.

The bartender promptly asked what we wanted to drink. I appreciate a good Manhattan, and the Miss King—made with Bulleit Rye, pomegranate syrup, chocolate bitters, Angostura bitters, and rose water—sounded similar. I ordered one for me and a French 57—made with Tanqueray gin, elderflower, lemon, and Prosecco—for her. 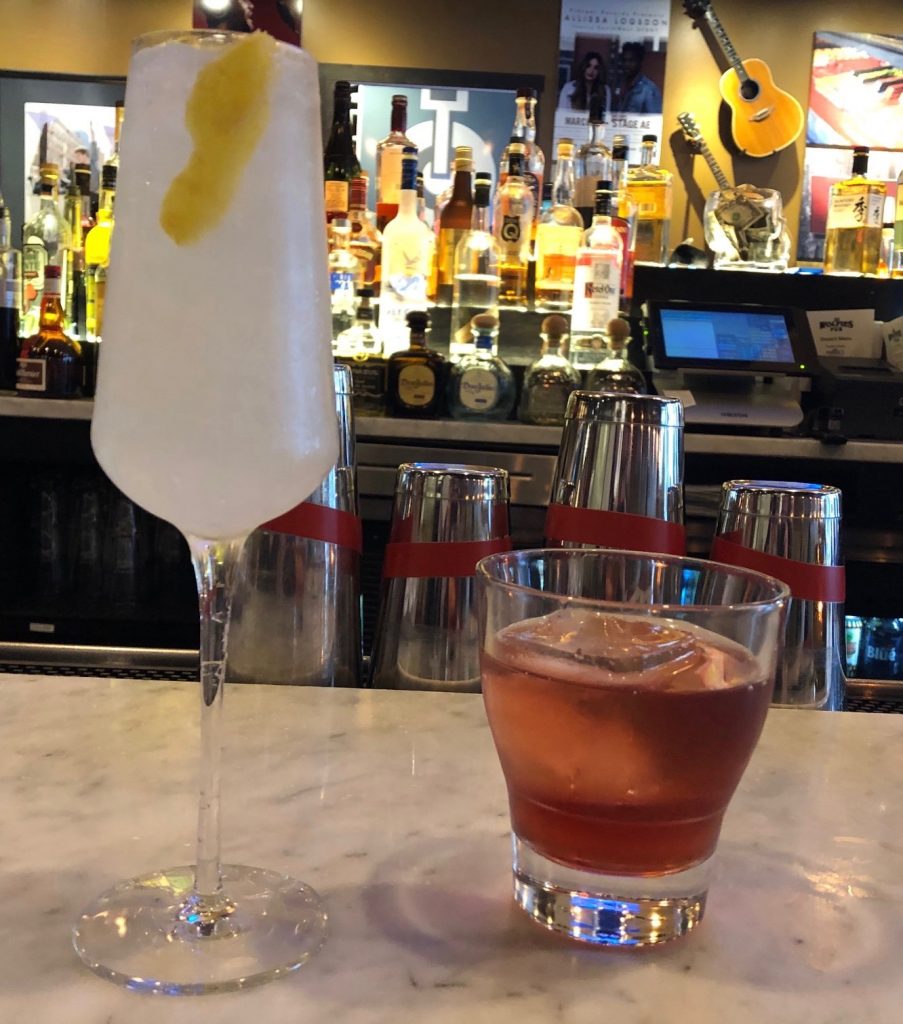 A French 57 in a champagne glass beside a Miss King in a tumbler glass.

As the bartender made our drinks, we watched the evening’s first performers, the Roger Humphries Trio. Humphries is also a Pittsburgh music legend, who has drummed with everyone from Ray Charles to Dizzy Gillespie. The trio’s jazz arrangements were intricate enough to draw us in but not so loud as to overpower the conversation. Max Leake played the keyboard, and Dwayne Dolphin was on bass. Fittingly, the last time that I saw the trio was at James Street.

Our drinks arrived. Her French 57 tasted sweet, but the elderflower was masked by the gin. The Miss King indeed tasted similar to a Manhattan but was smoother with a chocolaty aftertaste. Our cocktails were $10 each. Other ones go for slightly less. There’s also draft, bottled, and canned beer.

As we imbibed, we continued to chat and listen to the music. The trio closed its set with “Song for My Father,” a jazz classic. Humphries drummed on the original version with the Horace Silver Quintet. The version that evening was, unsurprisingly, impeccable with both Leake and Dolphin taking solos between Humphries’s deft drum fills. The song ended to applause.

Meanwhile, we had ordered some food. The queso blanco was a sizeable appetizer. One can order it with roasted poblano peppers or chorizo rojo. We opted for the former, which added some extra crunch to the tortilla chips but not too much spiciness. I would try the chorizo next time. 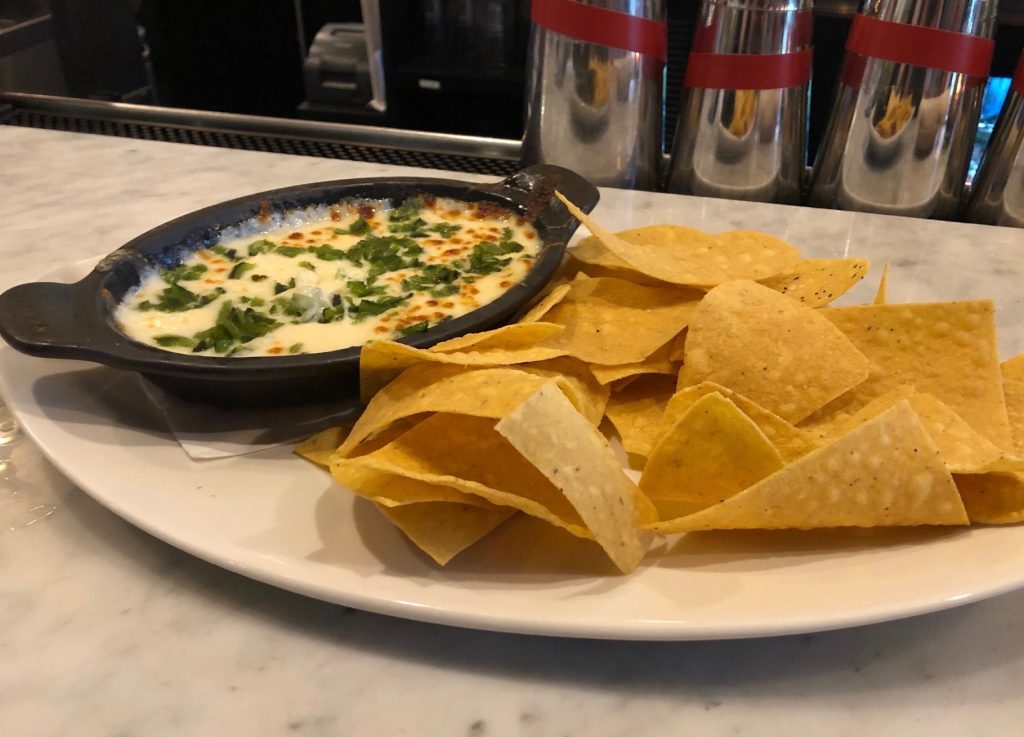 Poblano peppers add extra crunch to a bowl of queso blanco with chips.

Wolfies serves Etna’s Cop Out Pierogies, and my girlfriend ordered the potato and cheese. They were true comfort food.

Also comforting: my Turkey Devonshire, an open-faced sandwich laden with cheesy gravy and Parmesan and served on warm sourdough toast. The bacon was succulent, but we agreed the tomato and turkey was a little lost amid all that bread and cheese. (You’ll need a knife and fork for this one.) Fun fact: the Turkey Devonshire was invented in Pittsburgh by James Blandi, who owned the Park Schenley Restaurant and lived on Devonshire Street in Shadyside.

Our portions were generous, the service was excellent, and the silverware was spotless. We skipped dessert, but Wolfies sells Millie’s Homemade Ice Cream: three scoops for $6.99. A chocolate chip cookie ($4.49), a slice of molten chocolate lava cake ($6.49), and baked apple strudel ($6.49) were other options. We finished before the evening’s second scheduled performer, the George Heid Trio, another stellar jazz group.

MW Hospitality Group owns Wolfies Pub. The group also owns other downtown establishments, such as Molinaro and NOLA on the Square. Wolfies used to be Pirata, a rum bar.

“[Pirata] just wasn’t getting quite the foot traffic that they wanted,” Andrew Minton, the general manager of Wolfies, said. “So we started this as Wolfies, which was a little bit more accessible.”

Wolfie is the nickname of Bob Wolfinger, the proprietor, who also wanted to explore a connection with Point Park University. The downtown university isn’t officially affiliated with the restaurant, but both entities are helping each other.

Point Park University’s Pioneer Records hosts an open mic night every Thursday starting again in mid-September. In the back is the Point Park Alumni Room, which has some neat photographs from across the decades. Faculty, staff, alumni, and students get a 15-percent discount on food. Military gets a 20-percent discount too.

Certain menu items reflect the university’s history, such as the Liberated Grandmother (one draft beer, one whiskey shot, hard candies; $8), which is named after a book by Dorothy Finkelhor. She co-founded what was then the Business Training College and became Point Park College’s first president. (Speaking of libations, shout out to assistant general manager Jordon Phillips, who created many of the drinks.)

Just what I’ve been looking for.

Jimmy Adler plays the blues every Monday, and there’s live music five nights a week. Check Wolfies’ website for a complete line-up, including who is playing Fridays and Saturdays. 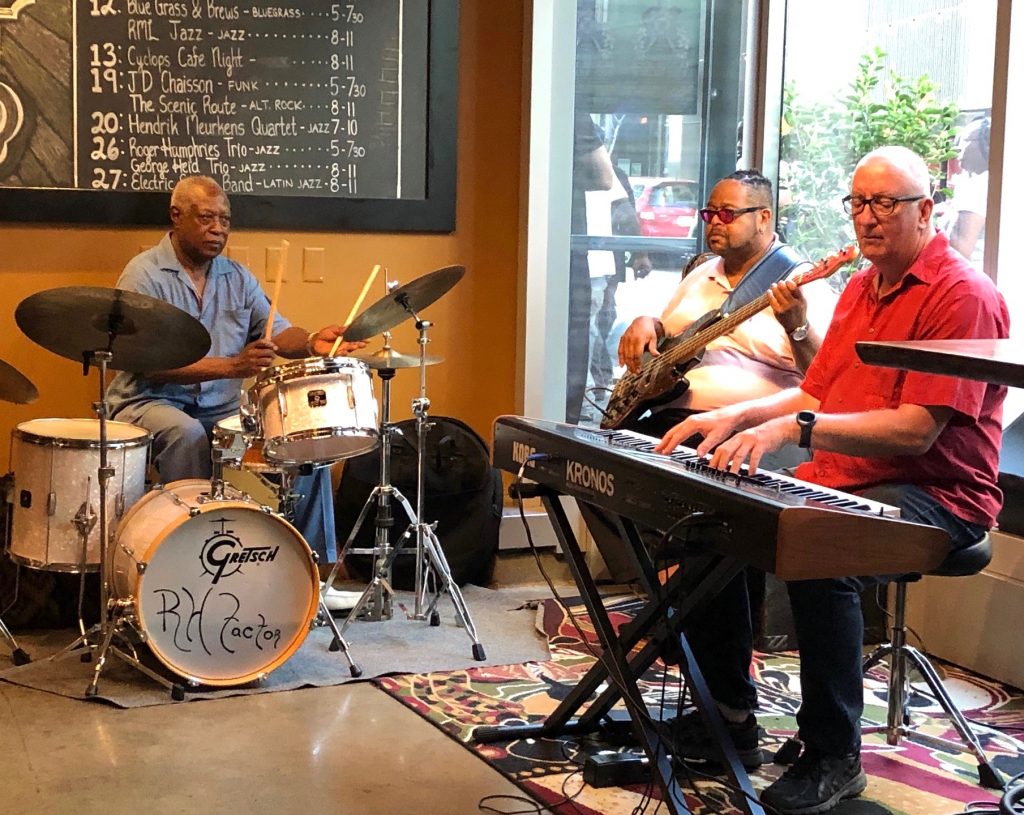 “Myself and Andrew are excited to be part of the resurgence of music downtown,” Phillips said. “Next spring, the Forbes Avenue sidewalk will be extended in width, and we will have extra room to add front patio seating.”

One can reserve a table online, and parking is available at the Market Square Garage at 228 Forbes Avenue. Those interested can also book a room for private events. Plus there’s a happy hour Monday through Friday from 4:30 to 6:30 p.m. and a selection of discounted food items. 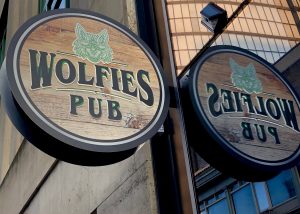