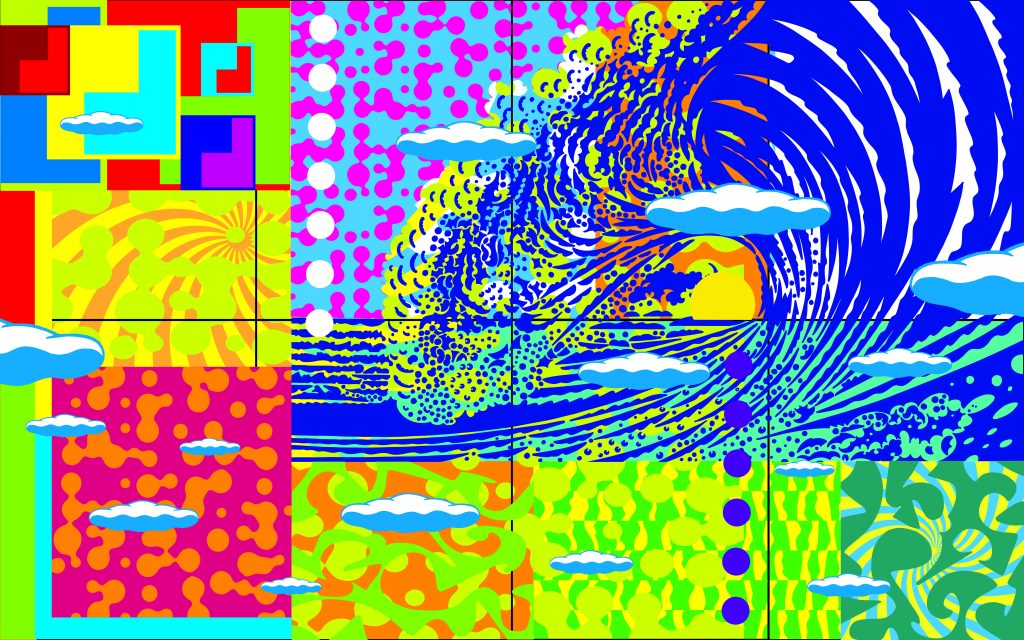 The illustrious artist John Van Hamersveld rode two waves early in his career. The first one quite literally involved waves—the California surfing craze of the early 1960s. The second was his work in the nascent rock and roll albums and concert industries. His art is the subject of an exhibit, Era of Cool: The Art of John Van Hamersveld, at The Westmoreland Museum of American Art through October 20. When you reach the exhibit room it pops right out at you with all the bright, bold colors of Hamersveld’s works.

The Art of Surfing 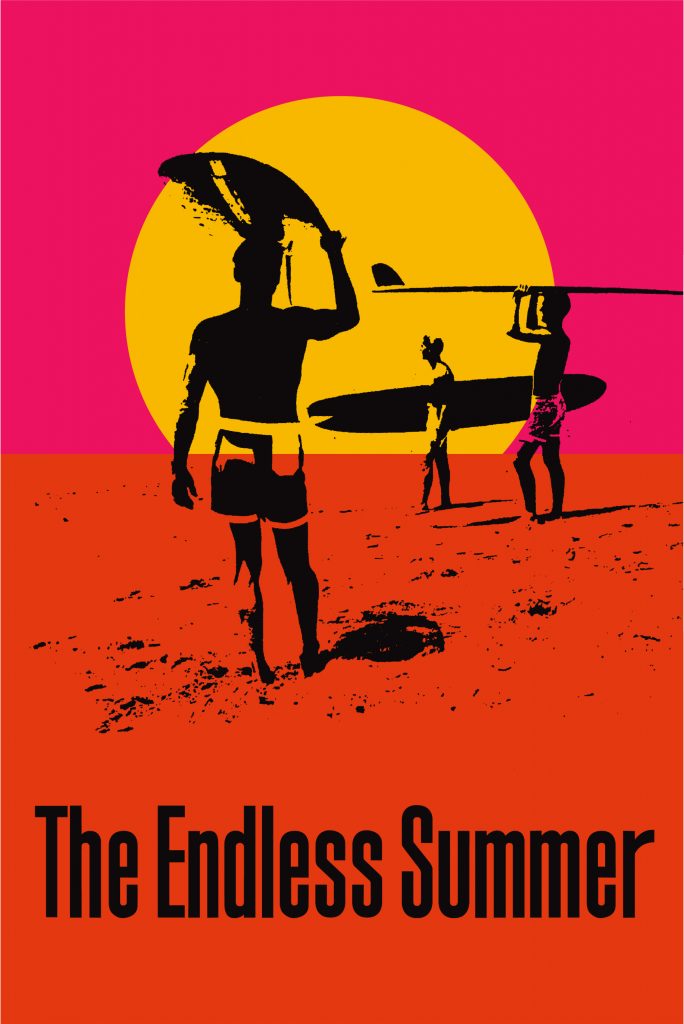 Van Hamersveld grew up surfing with his teenage friends in Dana Point, California. He took classes at the Chouinard Art Institute (now California Institute of the Arts/CalArts). His big break came when he designed a poster for the Bruce Brown surfing movie, The Endless Summer. The iconic design featured  three surfers on a beach with their boards and a large sun behind them. Day-Glo hues of red, pink and yellow with black type make it a vivid design.

Van Hamersveld starts his designs by creating a drawing using a black Pentel or Sharpie on white paper. He then scans it into his computer where he creatively adjusts the colors for just the right amount of saturation and vibrancy. Apple co-founder and friend, Steve Jobs, gave Hamersveld his first computer in 1983. This, he said, allowed him to take his designs into a fourth dimension. Van Hamersveld has also gone back to drawing without the computer at several points in his career.

The Endless Summer poster led to more surf designs, which continue to this day, including a large mural on a building in Hermosa Beach. The exhibit has a design that he did for Billabong, the surf clothing and accessories company, and an actual surfboard with a very colorful and fun abstract design on it. It almost looks like it has psychedelic spinning targets incorporated into its playful look. According to the museum’s information for the show, Van Hamersveld “thinks of his drawing like surfing in a way, ‘Lines on paper are like surfers on waves.’” 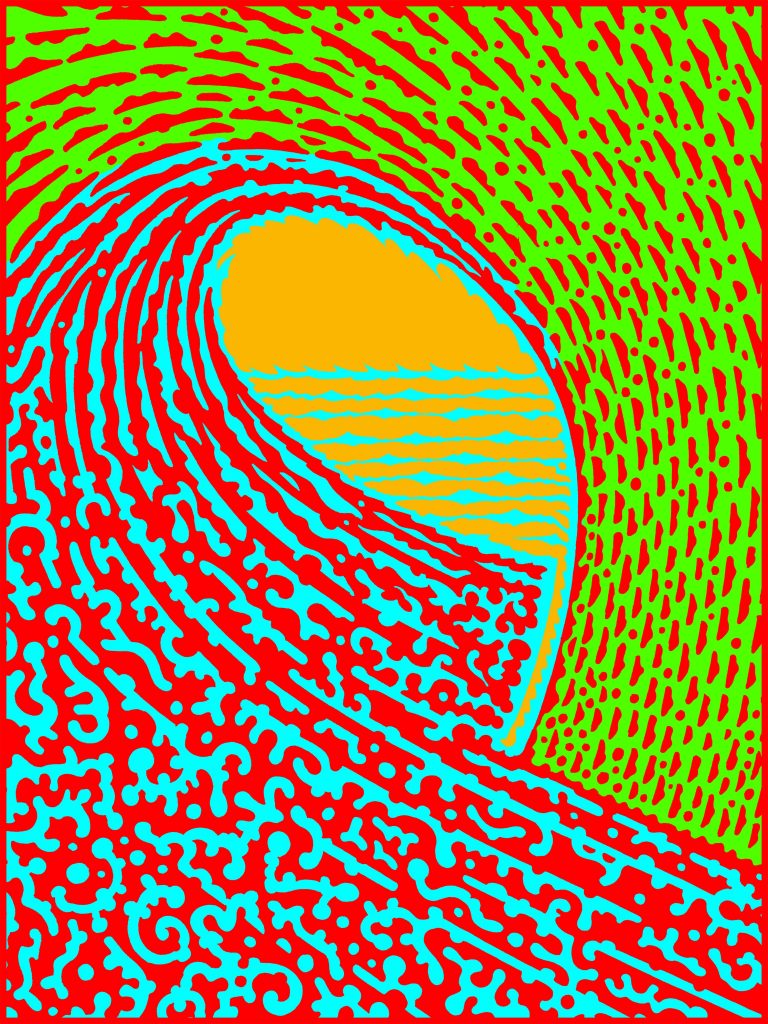 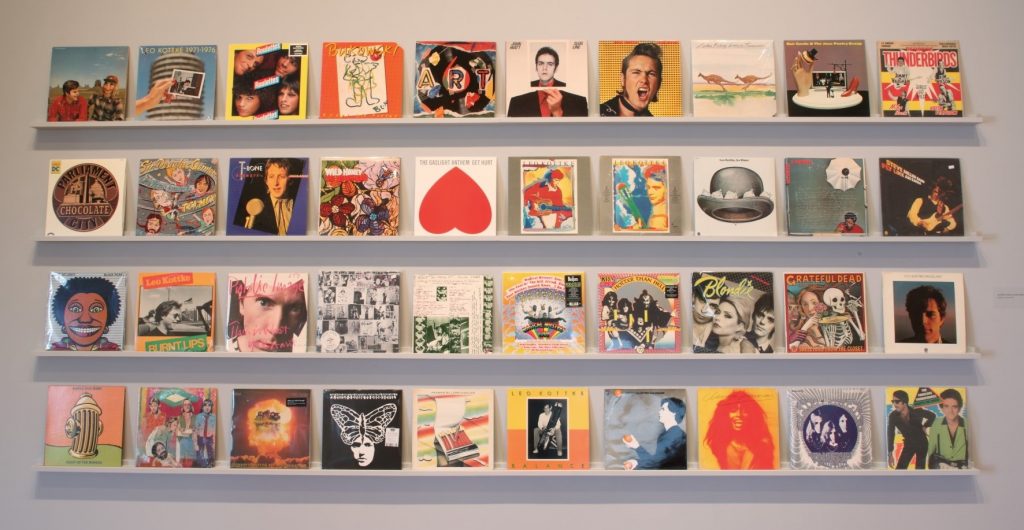 Attention that Van Hamersveld garnered from The Endless Summer poster and other early works landed him a prime job as Capitol Records’ head of design from 1965 to 1968. While there he designed the album covers for The Beatles’ Magical Mystery Tour, The Beach Boys’ (of course!) Wild Honey, and many others. After the success of his Magical Mystery Tour design he left Capitol to go out on his own. He would design over 300 albums in his career including: Exile on Main Street by the Rolling Stones, Skeletons from the Closet by the Grateful Dead, Hotter Than Hell by Kiss, Eat to the Beat by Blondie, and Fly Like an Eagle by The Steve Miller Band. The Era of Cool exhibit features a wall of album covers designed by Van Hamersveld. It’s fun to see which ones jump out at you from your past. There’s also a smaller graphic representation of many more album covers that he created.

Another aspect of his rock and roll art career are concert posters he created for concerts he coproduced with his partners in Pinnacle Productions and other promoters. On view at The Westmoreland are posters for Jefferson Airplane, Jimi Hendrix, Bob Dylan, Eric Clapton, and Steve Winwood. You can see more of his posters and works in a smaller photo representation which gives a broader perspective of the artist’s various designs.

Other highlights of the show are an official poster Van Hamersveld produced for the 1984 Los Angeles Olympics. It’s done in a more retro, classic style, but is still a standout piece. There’s also a large, very impressive multi-panel piece, “Bambi Wave Mural Master,” which features a big wave, clouds, and various colors and patterns. A regular-sized work, “The Next Wave,” features a colorful psychedelic wave breaking. It almost gives one a hypnotic strobe effect when looking at it. It’s interesting to see all the geometric designs that compose this work. There’s a large display of one Native American face done in 12 panels in 12 different styles. It’s evocative of Andy Warhol’s work and very striking for several reasons. 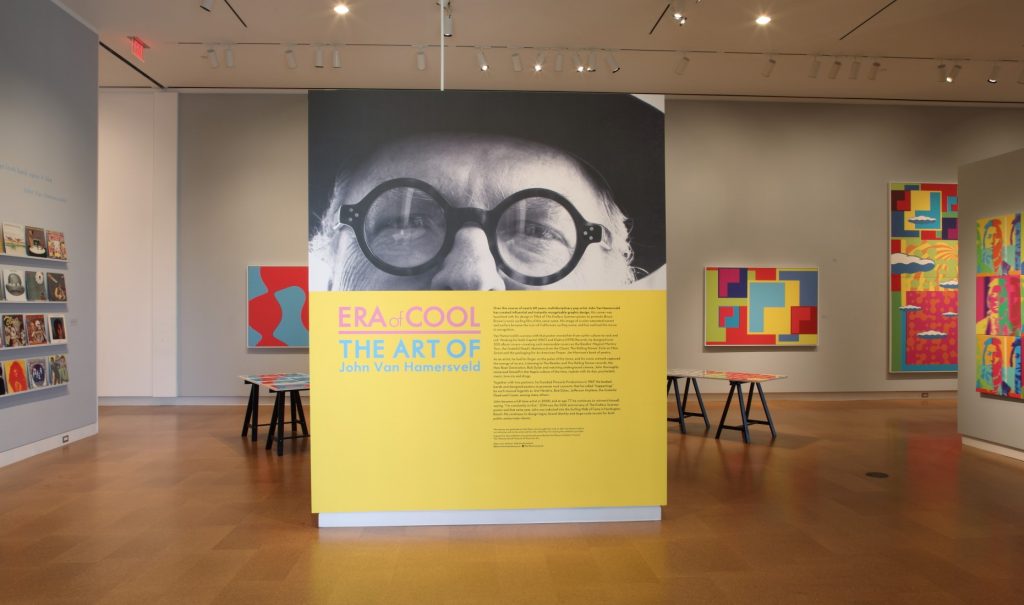 Van Hamersveld has said that he was influenced by Warhol’s work. He would meet Warhol in 1967, and ten years later he was asked by Warhol to design the poster for his Bad film. Van Hamersveld also pays homage to M.C. Escher, Japanese printmakers Katushika Hokusai and Utagawa Hiroshige, and the English artist Aubrey Beardsley. Now Van Hamersveld is influencing younger designers including Shepard Fairey, who created the noted Barack Obama “Hope” poster in 2008. There’s a video viewing station in the exhibit and in one of the videos, Fairey is interviewing Van Hamersveld and says that he is his favorite designer and biggest influence. Another highly interesting video is “Signs of Life.” It is done by Hamersveld with designs and music from the 1960s psychedelic era for Las Vegas’s Fremont Street Experience. 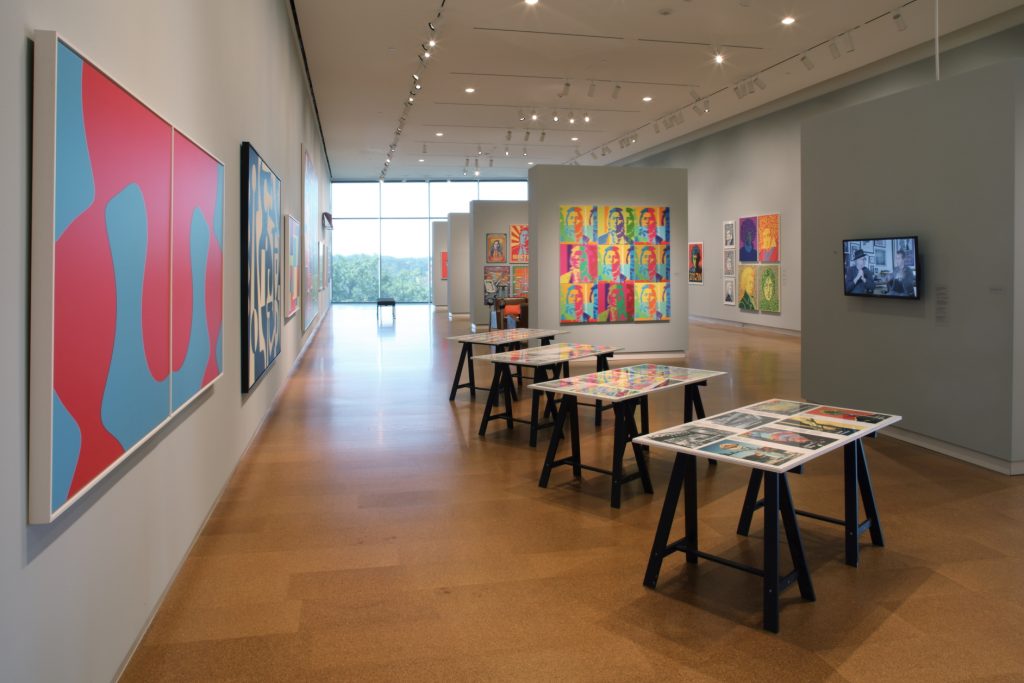 Anne Kraybill, the Richard M. Scaife Director and CEO of The Westmoreland Museum of American Art, said, “We are excited to open Era of Cool: The Art of John Van Hamersveld. Over the past five decades, Van Hamersveld has created a wealth of instantly recognizable graphic design. We invite visitors to experience the eye-pleasing alchemy created when pop culture, music, and visual art converge.” On Wednesday, October 2, from  7 to 8 p.m., Chief Curator Barbara Jones will speak with John Van Hamersveld about his art and career in a ticketed event. In addition to Jones, curatorial assistant Bonnie West also worked on the Van Hamersveld exhibit.

The adjoining Post 1950s Gallery has a  collection of interesting works by prominent artists, in styles from minimalism to pop. John Harvey McCracken’s “Cosmic Voyage” is a blue acrylic rectangular monolith standing six feet tall and reminiscent of the monolith in 2001: A Space Odyssey. Mickalene Thomas’s “Shug Kisses Celie”—multi-layered painting with two people in it, composed of silkscreen, ink, and acrylic on an acrylic mirror—has a certain holographic feel. There’s even a Thaddeus Mosley wood sculpture made of walnut and cherry, called “Cloud.”

The Westmoreland’s other exhibits are interesting as well. A centrally located gallery in the building has about a 25- to 30-foot ceiling. It displays mostly gold-framed artwork hung nearly all the way up. Wilderness landscapes, industrial mills, and workers are the main subjects of the art in this room with many spectacular works. Other highlights of the main collections are sculptures, furniture, commercial pottery urns, and other paintings. The floor staff are all very nice and helpful. Admission and parking are free.