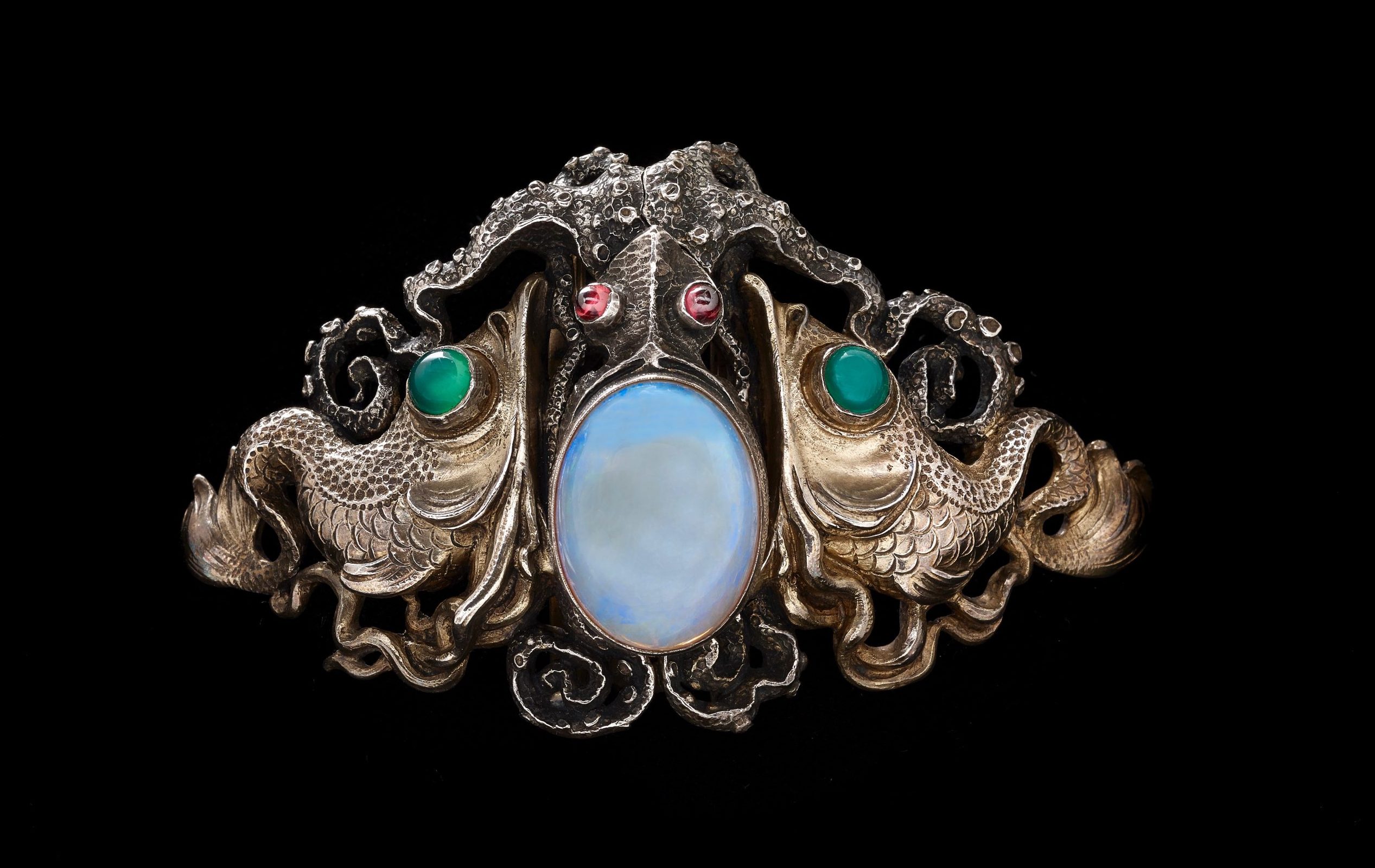 Deep-sea drama abounds in the ‘Octupus Waist Clasp’ made by Wilhelm Lucas von Cranach around 1900. It is one of a staggering 218 pieces in the ‘Maker & Muse’ show. (photo: John Faier, © The Richard H. Driehaus Museum)

When society hit the pause button in March, Pittsburgh’s Frick Art Museum was only partway into its run of a special traveling exhibition. Luckily, the show doesn’t yet have to move on. Lovers of vintage fine-art jewelry can visit Maker & Muse any time from August 15 (the Frick’s reopening day) to September 27.

The exhibition is beautiful. To cite further adjectives, it is intricate, elaborate, and—pun intended—multifaceted. It’s a big show consisting of many small pieces: 218 in all, arranged in glittering groups and displayed beneath plexiglass to keep relationships with viewers platonic. There are neckpieces woven in breathtakingly fine filigree. There’s a bracelet so encrusted with stones and metalwork that the wearer could probably get in an arm day just by waving to friends at the opera.

All the jewelry is handmade from original designs. The pieces date from about 1880 to around 1930, and along with reflecting a range of styles, they tell intertwining sets of stories. The show is titled Maker & Muse because during this time, women came to play dual roles in the world of art jewelry. In addition to wearing it and serving as inspiration for it—the muse part—they increasingly took part in the design and making. The exhibit includes work by a cavalcade of notables.

From Savile Row to Chicago, a Gem-Spangled Road

Charlotte Newman, who started as a jeweler’s assistant in London in the 1860s and by the 1880s had her own studio, with men working for her, has been called a woman who “paved the way for the women who paved the way.” Her striking designs were often reminiscent of ancient jewelry and her maker’s mark, engraved discreetly on pieces she made, was “Mrs N”.

While Newman flourished in her shop on London’s elite Savile Row, younger female jewelers began to emerge. Some worked in married-couple teams, like Edith Dawson and her husband Nelson. In some enameled silver pieces attributed to the Dawsons, hues of green and violet are prominent, which may suggest more than aesthetic preference. Green, white, and violet were the colors of the British women’s suffrage movement; the letters g-w-v were said to stand for “give women votes.” 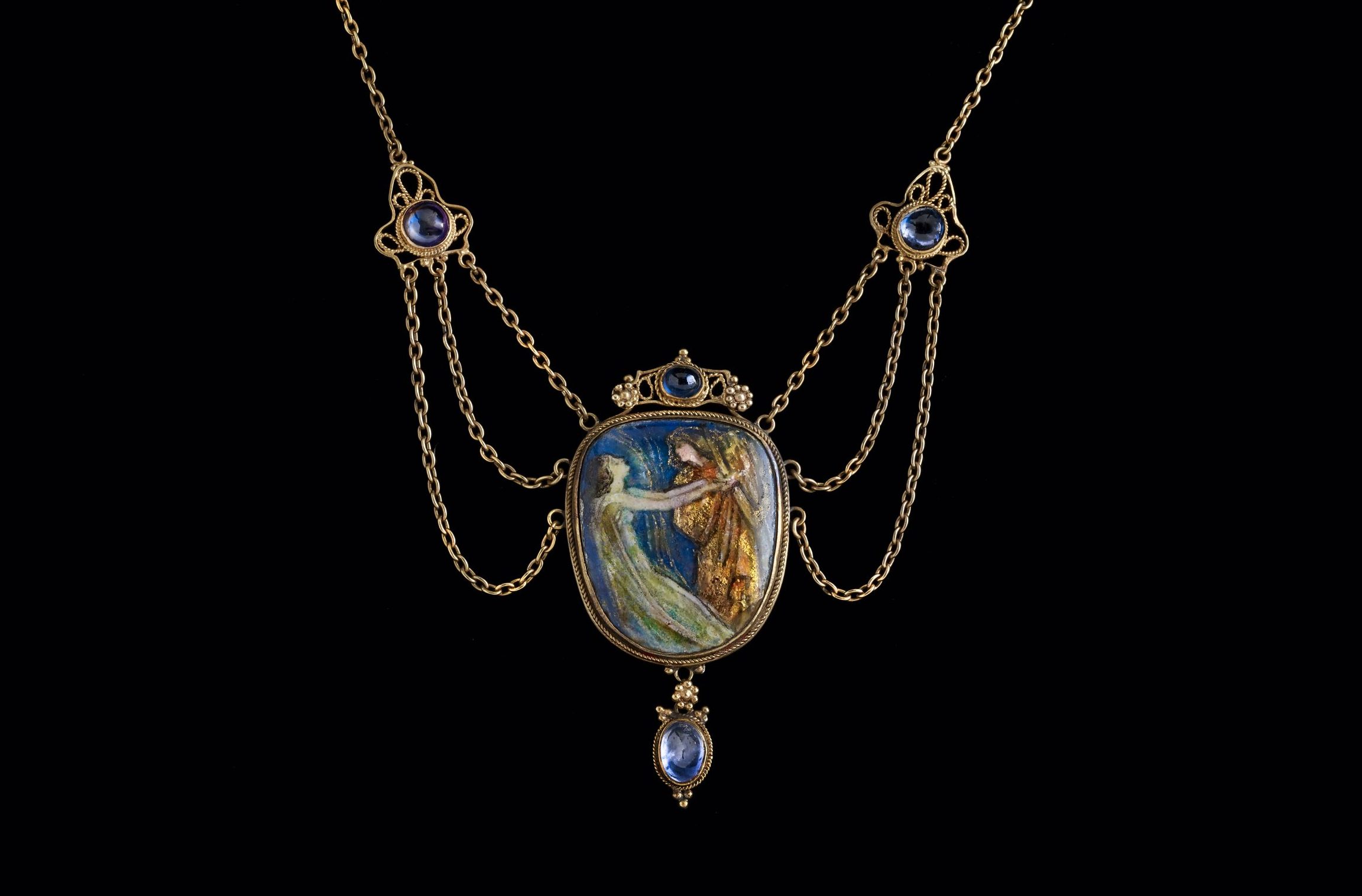 Inspired by Arts and Crafts principles, this necklace is attributed the Guild of Handicraft in London circa 1900. The overall design is ornate but has a palpable unity and the enameled image evokes days of yore. (© Artists Rights Society / ADAGP. Photo: John Faier, © The Richard H. Driehaus Museum.)

A heady swirl of artistic and social movements intersected in the years before and after the turn of the 20th century. Artists of the Arts and Crafts movement sought to revive traditional handwork and materials-conscious design, in reaction to the perceived ugliness of Industrial Age mass production. Many in the movement also advocated socialism and/or societal reform. A good bit of their jewelry—including pins, clasps, and buckles—was designed to go with simple, flowing, medieval-style garments, worn by rebellious women who didn’t want to stuff themselves into the era’s fussy, woman-as-parade-float fashions.

And gradually, rising amid the ripples of the Arts and Crafts movement, came the sensuous, swirling lines of Art Nouveau. One pivotal female jeweler was Ella Naper. Reportedly, more than a few contemporary women have singled out Naper’s exquisite “Lily-Pad Hair Combs” as pieces in Maker & Muse that they’d love to wear today. 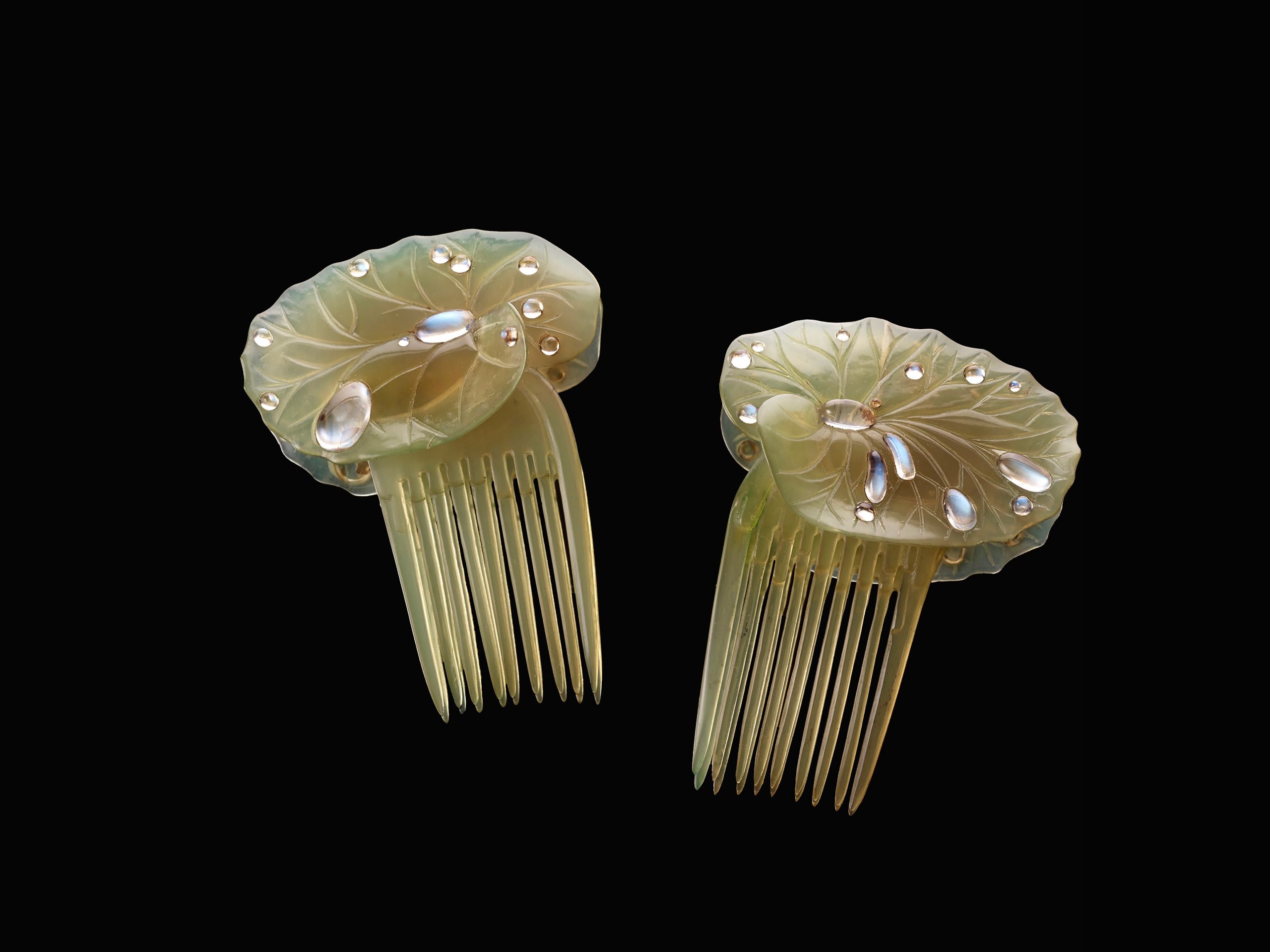 It is possible to be stunning and subtle simultaneously. British artist Ella Naper made her ‘Lily-Pad Hair Combs’ from horn and moonstone circa 1906. (photo: John Faier © The Richard H. Driehaus Museum)

Still, most art jewelers of the time were men. Their work makes up the majority of the show, with classic names well represented. René Lalique was an early master of Art Nouveau—he had work displayed at the Maison de L’Art Nouveau in Paris, the gallery that gave the movement its name—and another fan favorite at The Frick is Lalique’s “Winged Sylph Brooch,” crafted in the form of an airborne nude woman with butterfly-like wings billowing from her back. The sylph actually looks more as if she’s dangling from a Nouveau parachute but the effect is thrilling nonetheless.

Speaking of men, one must certainly speak of Lewis Comfort Tiffany. Visitors hoping to see a Tiffany lamp won’t be disappointed; a gorgeous lamp adorns a corner of the exhibit. Tiffany jewelry is the main focus, however, and it is interesting to learn that women co-designed or flat-out designed many of the goods. For over 30 years Julia Munson, and later Meta K. Overbeck, oversaw the making of jewelry at Tiffany & Co. in New York.

Meanwhile, women in Chicago established their own vanguard. Clara P. Barck opened the renowned Kalo Shop there in 1900, and Maker & Muse features both art jewelry and fine silverware designed by her “Kalo girls” over the next three decades. Some exhibition guests of sufficient age may even recall visiting The Kalo Shop. It had a long life, finally closing in 1970. 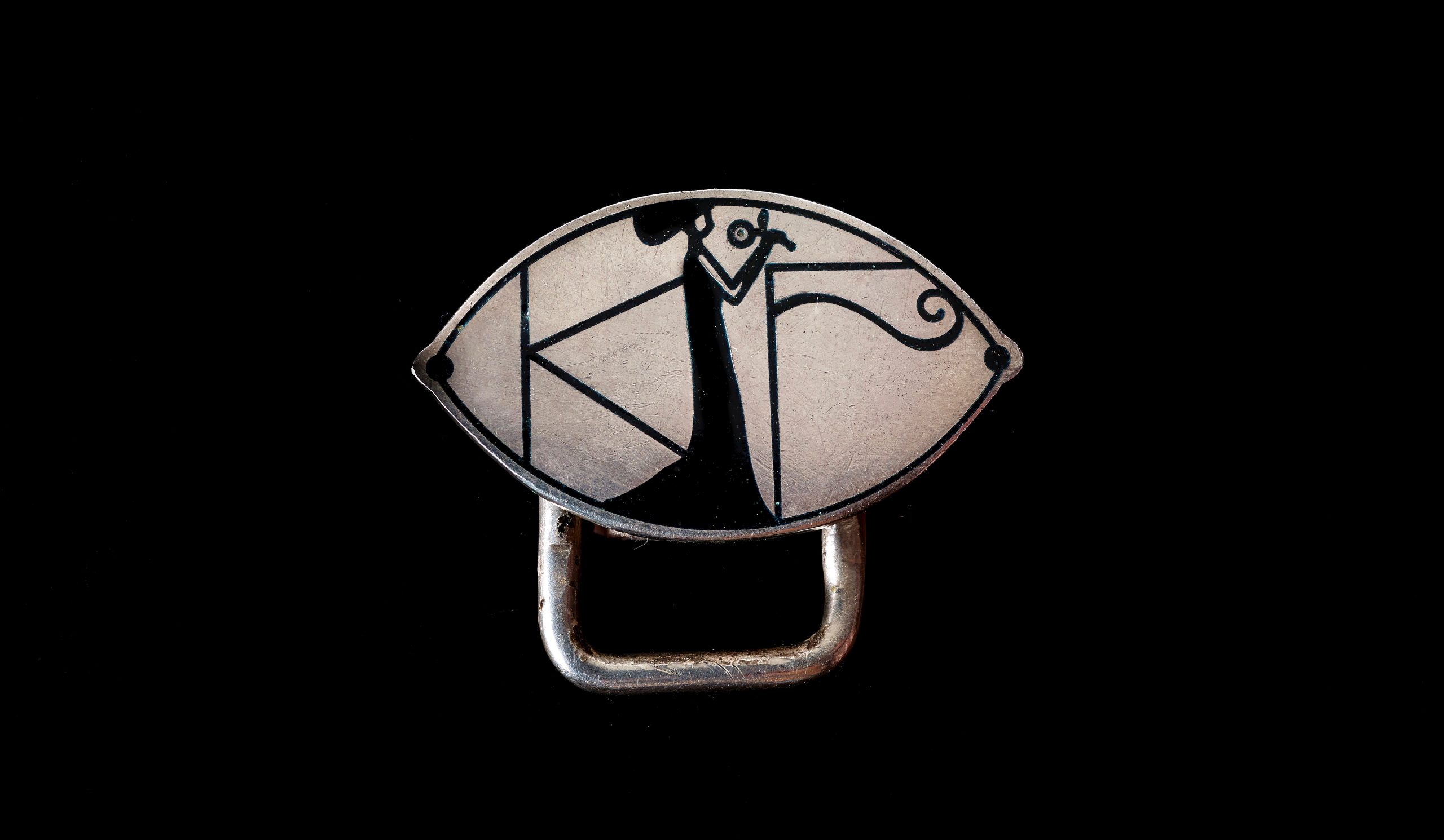 This hostess pin, made by Josef Hoffmann and Berthold Löffler in Vienna around 1903, embodied a new artistic vision. The piece wakes visual echoes of ancient times while showing a sleek modern woman in a geometric setting. (photo: John Faier, © Driehaus Museum)

The show includes much more work in various styles by other intriguing artists. Here, I’ll mention only to check out the pieces done by Austrian and German jewelers of the Jungendstil (Youth Style) movement, wherein you can see bridges to our current design world: modern, but eclectic. For additional commentary and more cool pictures, try the virtual tour of Maker & Muse.

Sarah J. Hall, former chief curator at The Frick Pittsburgh and no slouch in the wit department, summed up the exhibit nicely. “It’s bling plus idealism” she said in a March interview, noting how the dazzling designs of the period converged with currents aimed at liberating women and improving art and society generally. Bringing Maker & Muse to Pittsburgh turned out to be one of Hall’s last major achievements in her 26 years at The Frick. She left in June to become director of the Washington County Museum of Fine Arts in Maryland. But her advice on touring the vast arrays of jewelry in Maker & Muse remains worth a listen.

“I think it’s impossible to look at every piece,” Hall said—there are too many plexiglass cases with multiple items per. So: “Go to a case, pick two or three things that catch your eye,” and spend some time with them, she suggested. Read the text panels. The words tell a story one way and the jewelry tells it another. Let them merge, said Hall, and you may find what she has found: “Each piece is its own exhibition.” 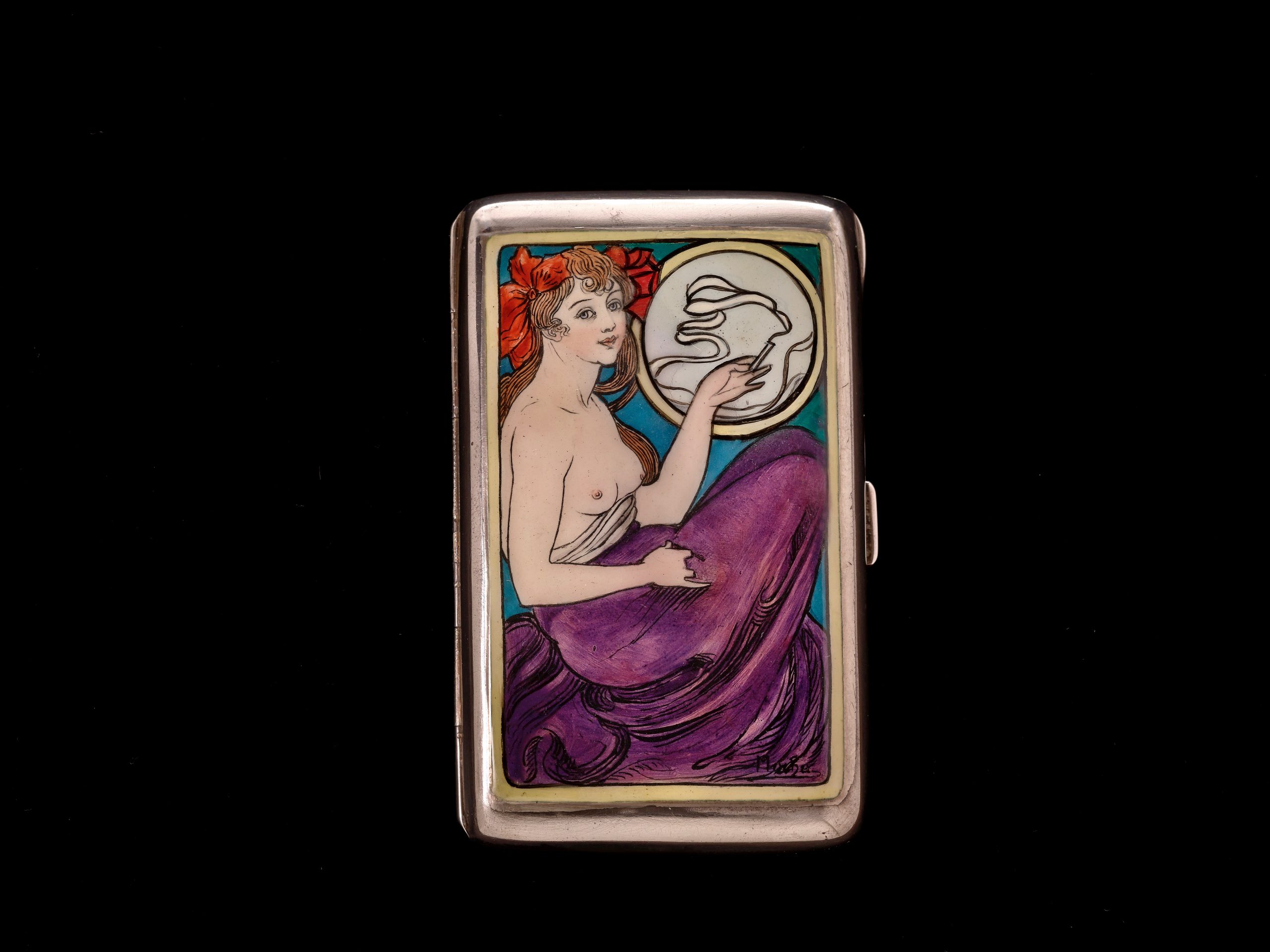 Czech artist Alphonse Mucha was known for epic paintings and florid Art Nouveau posters. He also felt that the muse on a silver cigarette case should have a ciggie of her own. (photo: John Faier, © The Richard H. Driehaus Museum)

Maker & Muse was curated by jewelry historian Elyse Zorn Karlin for The Richard H. Driehaus Museum in Chicago. Founded by the present-day investment manager and philanthropist of that name, the Driehaus Museum is housed in a renovated 1883 mansion where Maker & Muse premiered in 2015. Nearly all pieces were collected by Driehaus himself.

The showing in Pittsburgh carries a $15 admission fee. If you’re going, try also to see the Frick Art Museum’s permanent collection and the adjacent (free admission) Car and Carriage Museum, with its fascinating collection of buggies and early automobiles.

Maker & Muse is subtitled Women and Early Twentieth Century Art Jewelry, though late 19th-century items come with the package. Through September 27 at 7227 Reynolds St., Point Breeze. Advance reservations for entry-timed tickets are required and available three days prior. The Frick is providing special access to members and essential workers (no proof necessary, they will take essential workers at their word) for the first week of reopening (August 15 – 21) with free timed tickets. You can reserve on the The Frick’s website or call 412-371-0600. That’s also how to get further information … which will surely include “Wear a mask and practice social distancing.”

The Frick Art Museum and the Car and Carriage Museum will reopen to the general public on Saturday, August 22 with timed tickets available three days in advance of visit.