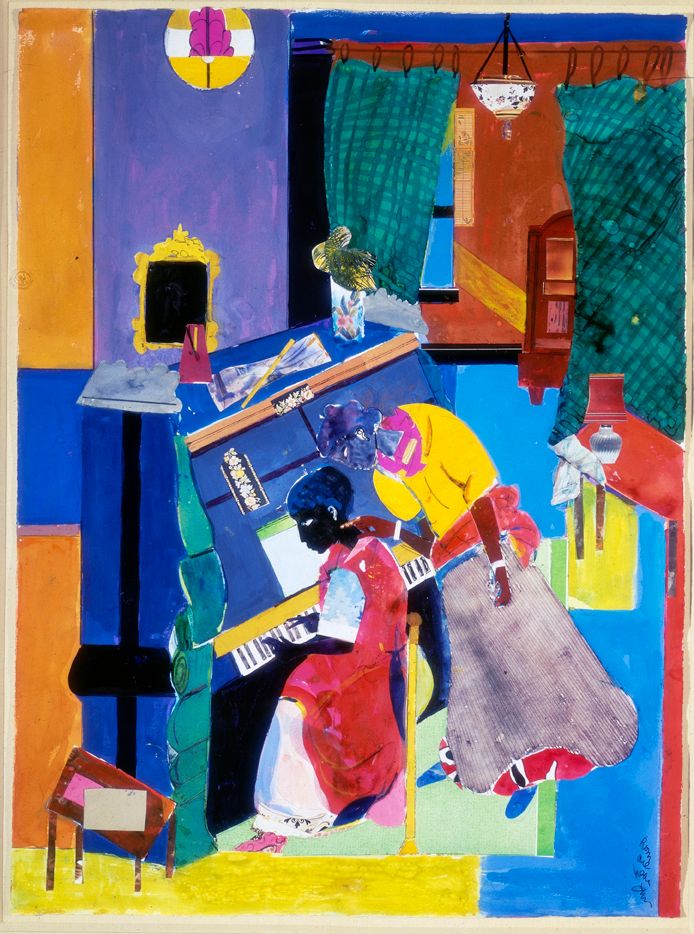 Of the many visual artists associated with Pittsburgh––if you’re a native, you know who they
are––Romare Bearden is recognized for his matriculation at Peabody High School (’29) when
he learned to draw. To be clear, the school gave no instruction; it was a neighbor and boyhood
friend, Eugene Bailey, who did. Not born in Pittsburgh, in fact, Bearden spent just a few
summers visiting his grandparents, and then resided here for three years with his maternal
grandmother in her boarding house in East Liberty. Yet, those were formative years, and
Bearden’s Pittsburgh memories of his adolescence would figure prominently in his life’s work.

An appealing cross-representation of that work is now on exhibit at The Frick Art Museum until September 18. The diversity of the media in which he worked––cartooning, oil, watercolor, screenprint, and, most famously, collage––is astounding. But what truly and deeply impresses the visitor is a revelation that comes upon reading the interpretation of the last few works in this well curated show. The revelation will appeal to every die-hard Pittsburgher. To expound upon it here would be akin to describing the anticipation of exiting the Fort Pitt tunnel and seeing all of downtown
on a beautiful day. You just have to experience the “wow” for yourself.

An only child, Bearden was born in Charlotte, North Carolina. His full name was Fred Romare
Howard Bearden. Romare is pronounced ROH-mer-y. His father, a sanitation engineer, and
mother, a writer, newspaper editor, and an activist for the Negro Women’s Democratic
Association, moved to Harlem almost upon Romare’s birth, arriving in plentiful time to
participate in and help nurture the Harlem Renaissance. It is said that young Romare met and
mingled with the likes of W.E.B. Du Bois, Fats Waller, Paul Robeson, Duke Ellington and other
visual artists like Charles Alston and Aaron Douglas. But it was not until he was at Boston
University when he decided he would pursue his love of visual arts. There he learned to write
and draw political cartoons. While at New York University, from whence he ultimately graduated
in 1935, he also worked for Collier’s magazine and the New York Evening Post.
In short time,

Bearden joined several Black artists associations like the 306 Group and, later,
the Harlem Artist Guild. He also attended the Art Students League. Yet, like so many hungry
artists, Bearden had to find employment outside of his passions, and he became a caseworker
for the NYC Department of Social Services. Except for a stint in the Army during the war,
Bearden would not retire from the department until 1969.

A student of philosophy, Buddhism, jazz and French, Bearden was foremost a visionary whose
work expresses the strife and strain of Black America. As early as 1934, he wrote in The Negro
Artist and Modern Art:

“…if it is the race question, the social struggle, or whatever else needs expression,
it is to that the artist must surrender himself. An intense eager devotion to present
day life, to study it, to help relieve it, that is the calling of the Negro artist.”

Of his role as activist in the Civil Rights movement, he presciently wrote, “Do everything in your
power not just to protest a failed world, but to depict one where community responsibility and
love are real.” The passion of the artist is wisely expressed through the exhibition’s
interpretation, which is not to suggest that his work would otherwise lie flat. Bearden’s play of
texture, pattern, color and composition is purposeful and stunning in whichever narrative his
work depicts.

Fascinating, too, are his use of symbols, repeated as often as the narrative commands. In some
works, a basket of laundry represents the ever present, ever-demanding necessity of work. In
other works, it is a rooster that roots the story to agrarian toil. In many, a train chugs in the
distance, giving hope to the Great Migration north. 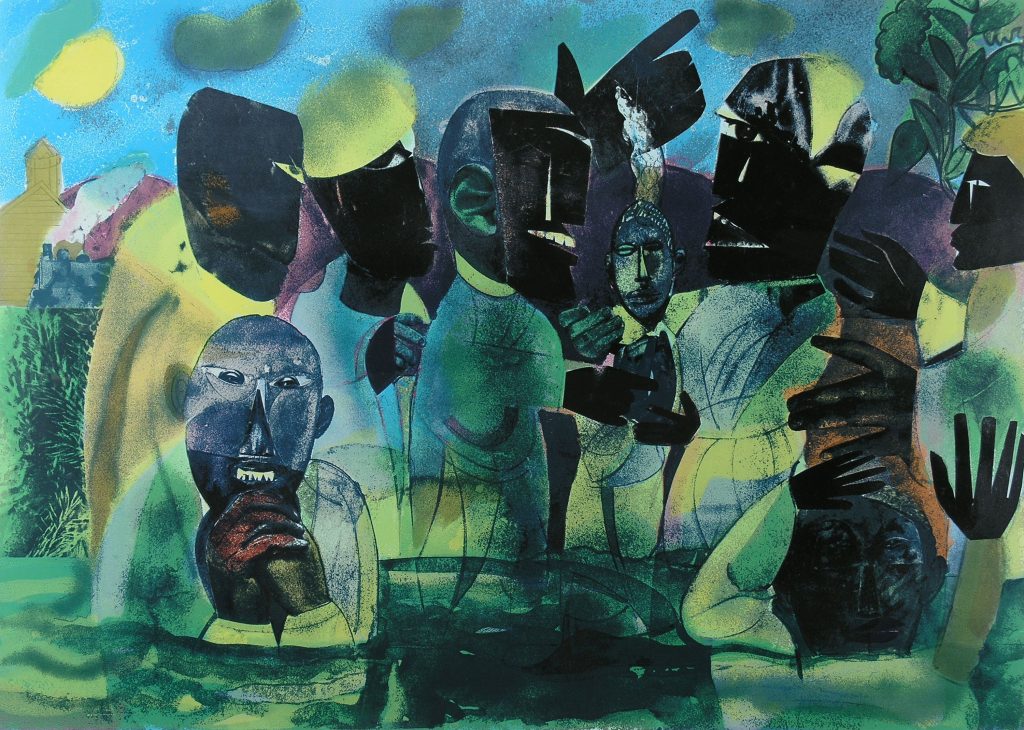 In one particular screen print, The Baptism, 1975, Bearden shares his memories of southern
ritual and community, giving us a glowing depiction of redemptive energy, strength and wonder.
The print is intensely green, the color of rebirth, cleverly achieved through both screen printing
and washes of watercolor on top, a technique much associated with his print collages. The
images are both fluid and sharp. They stand in testimony to his own words, “I never left
Charlotte except physically.”

At The Frick, we are treated to political art, religious tableau, even children’s books. Surprising
are his contributions to the mainstream; he designed the cover of TV Guide when Alex Haley’s
“Roots” first aired in 1977, and, earlier, he wrote music recorded by Pittsburgh’s own Billy
Eckstine.

Which leads us, by example, to learn something more about Bearden’s affinity with our beloved
city. For an artist to have so well captured the Black experience of 20th century America, for one
who spent few, but precious years in our celebrated city, for one whose mural in the Gateway T
station today depicts our shared industrial history, he, deeply inspired by a Black creative class,
inspired others whose names will forever be associated with Pittsburgh. Our city owes him a
deep debt. 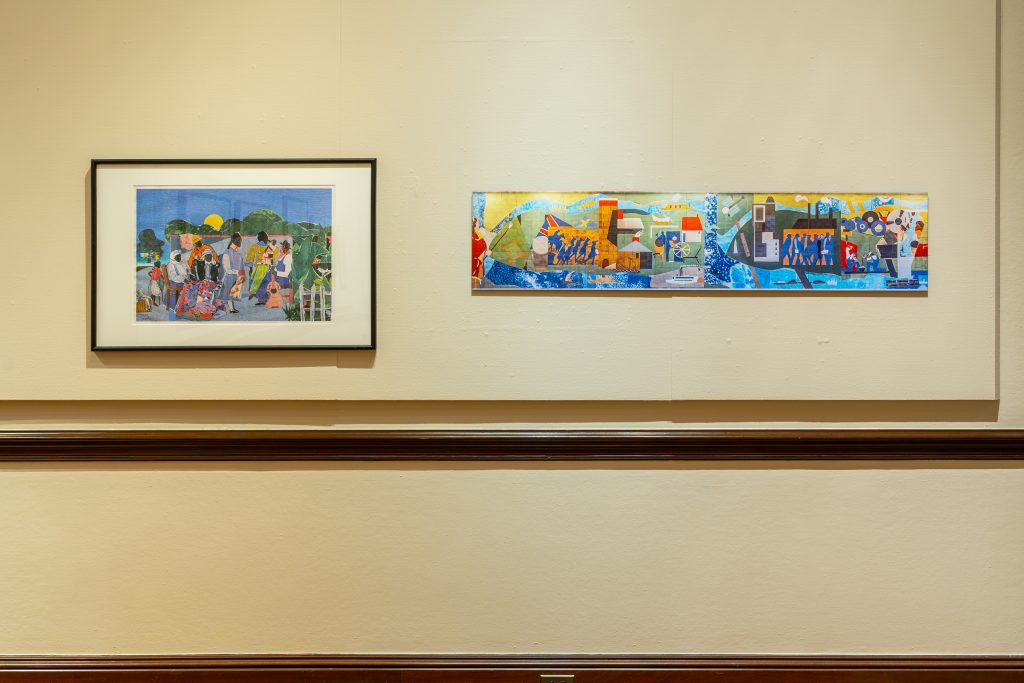 Several of the many Romare Bearden art works at The Frick.

The Bearden exhibit at The Frick Pittsburgh at 7227 Reynolds Street in Point Breeze is open through September 18. Please check their website for hours and admission prices.

C. Prentiss Orr will release his latest narrative history, The Surveyor and the Silversmith, this
fall. He is also a co-author and the principle editor of Pittsburgh Born, Pittsburgh Bred; 500 of
the More Famous People Who Have Called Pittsburgh Home.