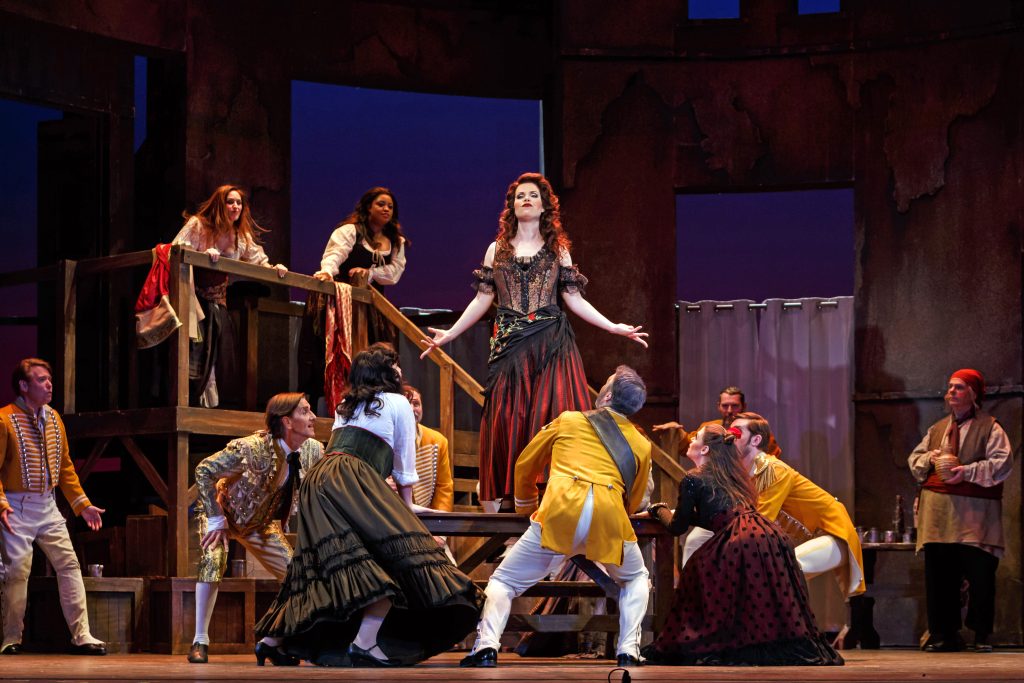 Carmen (Zanda Švēde) enjoys being the center of attention in Pittsburgh Opera’s prodcution of ‘Carmen.’

Being a beautiful and charming woman can be a double-edged sword. On the one hand you attract much attention and praise, but on the other hand some admirers can become obsessive. Such is the case in Pittsburgh Opera’s Carmen, onstage at the Benedum through April 3.

Carmen is an opera in four acts by French composer Georges Bizet. The libretto was written by Henri Meilhac and Ludovic Halévy, and is heavily influenced by the novella of the same title by Prosper Mérimée. It was first performed in Paris in 1875.

Carmen, a beautiful Roma woman, works in a cigarette factory in Seville, Spain. The year is around 1830. At breaks, and after the factory shifts, townspeople and soldiers gather to see the cigarette girls exit. Many are there especially to see Carmen. Men lavish her with praise and ask for her favor. 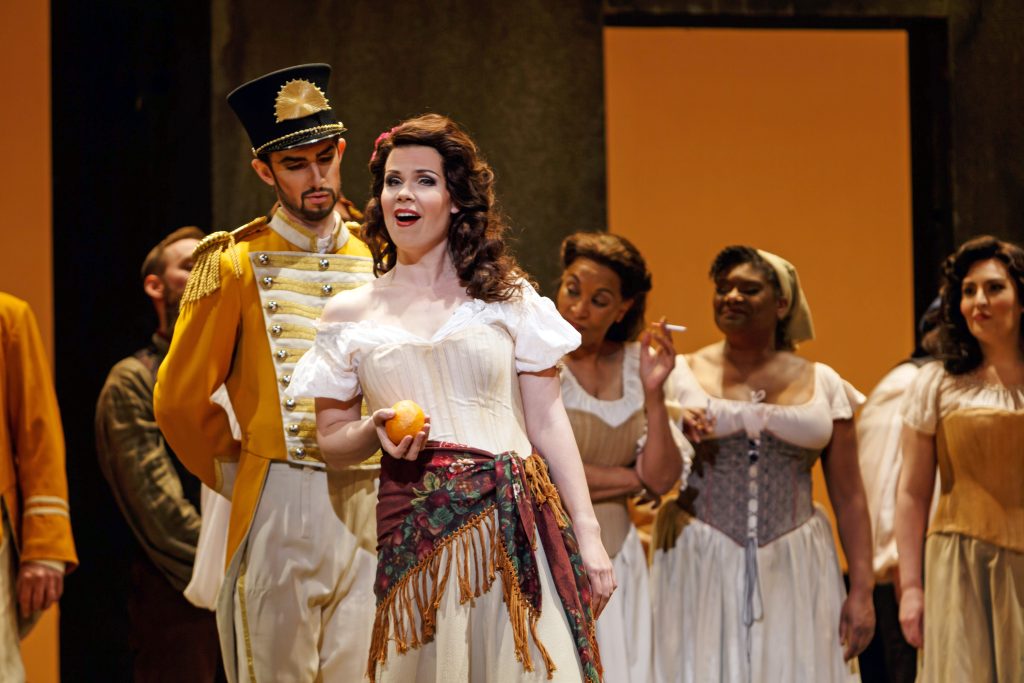 Zuniga (Jeremy Harr) with Carmen and the cigarette girls behind them.

This adoring throng and its interaction with Carmen delivers one of the first beautiful arias of the show. As Carmen travels around the town plaza where the people have gathered, she sings about love and the crowd (chorus) sings back. “Habanera,” or “Love is a Rebellious Bird,” is a fantastic song that you will recognize either from its operatic source or from popular culture sampling of it. It speaks to the fickleness of love. There must have been about 50 cast members on stage: factory girls, soldiers, and townsfolk including a group of children (singers from the Pittsburgh Youth Chorus). It was a big glorious sound to behold with Carmen and the chorus of people on the stage.

Zanda Švēde, the Latvian mezzo soprano from Oper Frankfurt, who plays Carmen, has a beautiful, captivating voice. She plays the role with a broad smile and a mischievous twinkle in her eyes.

A Spell is Spun

After “Habanera” she finds the one person who is not the slightest bit interested in her, Corporal Don José (portrayed by tenor Scott Quinn, who also plays the role for Houston Grand Opera) and showers him with her full flirty attention. He has been polishing his rifle while she has been singing and flirting with her audience. She gives him her flower. The bell is rung to call the workers back into the factory.

Not long after the workers are called back they come streaming out again. It seems Carmen got into a fight with another woman and cut her with a knife. Half of the cigarette girls are blaming Carmen and the other half are defending Carmen. When questioned by Lieutenant Zuniga (bass Jeremy Harr) she pushes him and is arrested. As fate would have it Zuniga orders José to take her into custody. Carmen’s hands are tied behind her back and she is being watched by José.

Carmen works her charm on José, promising him good times together with fun nights at Lillas Pastia’s tavern if he helps her escape. His will is weakening and he agrees to help her get away. José is sentenced to a few weeks in prison and bucked down to private rank for aiding Carmen’s escape. 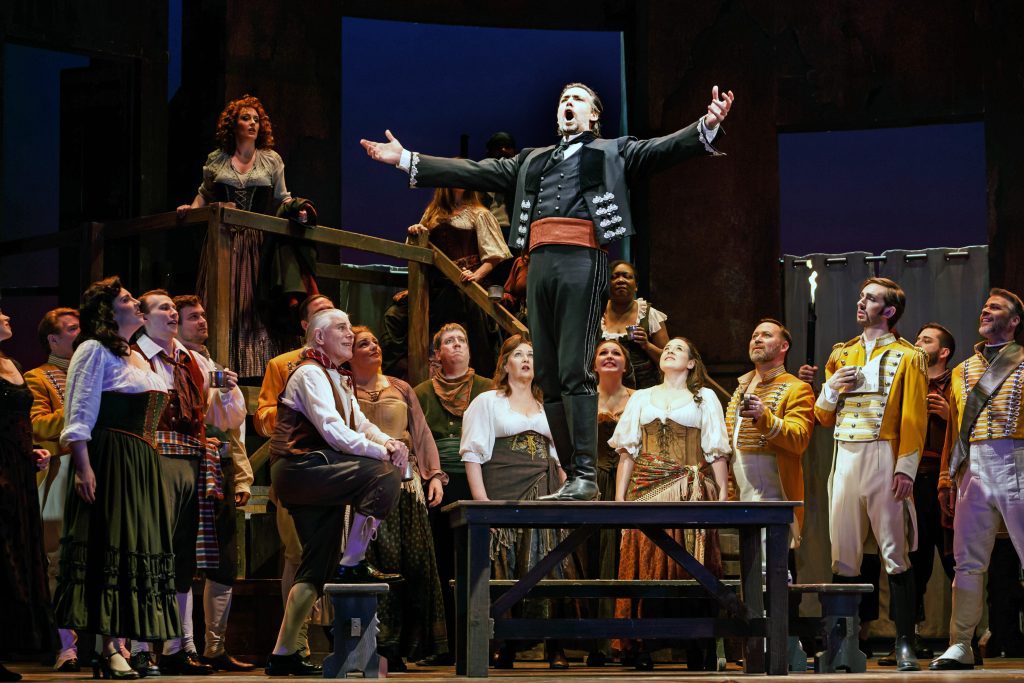 Escamillo singing the ‘Toreador Song’ at the tavern.

Carmen and her two friends Frasquita (soprano Véronique Filloux) and Mercédès (mezzo-soprano Leah Heater) dance with guests at the tavern. Then a champion toreador, Escamillo (baritone Michael Todd Simpson), comes into the tavern with others proclaiming his arrival. Escamillo sings a wonderful aria, the “Toreador Song,”about fighting the bulls. This song may sound familiar as well. He expresses his interest in Carmen, but she tells him she’s in a relationship. 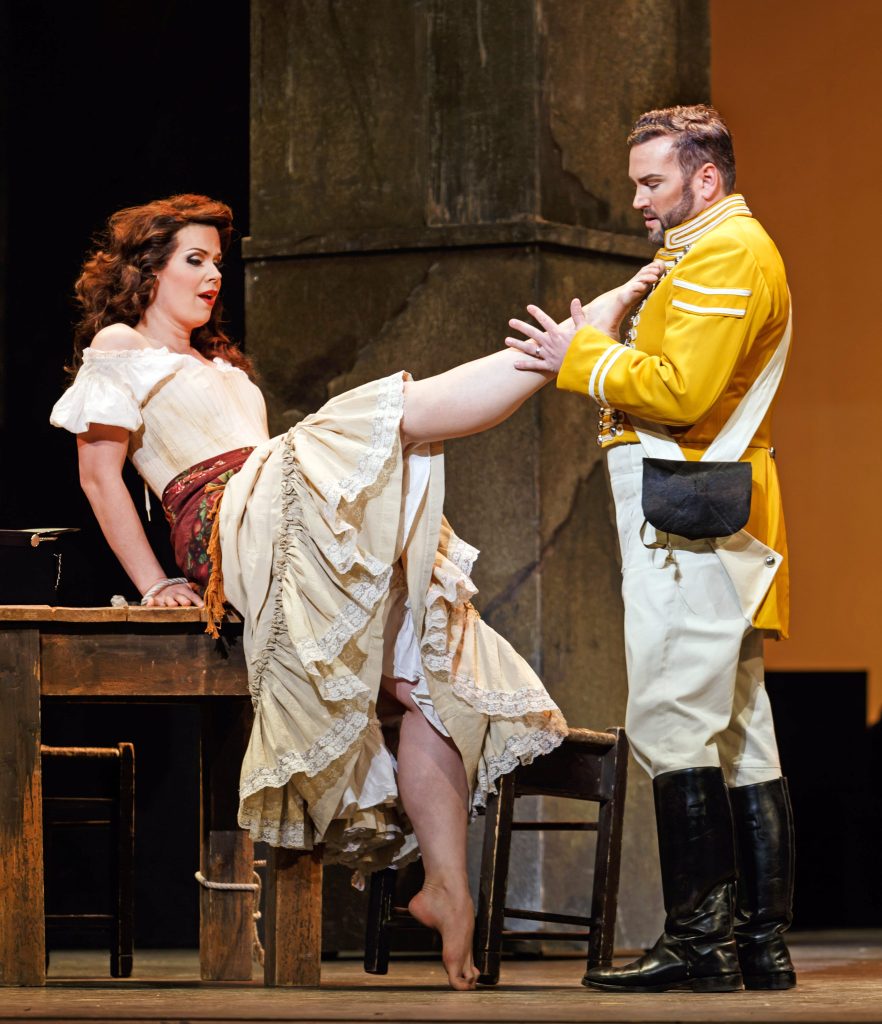 Carmen and her beau Don José (Scott Quinn) getting reacquainted after his time in prison.

José and Carmen reunite at the tavern. The reunification is going splendidly until the bugle sounds, calling José back to his barracks. Carmen becomes very disappointed and goads José about having to leave. He stays and tries to get back into her good graces, singing wonderfully about how he kept the flower she gave him at their first meeting. Carmen mentions that she danced for Zuniga earlier in the evening. Then Zuniga returns and José and him get into a fight. Now José must flee with Carmen to the mountains.

While they are in the mountains Escamillo comes looking for Carmen, who had previously told José that her love for him is waning. José realizes what’s going on and starts a fight with him. People separate the two. Before he departs, Escamillo invites Carmen to come see him at his next bullfight. The story arc is now set for the rest of the opera. 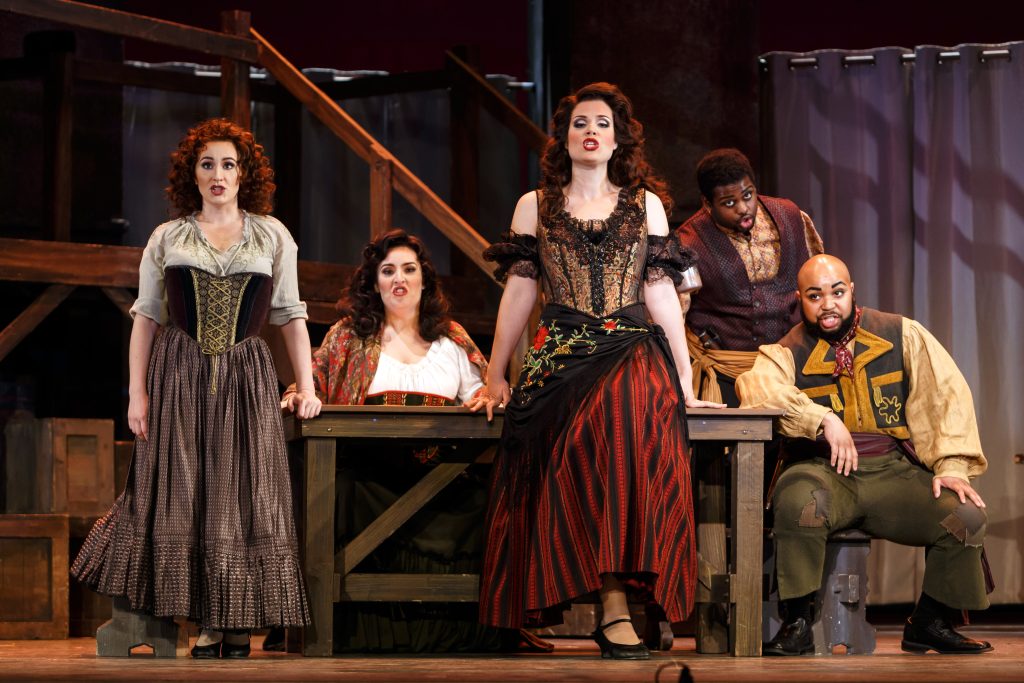 The smugglers, Remendado (Andrew Turner, standing behind the table) and Dancaïre (Yazid Gray), try to enlist the help of the women because of their treachery and thievery. L to R: Frasquita (Véronique Filloux), Mercédès (Leah Heater), and Carmen.

Several other musical highlights are the comedic scene where two smugglers, Dancaïre (baritone Yazid Gray) and Remendado (tenor Andrew Turner), sing about how they need a “thieving woman” to help them smuggle, as women are full of treachery. Micaëla’s (soprano Danielle Pastin) aria about how she’s afraid to be in the mountains and also about meeting Carmen is sung very well. The ending scene where Carmen and José sing to one another with such heartfelt emotion is superb. 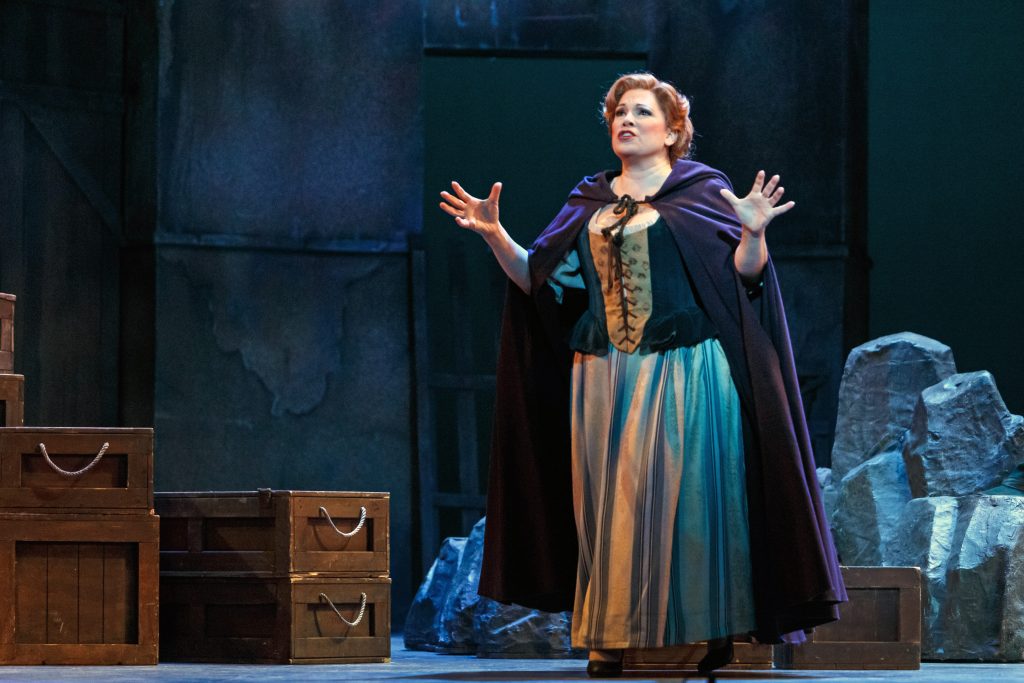 Micaëla (Danielle Pastin) sings an aria about her fears in the mountains.

Pittsburgh Opera’s Carmen possesses many delights. Gorgeous costumes include Carmen’s various red and black dresses, soldiers’ uniforms, and bullfighter outfits. Amazing music comes not only from the opera singers, but also from the orchestra.

Stage Director Garnett Bruce did a fine job with all the moving parts of Carmen, especially the big scene at the beginning with so many actors on stage. Many in the production are either Resident Artists of Pittsburgh Opera or alumni of that program. Other cast members are baritone Daniel Teadt (Moralès) and Bob Rak (Lillas Pastia/Guide). Dancers and choreography are by Attack Theatre. All of the cast members skillfully play their roles.

Carmen is sung in French with English text above the stage on a monitor. Before the opening night performance a group of singers sang the Ukrainian National Anthem. 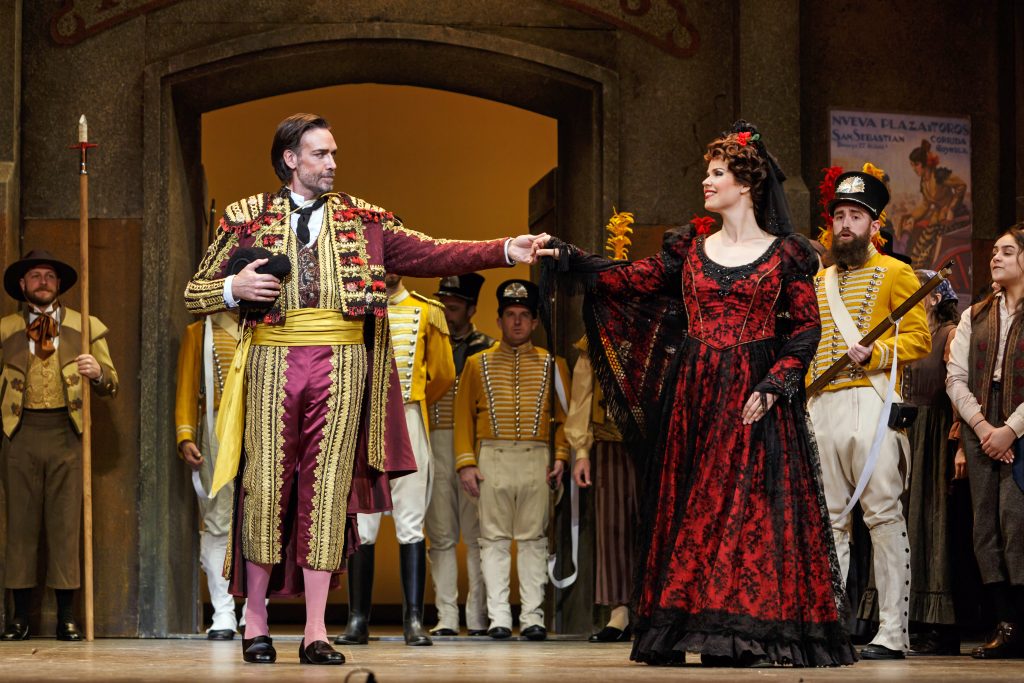 The toreador, Escamillo (Michael Todd Simpson), and Carmen before the bullfight.