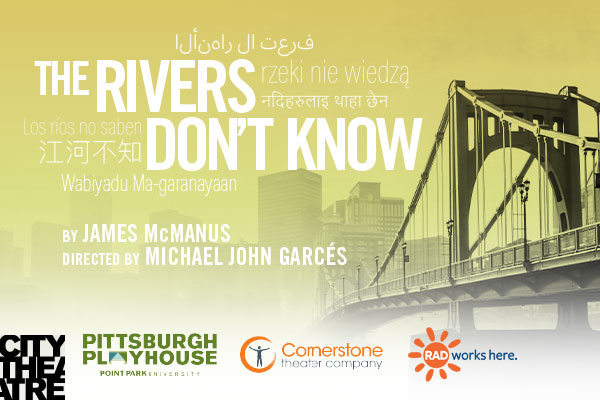 America is a land of immigrants. We are all immigrants. Even Native Americans crossed a land bridge between the continents of Asia and North America thousands of years ago. The Pittsburgh region has seen mass immigration up through the 1970’s. This more recent period of immigration is the subject of City Theatre’s latest production, The Rivers Don’t Know, onstage September 10 – 19 at the Pittsburgh Playhouse.

The Rivers Don’t Know, a pre-regular season play is done in association with Point Park University’s Pittsburgh Playhouse and Cornerstone Theater Company, chronicles the experiences of refugees and immigrants in Pittsburgh. The story is told through three subplots and the common threads running through them. They include a 1940s steel mill worker, a Somali family, and a class of ESL (English as Second Language) students, and what it means to be Pittsburghers.

For the past two years playwright James McManus and director Michael John Garcés have conducted interviews and story circles (both in person and virtually) with immigrant communities and partner organizations in Pittsburgh. The results of their research became the basis for the play, The Rivers Don’t Know. The production has nine main characters and a chorus of five.

From City Theatre, “Writing a play where the words are not strictly from my imagination, but from people who sat across from me feels like a sacred trust,” said Playwright James McManus. “I can conjure the faces and feel the words of those who shared difficult and joyous moments from their lives about the struggles and triumphs of being an immigrant or refugee in a new city. I want to be careful with the pieces of their lives that they were brave enough to share while at the same time crafting a script that will engage an audience and give a fuller account of their lives than is often shared in the news. I feel a weight to get it ‘right’ because that feels to me what every person and every community deserves.”

Support for The Rivers Don’t Know comes from the Allegheny Regional Asset District’s RADical ImPAct program, made in honor of RAD’s 25th Anniversary in 2019. The project engaged community partners including ARYSE, The All for All Coalition powered by the Global Switchboard, Global Minds, Literary Pittsburgh, JFCS Refugee & Immigrant Services, and World Affairs Council of Pittsburgh. The production coincides with Welcoming Week (September 10 – 19), an initiative by Welcoming America to bring together immigrants, refugees, and long-time residents to mark the importance of welcoming and inclusive places.

Admission is free, but registration for tickets is required. With some adult language, The Rivers Don’t Know is best suited for adults and kids 12 and over. For more information and to register for tickets visit City Theatre on the web or contact the box office at (412) 431-2489. The location for this production is at the Pittsburgh Playhouse, 350 Forbes Avenue, Downtown.

The following covid mitigation measures will be taken for this production: all staff and artists are fully vaccinated, all staff and patrons will be required to wear masks, and the Playhouse will only be seated to 70% of capacity.