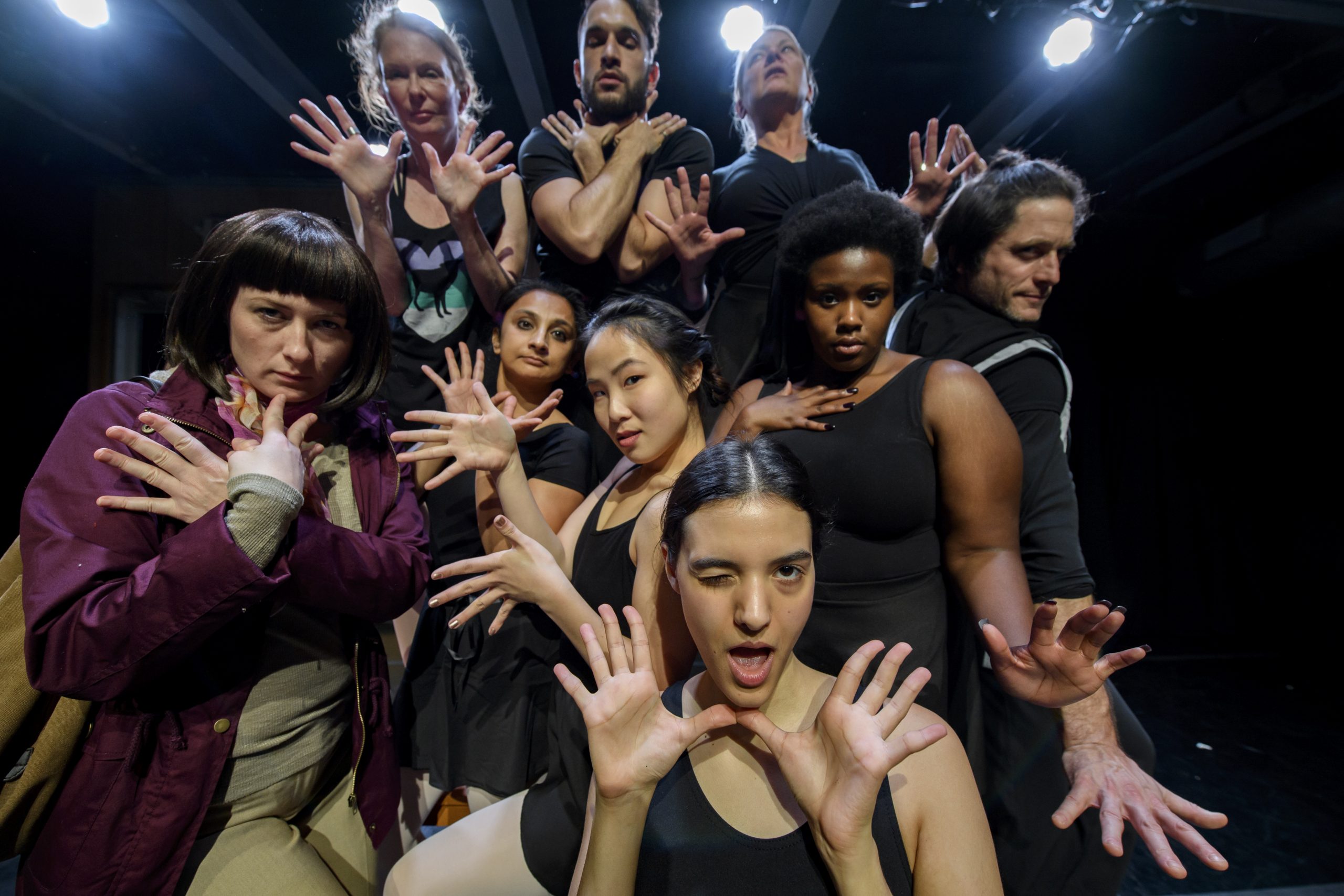 The ‘Dance Nation’ gang love to mug for the crowd while they’re getting mugged by the pressures of preteen performance anxiety. (photo: Brittany Spinelli)

Although it’s a play about dancers, there are multiple balancing acts in Dance Nation, the latest from the lauded American playwright Clare Barron. Our present era in the dramatic arts is the Age of Seriocomedy—a time when recipes for stage and screen tend to use both serious stuff and humor as main ingredients—and this play juggles the two vigorously, mixing hilarity with emotional monstrosity.

The play also has characters teetering out of balance between extremes. “There is no such thing as ‘talent,’” argues a dance mom who thinks her preteen daughter just needs a chance to develop the tools of greatness. There is indeed such a thing as talent, the kid’s teacher responds, and what does the kid think? You could say she’s a hot mess but that would be a cliché.

Speaking of which, Dance Nation’s script is packed with devices and punch lines that go for high impact, but some of these efforts teeter on the edge of theatrical cliché. Whether the play deserves a fire emoji or a so-what emoji may depend on your tastes. I’d call it a split decision: a play with parts that I love and parts that, to me, cross the fine, fine line between love and a waste of time. (Tip of the hat to Avenue Q for that grab from a song lyric.)

In the final analysis, my aesthetic compass would point you to Braddock, where barebones productions is staging Dance Nation through December 15. A play of hits and near misses is far more interesting than one that muddles along in mediocrity. Let’s sample a few of its highs and not-so-highs, as seen at barebones.

Dance Nation opens with a bang. First thing you see is an exuberant troupe of dancers in sailor costumes storming the stage. They’re high-kicking and hot-dogging an intricate jig, to snappy music, and the audience is loving it. Not only do the actors dance well; they know how to ham it up just enough to make the number a parody of itself. They put a little too much showboat into the tricky moves, and a little too much “Look at me!” into the smiles they beam at the crowd, until the whole thing becomes entirely too much. In every sense of the word, the scene is a hoot.

But it’s not the bang. Not yet. It comes near the end of the number. The dancers are hip-hopping their way to a triumphant exit, when slam, bang, something bad happens that breaks the rich spell. And metaphorically, the fractured opening sets up a question raised throughout the rest of the play.

The dancers are preteen girls at a small-town dance school. Their teacher, a guy named Pat (played by David Conrad), has big-time aspirations and a teaching M.O. borrowed from the drill sergeant in Full Metal Jacket. As he pushes the kids to win competitions against dance teams from across the nation, the question is: Will the experience enrich them or break them? 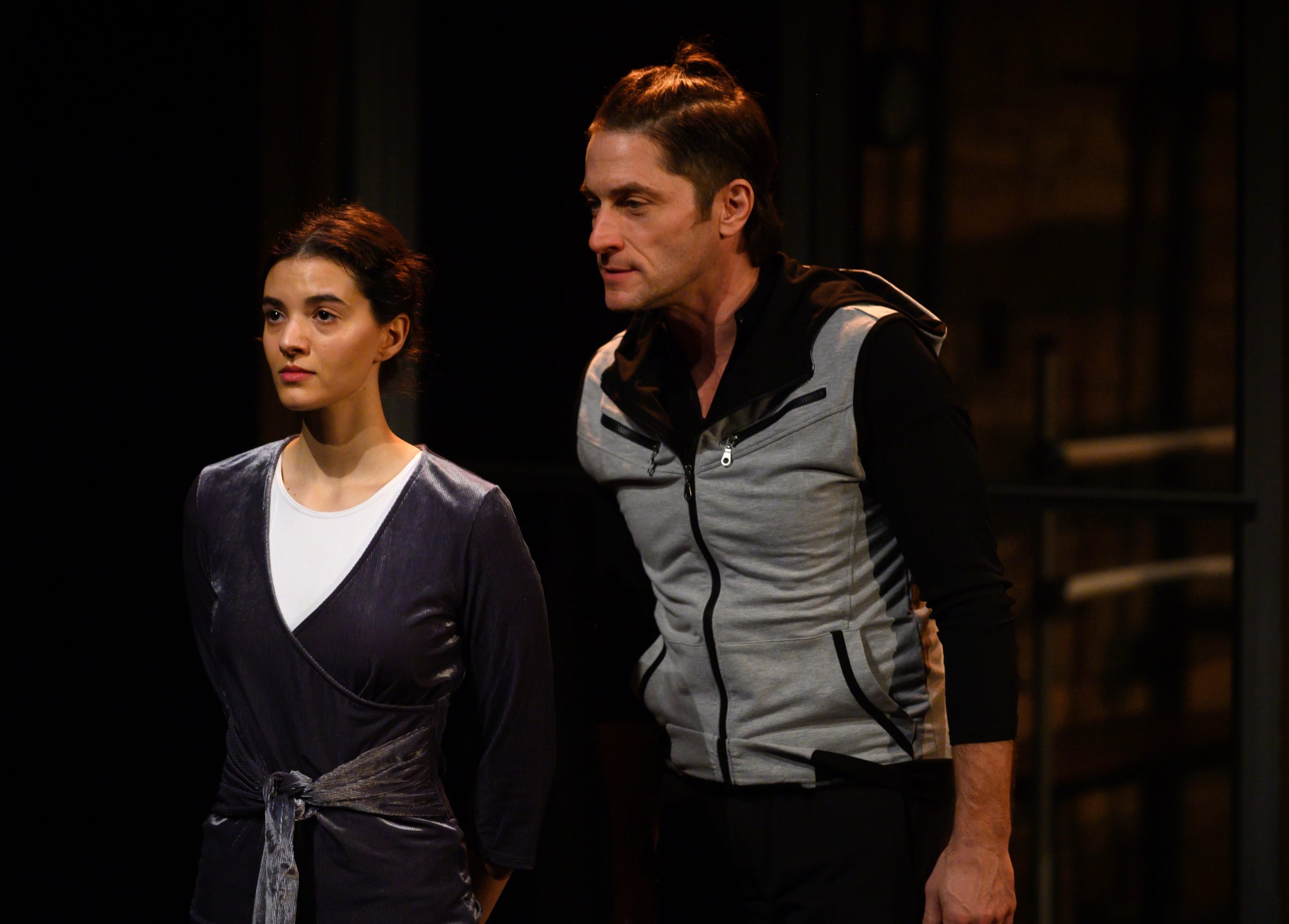 Amina (Liron Blumenthal) is a rising star but Pat (David Conrad) warns her she’s only one in a galaxy of them. (photo: Jeff Swensen)

Surely that theme should resonate with many of us. Either in youth or as parents, we’ve seen how all sorts of fun-and-learning activities can be reconceived as ordeals to separate the champs from the chumps. Are you gonna get into Princeton, like Jeff Bezos did, or beg for a job in his warehouse?

Early in Dance Nation, drill instructor Pat drills home the theme with a pep talk. Gathering his students near a special spot on the studio wall, where he’s hung group photos of top-girl classes from years past, he challenges the current crop: “Will you be winners? Like the preteen elite competition squad of 1992? Or 1995? … Or will you not even make it to The Wall? Oh, oh, who were those girls in 1996? We don’t know. It’s like they never existed.”

The words ring cruel, yet the scene is funny. Pat is so wacky about winning that he too becomes a self-parody. Watching the girls buy into his spiel makes it wackier, especially when Pat introduces the new dance routine he’s devised. The girls intend to stomp their opponents in the next big round of contests with a take-no-prisoners dance that interprets the life of a world-class winner, Gandhi. 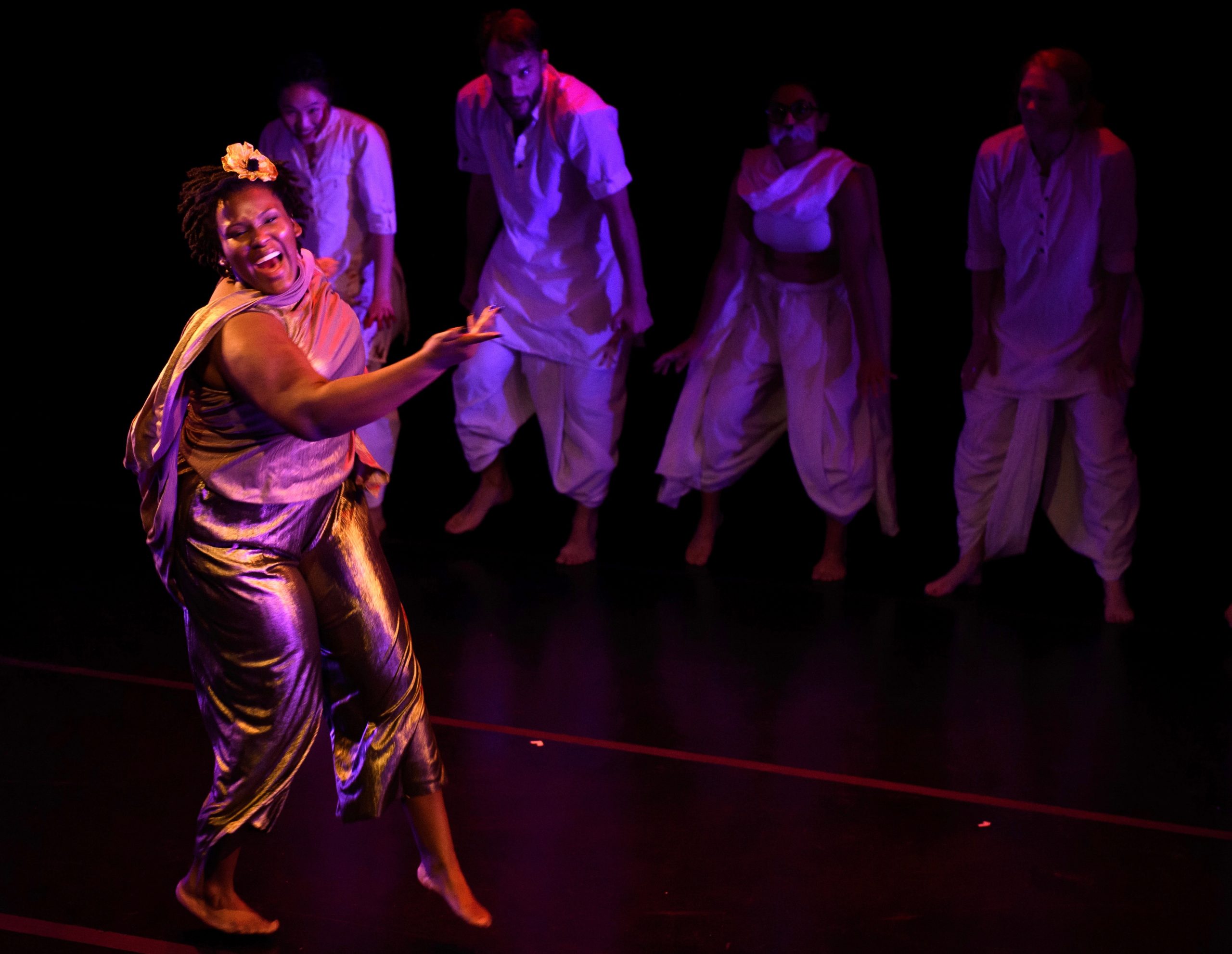 Zuzu (Hope Anthony) channels the bold and brassy Spirit of Gandhi, out to liberate India and smash the competition at the Boogie Down Grand Prix. (photo: Jeff Swensen)

Hot times lie ahead. There will be a pre-contest scene in which the girls psych themselves up by chanting “Gandhi destroys!” And, counterbalancing the mega-doses of irony, there will be many scenes exploring the interpersonal tensions and individual concerns among girls on the brink of puberty. These scenes, I think, are where Dance Nation begins to wobble.

The sensitivities we feel in our preteen-to-teen years are real. A young woman can be freaked when she has her first period, as Sofia (Mei Lu Barnum) does in the play. Young guys as well as girls can be baffled by rivalries between friends, as when Amina (Liron Blumenthal) outshines Zuzu (Hope Anthony) as a dancer.

Such things are highly relatable-to. The problem is that so much has been done already in the area of coming-of-age-stories. And while playwright Barron pulls out all the stops in trying to make her material fresh, I’m afraid that sometimes—well, it’s a fine line. Maybe you’ll get a kick out of the girls going communally wild in a chat-and-compare session about discovering the qualities of their “pussies.” Although I must admit I don’t have one, I thought the territory was covered definitively better in Eve Ensler’s The Vagina Monologues.

Meanwhile, a core theatrical device in Dance Nation comes across with varying effect. Per Barron’s guidelines, the kids are played by adult actors, including some ‘way too adult to pass for 12 or 13. There were times when I thought Wow, this really works. It brings to life the notion that patterns set in youth stay with us; that in a sense we’re just children grown old. But at other times the gimmick got in the way of seeing the characters as the preteens they presumably are.

Balancing acts everywhere. You be the judge. I spoke with people on opening night at barebones who thoroughly enjoyed Dance Nation, and the judges for this year’s Pulitzer Prize for Drama rather liked it, too. They decreed it a finalist for the 2019 prize (won by Fairview).

The ultimate judge—time, fickle time—could rank Dance Nation higher still. Looking back through the list of past Pulitzers, you’ll find years in which it was the finalists or other plays, not the winners, that have won cherished places in the repertoire. But then again, not even a “finalist” tag is the final word. Many plays shine briefly, then are all but forgotten. It’s like they never existed.

Through December 15 in the barebones black box at 1211 Braddock Ave., Braddock. For tickets and visitor information, visit barebones on the web.