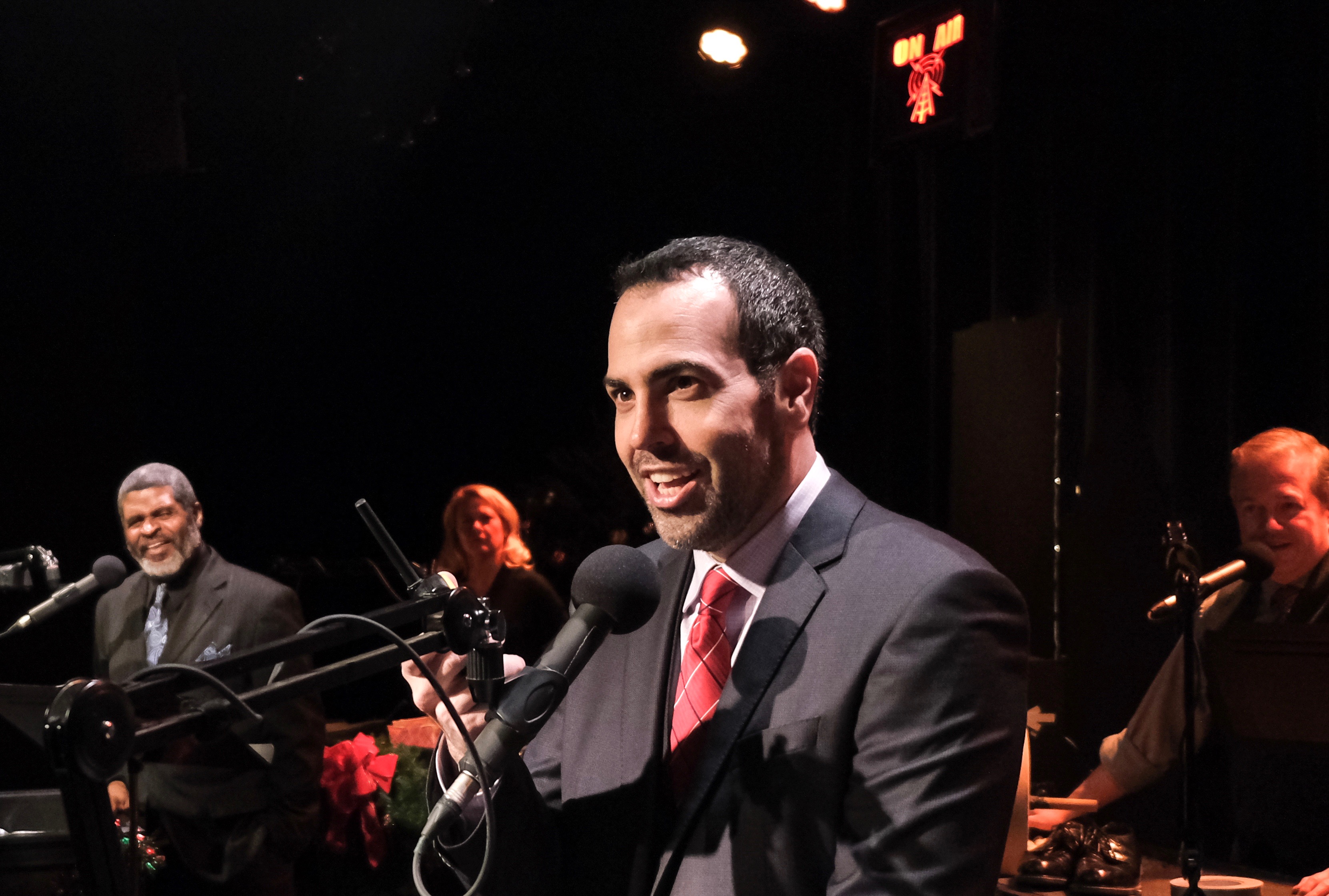 Patrick Jordan is our hero John McClane, a proud member of the Wilmerding police department, in ‘Die Hard N’at.’

If you’re looking for light entertainment, try a parody of a heavy movie. Die Hard N’at—a Pittsburgh-themed takeoff on Die Hard—triggers more laughs (and more different types of laughs) than a lot of so-called comedies do, and it’s very well performed.

Bricolage Production Company presents Die Hard N’at through December 22 in its Midnight Radio format. The show is done like an old-time radio drama, with the actors positioned at podiums, plus live music and sound effects generated by humans. The experience isn’t the same as a fully mounted stage play, but it works. Including visually. You’ll want to watch closely while you listen, as a good bit of the humor comes through body language that augments the Pittsburghese.

Die Hard N’at follows the plot of Die Hard. Bad guys take hostages at an office Christmas party, seeking access to loot in the corporate safe. An off-duty cop, defying the odds and police protocol, sneaks through the building to hunt down the bad guys one by one. There are, however, significant alterations.

Whereas the 1988 action movie unfolded in a Los Angeles office tower, the play moves the setting to Pittsburgh’s fictional Terrible Tower. Creepy criminal mastermind Hans Gruber, played by Alan Rickman in the film, becomes Heinz Gruber here, acted with mock-sinister flair by Wali Jamal. He puts on a fluty German accent that contrasts nicely with the nasally flat, down-home Pittsburgh accents used by others; the clashing music of the two tongues is itself pretty darn funny.

As for the off-duty cop, John McClane: While the movie made him an NYPD man visiting L.A., in Die Hard N’at he’s a Wilmerding policeman braving the perils of Pennsylvania’s second-largest city. Movie critics praised actor Bruce Willis for giving McClane vulnerable qualities that made his heroism more appealing. The parody has actor Patrick Jordan taking the hero’s vulnerability over the top, for comic effect. (Example, when he’s injured: “Oh, Jesus Peter Paul Mary and all the saints, that hurts … holy crap oh crap … oh, Jiminy Cricket on a goddamn Ritz cracker …”)

Now consider a few questions that may arise.

Must one have seen Die Hard to enjoy Die Hard N’at? No, but it helps to have some knowledge of the film. I prepared by reading a couple of online summaries and sampling a few scenes via YouTube clips. That was enough.

Isn’t Die Hard awfully violent? Yes, which is why I hadn’t seen it. For personal reasons, I do not find gunfire entertaining, nor do spectacular flaming explosions speak to my inner 11-year-old. The good news is that Die Hard N’at tones down the brutality. Characters die, but the deaths are suggested more than shown. No stage firearms are wielded. And for me, at least, the overall cartoonish treatment made it possible to see the play for what it is—a spoof of a Hollywood fable about a lone-wolf hero going in to rescue folks from an evil gang of foreigners. 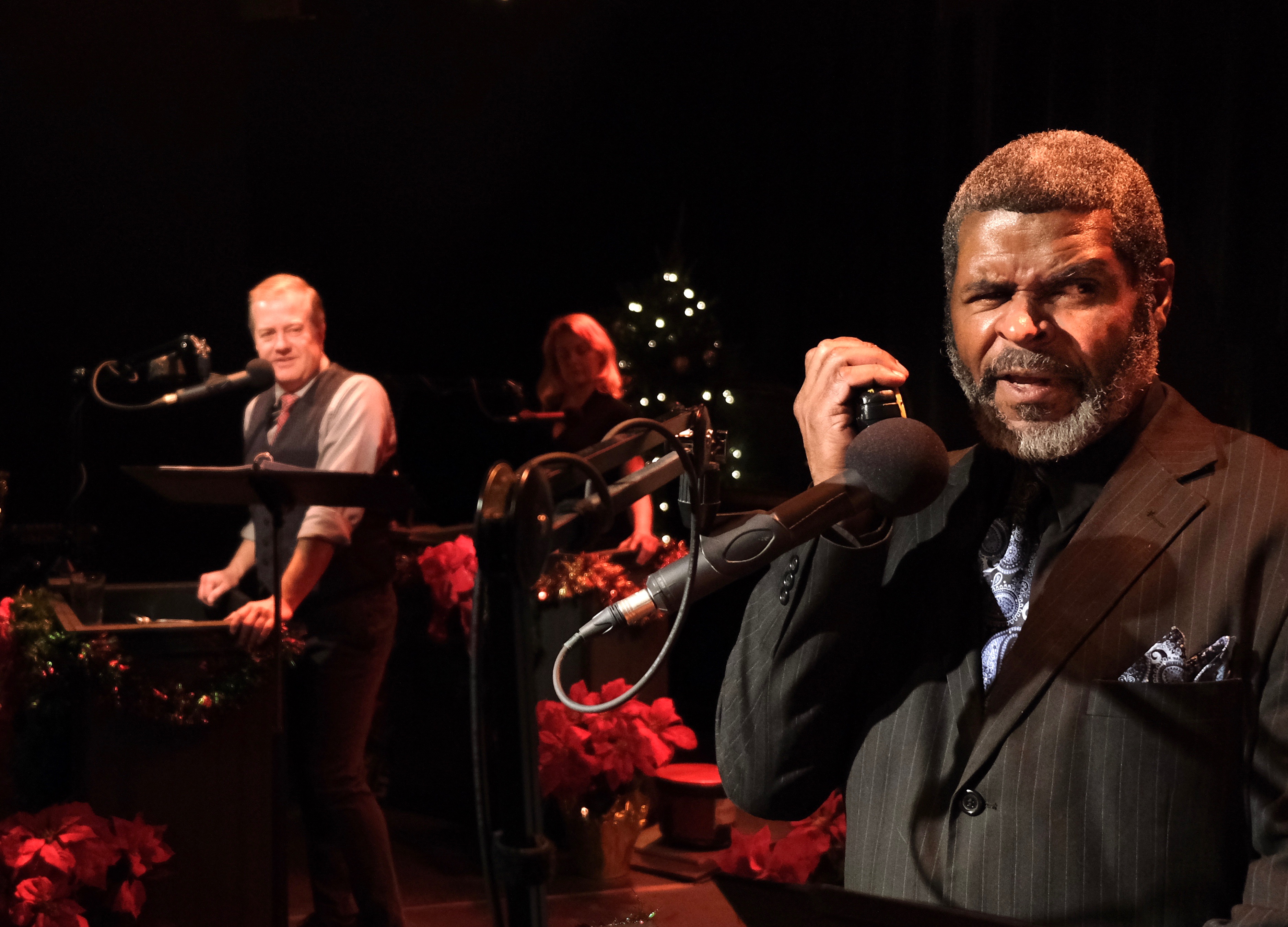 Was ist das? Germanic archvillain Gruber (Wali Jamal) gets bad news on the walkie-talkie while one of his grinning minions, played by Jason McCune, observes from afar.

And thirdly but not leastly: How good is the Pittsburghese in this parody?  Dang near perfect. Playwright Gayle Pazerski—credited as “Yinzerizer” in the program notes—has captured the je ne sais quoi of vintage Pittsburghese. The essence of our regional dialect goes far deeper than saying stuff like “dahntahn” or “nebby.” Talking the talk involves much more than flattening a diphthong to make “our boss is a jagoff” come across as “R boss is a jagoff.”

True Pittsburghese expresses a set of attitudes, a weltanschauung, that is rooted in but also transcends blue-collarness. It does so in language quite unlike the kind I just wrote. Die Hard N’at gets it; the performers nail it.

The play is peppered with Pittsburgh cultural references, too. At one tense moment, hero McClane bursts into anger at a city police chief who has tried to intervene in the hostage situation. McClane’s tirade begins: “I ain’t seen such a sloppy operation since PennDOT built that little bridge under the Greenfield Bridge, because the Greenfield Bridge was falling onto the Parkway … “ (The diatribe goes on at length. I could not hear the rest precisely due to laughter in the house.)

This kind of humor could grow tiresome. But the deftly paced script, combined with the skill of the actors, keeps it rolling. Lissa Brennan has some good lines but shines mainly through her stage presence. As McClane’s estranged wife, who happens to be one of the hostages, Brennan is the story’s imperiled yet defiant heroine, and she plays it like a Yinzerette you totally don’t wanna mess with. A drop-dead glare. Shoulders squared. A demeanor that says: “See that shoulder? See the chip?” 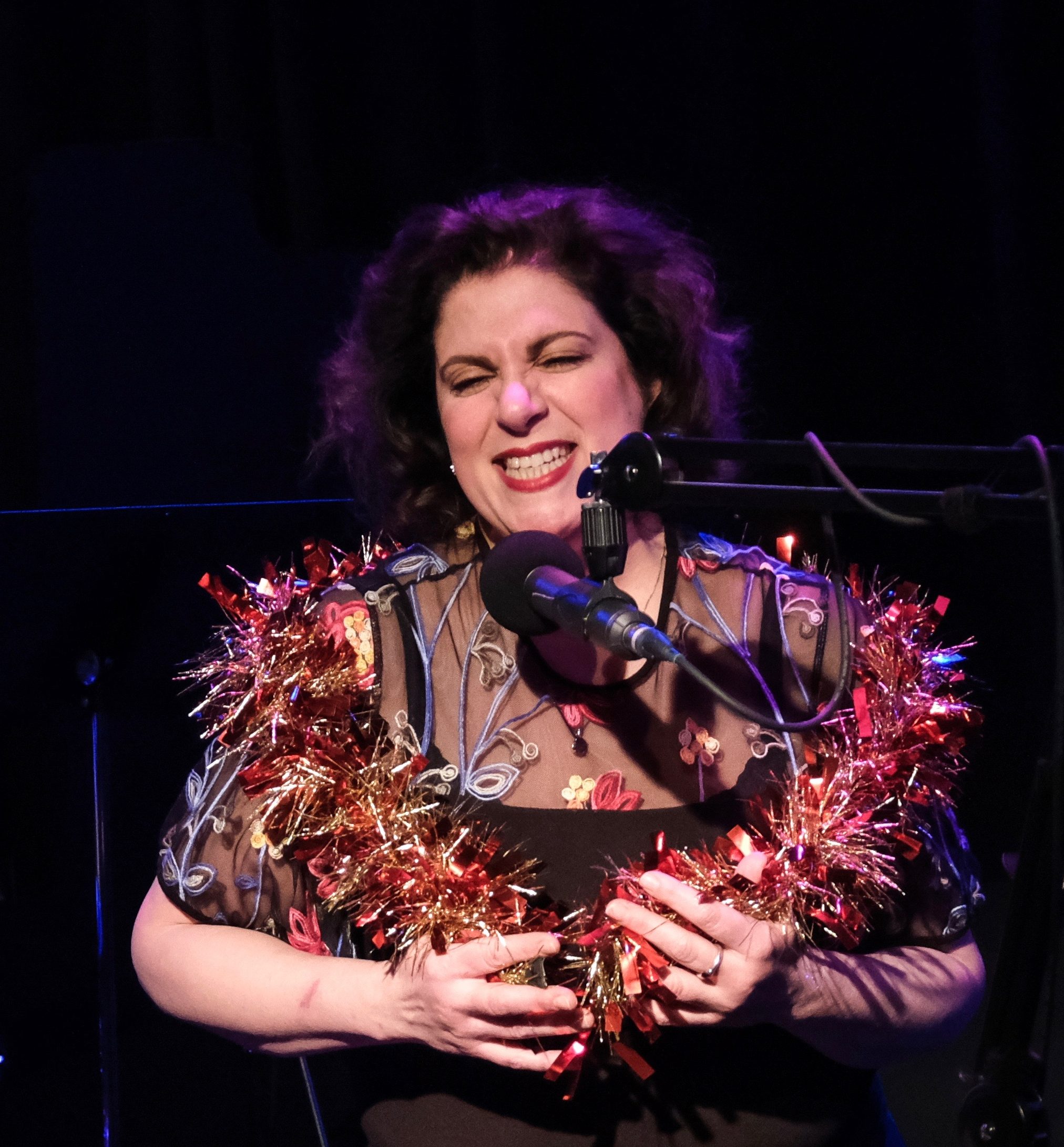 Wali Jamal is simply dazzling. Along with playing Gruber in threatening Teutonic tones, he’s also a good-natured Pittsburgh cop and a jive-talking Uber driver named Argyle. Sometimes he shifts rapidly between those poles-apart roles. You could call it incredible, except it is credible. I seen it done and I believe.

Elena Alexandratos and Jason McCune share myriad supporting roles brilliantly. What’s nearly incredible is how a cast of only five—these two plus Jordan, Jamal, and Brennan—manage to create an entire, comical Pittsburgh invaded by outsiders.

Near the end, Die Hard N’at turns self-referential. Gruber has poor McClane cornered. “Drop your gun, John,” he snarls. “There won’t be any last-minute play. No John Fuqua to carry out your Immaculate Reception.”

Shakespeare it isn’t. But if you are Dickensed out for the holidays, check out Die Hard N’at.

Die Hard N’at, adapted from Die Hard by Gayle Pazerski, is directed for Bricolage Production Company by Sheila McKenna. Musical director/musician is Camille Rolla. Through Dec. 22 in the Bricolage first-floor theater at 937 Liberty Ave., Cultural District. For showtimes and tickets, visit the company on the web or call 412-471-0999 for group sales.