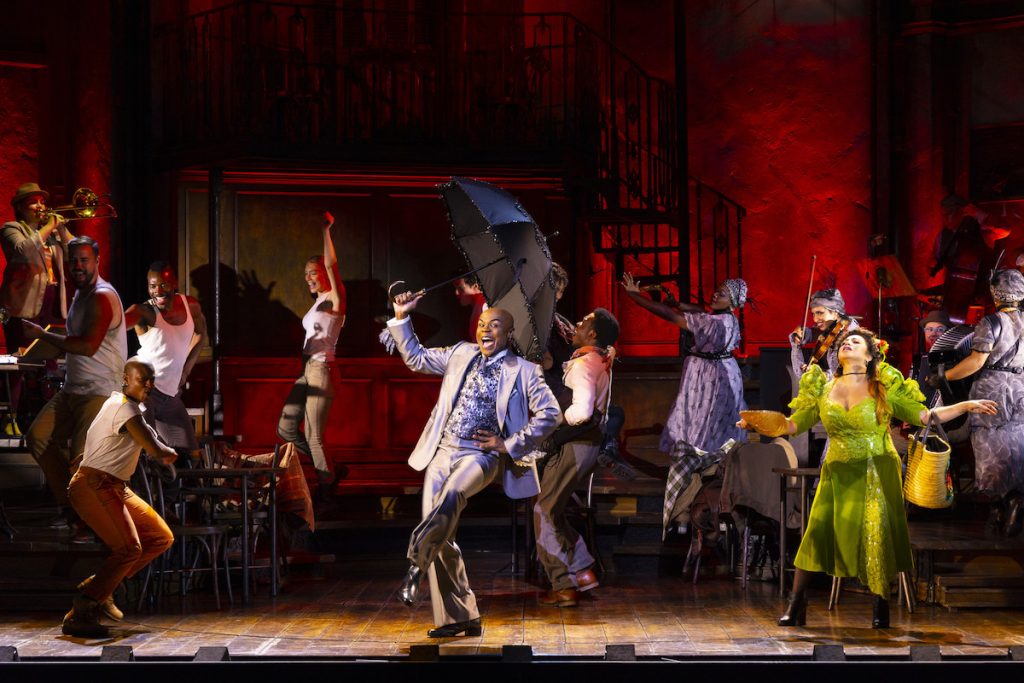 The cast of ‘Hadestown’ delivering a blazing hot song and dance number.

On Tuesday night, the Cultural Trust’s PNC Broadway in Pittsburgh series descended into hell. And the packed house gave it a rousing, standing ovation. Hadestown, the hiply titled retelling of the classic myth of Orpheus who follows Eurydice into the depths of the underworld, is a lyrical folk and R&B tribute to the power––and oft-times failure––of love. For those who may anticipate a more modern interpretation, or who have no familiarity with the catharsis of Greek tragedy, fear not: there is great joy to be had when realizing others share deep despair in their humble lives, too.

Hadestown was composed by singer-songwriter Anaïs Mitchell in 2010 as a simple recitation in song of the classic story. With the help of director Rachel Chavkin, Hadestown then became a West End and Broadway musical, with ridiculously hot ticket demand when it opened in New York in 2019. The show garnered eight Tony Awards, recognizing it as the season’s Best Musical and honoring Mitchell for Best Original Score. It’s still running strong at the Walter Kerr Theatre.

The touring production of Hadestown is now on stage at the Benedum (but only through November 20) and features a strong cast. As Persephone, the goddess who brings us the promise of spring and the warm, joyous days of summer, Lana Gordon belts the blues with a voice (and occasional shimmy) that earned her due praise in the original cast. Not to be upstaged, three Fates played by Dominique Kempf, Belén Moyano, and Nyla Watson not only deliver the sharpest harmonies, but also the smartest lyrics of the show. And Nathan Lee Graham, who plays Hermes, is another standout for both stage presence and voice. He serves as narrator, negotiator, and concierge for this mythic journey from faith to doubt, and love to fear. 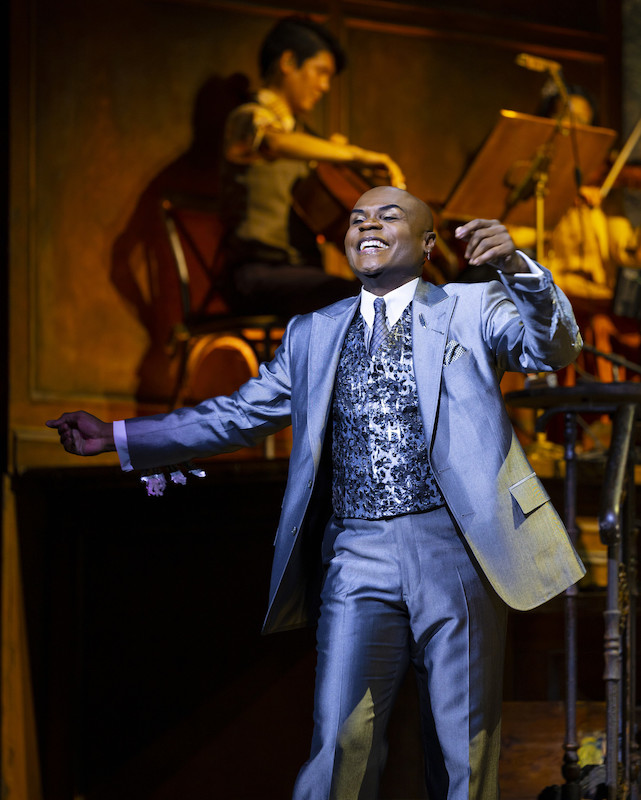 Hadestown is really two classic myths syncopating the story of Hades, god of the underworld who marries Persephone, with the tale of Orpheus, son of Apollo (god of music and poetry), who falls madly in love with Eurydice. She was a spectacularly beautiful woodland nymph who, drawn to Orpheus’ lyre, reciprocated his desires. They confessed their love, but she died on their wedding day. Mitchell’s book, shaped and directed by Chavkin, purposefully breaks tradition by including the mercurial character of Hermes, messenger of the gods who guides souls between the earthly world and the underworld. The action of Hadestown is a smart conflation of mythic exposition, made all the clearer with the help of the Fates, as well as a Greek chorus of five who provide uplifting voice and lively choreography. The multifunctional set, resembling something like a New Orleans street scene, also masks the hellish, dystopian world of a deep, industrial mine. When it is first revealed, the audience feels the radiant heat in which these lost souls must strut and sweat their constant labor. Whereas the mortal world celebrates the joys of song and free-flowing wine, Hades’ hell is all labor and turmoil. 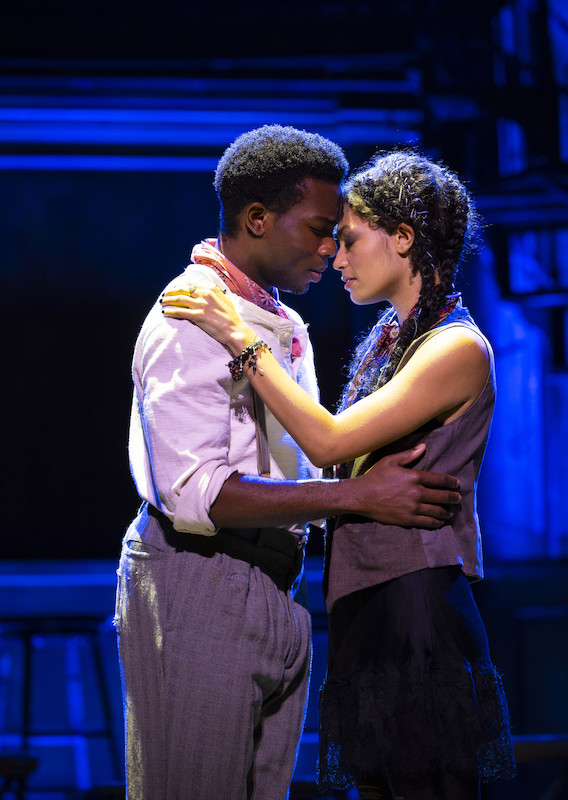 Yet the music never stops. And there are stunningly special moments. Orpheus (Chibueze Ihuoma) and Eurydice (Hannah Whitley) share their nearly instant infatuation in a memorable duet, “All I’ve Ever Known,” each delivering an exceptional and unique voice. And the Chorus, Fates, and Orpheus all but close Act One with the wonderfully inventive number “Wait For Me,” made all the more rich and rhythmic with the swaying of harrowingly oversized industrial lamps. Hades’ (Matthew Patrick Quinn) deep baritone balances despair with the high tenor of Orpheus’ (Ihuoma) remarkable voice. Not to be overlooked are the seven musicians, ever present on stage, embellishing laments, appropriately, with cello and violin, while otherwise lifting joyous triumphs with laughing trombone and playful accordion.

Hadestown is a hot, hearty, and healing exploration of the human spirit. Divinely staged, it’s a hell of a show. 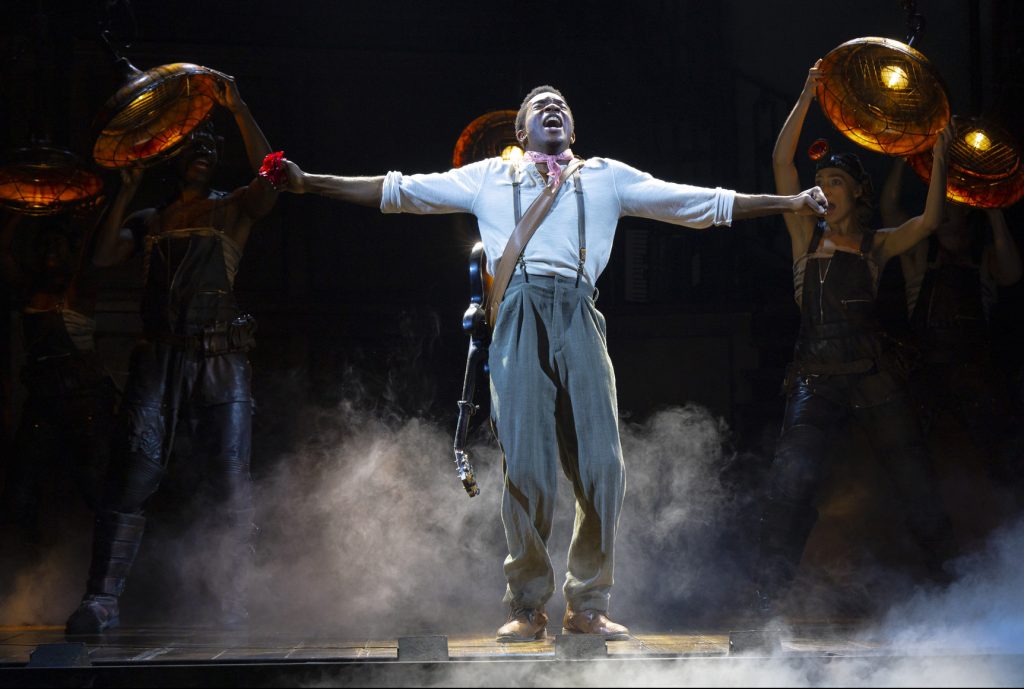 Playing through November 20 as part of the Pittsburgh Cultural Trust’s PNC Broadway in Pittsburgh series, Hadestown is nearly sold out, so reserve tickets now from the Trust Arts website or try other legitimate means to obtain a seat. It can be seen onstage at the Benedum Center, 237 7th St., Cultural District.

Prentiss Orr’s latest narrative history, The Surveyor and the Silversmith, is now available at local bookstores or online at Amazon or Barnes & Noble. It is a deep dive into how and why Sewickley, Edgeworth, Washington, Beaver, and Zelienople were first settled.