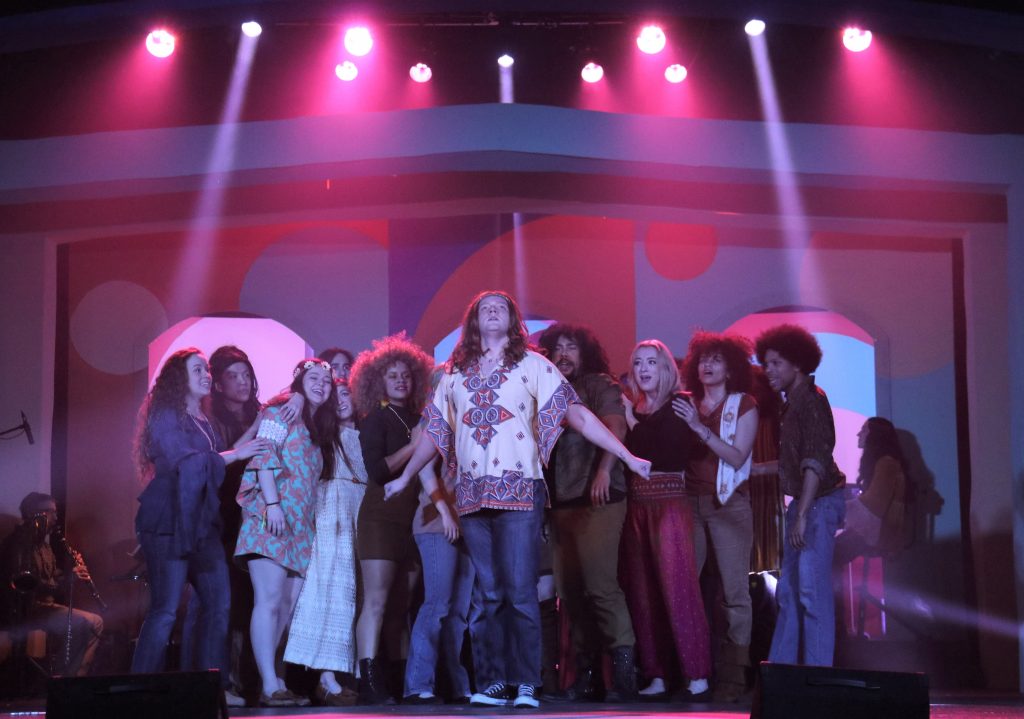 Claude (Ashton Guthrie) has a difficult choice to make in PMT’s production of ‘Hair,’ to obey his draft notice and report, or to defy it.

There has just about always been some type of counterculture movement in American society. The activity can increase exponentially according to societal pressures of the day. American society in the 1960s had many such pressures—an unpopular war, racism, sexism, assassinations, environmental degradation, and a growing lack of faith in the civic institutions of government, business, and religion. Is it any wonder that many young folks (and some older folks) did as Timothy Leary encouraged them to do, “Turn on, tune in, drop out”? Along with sex, drugs, and rock and roll, people looked to alternative communities and even astrology to help them cope with the ills of modern society.

Pittsburgh Musical Theater (PMT), with its staging of Hair: The American Tribal Love-Rock Musical, is giving people who experienced those times a chance to revisit them, and those who haven’t, a glimpse into them. Hair is onstage through February 2 at the company’s Gargaro Theater in the West End.

Sex, Drugs, and a Draft Notice

The production is captivating right from the beginning. A small group of hippies take the stage and are soon joined by more of them, coming out from all points of the compass, including the audience aisles. Then a hippie girl (Clarise Fearn) starts singing one of the main hits from the show, “Aquarius,” with the rest of the tribe as the chorus. Several of Hair’s songs are very mystical and melodic and are a true treat to hear live. Hearing “Aquarius” live, and done so well, gave me goosebumps! It is a very beautiful song.

The main hippie lead characters are Berger (Adam Fladd), the jester and main sexual gyrator of the group, who at one point even wears a loincloth; Claude (Ashton Guthrie), the de facto leader of the group who likes to tell everyone he is from Manchester, England, even though he is a “Polock from McKees Rocks”; Woof (Micah Stanek), who likes to grow things and at one point throws seeds out into the audience; and Hud (Brady D. Patsy), an African American who enjoys smoking and keeping it real about racism. The main female leads are Sheila (Whitney Noelle), a college student and protestor; and Jeanie (Mandie Russak), a redhead “knocked up” by a speed freak, who also has unrequited love for Claude. Other main characters are Dionne (Myah Davis) and Crissy (Liron Blumenthal). All play their parts very well. 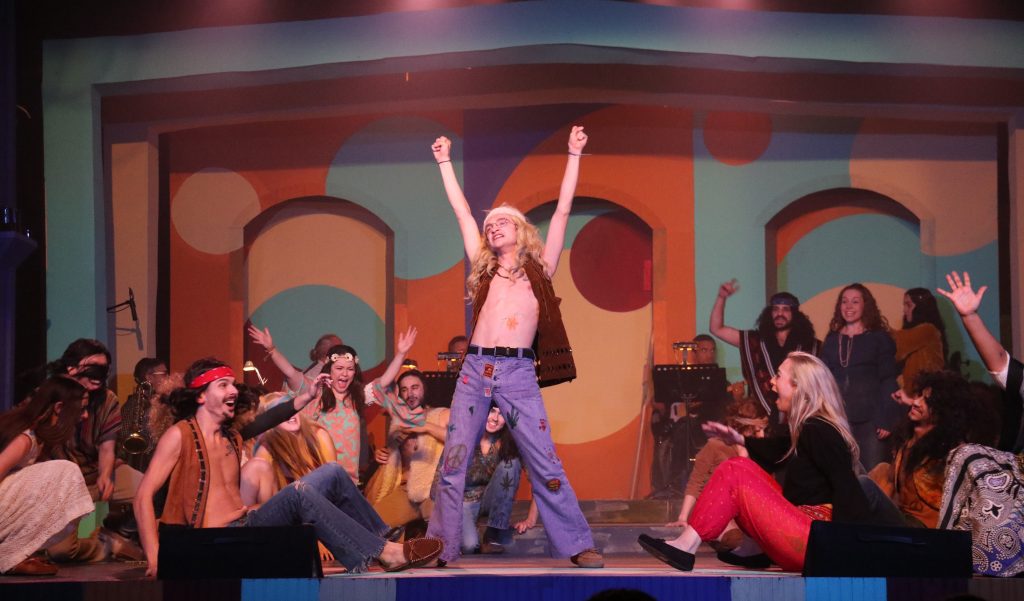 Musical numbers in the first act illustrate the tribe’s life and the pressures of society, and additionally the devices they use to cope with such elements. “Air,” “Colored Spade,” “Initials (L.B.J.),” “Where Do I Go,” “I’m Black/Ain’t Got No,” and respectively “Hashish,” “Sodomy,” and “I Believe in Love” are some examples. The first act’s scenes are more free form and flowing. However the strong plot line of Claude getting his draft notice starts to develop. He enjoys being part of the tribe, but not always scrounging for money or a meal. He is also getting heavy pressure from his parents to go to the induction center and join the army. Guthrie sings about his dilemma wonderfully in “Where Do I Go?”

In addition to “Aquarius,” other top songs in the first act are “Hair,” which has the members of the tribe singing and showing off their hair, and “Easy to be Hard,” sung beautifully by Noelle.

The Sixties were a time of sexual revolution and experimentation, a time when free love, group sex, gay sex, and interracial sex were all on the rise. Musical numbers in Hair reflect these things as well. Two fun scenes deal with interracial sex. In “Black Boys,” the white female members of the cast sing about black men as they prance around the stage with them. In the next number the African American female cast members have their equal turn when they sing and move with the white male cast members in “White Boys.”

A series of scenes shows the hippies tripping from hallucinogenic drugs. These scenes include Claude getting his army rifle while the stage is bathed in red, him on a army parachute drop, an African American female Abe Lincoln, and an army unit including Clark Gable and Aretha Franklin. During that trip sequence one of the tribe examines his hand as if he had never seen it before. Another fun scene is when a honeymooning couple show an interest in the hippies. The woman introduces herself as Margaret Mead (Joe York) with her newlywed husband Hubert (Victor Aponte). They have some lively interactions with the tribe before moving along. 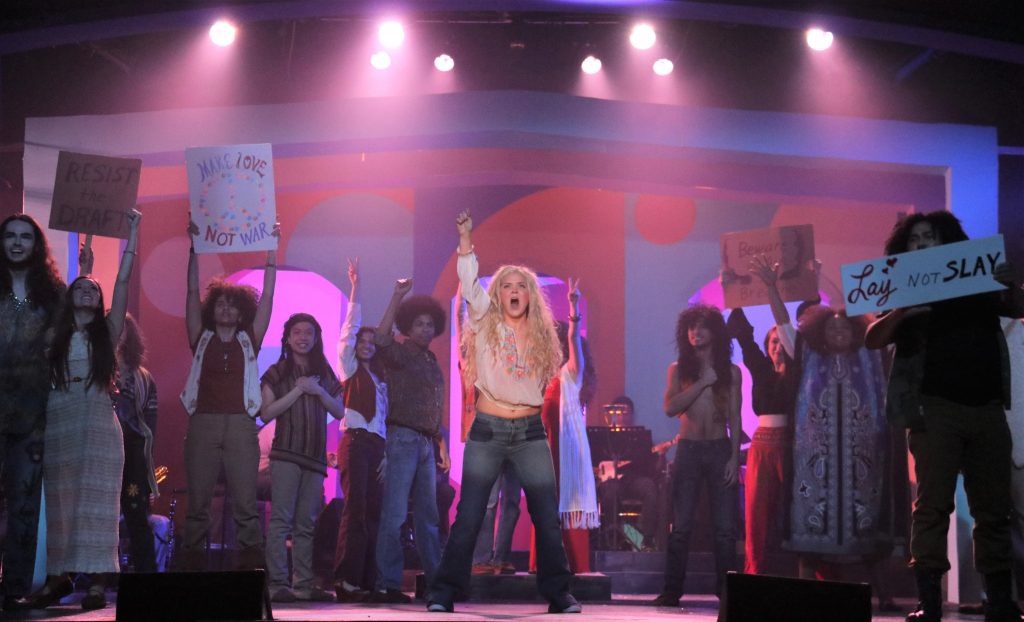 The entire cast delivers more power pop mystique on the beautiful song “Good Morning Starshine.” The cast members come out into the audience and interact with people during a couple of numbers, including “Hare Krishna.” After a series of intense scenes near the end, Hair closes on a high note with Noelle singing, joined by the cast, “The Flesh Failures (Let the Sunshine In).” The tribe comes down from the stage into the audience and encourages everyone to sing and clap along. It is a spiritual, uplifting way to end the show.

Hair is a complex musical to produce and direct as it features a large ensemble cast, is fast paced, and has many musical numbers. The legendary founder of Gargaro Productions/PMT, Ken Gargaro, directed Hair. Everything runs like clockwork under his direction. The cast is charismatic and energetic, with everyone getting a chance to shine, and they do.

I had an opportunity to say hello to Gargaro when I saw him in the hallway before the show. He said that Hair is still very relevant for today. Unfortunately, he is right, as we still have long wars, environmental degradation, racism, lack of faith in government and religious institutions. You will notice a few contemporary updates in Gargaro’s production of Hair.  While Hair points out society’s weaknesses, it also shows us that the way forward for our human tribe is love, hope, and positivity.

Hair opened on Broadway in April of 1968 and was nominated for the 1969 Tonys in the categories of Best Musical and Best Direction of a Musical. It won the Grammy Award that year for Best Score from an Original Cast Show Album. The rock musical’s book and lyrics are by Gerome Ragni and James Rado with music by Galt MacDermot. Ragni grew up just several miles away from PMT’s West End HQ and theater, in East Carnegie.

The band members providing live music from their stations on the stage are all top notch.

Hair is at Pittsburgh Musical Theater through February 2 in the Gargaro Theater, 327 W. Main St., West End. For tickets and more information visit the PMT website or call (412) 539-0900 x232