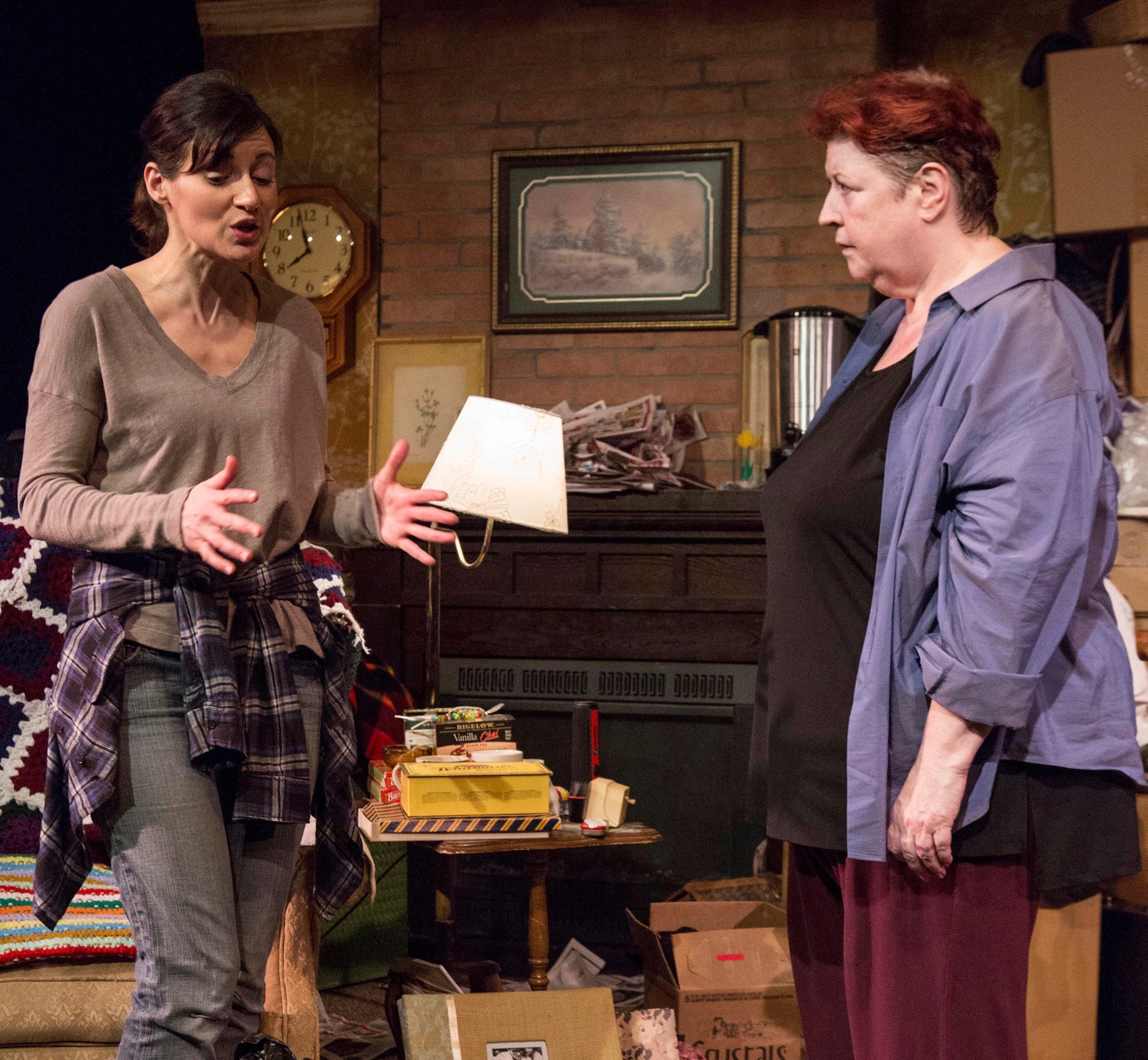 When the sharp edge of organizational rigor meets the solidity of inertia, sparks fly. Erika Cuenca (L) is the cleanup consultant and Virginia Wall Gruenert her not-so-willing client in ‘Hoard.’

Don’t know about you, but I enjoy two-person plays. It really only takes two to tangle, and watching a well-conceived pair of characters go at it, live on stage, makes for an intensely personal experience. Which is what’s offered in the new play Hoard at off the WALL productions (through March 21). Playwright Lissa Brennan, known to many Pittsburgh theater fans for her ferocious acting, has cooked up a hot one here.

Hoard presents a situation that you can tell is going to lead to fireworks. A late-middle-aged woman named Viv (played by Virginia Wall Gruenert) lives alone. The kids have gone and her husband is dead, but Viv is not exactly an empty-nester. She has made her home a no-vacancy zone, filling every space with teetering heaps of clutter. The stuff ranges from old papers and clippings to spare feather dusters (gotta have five) to statuettes of the saints, each item apparently meaningful in some way.

Enter Claire (Erika Cuenca), an “organizational life consultant” hired by Viv’s daughter to enforce a clean-up. The battle plan is therefore drawn—except it’s soon evident the battle will escalate beyond an attempt to declutter.

Claire is like Marie Kondo with the joy drained out. She’s stiff and officious. Her smile is suspiciously fixed and frosty. If your interpersonal radar is working, you can sense that anyone so hard-shelled is likely to be brittle. The consultant might have undisclosed issues of her own, mightn’t she?

It is unclear whether Viv detects the vulnerability right away. At first she just seems happy to have company, bustling around and making chirpy talk while Claire keeps trying to steer the visit back to its purpose: “You know why I’m here,” she smiles, ominously.

The cat-and mouse preliminaries feature some nice laughs—when told that the clutter in the garage includes bats, Claire says “Baseball bats?” and Viv says “Yes, those too”—although the foreplay goes on maybe a little too long. (Playwright Brennan, present at the opening-night show, said afterward she may trim these parts.)

But the initial exchanges do serve well for character development. When the two women eventually get down to playing hardball, we’ve begun to know them, and more vitally have begun to care about them. Viv earns our sympathy: a seemingly good-natured, friendly woman who nonetheless has shut herself off from society, hemmed in amid the trappings she’s accumulated. Claire, meanwhile, earns our curiosity: What makes this gal tick? And is she all clockwork inside or is there something else?

Junk Out, Truth Out

Viv is the one who calls “game on.” She may chirp and flounder but we’ve gathered that she is no fool. Pressed by Claire to pick one item at a time to throw away, she offers a deal: “I get rid of something, you give me something of yourself.” For each piece of junk put in a trash bag, Viv will ask a question, which Claire must answer truthfully. Viv even points out that Claire is getting the better bargain, because she doesn’t lose what she shares, while Viv is losing her bats and old blankets irrevocably.

Of course the questions probe ever deeper. To say that the feather dusters begin to fly is putting it mildly. By the end of Hoard’s 90 minutes, both women are moved and shaken, and so is the audience. Although I didn’t break down and cry—as in, tears streaming copiously down the cheeks—more than once I felt the emotions swelling my eyeballs. Other people I talked with said the same. 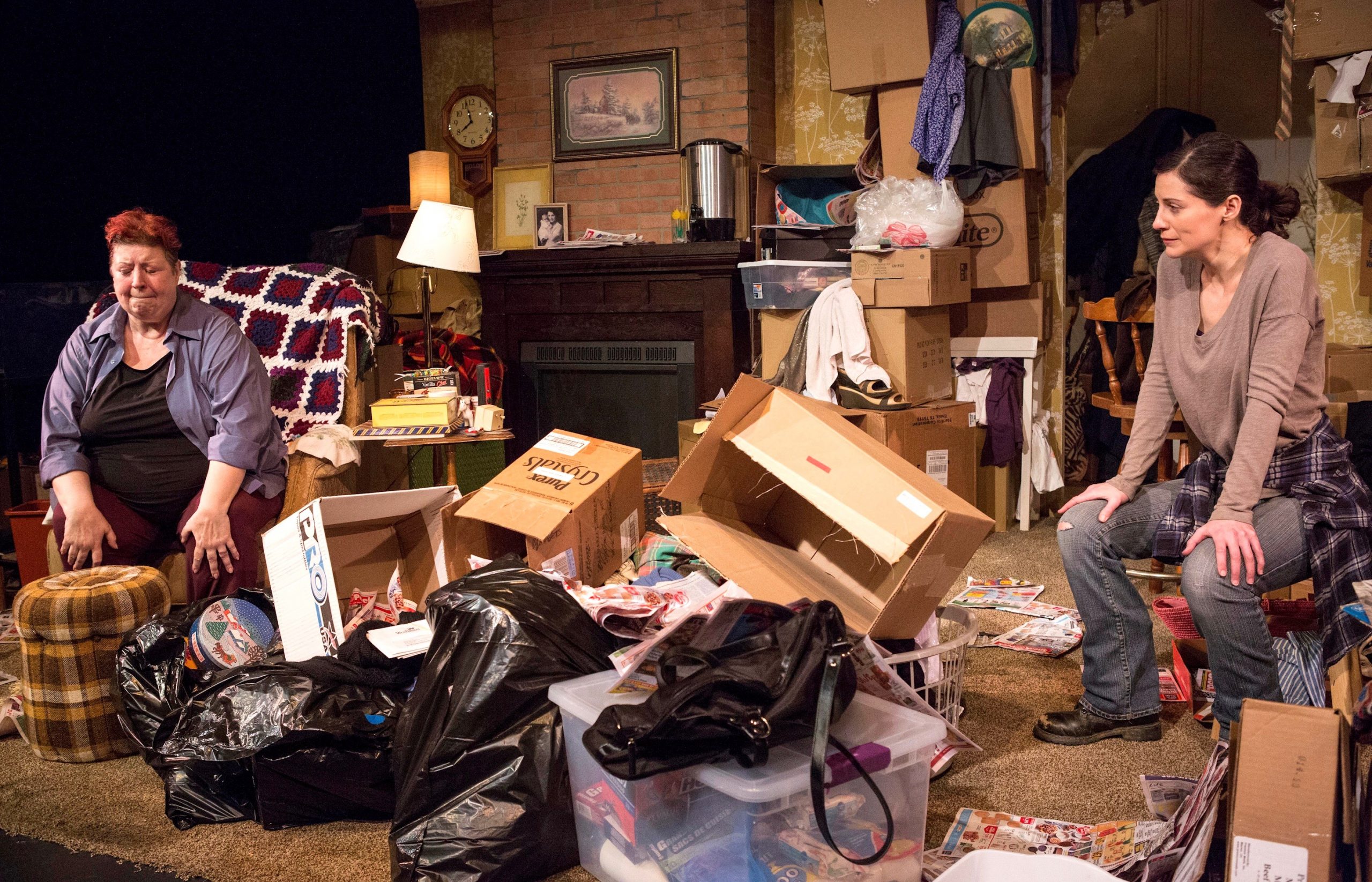 Mission not accomplished? Hey, it’s a work in progress.

The play is also worth reflecting upon intellectually. There are many ways to think about it and I’ll offer just a couple. First and obviously, we are all hoarders to some degree. We live in a society built on stuff, and we get invested in our stuff. Granted, feeling attached to our possessions is only natural. We even use a lot of them. But when I turn my stuff into a museum of me, what’s that all about? What do I gain and what, perhaps, am I missing?

Another way to think about a play is to see each character as an aspect of oneself. Hoard, being simply a two-character piece, is easily viewed as such. Without revealing what lies at the driving core of each woman’s life—because that would be giving spoilers—I think it’s fair to say that any of us could come away from Hoard thinking: Yep, I’ve got an expansive but cloistered Viv within me, and I also have a stern and hectoring Claire.

This is the kind of “stuff” that hits home; that makes it real. This is why we love theater.

Lissa Brennan’s Hoard is directed by Kira Simring. She is artistic director of Nancy Manocherian’s the cell, a theater and incubator for new productions in New York City’s Chelsea neighborhood. Off the WALL productions is staging Hoard in collaboration with the cell, and the play will move to that venue after its Pittsburgh-area run, opening in New York on April 2. Actors Virginia Wall Gruenert and Erika Cuenca will reprise their roles, which is fitting, as they most convincingly are Viv and Claire. (They’re also executive and associate artistic directors, respectively, at off the WALL.)

Brian Reager of the cell is co-director and dramaturg for Hoard. Set design is by Tucker Topel, lighting by Paige Borak, and costumes by Aunt Boo Boo’s Costume Design. The stage manager is the cell’s Kayla Santos.