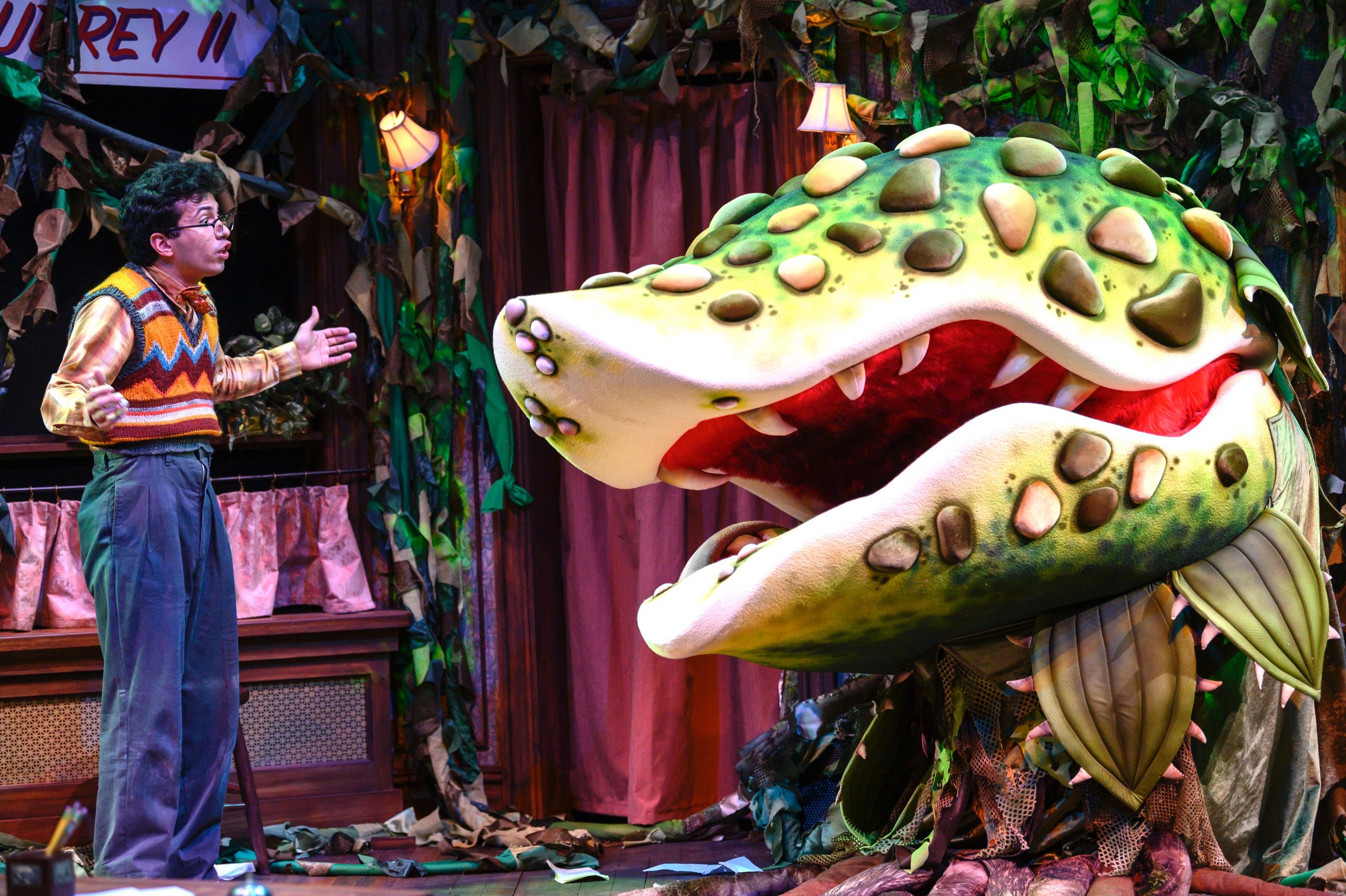 Seymour (Philippe Arroyo) tries to reason with that which is unreasonable in The Public’s ‘Little Shop of Horrors.’

It’s more than fun. Cultural literacy today pretty much requires knowledge of Little Shop of Horrors. The production at Pittsburgh Public Theater (through February 23) is a good one, so if you have “disposable income”—a fine term!—you may want to reserve seats. They’re going fast. Meanwhile, I will venture to explain why Little Shop is such a hot ticket.

A Brief History of Horror

Horror fiction strikes a chord when it reflects what people are worried about at the time. Mary Shelley’s Frankenstein was a sensation in the early 1800s, when scientists were making discoveries that led to powerful inventions, but also threatened old beliefs and ways of living. George Orwell’s dystopian horror story 1984 came out in 1949, when totalitarian regimes were taking hold across the Soviet Union and China.

Dr. Strangelove scored a hit in 1964, during the scary nuclear standoff of the Cold War. The movie depicted the feared escalation into total annihilation, while adding an element that made the horror feel like fun: dark comedy.

And Little Shop of Horrors? The Howard Ashman-Alan Menken musical was an off-Broadway hit in 1982. It’s been gaining and maintaining momentum ever since. Little Shop deploys a triple-action formula—horror + comedy + rock music—to examine a creepy scenario that’s been creeping up on us all these years.

What if the ultimate horror doesn’t come from mad scientists or mad dictators, but from us? From us everyday folks just trying to do our thing and get ahead? Could it really be true that in trying to secure our slice of the American pie, we have planted and nurtured the seeds of climate change, crazy politics, and other horrors yet to come?

How the Show Goes Down

Little Shop of Horrors is set in a type of place you’d recognize as a dying breed: an independent small retail shop. At Mushnik’s Skid Row Florists, located amid urban decay, the flower business isn’t exactly blooming. Sole proprietor Mr. Mushnik (played with suitable exasperation at The Public by Marc Moritz) tells his two employees he’s going to close the shop and throw them out of work.

But his bumbling assistant Seymour (Philippe Arroyo) pleads for a last chance. Notice the name: Though seemingly inept, Seymour strives to see more possibilities on the horizon, and he has an idea. In the back room, he’s been nursing an odd little plant he bought from a street vendor. He even gave the thing a name: Audrey II, after the woman he’s got a crush on, his good-hearted but ditzy co-worker Audrey (Lauren Marcus).

So, says Seymour, let’s put odd little Audrey II in the shop window. Curious passersby will notice its strangeness, stop in, and buy flowers. Fat chance, says Mushnik. But it works. Soon Mushnik, nerdy Seymour, and lower-class-Brooklyn-accented human Audrey are frantically fielding orders while tangled up in phones with long extension cords (the setting is pre-cellphone).

Just one catch. Little bulbous-shaped Audrey II, the nub of this entrepreneurial miracle, has wilted. Seymour can’t figure how to feed its growth curve until, by accident, he cuts his finger and learns the secret. Audrey II thrives on blood. Human flesh and blood.

Seymour drains himself to the point of anemia feeding Audrey II. It grows greatly—as depicted, on stage, by replacing the little bulbous thingie with a rather sizable bulbous mass, then a huge monster. And it wants more. “Feed me,” it croaks. “FEED ME!!!” it sings, operated by unseen puppeteer J. Alex Noble and voiced by unseen, deep-throated actor Monteze Freeland. 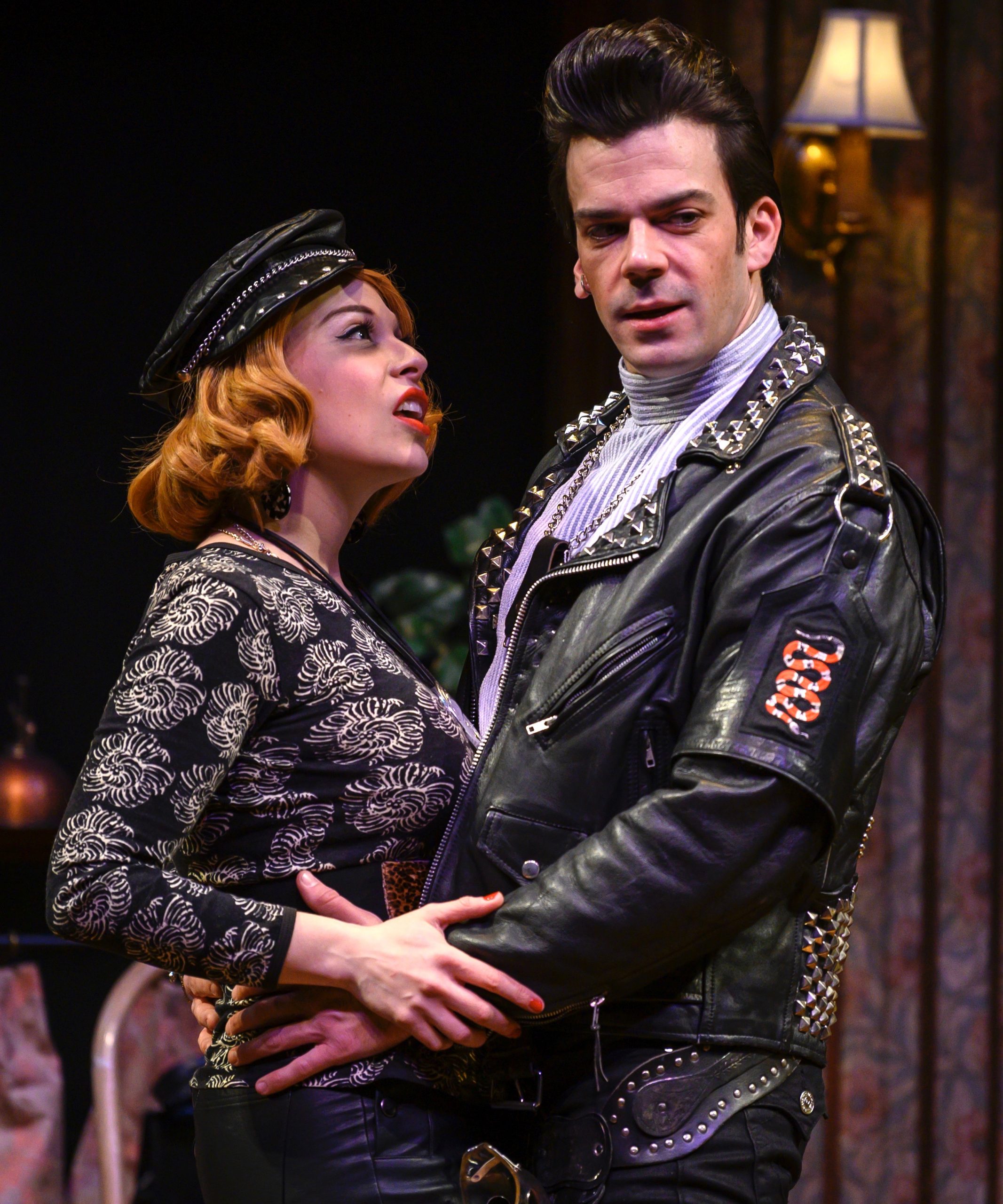 And from there, we’re into spoiler territory for anyone who hasn’t seen Little Shop of Horrors. I’ll say only that Seymour is faced with a choice. He can let Audrey II die, but then his dreams might die with it. If he wants to ride the fame and fortune he’s starting to earn … and if he wants to win the budding love that human Audrey has shown him, thereby rescuing the poor girl from her horrible present boyfriend (a sadistic dentist, played with fitting brutality by Patrick Cannon) … it seems the only way to guarantee all that is to feed the beast.

What do you think will happen?

And what do you think it all means?

Let’s first note simply that Little Shop of Horrors is lots of fun indeed. The show can be enjoyed, if not “mindlessly,” with no deep thought needed. And you have a choice of versions to see. There’s the 1960 horror-comedy film that later became the musical’s basis, made by writer Charles B. Griffith and legendary B-movie director Roger Corman. That non-musical movie is free on YouTube and includes a bunch of scenes the musical doesn’t. (Like the famous one with young Jack Nicholson as a masochistic dental patient. The other actor—playing Seymour, who in the film gets trapped into pretending that he’s the dentist—is Jonathan Haze, born Jack Schachter, of the Squirrel Hill Schachters.)

Or, if star power turns you on, there is also the 1986 movie version of the musical itself, with actors such as Rick Moranis and Steve Martin.

My recommendation: See the 1960 original and the show at The Public. You’ll get the best of both story treatments, along with the unmatched power of a live performance of a singing-and-dancing musical. The Public does a nice job with it. The physical contortions of the lead actors are a hoot in themselves. The show is adroitly staged. The three-woman chorus—three sassy neighborhood girls—rock the scene as played by Melessie Clark, Tavia Rivée, and Abigail Stephenson. (My only beef: The sound balance made their lyrics un-catchable to me, much of the time.)

And should you be inspired to think deeper, read on. 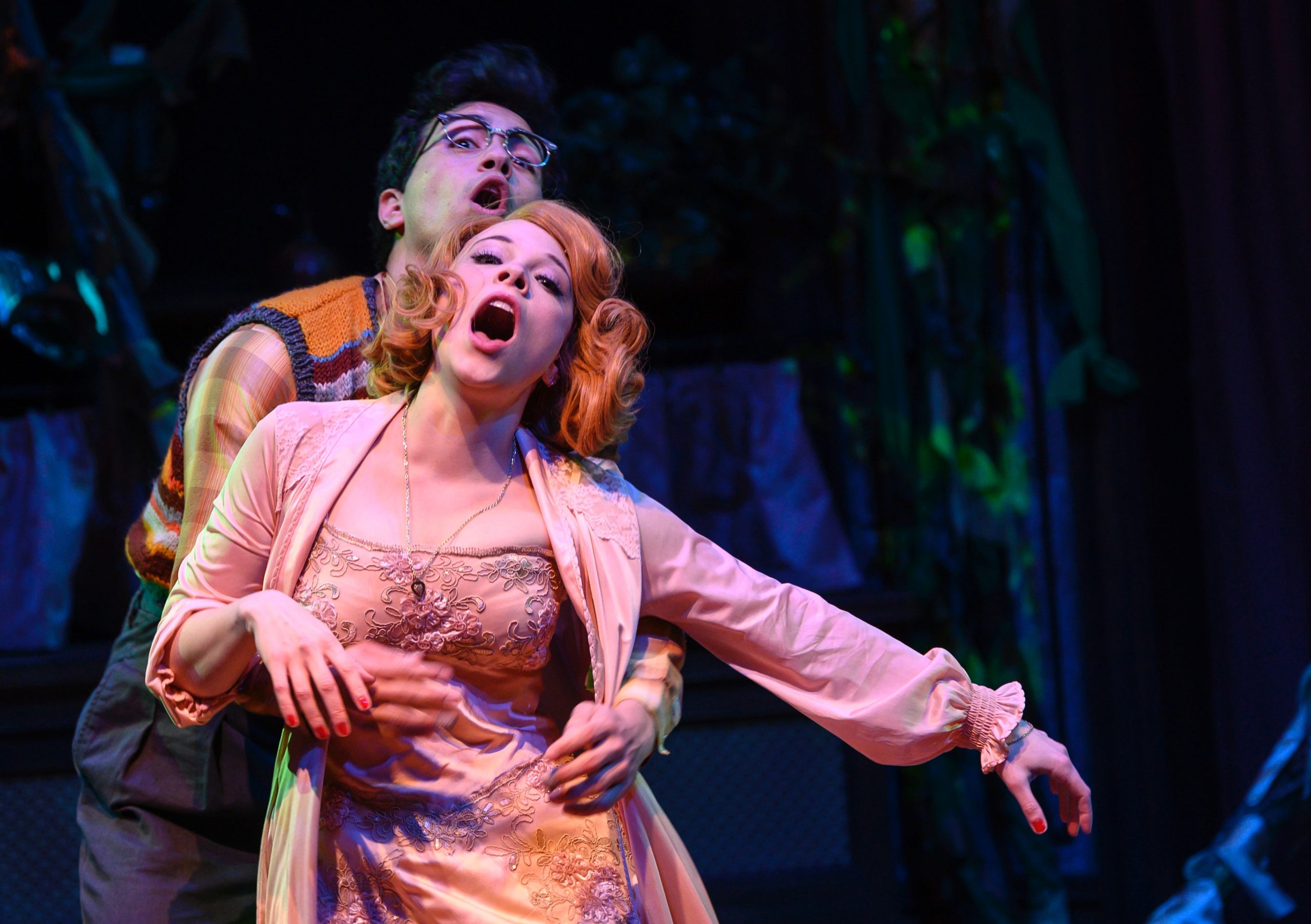 When Audrey and Seymour emote jointly, the question arises: Is it Hollywood romance, Greek tragedy, or a melodramatic spoof of both?

What ‘Little Shop’ Says About Nearly Everything

Little Shop of Horrors has been widely analyzed and commented upon. In one view, it’s a classic Greek tragedy done as a modern musical. A hero strives to attain something beyond the reach of average mortals, which the gods will not permit, and therefore havoc ensues—accompanied by the trio of local girls as a Greek chorus. In other views, the show could be anything from a juiced-up Hollywood love story to a Marxist critique of consumer capitalism.

But the reading I want to leave you with comes from a friend, John W. Miller, who writes on American society. John was born and raised in Belgium. Before moving to America, he worked for years in the Wall Street Journal bureau in Brussels. He’s seen Little Shop many times, including here at The Public. In a phone interview, he explained why he loves the show.

“I call it the Great American Musical,” John said, in capital letters, “because it hits so many American themes.” One theme he cited was “this American dream of prosperity and success, which in the end might not be very fulfilling, but you put your whole self into it.” (Which is precisely what Audrey II wants.) “And then,” John went on, “there’s the weird science” behind the plant: “Americans love weird science projects. This is the country that went to the Moon; these are the people who want biotech to make them live forever. It’s the country that invented the atomic bomb.”

As for the show’s Skid Row setting, and the characters’ aspirations to move beyond it: “The notion of living in a broken world that you want to get out of—that’s very American.”

John then returned to the fact that he came to this country as an outsider, moving from life in a European culture to living in ours. He concluded: “This musical and West Side Story are the two that taught me the most about America.”

And, oh, one more comment on Little Shop. Songs like the gruesome “Dentist!” and the ironic-romantic “Suddenly, Seymour” have tickled the musical funny bones of millions. So John’s not alone when he says “The tunes are great!”

Little Shop of Horrors plays through Feb. 23 at Pittsburgh Public Theater’s O’Reilly Theater, 621 Penn Ave., Cultural District. For tickets and visitor information, visit The Public on the web or call 412-316-1600.