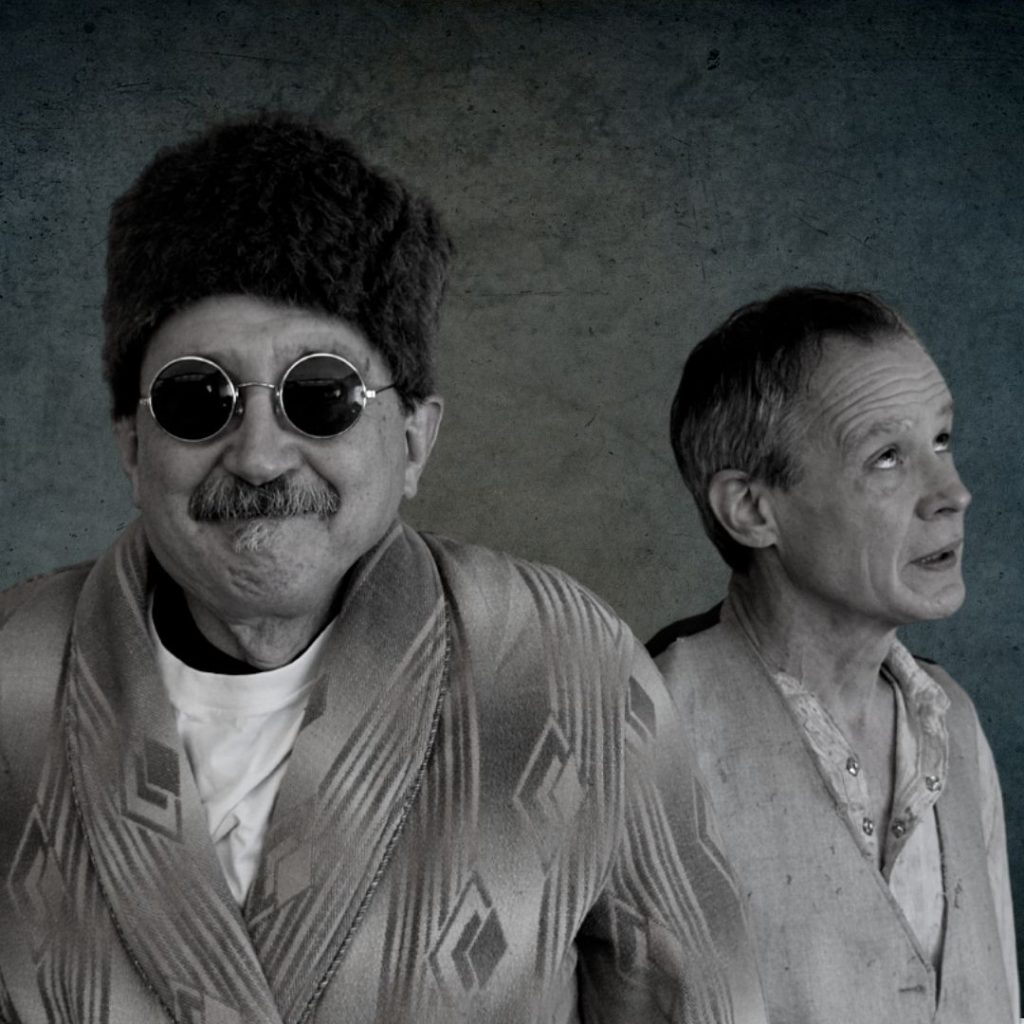 May offers several interesting theatrical productions. In City Theatre’s The Garbologists the play explores the anthropology of humans and their garbage while also examining the relationship between a newer and longtime trash collector. Pittsburgh Ballet Theater has Swan Lake onstage with new choreography from Artistic Director Susan Jaffe. The classic murder tale Arsenic and Old Lace about two lovely, old women who are also killers is being produced at Prime Stage Theater. Many of us remember the film Misery, barebones productions has the play onstage which intensifies the drama. Samuel Beckett was famous for Waiting for Godot, this month PICT Classic Theatre is producing another of his high quality works, Endgame. The Pittsburgh Cultural Trust and PNC Broadway in Pittsburgh are presenting the touring jukebox musical Ain’t Too Proud about The Temptations to the Benedum Center.

All are previewed below as Spotlighted shows for the month, followed by “Other Shows of Note” and brief heads-ups on big productions coming next month. Shows are listed by run dates within each category. Mike Vargo (M.V.) also assisted in creation of this guide.

THE GARBOLOGISTS by Lindsay Joelle. City Theatre. Through May 22 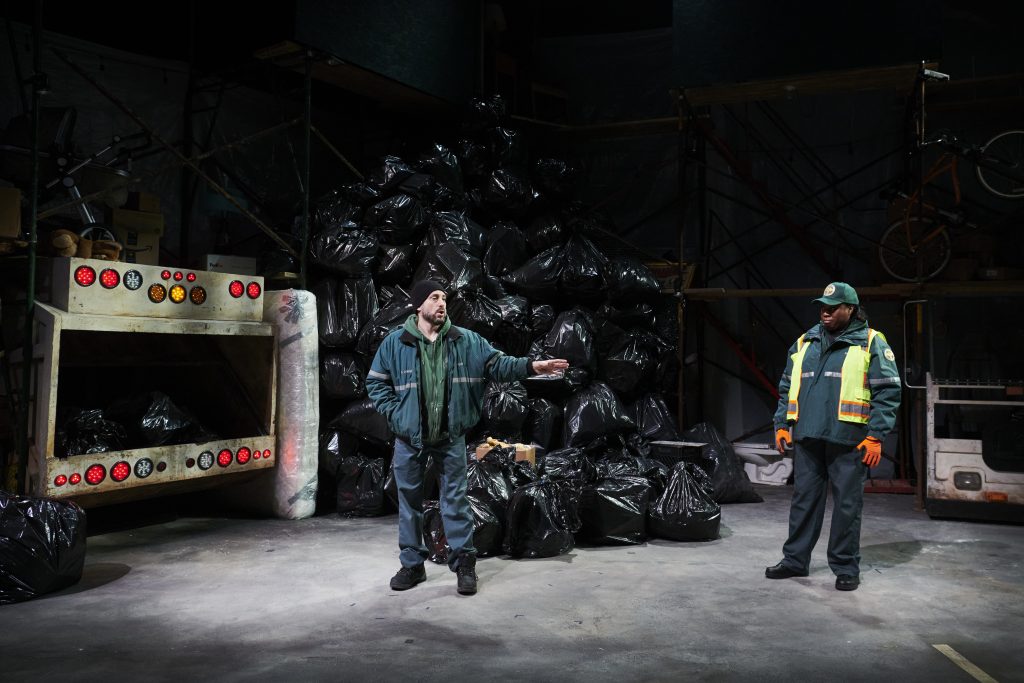 City Theatre closes its season with The Garbologists, a seriocomedy about garbage collectors, or sanitation workers to use the official term. Two such persons in New York City investigate the psychology of throwing away stuff from perspectives other than Marie Kondo’s. The two garbologists make an odd couple: One is a middle-aged, old-school white guy and the other a young, college-educated Black woman who’s new to the crew. Finding common ground isn’t on their agendas but they are liable to find it anyway. City Theatre’s production is a co-premiere with Philadelphia Theatre Company, which staged the play a few months ago to enthusiastic reviews. Playwright Lindsay Joelle says The Garbologists grew out of her desire to write a play highlighting essential workers. Joelle did first-hand research with actual sanitation crews, and one perk of attending is the opportunity to learn some of their trade secrets. See The Garbologists performed by actors Jason Babinsky and Bria Walker, with direction by Monteze Freeland. 1300 Bingham St., South Side. (M.V.) 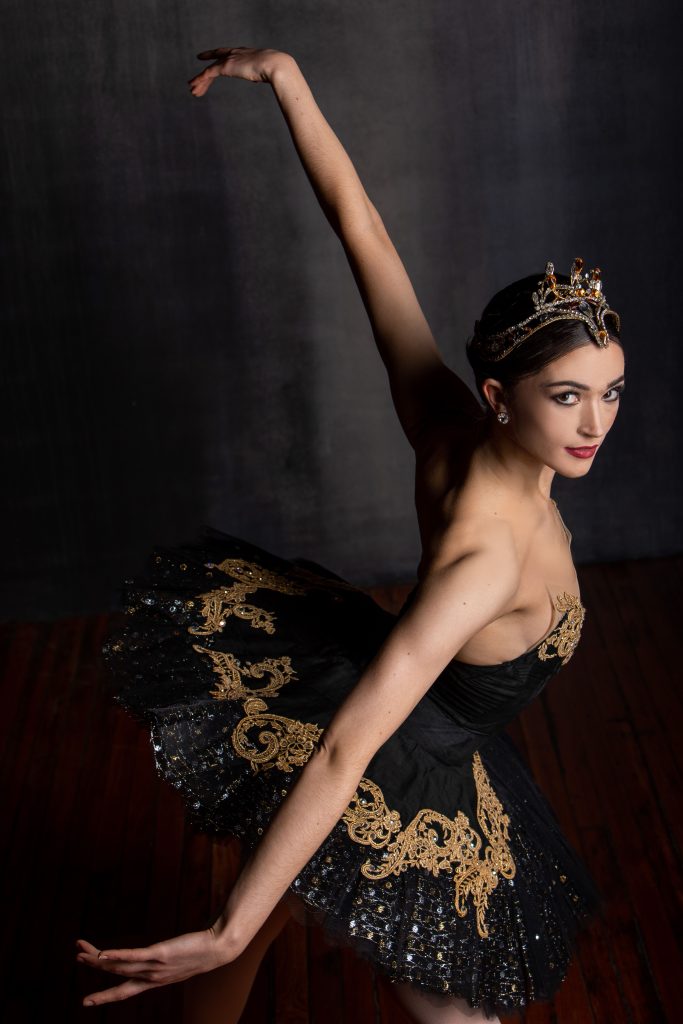 Few ballets match the enduring appeal of Swan Lake, and its mystique may be unmatched. When the dancers fluidly emulate swans in flight, the effect is magical. Tchaikovsky’s beautiful score merges seamlessly with the dance. Swan Lake has the status of a national treasure in Russia, and the story it tells is steeped in myth and mystery. A sorcerer has cast a spell on a lovely maiden. Each morning she becomes a swan, returning to human form only when night falls, and only true love can break the spell—but where did the story come from? It does not appear to be a folk tale, or one from any country’s literature. Perhaps the ballet’s librettist was inspired by multiple sources—yet both the original libretto and the writer’s identity are lost to history. Swan Lake premiered in Moscow in 1877, then was remounted in its present form (with new choreography by the masters Marius Petipa and Lev Ivanov) in 1895. Pittsburgh Ballet Theatre presents Swan Lake at the Benedum Center with new choreography by PBT Artistic Director, Susan Jaffe. She danced for American Ballet Theatre and first performed the role of Odette-Odile at the age of 19. Jaffe danced that role for every year of her 22-year career. 237 7th St., Cultural District. (M.V., R.H.) 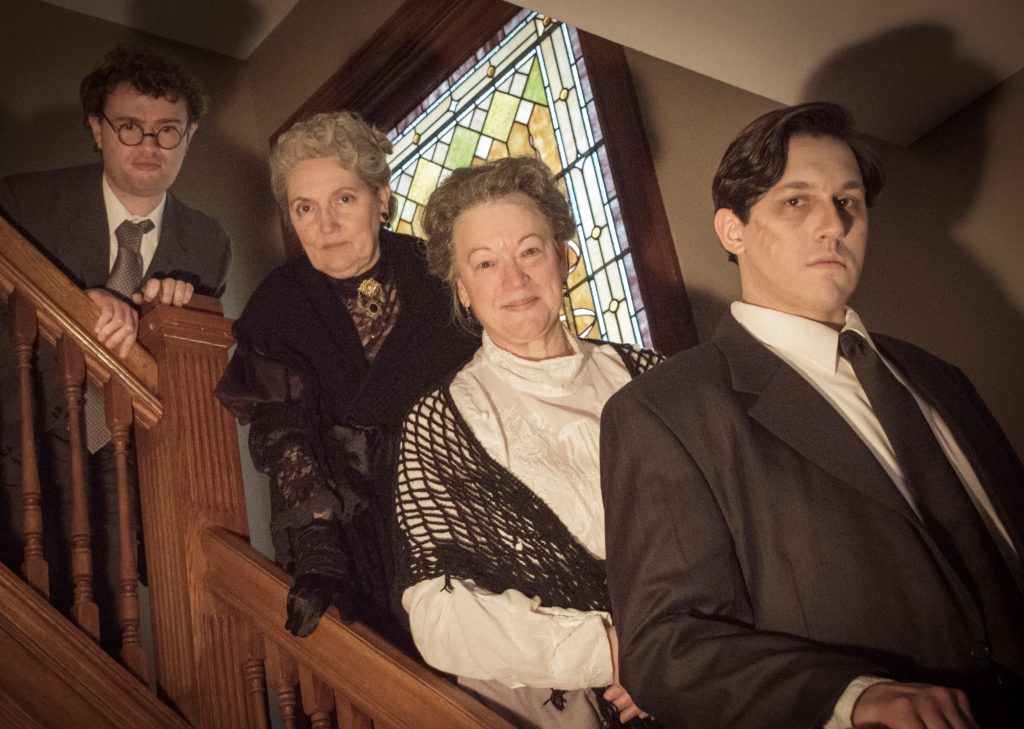 ARSENIC AND OLD LACE by Joseph Kesselring. Prime Stage Theater. In person and streaming. May 7 – 15.

Arsenic and Old Lace was originally a very successful Broadway play and was also made into a movie with Cary Grant, directed by Frank Capra. Arsenic and Old Lace revolves around two spinster aunts who trace their lineage all the way back to the Mayflower. The sisters are also quite mad. Lonely elderly gentleman seem to go missing when in their company. Oh, and there’s also a murderous nephew. That’s a whole lotta murder going on. The one sane family member, Mortimer, tries to sort things out while carrying on a normal life. Prime Stage Theater has Lynne Franks and Suzanne Ward in the roles of Abby and Martha Brewster respectively. Matt Henderson plays Dr. Einstein, an alcoholic plastic surgeon. New Hazlett Theater, 6 Allegheny Square, North Side. 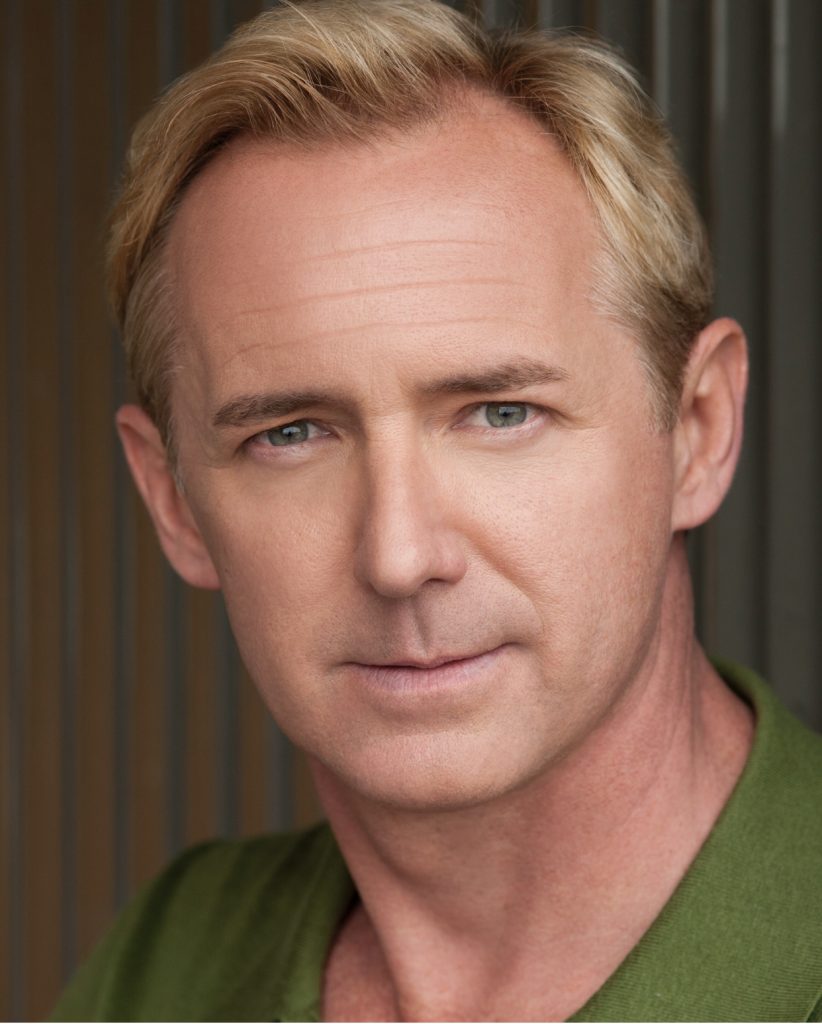 MISERY by by William Goldman, based on the novel by Stephen King. barebones productions. May 13 – June 5.

Many of us know Misery as a novel by Stephen King and a film starring James Caan and Kathy Bates. It’s also been adapted as a play and barebones productions is putting it on this month. In Misery an acclaimed romance novelist was injured in a car accident in Colorado. He is found and cared for by a nurse who is his biggest fan, and also deranged. The roller coaster ride occurs in her house, where she is caring for him. The nurse can be nice, but also can be very evil. At barebones black box theater all the Misery action will have more impact in a smaller theatrical setting. 1211 Braddock Ave., Braddock.

Samuel Beckett was an Irish writer whose life spanned well into the modern age of radio and television. He took full advantage of those newer mediums for his written works. However, he was mainly a novelist, playwright, poet, and short story teller. PICT Classic Theatre is presenting his stage play, Endgame, which won an Obie Award (for Off-Broadway productions). Endgame is often listed as one of Beckett’s best works. Beckett also wrote the more famous play, Waiting for Godot. Endgame centers on an elderly man who is blind, paralyzed, and very controlling. Joining him in a post-apocalyptical world are his parents, and his subserviant companion. PICT describes the play as “Endgame is an exploration of ending – ending life, ending time, and what we find at the conclusion.” Endgame features resident company members Martin Giles, James FitzGerald, Karen Baum, Ken Bolden and is directed by the noted PICT Artistic and Executive Director, Alan Stanford. Fred Rogers Studio at WQED, 4802 Fifth Ave., Shadyside. 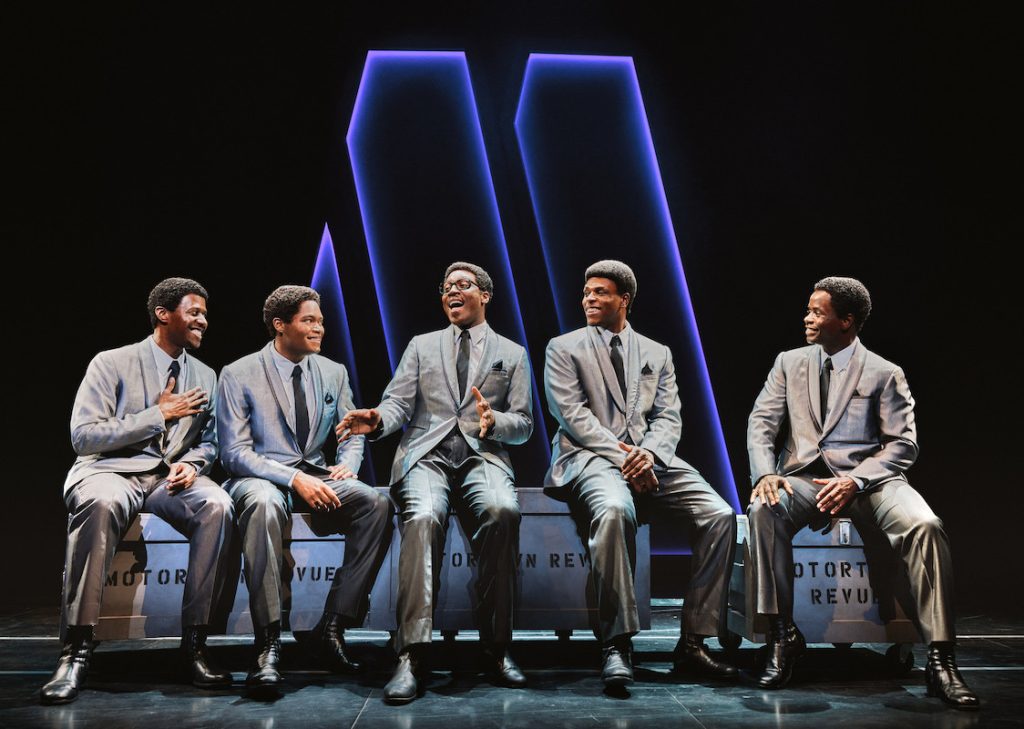 AIN’T TOO PROUD (jukebox musical) Music by The Temptations with book by Dominique Morisseau. PNC Broadway in Pittsburgh. Pittsburgh Cultural Trust. May 17 – 23.

A juke box musical can be a fun production to see. You get the backstory of the performer/band’s career and life, plus a heapin’ helping of their music. And what a story and catalog The Temptations have. Rising out of Motown Record’s, The Temptations in their zenith had four Billboard Hot 100 number-one singles and fourteen R&B number-one singles. The group’s music has also garnered three Grammy Awards. Ain’t Too Proud was written by Dominique Morisseau, who also authored Paradise Blue which was recently onstage at City Theatre. Ain’t Too Proud was nominated for a whopping 11 Tony Awards in 2019, winning one. Hits like “My Girl,” “Get Ready,” “Just My Imagination (Running Away With Me),” “Ball Of Confusion (That’s What The World Is Today),” and of course the production’s title song, “Ain’t Too Proud To Beg” are all in the musical’s jukebox. Benedum Center, 237 7th St., Cultural District.

Forever Plaid is a retro jukebox musical that imagines the day the music didn’t die. Forever Plaid is set in 1964, when a fictional quartet called The Plaids don’t make it to a big gig. In an act of blatant symbolism, they are killed by a bus carrying teenagers to The Beatles’ U.S. debut on “The Ed Sullivan Show.” But someone upstairs loves that harmony, as The Plaids are miraculously re-assembled to sing a deathless setlist. 119 North Main St., Zelienople. (M.V.)

It’s 1958 and Springfield High School is holding it’s prom. That’s where we meet  the girl group The Marvelous Wonderettes consisting of Betty Jean, Cindy Lou, Missy, and Suzy. They speak of  their lives and loves while performing classic ‘50s hits including “Lollipop,” “Dream Lover,” “Stupid Cupid,” and “Lipstick on Your Collar.” In the second act, The Wonderettes reunite to perform at their ten-year reunion. They speak about the highs and lows of their lives and that they will survive anything. Andrew Carnegie Free Library, 300 Beechwood Ave., Carnegie.

SOME ASSEMBLY REQUIRED (modern dance). Attack Theatre. Both in-person and livestreamed. May 12 – 15.

Attack Theatre is reviving a popular favorite from their canon of work, Some Assembly Required. The work is a fusion of dance and art. It has been performed at the Andy Warhol Museum and Carnegie Museum of Art. Attack’s dancers start each performance by dancing briefly to live music; then they join the audience to view and talk about certain artworks. This leads to a second, improvisational dance inspired by people’s reactions, so that each performance is unique. Attack Theatre Studios, 212 45th St., Lawrenceville.  (M.V., R.H.)

THE CURIOUS INCIDENT OF THE DOG IN THE NIGHT-TIME by Simon Stephens based on the novel by Mark Haddon. Little Lake Theatre. May 19 – 29.

A few years back, the British novel called The Curious Incident of the Dog in the Night-Time was one of the most curious books to hit the best-seller lists. The stage play adapted from it then won major awards in both England and the United States, including the 2015 Tony Award for Best Play. The character at the hub of the story, 15-year-old Christopher, is an autistic savant. Or as Christopher himself puts it, he’s “a mathematician with certain behavioral difficulties.” He is forced to solve a mystery to clear himself from suspicion. Critics have said that beyond just bringing an unusual character to life, it brings his world view to life, inviting the audience into Christopher’s mind to share his experience. 500 Lakeside Dr., Canonsburg. (M.V.)

Many wars have been fought over land and prime real estate. The battle in Ripcord is over a sunny room on the top floor of a retirement home. The battle starts when a cranky resident, Abby, is forced to share her room with newcomer Marilyn. The comedic hostilities ensue as they both try to get the upper hand. Corner of Brownsville Rd. and Corrigan Dr, South Park Twp.

A MAN OF NO  IMPORTANCE (musical) with music by Stephen Flaherty, lyrics by Lynn Ahrens and a book by Terrence McNally, based on the 1994 Albert Finney film of the same name. May 20 – 29.

A dramedy about love and friendship, A Man of No Importance is an award-winning musical set in 1960s Dublin, Ireland. It tells the tale of an amateur theater group and the obstacles they encounter as they try and stage a play at their leader’s church. Stephen Flaherty is a Pittsburgh native. New Hazlett Theater, 6 Allegheny Square East, North Side.

Patsy Cline was a very talented singer of the early 1960s with songs like “Crazy,” “I Fall to Pieces,” “Sweet Dreams,” and “Walking After Midnight.” Unfortunately Cline died in a plane crash in 1963 at the age of 30. Always…Patsy Cline centers on the friendship and correspondence between Cline and a fan that continued until Cline’s passing. The production, in addition to many Patsy Cline songs, also offers humor and some audience participation. Pasquerilla Performing Arts Center at the University of Pittsburgh at Johnstown, 450 Schoolhouse Rd G35, Johnstown.

Big Shows on the Radar

Saturday, June 18
The Boys in the Band (PICT Classic Theatre)

Wednesday, June 17
Not My Revolution (off the WALL Productions)