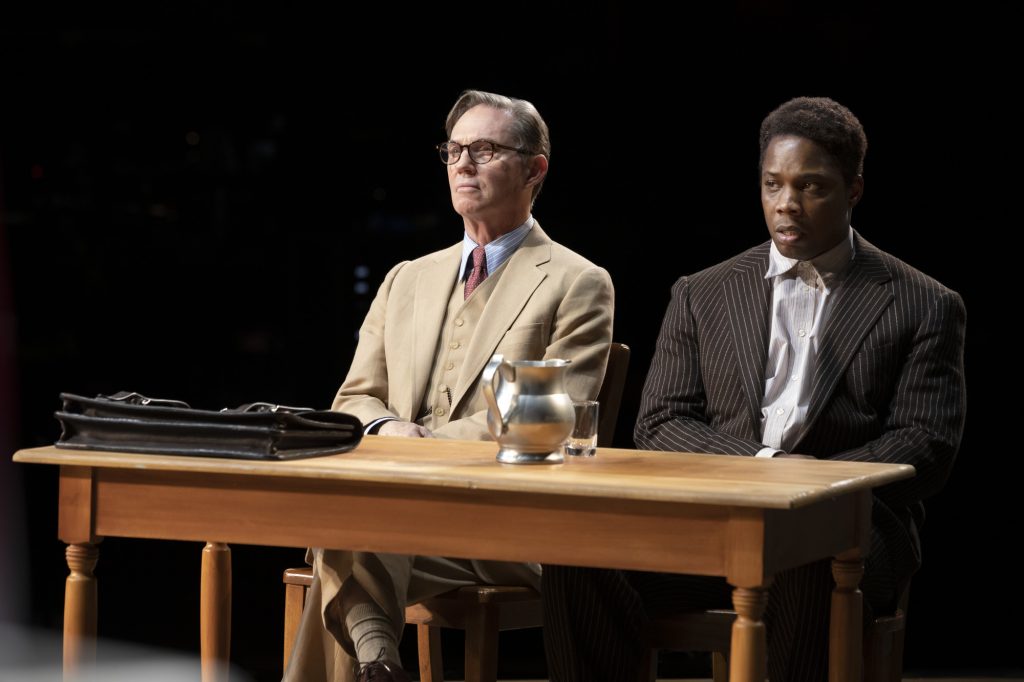 In the new ‘To Kill a Mockingbird,’ treatment of Black persons remains the central issue, but everything’s not so black and white. The touring cast has Richard Thomas as Atticus Finch and Yaegel T. Welch as Tom Robinson.

One of the most anticipated shows of the Cultural Trust’s PNC Broadway in Pittsburgh series is now on stage at Benedum Center. To Kill a Mockingbird, adapted by Aaron Sorkin, features renowned star of stage and screen, Richard Thomas, in the lead role as small-town lawyer Atticus Finch. To Kill a Mockingbird runs through Sunday, April 24.

A Different Kind of ‘Bird

Many of us had read Harper Lee’s novel in high school or have seen the 1962 film version of To Kill a Mockingbird starring Gregory Peck, or maybe even seen the previous stage-play version. Sorkin’s adaptation, however, doesn’t always follow the novel completely—expanding some storylines and contracting others. The story still revolves around a flimsy accusation of a Black man raping a white woman in 1930s Alabama. However in Sorkin’s script, almost everything is centered upon the courtroom trial, with the rest of the story told in flashbacks. Sorkin is an Academy and Emmy Award-winner who wrote the screenplays for A Few Good Men, Moneyball, and the TV series “The West Wing.” He also directed last year’s film, Being the Ricardos.

His Mockingbird play differs from the novel in several ways. Finch, who somewhat reluctantly represents the accused man, Tom Robinson (Yaegel T. Welch)  becomes a more complex character, not just a respectable attorney. The two major Black characters—Robinson and Finch’s housemaid, Calpurnia—are given more room for a deeper study. The new Mockingbird provided plenty of real life legal drama, too, before opening on Broadway in 2018. Harper Lee’s estate sued Sorkin, claiming the script altered the original tale too much. Mockingbird did go on to become a hit Broadway show with Jeff Daniels in the role of Atticus Finch.

In the story, Finch doesn’t want to take on a criminal case, because the last time he did, the two very guilty defendants were hanged. He is mainly a civil case attorney helping clients work out legal entanglements. Finch tells Robinson about that criminal case. Robinson is offered a plea that would put him in jail for 18 years. Robinson tells Finch that he is innocent, but is considering taking the plea so that he can see his young children again. Finch responds to Robinson that he can see there is exculpatory evidence that he believes will have the jury find him innocent. This is a death penalty case with the electric chair waiting for Robinson if convicted. And there is a highly skilled prosecuting attorney anxiously waiting to try the case.

Robinson agrees to let Finch take the case to trial. Finch asks if Robinson has any money. When Robinson responds no, Finch says, “Then I’m the best attorney you can afford.” Finch had humorously talked to his daughter Scout (Melanie Moore) about how sometimes the people he represents don’t pay him cash and that he is an attorney who will work for vegetables among other things. Although this drama can be heavy at times, there are many flourishes of humor throughout. 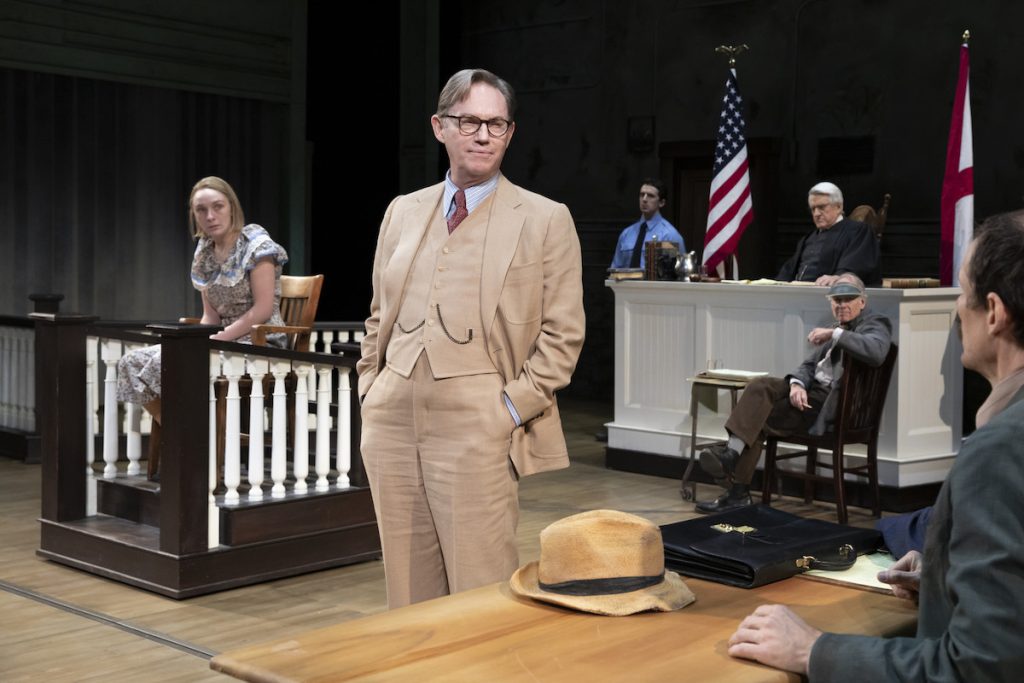 Mockingbird features a courtroom duel between Finch and prosecutor Horace Gilmer (Luke Smith). They each use their best legal maneuvers to convince the all-white jury of farmers of their arguments. In Maycomb, Alabama, where the story is set, the social hierarchy is Blacks at the bottom, then farmers, then townspeople, then the educated, so with strikes the juries always turn out to be farmers. Black residents at that time were not allowed to be on juries.

Thomas as Finch is splendid, both for his courtroom oratory and as a widowed father trying to teach his kids by example. Thomas got a round of applause when he first took the stage. He was dressed sharply in a tan suit and tie. Thomas is a veteran stage and screen actor, but possibly best remembered for his role as John-Boy in the beloved 1970’s TV series “The Waltons.” He’s also been in many stage and screen productions including The Little Foxes, You Can’t Take It With You, and the Pittsburgh-made film Wonder Boys. 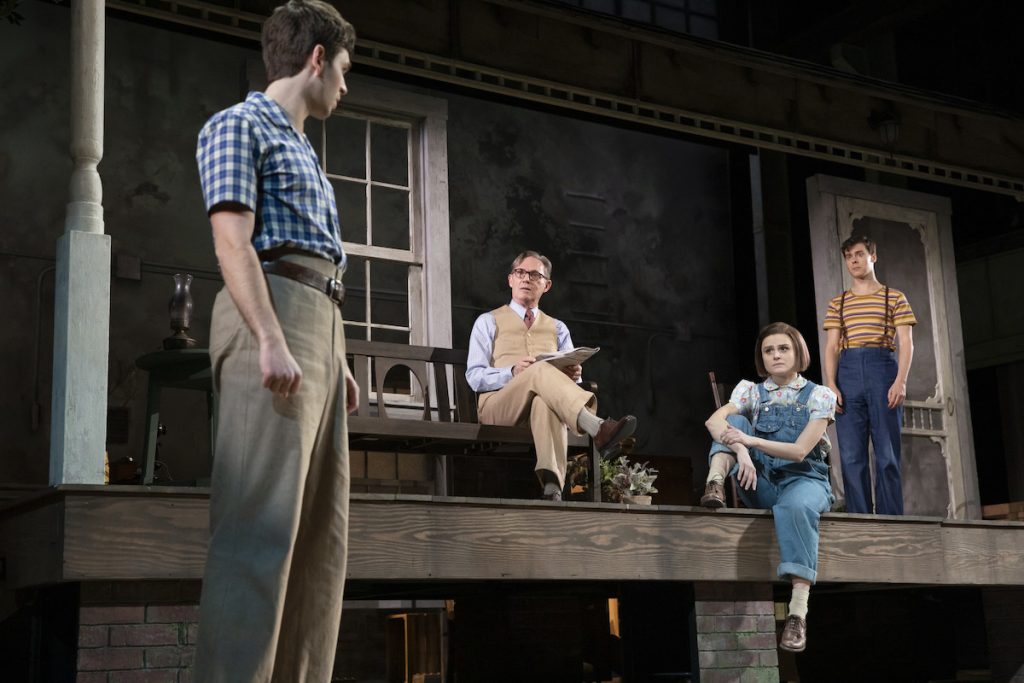 In the leading (young) lady role, Moore is wonderful as Scout. She precociously lumbers around the stage with a lanky gait in her denim overalls and clompy shoes. Moore brings out Scout’s charismatic personality, curiosity, and sense of righteousness to full effect. Moore’s Southern accent is intoxicating as she narrates and participates in the story. Her child-like movements are spot on. She has also appeared in many stage and screen productions including Hello Dolly and Fiddler on the Roof, and was an all-star on the Fox TV series “So You Think You Can Dance.” 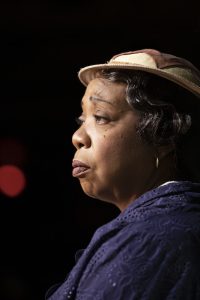 Calpurnia (Jacqueline Williams), the Finch’s house maid, has a concerned look on her face and she should as some events with repercussions have been occurring.

Calpurnia (Jacqueline Williams) and Robinson are the Black moral compasses of the show. They and their families have lived under subjugation and discrimination for many years and they are tired of it. They rightfully wonder, how much longer will this mistreatment continue? Both Williams and Welch excelled in their parts.

There are many uses of the n-word and expressions of hatefulness in Mockingbird. One that is played so well that it is actually funny comes when Mrs. Henry Dubose (Mary Badham), an elderly and ill woman in a wheelchair, berates Scout for her looks and her manners, saying the only thing she’ll amount to is a waitress at the Negro restaurant in town.

Another interesting character is the town drunk, Link Deas (Anthony Natale), whose surface story gets pulled back to get a real glimpse of the man. Robinson’s accuser, Mayella Ewell (Arianna Gayle Stucki) and her overbearing father, Bob Ewell (Joey Collins) play their roles to perfection. All the other members of the cast give talented performances as well.

The whole story is almost entirely about trying to live in a world where man’s inhumanity to man seems everywhere. However, at the very end, a subplot about a mysterious character in the neighborhood, Boo Radley (Travis Johns), provides extremely touching scenes of a greater humanity. Scout’s opening question of the play is also answered in the final scene.

The main settings for the play are the courtroom and the Finch house. The sets are simple, fun, and effective. Costumes appear to be all authentic period pieces. Mockingbird is directed by Bartlett Sher and runs very smoothly. The show is approximately three hours with a 15-minute intermission.

For tickets and more information see the Cultural Trust’s To Kill a Mockingbird web page.