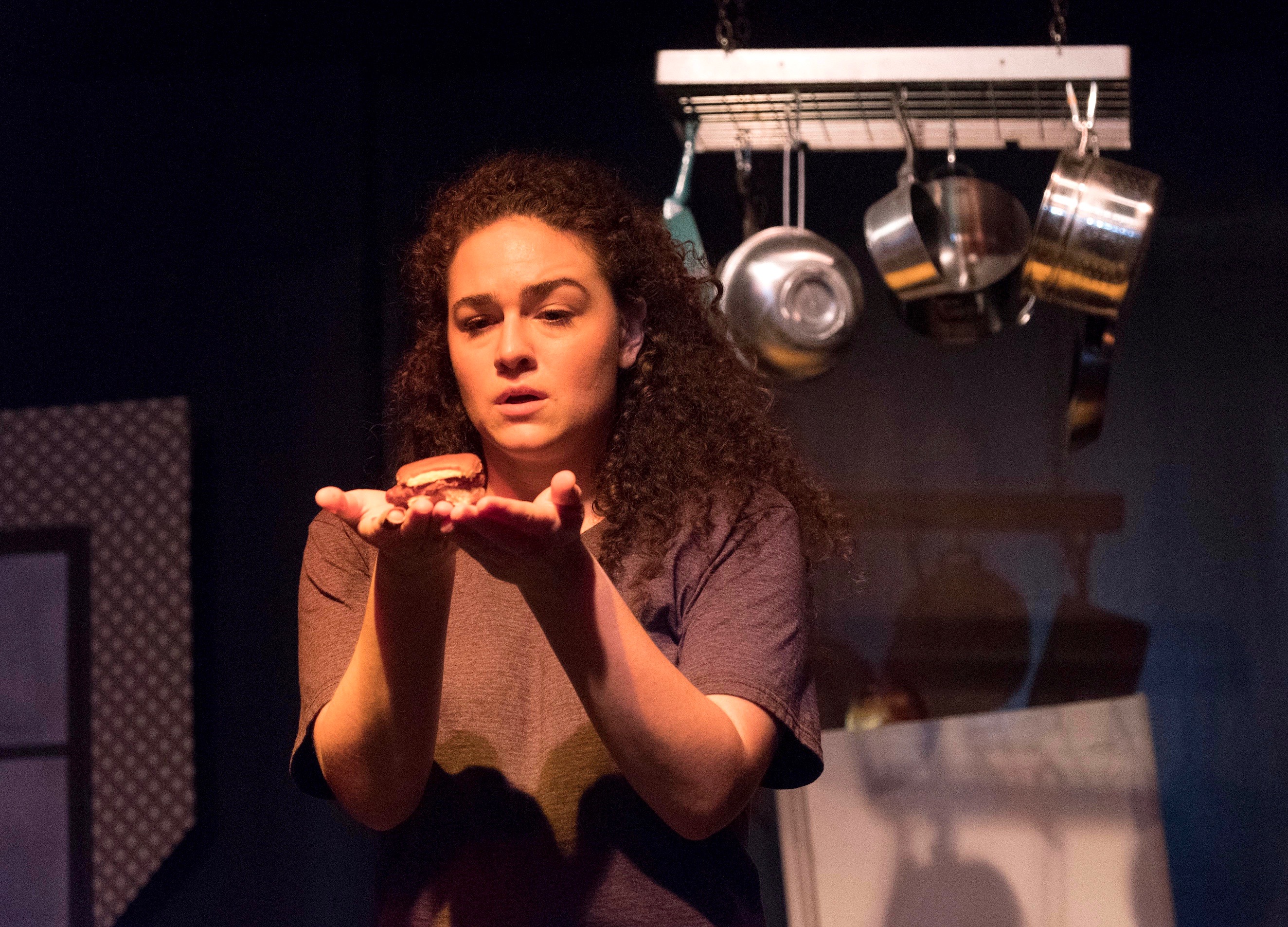 Is this a digestible which I see before me? Jessie Wray Goodman, as Tiffany, contemplates a ‘Mumburger.’

Fellow Pittsburghers, lend me your ears. I promise not to ask for additional body parts. Just an open attitude, please, because what I want to recommend to you, very highly, is a play about eating a dead person.

Mumburger is at off the WALL productions through March 16. The experience is quite different from watching Hannibal Lecter. There’s physical humor that rivals the antics of old silent-film comedians. (In one scene, a man and his daughter play soccer with a wadded-up banknote, kicking the money back and forth as they argue—an action sequence that scores perfectly.)

And the play has no shortage of memorable lines. They range from “Google what to do after someone dies” to “You can’t eat Mum when you’re stoned!”

I recommend Mumburger for two reasons. First, although bizarre is the new black in today’s pop culture, where being weird can become an end in itself, this play does weirdness right. It uses a grotesque device to evoke heartfelt laughter and human feelings which ring true. Credit to playwright Sarah Kosar, a Butler native now living in London, where Mumburger debuted.

Second, off the WALL’s treatment of the play is everything that’s good about live theater. If thus far in your life you have failed to appreciate what can be done to you by two actors on stage in an intimate performance space, start with Mumburger.

Action Items and the Grateful Dead

The setup is simple. A woman has died in an auto accident. When the play opens, we see her young-20s daughter and widowed husband reacting differently to the shock and grief. Daughter Tiffany (played by Jessie Wray Goodman) copes by shifting frenetically into take-control, let’s-handle-the-funerary-details mode, while husband/dad Hugh (Ken Bolden) wallows around sort of numb and helpless.

That contrast alone provides enough dramatic tension for a good play. It’s a type of situation anyone can relate to: a crisis that ought to draw people together, except their clashing emotional trips get in the way. The contrast also sets a dark-humor edge from the start—Tiffany is flying absurdly out of control with her take-control demands for an “actionable plan”—and there’s more to come.

It turns out Mum had made her own advance plan for the disposition of her remains. We learn that Mum was both a free spirit and a mystical environmentalist, one who sought to coexist in harmonic union with Earth and its creatures, wasting or omitting nothing from the Circle of Life. We learn this from the note she left. It comes in a large brown bag, along with a stack of freshly ground burgers, which are intended to nourish her dear Tiffany and Hugh.

The raw burgers won’t spoil. Most have been flash-frozen, leaving just a few to be fried up promptly, and I won’t spoil the rest of Mumburger by giving away details. Will Tiff and Hugh agonize over whether to eat the meat? How will the sacrament go down? What effects will it have on each of them and what does it mean? As the Grateful Dead sang, “Answers aplenty in the bye and bye.” 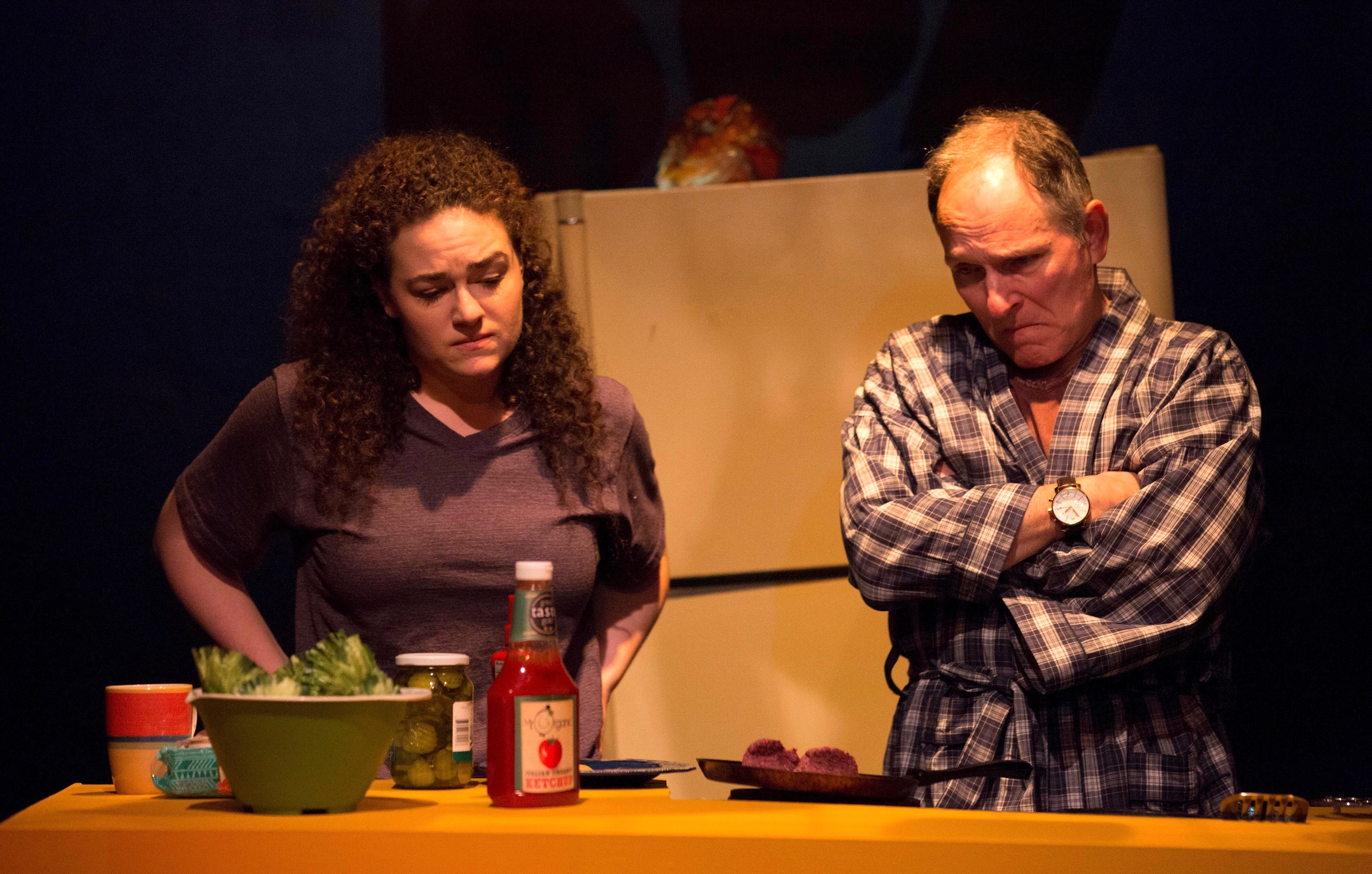 Tiffany and Hugh (Ken Bolden) can’t figure out what their guts are telling them to do. The fridge in the background is intentionally atilt, perhaps to signify normal life tipped out of kilter.

The Sounds of Silence; the Black Feathers; the Man Who Feels It

Observers at the theater on opening night said the audience roared with laughter clear through Mumburger. The Sunday matinee that I attended got exactly the opposite response. A quiet crowd. A contagious quiet, the kind that quickly damps out the few titters erupting now and then; the silence that spells doom for most comedies.

But here, I think, is a mark of how good the play is. I was pulled deeply into it anyhow and so were the people I talked with afterward. It felt as if the silence helped us to dig it, like the silence you want when you’re engrossed in a good book, or watching a delicately daring feat of whatever.

The play works on many levels. And it is in fact a delicately daring feat, balancing all sorts of things at once. Absurdity, cultural satire, and the dead seriousness of death shimmer together. While the shall-we-really-eat-it dilemma marches toward resolution, daughter and dad are also moving into the next stages of coping with their loss—and with one another—all of which, in turn, keeps re-adjusting the tones of the humor/horror balance.

A couple of bits I’ve got to mention. Tiffany at one point is expressing her inner turmoil by composing and reciting spoken word. The stage goes dark and she appears, in a stark pool of light, wearing a long cape and a black-feathered headpiece like a tragic heroine of yore. Then she crosses grandly before the audience, declaiming, in less-than-majestic verse, that eating Mum “keeps her inside me, immortal / But the premise is horrible,” and so forth, on up to a dramatic exit. The scene is the very definition of ghastly humor.

In this interlude and throughout, Goodman is great; she is Tiffany. And likewise for Bolden as Hugh. He shines especially in the seemingly stylized (but also naturally expressive) physical business that permeates the play.  He scoots around like Roadrunner while chasing after Tiffany to get her attention; he curls up in a writhing mass on the floor when the grief overwhelms him. He just never stops moving how he feels. And to say that it “communicates”—well, that would be a case where words fail.

You ought to see Mumburger.

Sarah Kosar’s Mumburger is directed for off the WALL productions by Robyne Parrish. When actors excel, you’d better believe the director deserves credit. Parrish has brought them to a fine pitch.

The production is Mumburger’s U.S. premiere and the playwright flew in for it. Kosar, a graduate of Butler High and Penn State, has lived in London since 2010, earning a rep as a theater artist to watch on the British scene. She graced the Sunday matinee with her parents, retired architect John Kosar and mum Phyllis. They were a warm and cheerful crew; anyone who expected a brood of brooding intellectuals would be pleasantly surprised.

I asked Sarah a heavy question: How does Mumburger register with people who’ve recently lost a loved one?  She said that in London a number of such people have purposely come to see the play and voiced their approval.