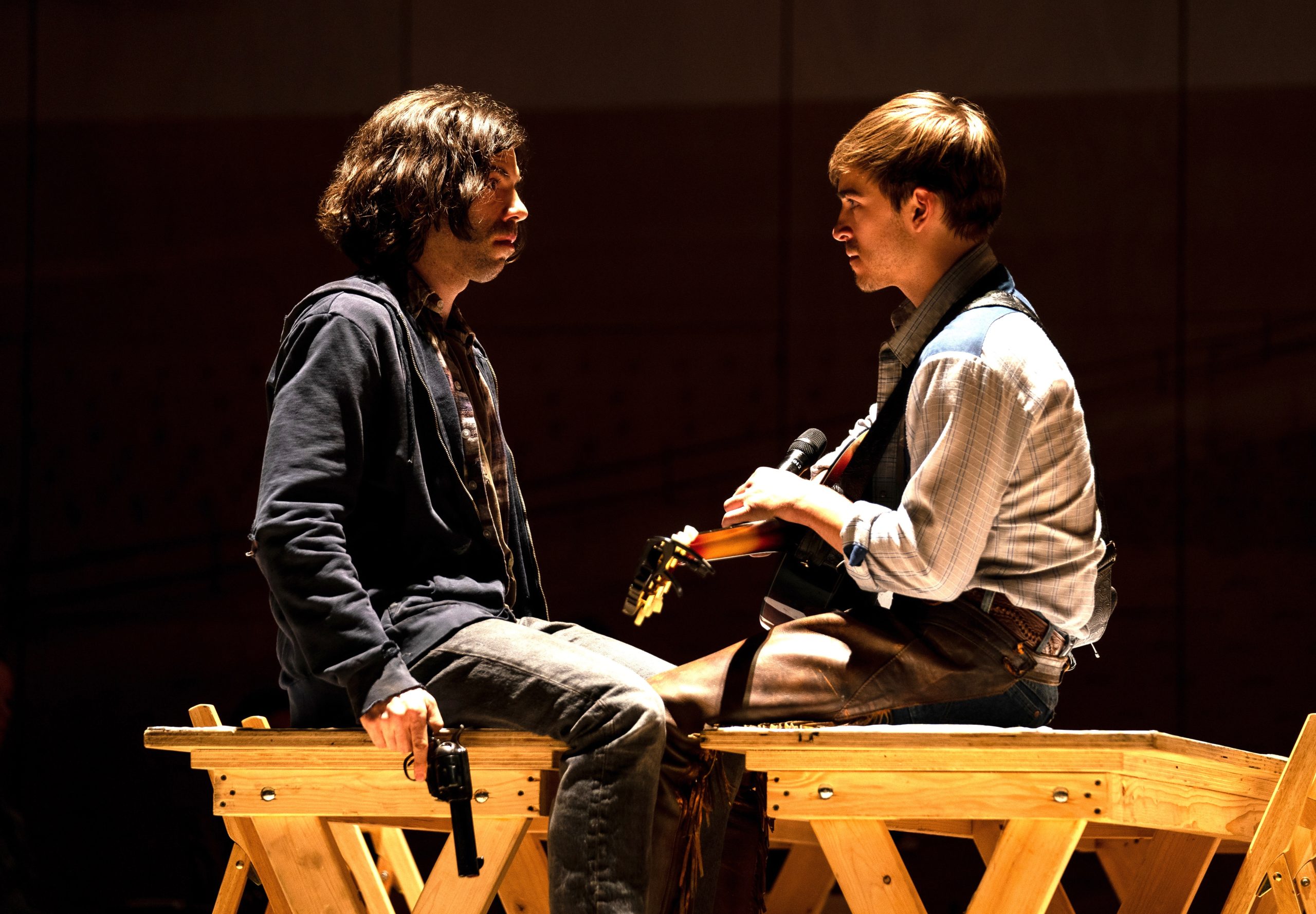 Danger is close at hand in the updated ‘Oklahoma!’ Christopher Bannow (L) plays Jud and Sean Grandillo, despite the deceptively straight hair, is Curly in the touring production at Benedum Center. (photo: Matthew Murphy and Evan Zimmerman for MurphyMade)

Theater is an act of invention, and often, reinvention. So it’s fitting that 2022 in Pittsburgh begins with a visit from the touring production of Oklahoma! This new take on the Rodgers and Hammerstein classic mirrors the version that wowed Broadway three years ago, winning the Tony Award for Best Revival of a Musical. It’s also a version that has stirred up artistic controversy.

Conceived by director Daniel Fish, the show is a more hard-edged, ominous, and suggestive Oklahoma! than longtime fans of the musical would expect. Although the script and lyrics come straight from the original, many aspects are interpreted and played differently.  The setting is still rural Oklahoma in 1906 and the story still revolves around a cowboy and a farmhand vying for the hand of the same young woman. But cowboy Curly is no longer such an all-American good guy; he’s got a streak of exploitative aggression. His rival, farmhand Jud, is less of a vicious villain and more a dangerously misunderstood loner. Overall, the new version plants repeated references to the violent origins of the present-day state.

Some who don’t like the new take have scornfully called it “Woke-lahoma.” Others simply feel that an upbeat musical has been tainted, in contrast to the many who love the revival. And some have pointed out that the darker, earthier elements were in the musical all along, only to be brought out more explicitly now. After all, this is a show that includes a brawl over land use, a romantic triangle simmering with peril, and a fatal fight in the climactic scene.

Rodgers and Hammerstein, however, mixed the grim touches with high-spirited humor and feel-good musical numbers throughout, from “Oh, What a Beautiful Mornin’” (sung by Gordon MacRae in the movie adaptation) onward. When Oklahoma! premiered on Broadway, in 1943, our country was immersed in the terrifying campaigns of World War II, and the musical’s high notes of ebullient optimism struck a welcome chord with many. The show was further seen as a landmark achievement in theater for its time—a fully formed “book musical,” seamlessly integrating song and dance with a dramatic story that ranged across the emotional register.

Times have changed since then, and so has the state of the art. The Oklahoma! that’s stopping here on its cross-country tour has been re-tuned to today’s chords. When we look back upon the era chronicled in the show—the final conquest of the American West, around the turn of the last century—many of us see it in a somewhat different light than most people once did. And, we expect to see ongoing experimentation and progress in the theatrical arts.

Daniel Fish’s Oklahoma! has numerous features that might’ve bewildered audiences of the past. The pit orchestra is replaced by a bluegrass band onstage. Lighting is used for emphatic mood shifts, as some scenes are brightly illuminated with even the house lights turned on, while others are staged in utter darkness. The casting is diverse, both ethnically and gender-wise. In the touring production, Ado Annie is played by the trans performer and activist Sis.

Woke-lahoma indeed, traditionalists may well say. But hold the cynicism, please. Contrary to some reports, the show is not a gloom-and-doom layer cake frosted with virtue signaling. A lot of the original’s high-stepping and lovable hijinks are gloriously preserved. 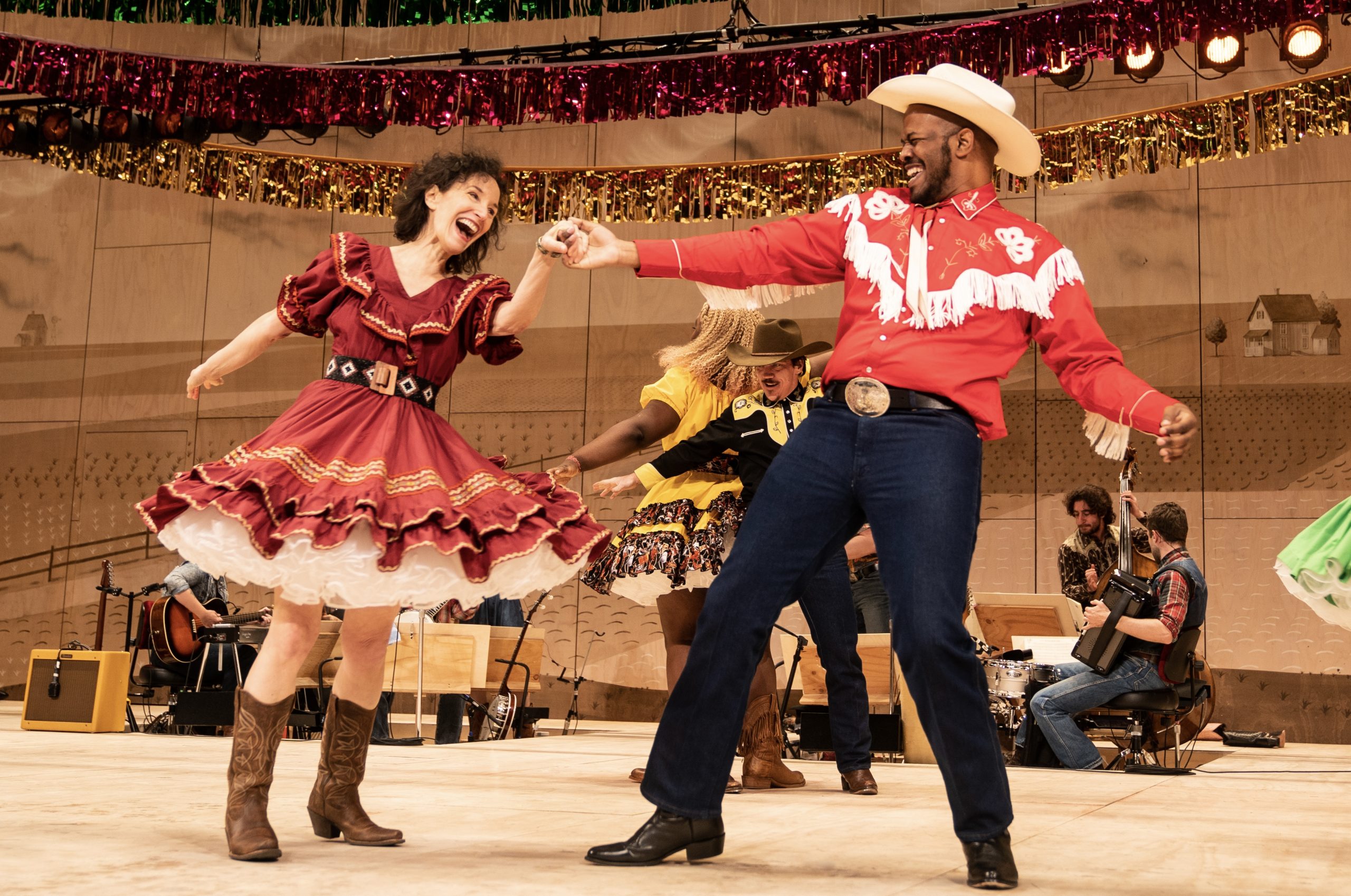 More to the point: The new Oklahoma! moves people, which is what the original did. Credit must go to Richard Rodgers and Oscar Hammerstein for creating a musical that can be played in a new style, in a new millennium, and yet continues to pack a punch. This is the type of quality that keeps Shakespeare alive. In recent years here in Pittsburgh, audiences have seen The Winter’s Tale done as a baroque comic opera (by Quantum Theatre) and Julius Caesar performed by an all-female cast (Shakespeare in the Parks). Both productions were tremendous. And would The Bard have turned over in his grave? Probably only to get a better view.

Act quickly, before the prime seats are gone, if you want a good view of the new Oklahoma! It runs through January 9 as part of the PNC Broadway in Pittsburgh series. At Benedum Center, 237 7th St., Cultural District.