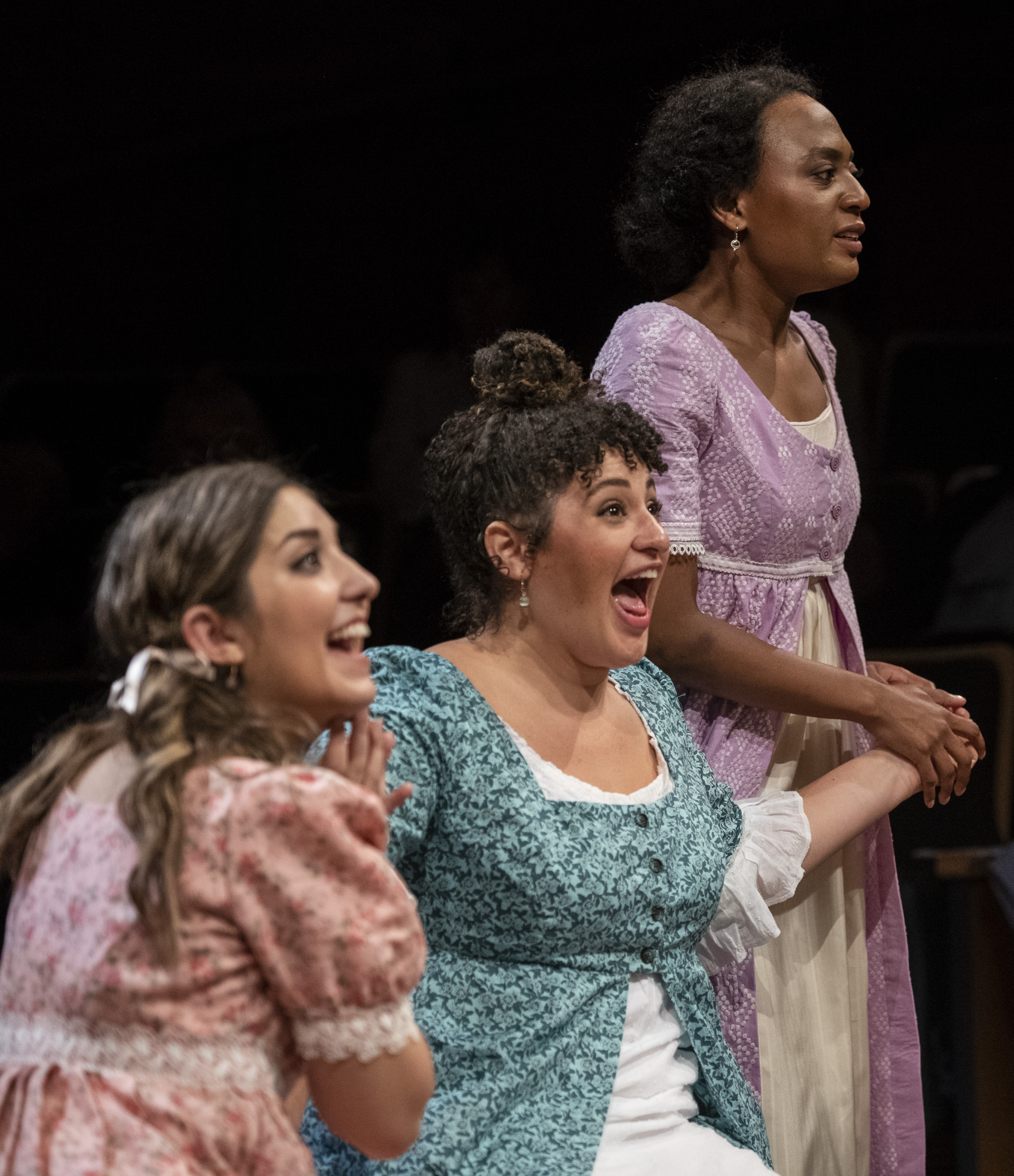 I haven’t read Jane Austen’s Pride and Prejudice (which is shocking, I know), so this theater review will not compare the play at Pittsburgh Public Theater to the novel. Except for the following. A friend who is an Austen fan, to the point where she re-reads Pride and Prejudice every couple of years, told me the play is quite different from the book in its tone and style, but she enjoyed the play nonetheless.

A stage show or movie adapted from a book does not have to be “faithful” to the original in order to be good. It is a separate work of art in a different medium, or in plainer language: It is what it is.

People can love Les Miz despite the fact that it’s only a bare-bones version of Victor Hugo’s epic, with lots of great stuff left out. Nor does it matter that Roald Dahl, the brilliant author of the original, hated Willy Wonka and the Chocolate Factory. He simply failed to appreciate a wonderful movie for what it is, and too late now because he’s dead.

Whereas the new stage adaptation of Pride and Prejudice is very much alive. American playwright Kate Hamill scripted it and The Public does a bang-up job with it. The style is “Toto, I’ve a feeling we’re not in English Lit class any more.”

Into the Past and Over the Top

The setting is class-conscious England in the early 1800s. We meet a family, the Bennets, who are minor gentry—classier than the muddled masses, but teetering on the edge of bona fide respectability and solvency. They have a brood of eligible daughters. Mrs. Bennet is entirely too anxious to marry off at least one to a rich upper-cruster, while Father is too stoically the man of the house to get sucked into his wife’s worries. “I have high respect for your nerves,” he reassures her. “They are my old friends.”

You can guess what’s coming. The Bennet girls will meet a parade of male prospects, who range from really big fish to dubious catfish. All will try to fulfill their hearts’ desires while maneuvering around fussy social conventions and stuffy prejudices (“He is only a lieutenant”), until true love wins  out, or, in some cases, doesn’t.

What’s remarkable is the wacky manner in which this dance is performed. It seems unlikely Jane Austen wrote her novel with commedia dell’arte in mind—the raucous form of comic theater that gave us the word “zany,” from the Italian zanni—but zany, zanni, and hold-onto-your-hatski is what you get here.

Elena Alexandratos, as worried Mrs. Bennet, wails and chews the scenery with the splendid gusto of an aggrieved diva. The daughter who’s so awkward she will never catch a husband—homely, bookish Mary—is played by Andrew William Smith, an actor tall enough to shamble down the basketball court and miss a dunk shot. 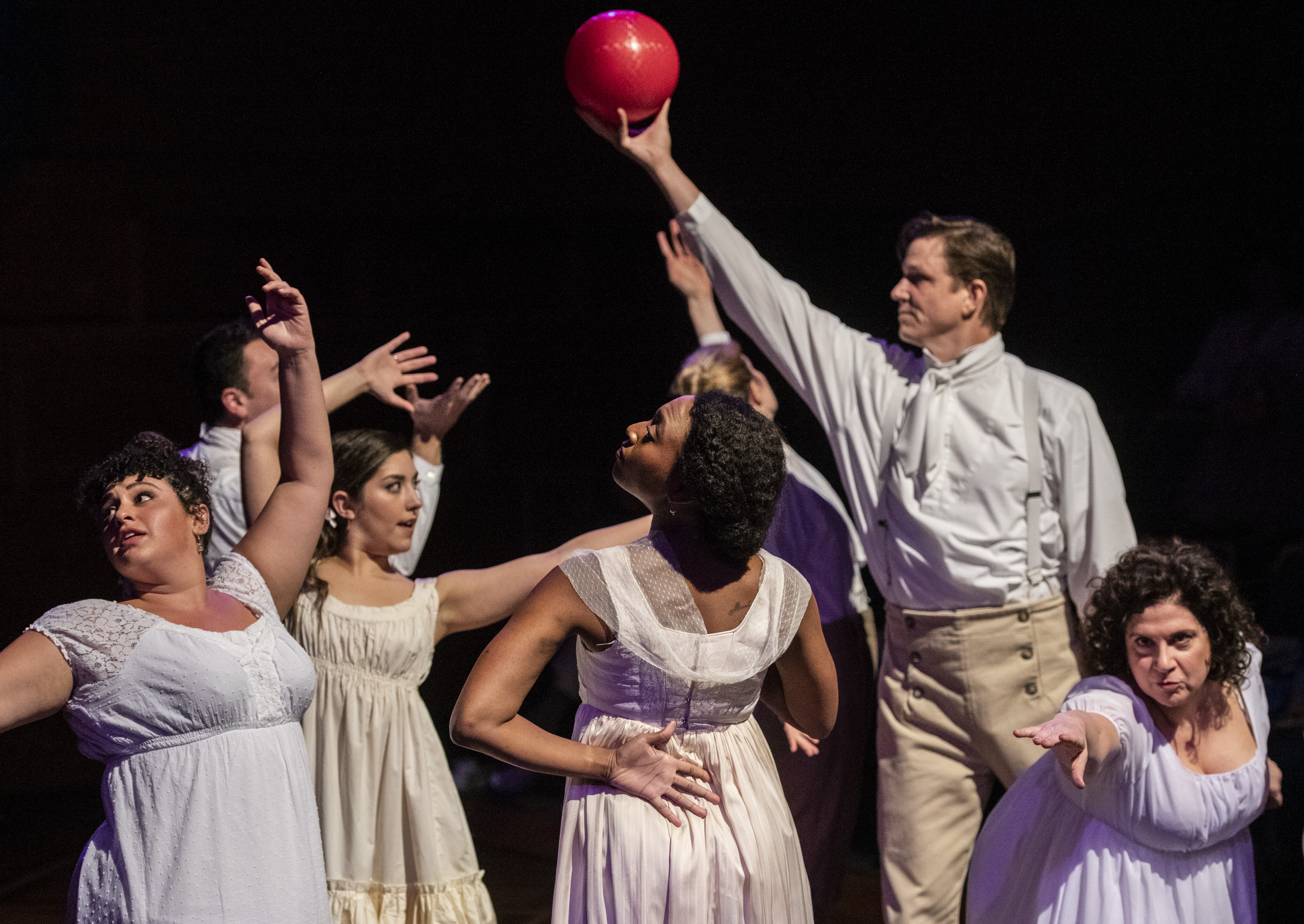 The Bennets frolic in their undies while daughter Mary (Andrew William Smith) proudly holds the red ball high, but when Mary dons a fine dress and veil to step into society, she will not do so well.

Several actors play multiple roles. Emma Mercier is a bouncy, bubbly cheerleader type as the youngest daughter, Lydia, then re-appears casting scornful sneers as the haughty Lady Catherine. And zaniest of the bunch is one of the prospects: a black-clad Church of England clergyman, Mr. Collins (Chris Richards).

Collins is incredibly—and I do not use the word in its cheap cliché sense; I mean incredibly—bizarre. He grimaces and scuttles around like Groucho, but more crazed. He preaches and moralizes in a brassy, grating voice comparable to a car burglar alarm. His obvious lust for women would be loathsome if it wasn’t punctuated by the goofy lines he lets fly: “You are uniformly scrumptious!” And, on being invited to dance with his choice of the Bennet girls, “It is my intention to couple with all of them.”

There is so much over-the-topness that you think it’s going to wear thin. Instead, it builds momentum. Sportswriter Mike Tanier once explained why heavy metal has to be played extremely loud: “Turn it down and you lose the lack of nuance.” The Public’s production keeps it turned up. 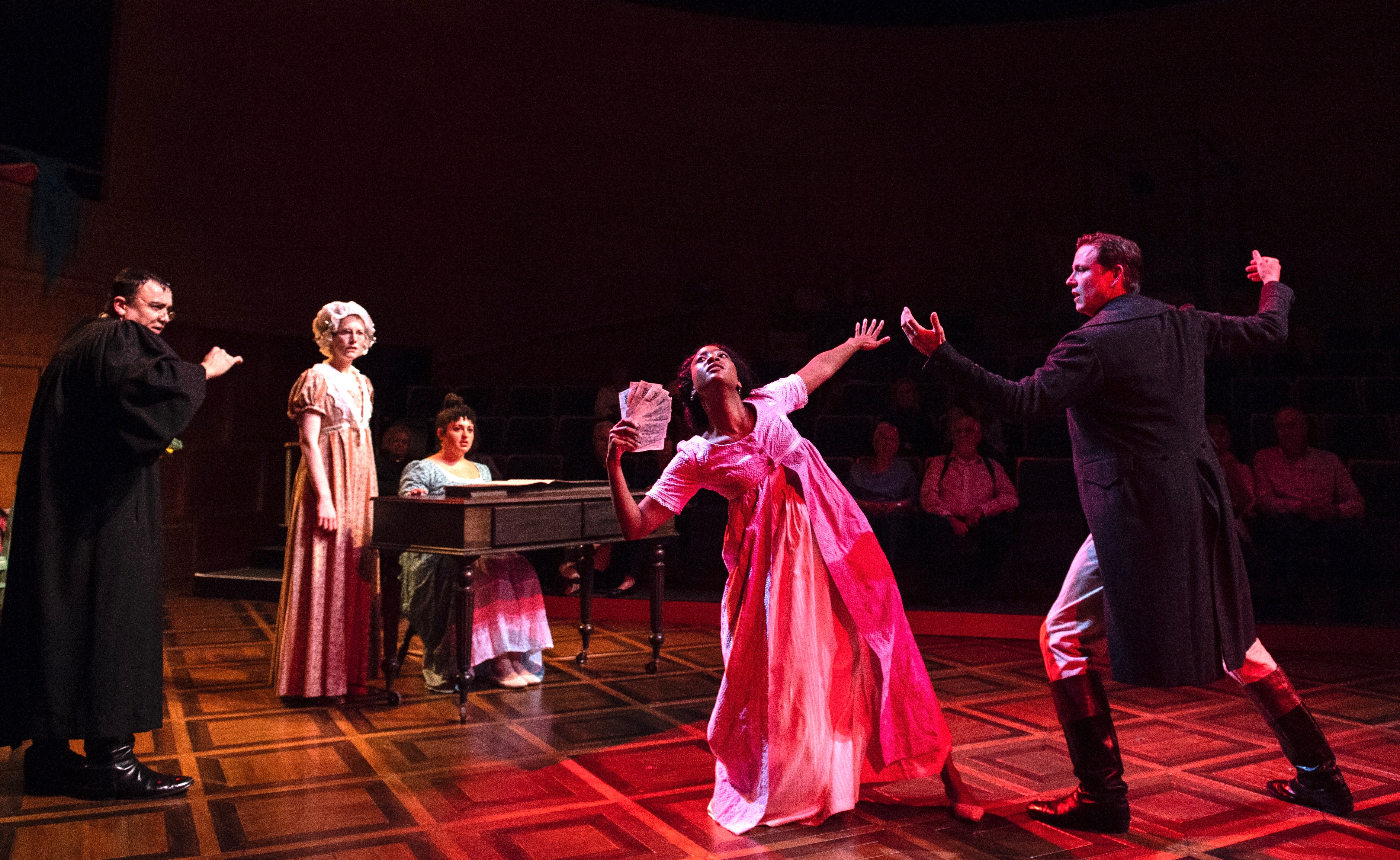 How the Whole Thing Works

This play may not be everyone’s cup of Earl Grey spiked with laughing gas. At intermission I spoke with a woman whose look said We are not amused. She said she prefers a wittier sort of humor. Maybe more nuanced.

The shtick in Pride and Prejudice isn’t really slapstick, though. I can’t recall a single pratfall—you’ll have to rely on YouTube fail videos for those—and the chuckles do include a good bit of the dry old Brit wit. (Two women: “He’s the perfect man.” “Drink your tea and tell me how such a paradox is possible.”)

What’s going on in the play is caricature. It’s caricature done well, and it grabbed me because it’s deeply funny to see one’s own foibles and those of others turned up to the max. Clumsy Mary’s bumbling attempts to act cool while dressed in finery that doesn’t suit her; the way Mrs. Bennet “catastrophizes” every little setback; crazy Collins wrapped up in the trap of his own passions—yep, yep, I’ve  been there and done those things. Just not as artfully.

Also, the whole spectacle comes across as a super-metaphor. If you think of the nutty characters as representing your emotions, and you watch them clashing with the straitjacket stiffness of the rules and decorum they’re supposed to observe (as embodied in people like Lady Catherine), it evokes a feeling known, I think, to many of us: the feeling of just wanting to be your natural, demonstrative, and sometimes silly self in a setting where everybody’s trying to put on the big chill.

Surely there are scholarly papers that delve into the tensions between the individual and society in Jane Austen’s Pride and Prejudice. But I suggest seeing how the issue is examined at The Public, where it’s tons of fun. 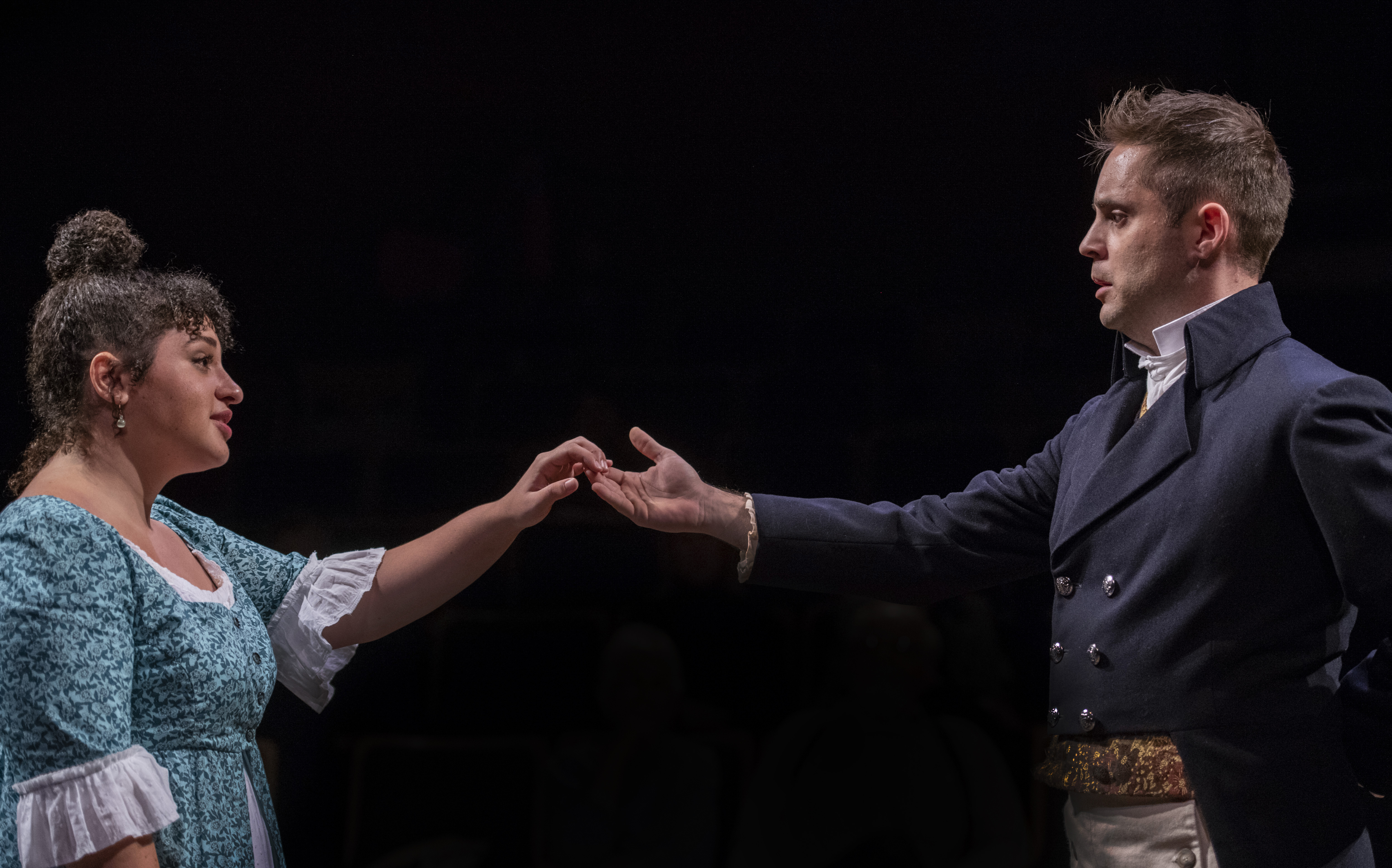 Fiercely independent Lizzy and oh-so-proper Mr. Darcy (Ryan Garbayo) detested each other at first sight, so naturally it leads to this.

Pride and Prejudice, Kate Hamill’s riff on Austen’s novel, is directed for Pittsburgh Public Theater by Desdemona Chiang. When actors are superb, the director probably had something to do with it, so credit to Ms. Chiang. In addition to Emma Mercier as Lydia and Lady Catherine, actors playing multiple roles are: Ashton Heyl (as Charlotte Lucas and Mr. Bennet), Ashley Bufkin (Jane Bennet and Lady Catherine’s daughter), Andrew William Smith (Mary Bennet and Mr. Bingley), and, in a triple play, Chris Richards (Miss Bingley, Mr. Collins, the lieutenant Mr. Wickham).

Choreography by Erika Chong Shuch, costuming by Christine Tschirgi, and fine work by the rest of team as well. Through Oct. 28 at the O’Reilly Theater, 621 Penn Ave., Cultural District. For showtimes and tickets visit The Public on the web or call 412-316-1600.