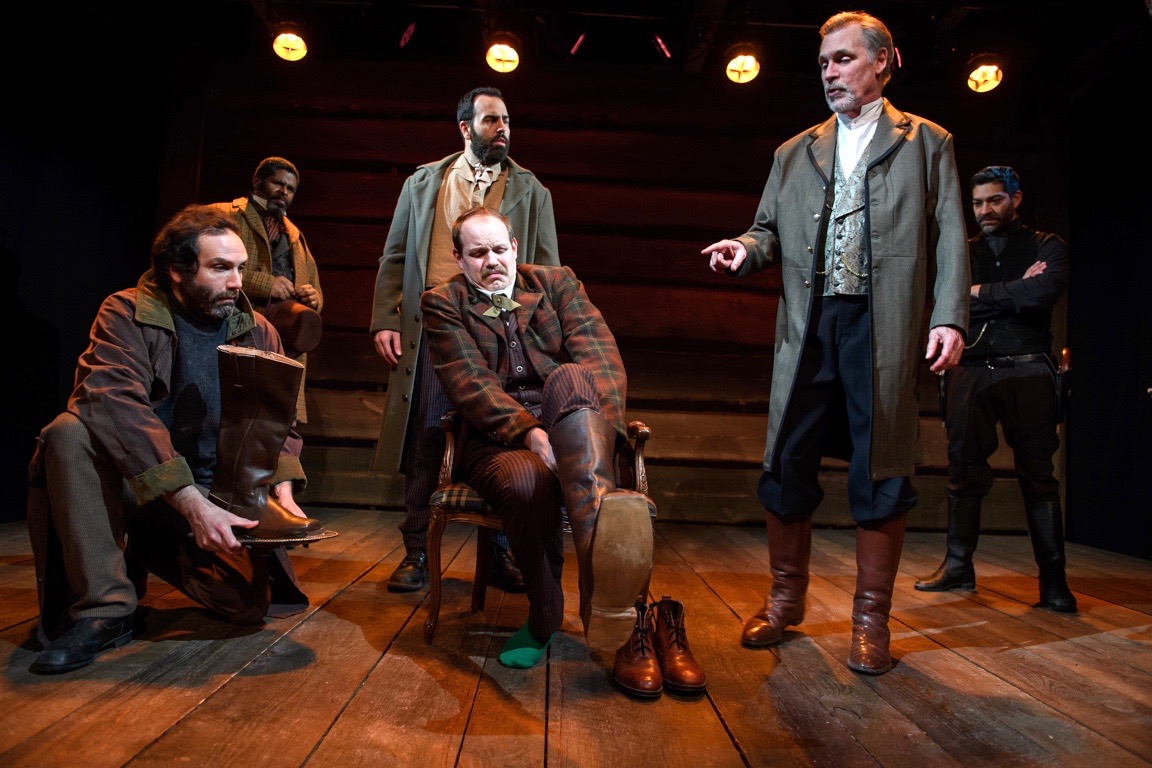 If the boot fits, fear it! Villainous Walter Brown (Cotter Smith, standing, front) explains to poor Wings (Connor McCanlus, center) why the tea stains on a pair of tea-colored boots are grounds for a duel to the death.

Rules of Seconds, the current play at barebones productions, has a casualty rate of 64%. Seven of the 11 male characters are killed or grotesquely wounded. This calculation does not count the two female characters, since technically they are non-combatants. The women escape physical injury but suffer heartbreak and get spattered by stage blood.

Altogether, the play takes quite a toll. Good thing it’s a comedy.

We live at a time when our aesthetics favor weirdness, and Rules of Seconds (through February 17) is very weird. It’s the latest from L.A.-based playwright John Pollono, who seems to have been channeling David Lynch and Quentin Tarantino simultaneously. Weirder yet, the story that he’s channeled them into is a period piece, a satire of dueling culture in the 1800s.

Gentlemen of that era often defended their honor by squaring off with weapons, usually pistols. Famous fatalities included Alexander Hamilton (killed in 1804), U.S. Navy Commodore Stephen Decatur (1820), and the great Russian writer Alexander Pushkin (R.I.P. 1837). Duels could be fought over serious threats to a man’s standing—Decatur had questioned a fellow officer’s fitness for duty—but they could also be triggered by petty insults. Sometimes, as we say in Pittsburgh, one guy just jagged the other a little too much.

By no means were all duels deadly. In many cases, when both parties showed up with their seconds and surgeons, they realized that things had gotten out of hand. They would then settle at the last minute, as Abraham Lincoln and a rival once did, or they’d purposely shoot to miss.

That sort of backing down doesn’t happen in Rules of Seconds. The men adhere to rules spelled out by an actual old document called the Code Duello, which, in finicky language, dismisses life-saving common sense as chicken shit. Thus the action unfolds on waves of blood laced with absurdity.

Winging It Through the Weirdness

Rules of Seconds is set in pre-Civil-War Boston, where we meet a young man who seems the worst possible candidate for a duel. Nathaniel Leeds (played by Connor McCanlus) is a fidgety, self-effacing mama’s boy nicknamed “Wings”—think flight, not fight.

Wings is germophobic. After he signs a business paper on his mother’s behalf, the other man offers the customary handshake. Wings recoils in horror. Worse, he spills tea on the man’s fine calfskin boots, and the man is the notorious duelist Walter Brown (Cotter Smith), who challenges Wings.

It looks like certain death. But help is on the way, along with bizarre plot twists that can’t be revealed, lest the playwright challenge me for giving spoilers. So let us sample the weirdness.

The play’s first duel is not Brown vs. Wings. It takes place between men who choose different weapons: one a pistol, and one a mug of beer that he’s sipping while the faceoff starts. You can guess who wins but I dare you to guess how.

The dialogue has vintage Lynch-ian touches throughout. When Wings’s mother (Robin Walsh) serves dinner, Wings eyes the stew warily. “Don’t worry,” Mama says. “There’s nothing green or square in it.”

We learn that years ago, Brown was enamored of Mama. He recalls her youthful beauty in rapturous detail: “Your toes were dainty, but spread apart and sinuous.” 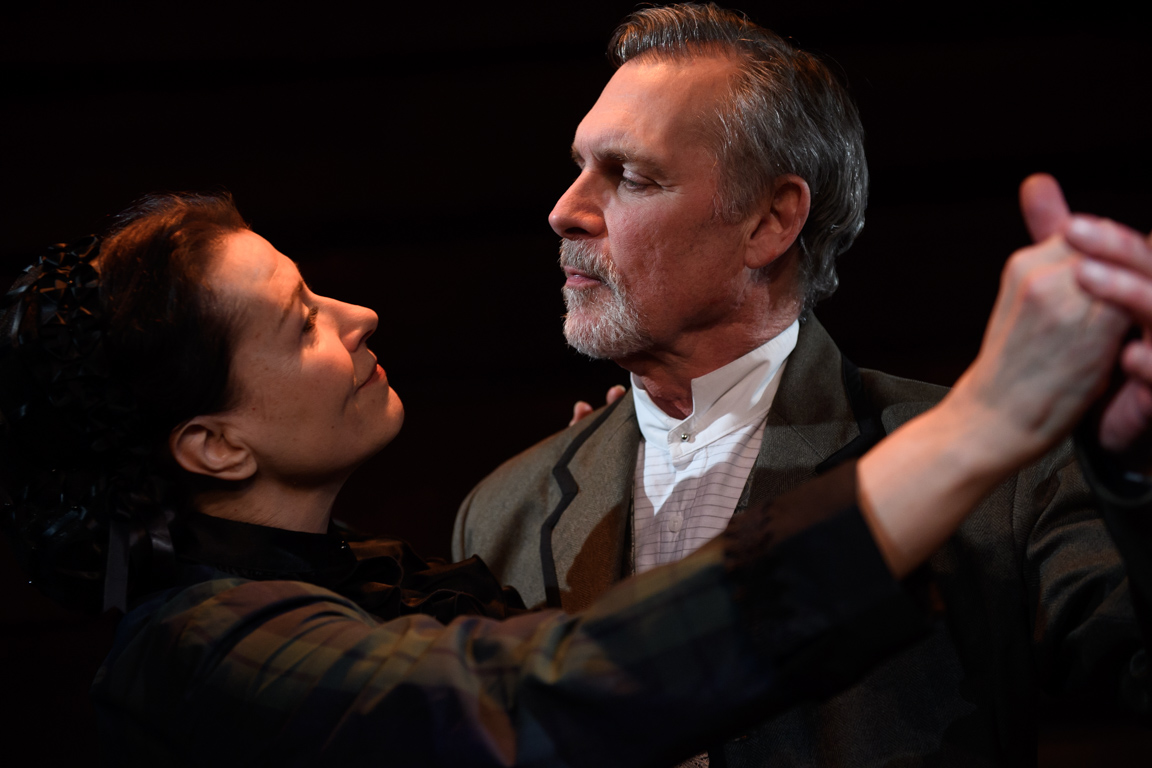 Is it love or does he have a pistol in his pocket? Wings’s mother Martha Leeds (Robin Walsh) hopes that hard-hearted Mr. Brown will go soft.

Wings has a brother, James (Patrick Jordan), who lectures him about the dreadful price of dishonor. If you run from this duel, says James, you will be shunned and despised by all: “Were you to lie in the street with your head aflame, a dog would not piss it out.”

Attacks of absurdity arrive in many forms. The lines quoted here are sniper shots—unexpected bursts of silliness, fired from amid the cover of serious talk—whereas some scenes bring the stuff creeping out into the open. One hilarious example is a “hypothetical” discussion of gay love, in which two manly men speculate on what it must be like. They flirt not with death but with the peril of confirming the hypothesis.

There’s plenty more. You get 1800s-style tall tales that grow zanier as they’re told. You get grisly physical humor at moments of peak carnage. And, you get a play that makes its main target perfectly clear.

But What Does It MEAN?

Rules of Seconds is a multifaceted spoof of the macho mindset. Time and again, ego, disguised as “honor,” prevails over sanity.

Maybe this is a message we don’t need to hear again. Maybe the real events of modern life have already brought it home—both painfully, as in urban gang wars and wacko acts of terror, and ridiculously, as in the tweets emanating from the land’s highest office.

What the play presents is a chance to have the message delivered more artfully. And on that score it succeeds, as long as you don’t expect subtlety. (Subtlety? Hah! O-ver-ra-ted.)

Rules of Seconds does contain nuance, which—a subtle point—is different from subtlety. The characters turn out to be more than cardboard caricatures. Wings becomes more than the prissy sissy we see at the opening, while bad guy Brown blossoms into a classic arch-villain: clever, engagingly witty, and a man capable of deep feelings … but still, you know, bad.

In the course of getting to know the characters, you begin to care about them. Therefore the play gathers steam and punch as the plot thickens. That’s much better than a one-joke play that empties its ammo in the first ten minutes and fires blanks the rest of the way.

The actors make it work. You may have heard that the cast features two actors from the Netflix true-crime series “Mindhunter,” Cotter Smith and Jack Erdie. Both are really good. Smith’s role as Brown allows him to shine, and Erdie wears multiple hats, coldly narrating passages from the Code Duello to introduce each scene, then later stepping into the action to display the splendid cruelty that wins him nasty-boy parts in movies and TV. 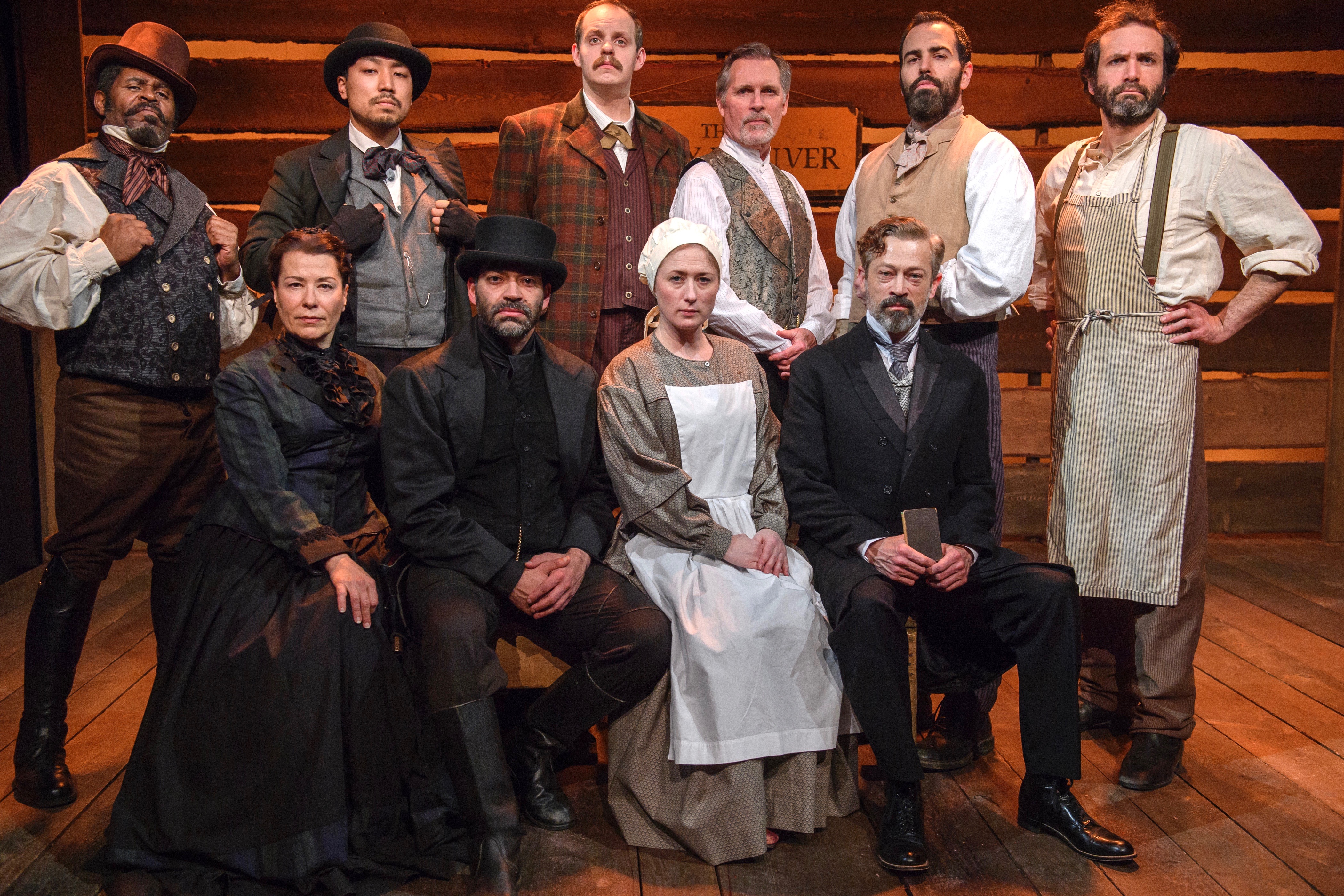 The Mindhunters are far from alone up there. Wali Jamal, Donald Chang, Dave Mansueto, and Mickey Miller score strongly in an assortment of roles.

Meanwhile, the women—Walsh as Mama Leeds, plus Nancy McNulty as Brown’s feisty maidservant—prove to be equally sharp as the men, not to mention saner, and perhaps even tougher. Whooo could have imagined?

Rules of Seconds is directed for barebones productions by Melissa Martin. Patrick Jordan, in addition to playing brother James, is the company’s artistic director. Through February 17 in the barebones black box at 1211 Braddock Ave., Braddock. For showtimes and tickets, visit barebones on the web or call 1-888-71-TICKET.