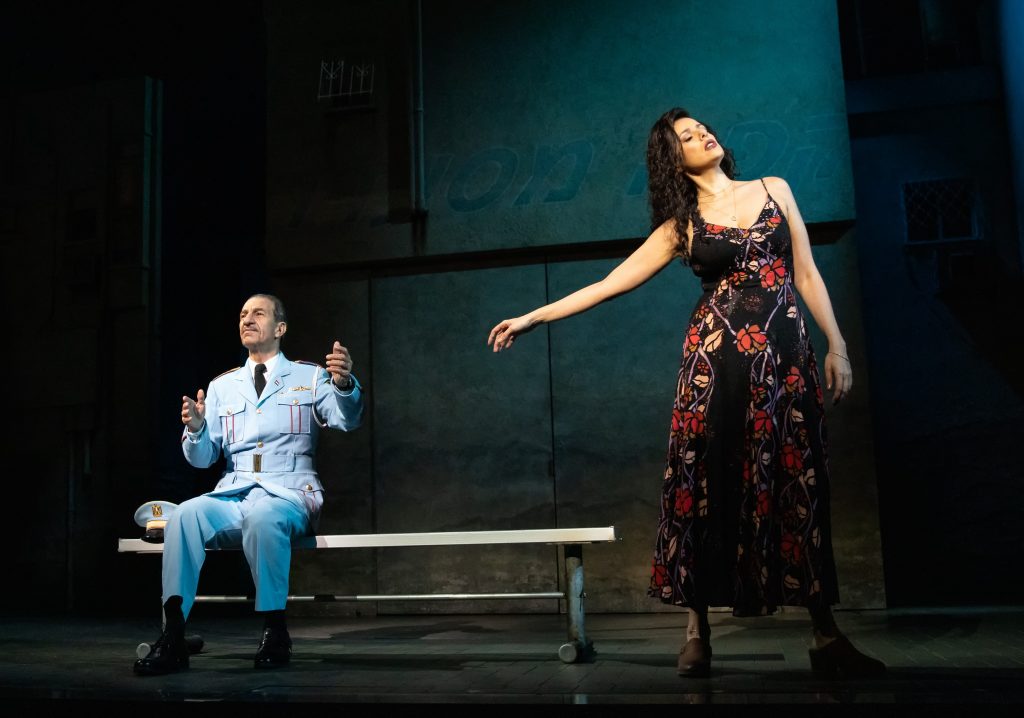 The touring production of ‘The Band’s Visit’ features touching moments between ( r. to l.), Dina (Janet Dacal) and Tewfiq (Sasson Gabay). Gabay starred in the film on which the musical is based. (photo: Photo by Evan Zimmerman, MurphyMade. )

“Once, not long ago a group of musicians came to Israel from Egypt. You probably didn’t hear about it. It wasn’t very important.” That’s the understated text projected onto a wall of the set at the beginning and end of The Band’s Visit. It’s probably true that big-picture-wise not much happens in this fictional story, but many important things do happen on a smaller scale.

The musical, touring at Benedum Center through March 15, is based on the 2007 dramatic comedy film of the same title. It imagines a 1996 trip by the Alexandria Ceremonial Police Orchestra to Israel to perform at an Arab Cultural Center in the city of Petah Tikva. However when the band members arrive in Tel Aviv from Egypt, no one from the Cultural Center is there to pick them up. So they go to the bus station and band leader Tewfiq (Sasson Gabay) instructs a young, smooth-talking member of the band, Haled (Joe Joseph), to speak with the woman at the ticket booth for tickets to their destination. Haled loves to tell women that he is a musician, and also to inquire if they enjoy the music of American trumpeter of the 1950s Chet Baker. This provides some comedic moments, especially when he asks two female Israeli soldiers.

Haled gives the ticket booth woman the same spiel and then asks for tickets to Petah Tikva. However, she misunderstands where he wants to go due to his Egyptian accent. So everyone in the band gets a ticket to the remote and tiny Negev desert town of Bet Hatikva.

Before the bus pulls into Bet Hatikva, we see the residents dancing on and around the set’s center-stage turntable (operated at a regular speed as opposed to the super speed of Hamilton‘s turntable), singing about their boredom in the number “Waiting.”

The Band Arrives in Nowheresville 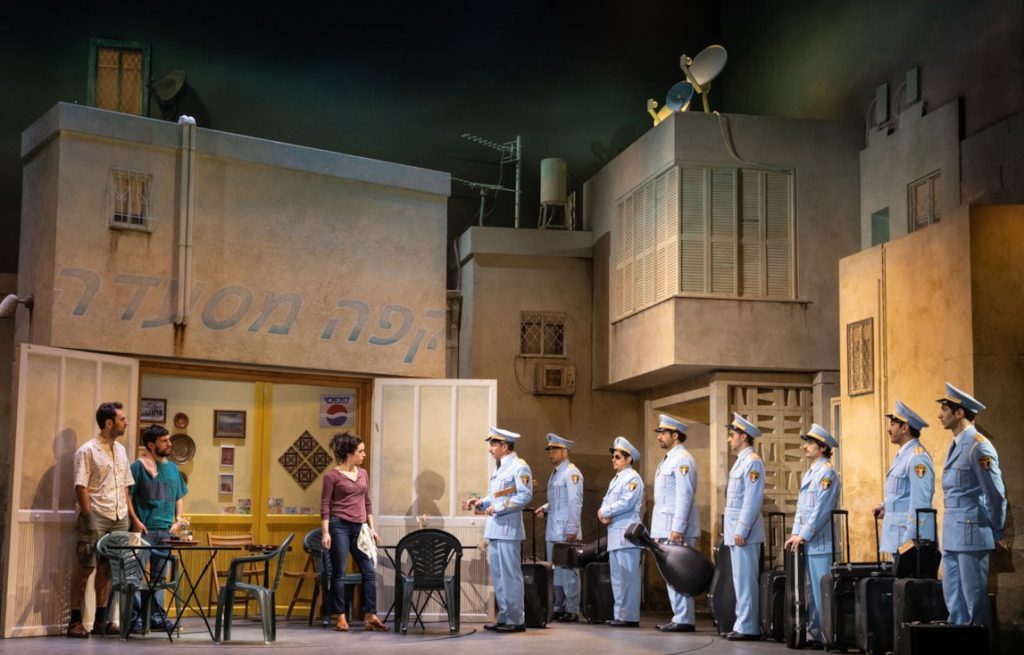 An unplanned cultural exchange is about to occur in the small Negev desert town of Bet Hatikva. (photo: Matthew Murphy)

The bus arrives and the policemen see a café where they ask the workers Papi (Adam Gabay) and Itzik (Clay Singer) how to get to the Arab Cultural Center. Perplexed they call for the boisterous café owner, Dina (Janet Dacal). Dina’s not too receptive at first to the Egyptian band that has landed on her doorstep. As she discovers they have accidentally come to the wrong place, she, Itzik, and Papi sing “Welcome to Nowhere” which contains fun lyrics about the distinctions between the names of Bet Hatikva and Petah Tikva.

Dina has many funny retorts to events unfolding around her. When the band asks if they can purchase something to eat, she looks at her empty restaurant and says “We can fit you in.” She also has a heart, and after informing the band that the next bus is in the morning and there’s no hotel, she says the band members can stay overnight at her and her workers’ homes. Another funny line from Dina is when Tewfiq asks if her husband will mind if he and Haled stay with them. She replies that she’ll ask him next time she sees him, that he left her several years ago.

This is where the play starts to explore cross-cultural humanity and how sometimes we are accidentally thrust into one another’s lives and how it can have a positive impact. David Yazbek, who wrote the music and lyrics for the musical, said it best in an interview on the official website: “It’s about the underlying ocean that connects everybody and everything. To me the most potent metaphor for that is music. What does it sound like when borders dissolve and when everyone is singing together for the first time?” Yazbek is certainly correct about the power of music to bridge cultures. Look no further than the beginning of more societal integration of African Americans and whites through the power of popular music in the 1950s and ’60s.

When the band is broken up to stay in homes with various people, we see the positive influence that both the Israelis and Egyptians can have on each other. They are either helping one another find solutions or being a catalyst to help them find their own. One of the plot lines is Tewfiq and Haled staying with Dina. Tewfiq is much more reserved than Dina, who is an open book of emotions writ large. At one point she tells him, “A man should not hide behind his hat.”

This starts a process of discovery in both of their lives. They go out to get something to eat and she gradually gets him to open up about his life and a few tragedies. She relays some of her own. They bond over their common love of Omar Sharif movies, which Dina was able to watch on an Egyptian TV channel she could get reception for. This leads to the song “Omar Sharif.” Is a possible romance starting to bloom in the desert? The musical numbers “Itgara’a” and “Something Different” add to the mood. 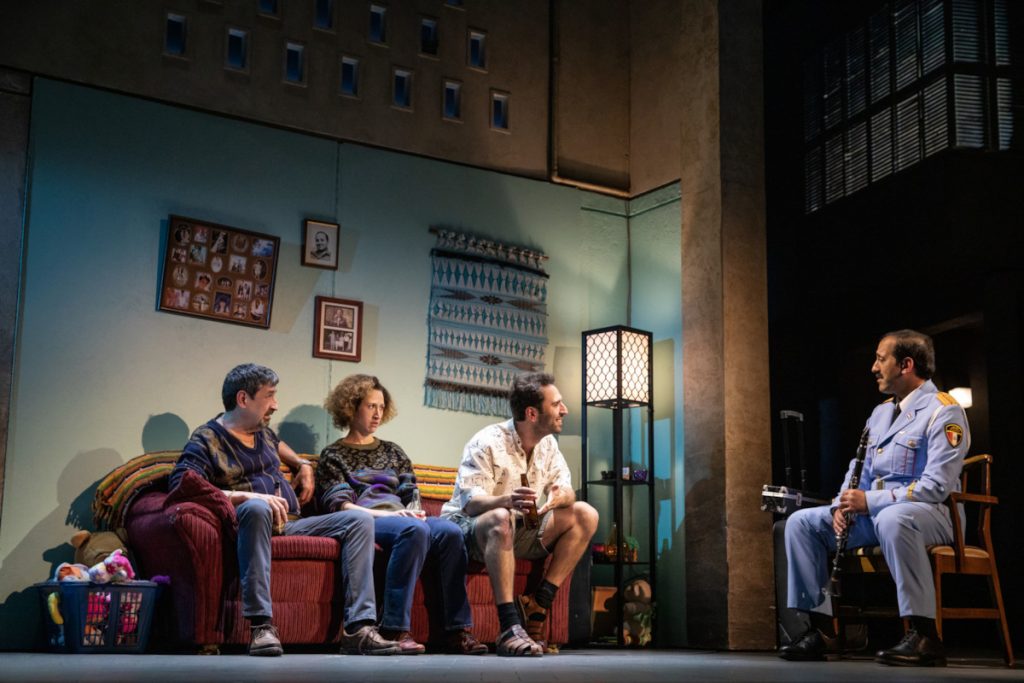 Other touching scenes are “Itzik’s Lullaby,” where Itzik sings to his infant, and a subsequent scene when Simon (James Rana) plays his clarinet to calm the baby’s crying from disruptions in the household. On the fun side is Haled helping a clumsy, love-struck Papi talk to his crush in the song “Haled’s Song About Love.” Another fun love-struck character in The Band’s Visit is Telephone Guy (Mike Cefalo, a Pittsburgh native), who stands by the only public phone in the town where he patiently and optimistically awaits a call from his girlfriend.

The play is about humanity, but is also about great singing, especially by Dacal, acting, and music. The band is very talented and is complemented by the score from the pit band. Does the Alexandria Ceremonial Police Orchestra make it to their scheduled concert in Petah Tikva? That would be what you call a spoiler, so maybe just come and see the show. It’s a very good one.

On Broadway, The Band’s Visit won an amazing 10 Tony Awards in 2018, including the Big Six: Best Musical, Book, Score, Direction, and Leading Actor and Actress. The show’s book is by Itamar Moses. The Band’s Visit is also a great example of the recent wave of offbeat, smaller musicals, which differ from traditional Broadway hits in several ways. The musical doesn’t have many large spectacle numbers that fill the stage and it is set in a foreign land.

Both leads, Dacal and Gabay, perform magnificently as does the rest of the cast. Gabay is an Israeli actor who was also in the original film as Tewfiq. Dacal is a veteran actor who has starred on  Broadway in Hal Prince’s Prince of Broadway and played Nina Rosario in the Tony Award-winning musical In the Heights.