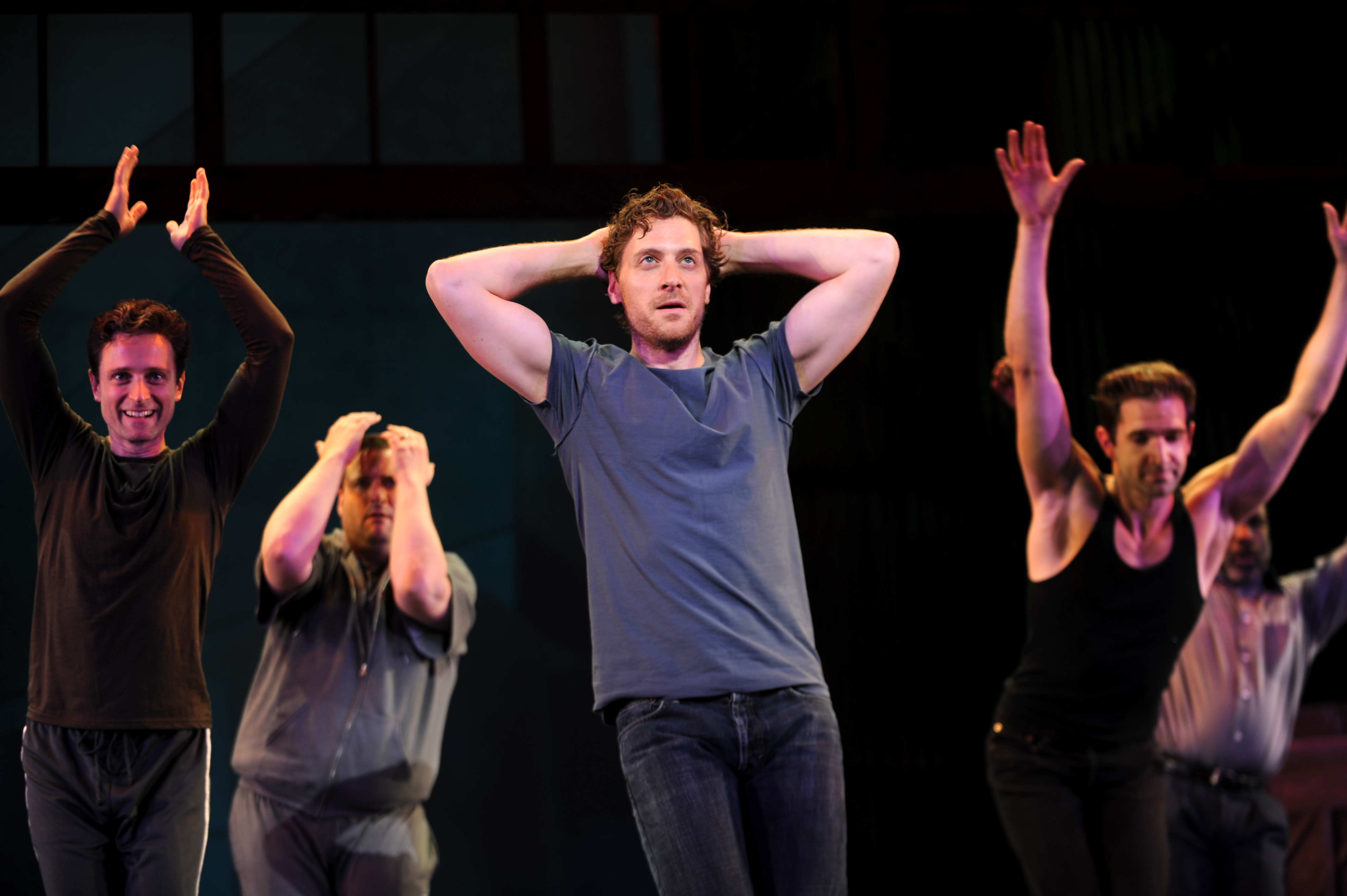 Biceps, check—but what does he have under those blue jeans? We’re gonna find out when Jerry (Andy Kelso, center) and his mates put on a show wherein they take it off.

To state the obvious: It’s the musical numbers that make musicals what they are. Music has the magical ability to multiply the power of any emotion.

Soulful songs like “I Dreamed a Dream” are what make Les Miz so moving for so many. The sacrilegious satire in The Book of Mormon scores because it’s rolled out in rollicking tunes, and most musicals include at least a couple of high-exuberance song-and-dance pieces—the ones that bring down the house with the whole ensemble romping and rocking, until they finish with their hands flung high and wide. Hold that pose! If only life could be like that!

But along with the music, a musical also needs a good story. And The Full Monty— at Pittsburgh CLO, through July 15—has a story that turns a socioeconomic issue into seriocomedy. It is the world’s only musical about unemployed steelworkers getting naked.

The guys in The Full Monty have been hurting since the mill shut down. Being ejected from their jobs makes them feel like “Scrap” (an early song). No longer so cocky, they are reduced to fiddling aimlessly while the town’s sassy, brassy women enjoy a ladies’ night out. (The CLO women in these roles take the stage by storm.)

Plus, of course, the guys are hurting for cash, so a bunch of them set out to make big money fast. They will put on a male striptease show, just like the Chippendale dancers the girls swoon over. Except, in order to draw a crowd, they’ll have to outstrip the Chips. Even the men’s thongs shall be removed. 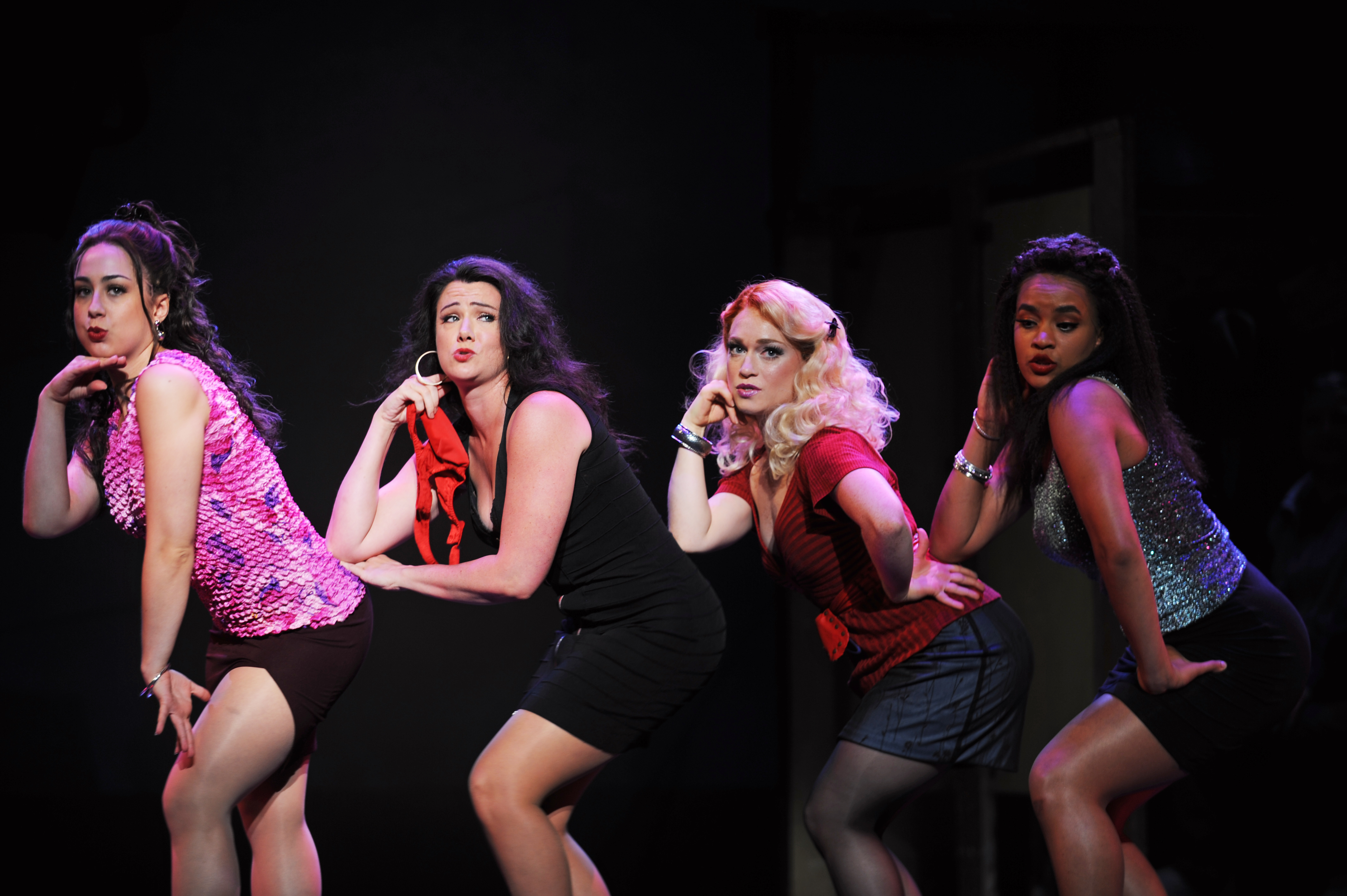 Not to be messed with: these are the Buffalo gals and they’re coming out tonight. (L to R: Jessica Ice, Natalie Charle Ellis, Katie Anderson, Cameron Anika Hill.)

Shufflin’ off to Buffalo

“The full monty” is a British slang term meaning “all of it.” In this context it refers to what a stripper displays at the, ahem, climax of the act, and it is used here because the musical is adapted from a 1997 British movie of that title.

The original Full Monty was filmed in Sheffield, England, a steelmaking center where the industry had gotten crushingly downsized, as ours was. Made on a slim budget, the movie had bump-and-grind rock songs in the soundtrack but it was not a musical. The movie did, however, become a surprise smash hit.

By mixing snappy, scrappy blue-collar comedy with deeper themes—such as the grimness of the situation, and the fears and feelings the men face when they realize that stripping in public will mean exposing themselves in every sense—the film had audiences rooting for the underclass underdogs while laughing at their absurd venture into show biz.

And that’s a formula for a musical as surely as the Pope is Argentine. Broadway gave The Full Monty the full Broadway treatment. Award-winning American writer Terrence McNally kept most of the movie’s plot but moved the setting to Buffalo, New York. Composer David Yazbek added show tunes galore.

A crowd-pleaser from the day it premiered in New York in 2000, The Full Monty gets a strong production from Pittsburgh CLO. During the scenes that show the guys trying out their dance moves, the men in the cast elicit big laughs with a smorgasbord of clumsy attempts to make working-stiff bodies flow in smooth, sexy syncopation. It’s not easy to do a good job of dancing badly. These actors do it. (One exception is Randy Donaldson, playing an ex-steelworker nicknamed “Horse” who actually knows how to shake and shimmy. Donaldson nails his big solo scene with a fluid aplomb that’s equally a hoot.) 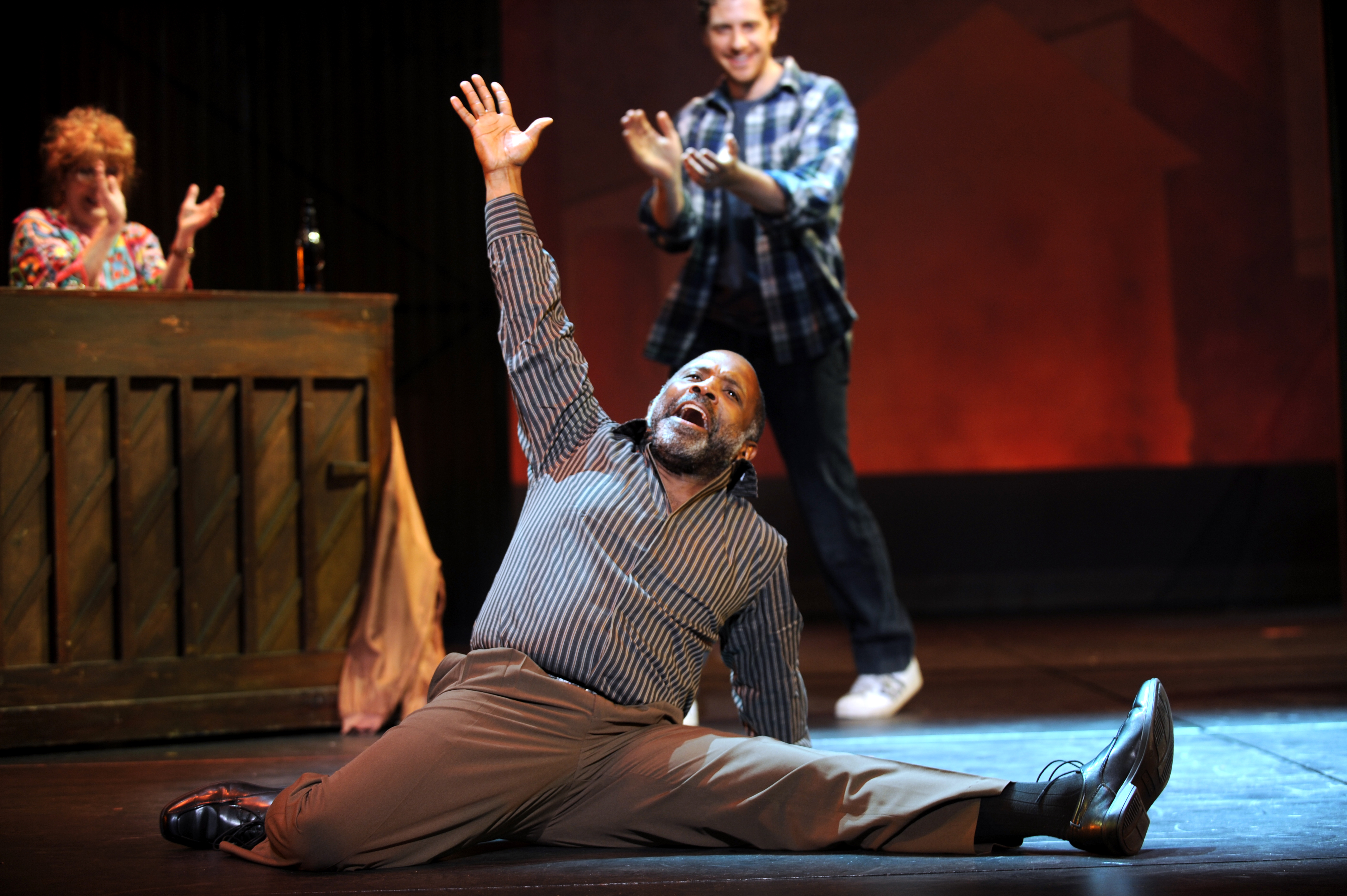 The man called ‘Horse’ (Randy Donaldson, front) can bust a move with the best. The only question is how horse-like he’ll look in the absence of costume.

Snappy lines in the script come off nicely, too. When a woman tells one of the guys “You’re sexy—in a non-threatening way,” it ought to be taken as a compliment, but in the macho milieu of this musical, everyone knows right away that it ain’t.

Perhaps the best way to sum up The Full Monty is to say it’s a feel-good show. Despite the sad scenes and bitter ironies, and despite there being more body-part jokes than you can shake a penis at, many audience members I chatted with found it ultimately and rather weirdly uplifting.

On opening night, when I went, I saw multitudes of people (especially the women) exiting the theater with smiles on their faces afterward. To me that’s a better sign of satisfaction than the standing ovation the show received at the end, for as you may know, we live in an age of standing-ovation inflation, when just about anything gets a standing O.

There’s another shoe to be dropped. Let me drop it now.

I have seen the movie, which most Americans today haven’t. I liked it a lot, and intentionally did not re-watch it before going to the musical, in order to keep the memories vague. The stage show is a separate creation. It should be experienced and judged as it stands.

And my judgment is: I’m not sure this particular story does best as a musical. For one thing, whereas the movie version of The Full Monty delivers the goods in a nice, tight hour and a half, the musical runs long. Two hours and 40 minutes including intermission isn’t overly long by Broadway standards, but this one feels long. 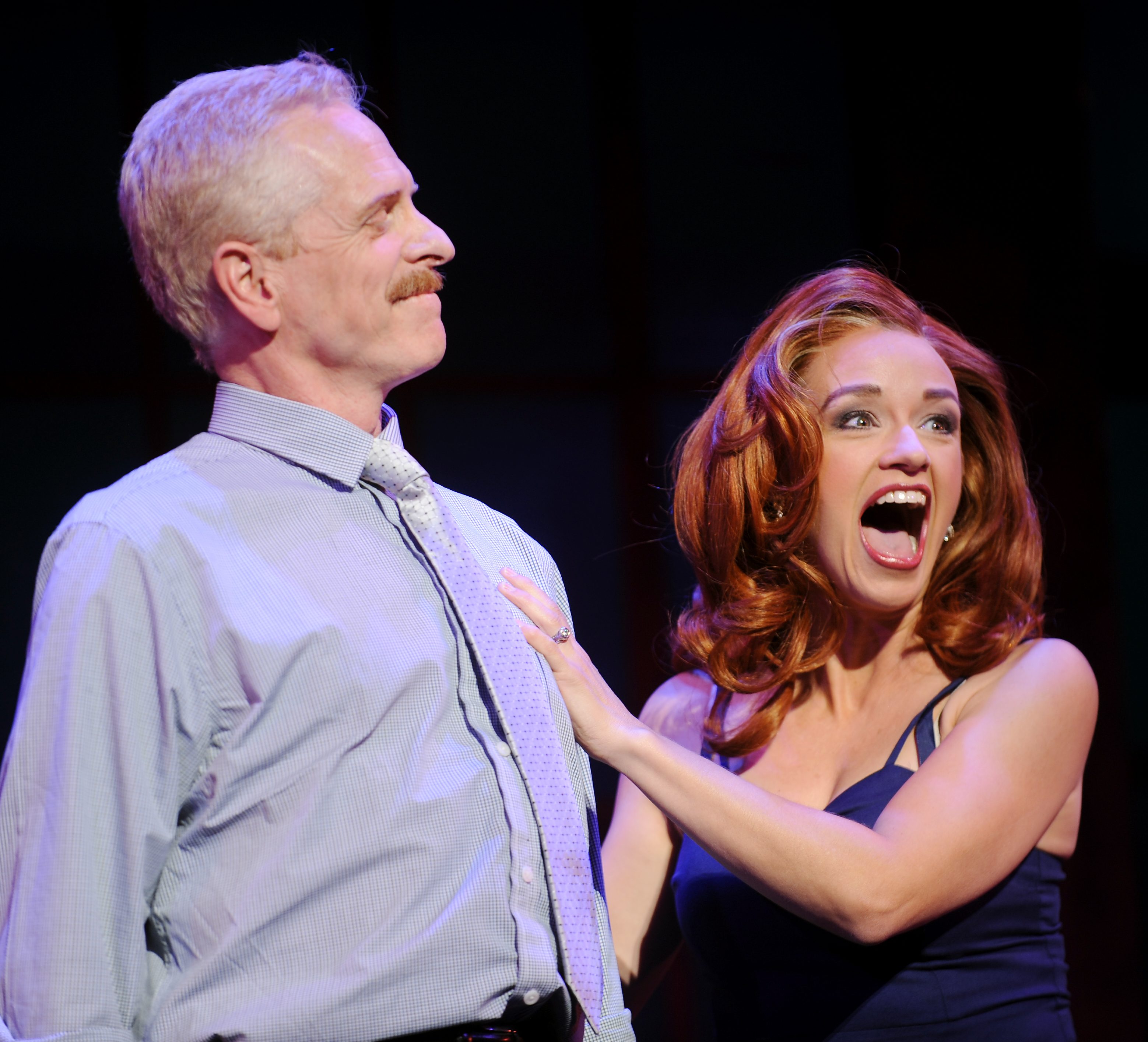 Even the ex-boss-man from the mill (John Hickok) intends to boogie with the boys. His vivacious wife (Sarah Uriarte Berry) can hardly believe it.

Nearly all of the story is a build-up to the grand finale in which the men finally take the stage to show what they’re made of. One doesn’t mind the build-up a bit if it keeps moving swiftly and new stuff keeps happening. Alas, however, the introduction of musical numbers often delays the process—or at least, that’s how it felt to me. There were times when I wanted a good song to be over, just so we could get on with it, mates.

For another thing, the movie had an intimate feel that gets lost on a big, airy stage in a large house like the Benedum. Although many musicals come across great in such a venue, I’d say The Full Monty, not so much.

On the positive side of the ledger, the Americanization of The Full Monty doesn’t do much damage, if any, to the tale. If you’ve seen an unfortunate Americanization—an example would be the movie Cousins, which wiped out every trace of delightful French quirkiness in its remake of Cousin, Cousine—you know what I’m talking about. Maybe the British are more like us than we know!

And last but not least, let’s hear it again for the production CLO gives to The Full Monty. Here in Pittsburgh, where too many of us have confronted the fates of the characters in the musical, it’d be easy to say you ought to see it for that reason. But the real-life issues need to be dealt with in real life, not by going to the theater.

This is a show. CLO does it right. Just might send you home with a smile.

The Full Monty is directed and choreographed for Pittsburgh CLO by Barry Ivan, with musical director James Cunningham.

The cast is so large, and the fine performances so many, I’d wear out your screen trying to name all the names. Shout-outs are due to Andy Kelso for his lead role as laid-off lunk Jerry, and to young Jack Engel as Jerry’s 12-year-old son, and to Kevin Massey, who … well, you’ll see. Among the women, Sarah Uriarte Berry stood out to me as the mill supervisor’s bombshell wife, and everybody in the house loved Anita Gillette as the wisecracking older dame who plays the men’s pianist. Dance captain is Jessica Ice.

Full frontal nudity is portrayed but you won’t see it unless someone slips up. Through July 15 at Benedum Center, 237 7th St., Cultural District. For showtimes and tickets visit CLO on the web or call 412-456-6666.