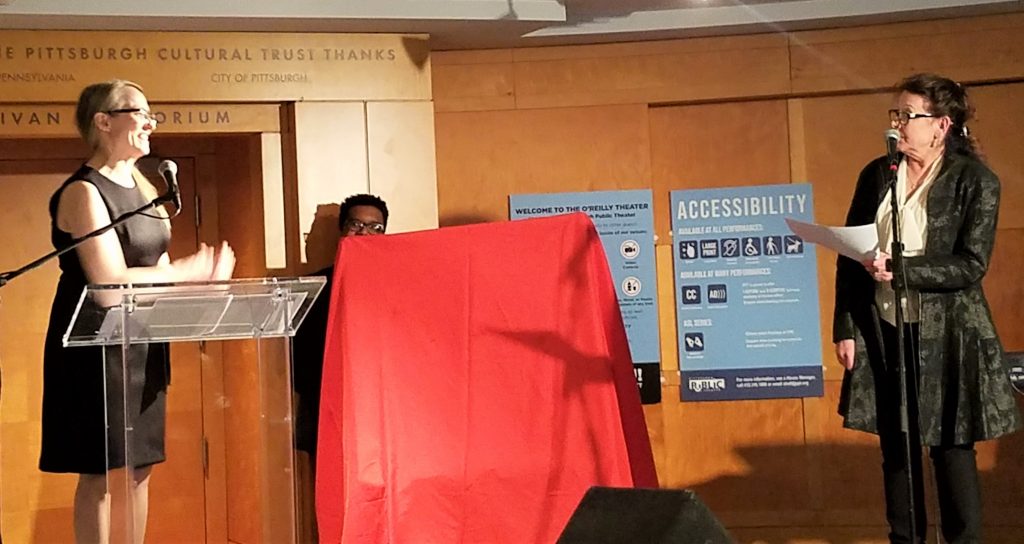 The O’Reilly Theater lobby was abuzz Monday night as people ate pastries, sipped wine and cocktails, and mingled in anticipation of Pittsburgh Public Theater’s 2020 – 2021 season reveal. Posters for the still-secret plays sat on easels covered by cloth around the lobby. Managing Director Lou Castelli thanked the audience of donors, trustees, and subscription holders and spoke about the legacy of the venerable Pittsburgh Public Theater.

Next, Artistic Director Marya Sea Kaminski took the stage to begin revealing the new productions, saying that the season is titled What the Heart Wants. And appropriately the first show is the musical She Loves Me, from contributors to Cabaret and Fiddler on the Roof. Talented local actor Drew Leigh Williams beautifully sang two numbers from the production accompanied by the highly skilled pianist Doug Levine. One of the songs was “Vanilla Ice Cream.”

Murder on the Orient Express, newly adapted from Agatha Christie’s novel, is the second play of the season. Kaminski called the story the blueprint of “whodunits.” The adaptation is by Ken Ludwig, known for plays like Lend Me a Tenor and Moon Over Buffalo.

The Public will be ringing in the New Year with Shakespeare in Love, which Kaminski called one of her favorites: “A beautifully crafted language comedy that is peppered with references to other Shakespeare plays.” Noted Pittsburgh actor Helena Ruoti, a new associated artist of The Public, will perform the role of Queen Elizabeth. Ruoti teamed up with Kaminski to do a short scene from the play with Kaminski playing Viola. Longtime board member Dr. Richard W. Moriarty also contributed a line to the scene.

It’s back to the future for The Public, an early supporter of playwright August Wilson’s work, with his Two Trains Running. Set in the Hill District in 1969, the play revolves around Memphis Lee’s Diner and the characters who frequent it. The diner is set for demolition and that’s not the only turbulence happening. Kamisnki says the play shows that “We can be heroes to one another every day.” Two Trains Running will be directed by Justin Emeka, currently directing American Son for The Public. Emeka also directed last year’s Sweat and he too is a new associated artist at the theater.

The Belle of Amherst is a classic one-person play about a period of writer Emily Dickinson’s life. Dickinson was a very talented pianist and she’ll be portrayed by an actor/pianist playing live music. The play is to be directed by Kaminski. Closing out the season is Dipika Guha’s Yoga Play, billed as “corporate culture meets enlightenment.” This satirical comedy imagines a company making products like yoga pants that exude a lavender scent when you sweat. The company has a crisis and calls in a spiritual advisor to assist.

Also on the new season’s schedule, Yinzer Yuletide returns for the holidays. A champagne toast concluded the reveal event. The Public’s 2020 – 2021 season looks promising and seems to have something enjoyable for a variety of tastes.