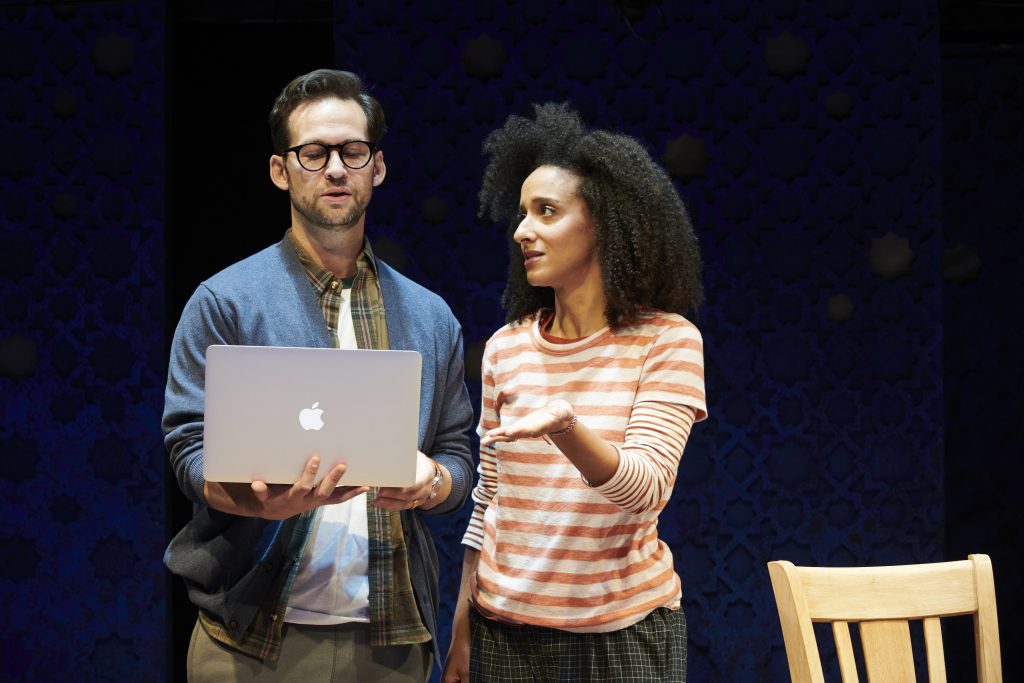 Abe (Jed Resnick) and his wife Sophie (Allison Strickland) question the authenticity of a surprise email.

The only thing amiss (and I mean the only thing amiss) with Anna Ziegler’s incredibly well-crafted play running at City Theatre through December 18 is its title. The Wanderers is a funny, brilliant study of two different marriages, seemingly running parallel courses in two different worlds of Jewish-American culture. While each relationship seeks to define the organic connection between a wife and a husband, the truth is found only in the magic of the moment. Yes, these couples meander through the dark troughs of rejection, of narcissistic ambition, of self-realizations that overshadow traditional belief. But what propels these human follies are immediate, volatile events: a chance meeting with a movie star, a birthday gift, an unfathomable nightmare, the soft sparkle of snowfall. Anna Ziegler’s characters are not wandering; they drive deep––and determinedly––to define happiness.

Yet, Ziegler’s story is lighthearted, never dire. In brief comedic vignettes, Director Colette Robert raises the curtain on Schmuli’s (Nick Lehane) and Esther’s (Moira Quigley) wedding night. Hasidic Satmar Jews, theirs is a traditionally arranged marriage, the betrothed having met but briefly before the ceremony. Abe (Jed Resnick) and Sophie (Allison Strickland) have known each other since childhood, their single mothers long ago bonded in defense against intolerant husbands. By contrast, theirs is a relationship unbound by any tradition, yet neither will admit their marriage was not wholly pre-ordained. No flirtations, no fairy tale ball––no pheromones––spark either relationship. And yet, there is early joy and harmony in creating new homes that soon welcome beloved children. But Abe is a self-absorbed, Pulitzer-winning writer whose wife wants to pick up the pen again, and Schmuli is devoted to his charismatic father’s fundamentalism which decidedly discourages mothers from seeking joy outside of the home. Thus, the course is set for each wife to fail, but it’s their husbands who trip up. Like mis-timed pratfalls, the injuries are tragically severe and costly. 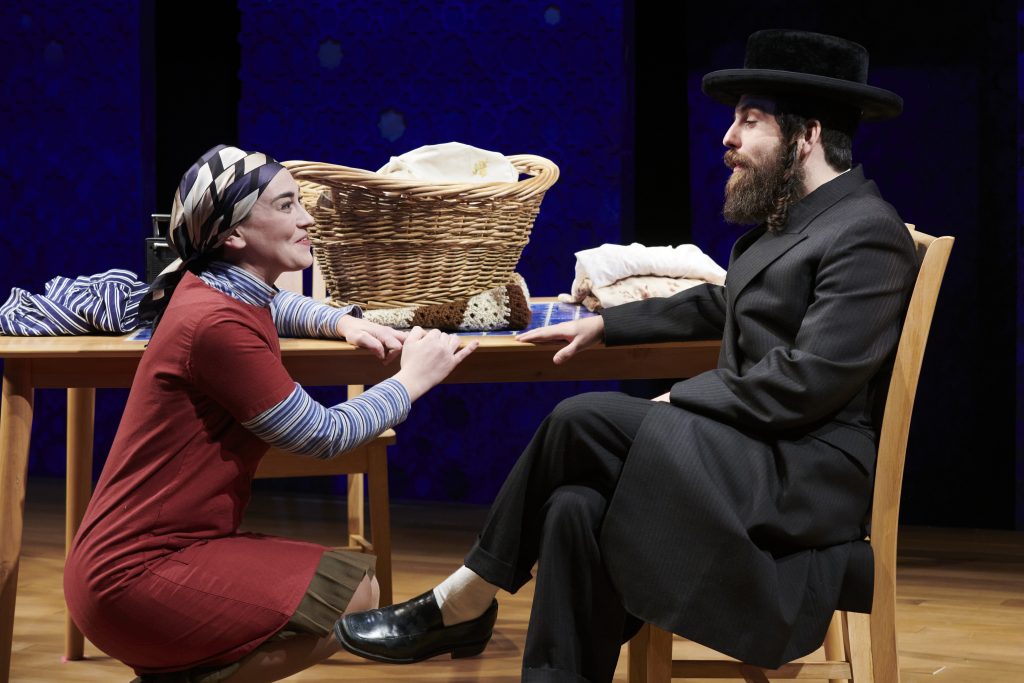 What makes Ziegler’s play of parallels so remarkable is her astounding craftsmanship. The Wanderers has been acclaimed by other critics as a “perfect play,” and it may be just that. The exposition is organically simple; the characters are well defined; their conflicts are purposeful, laughable, and deeply truthful; the story line that ensues is subtle, enticing, and anything but didactic. The audience learns what it wants to know only at the precise moment it must. And with that exacting discipline, Ziegler then twists the plot with a singular moment––indeed, a magic one––that reveals, like an evening’s snowfall under a full moon, a spreading glimmer of hope and good fortune. 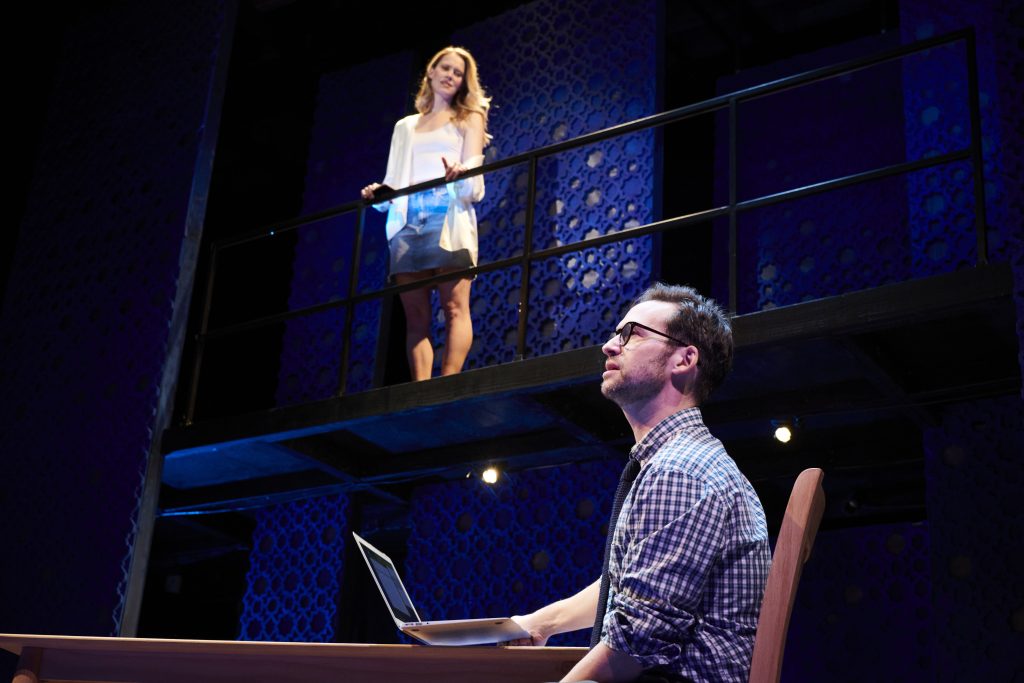 As Schmuli, Lehane is a soft and self-effacing newlywed. Quigley’s Esther is ebullient and ever so less shy. Her maternity scenes are riveting for the attention she must divide between her newborn child and well-worn mate. And both fine actors skillfully apply an Eastern European dialect, even when speaking Hebrew, which leaves no doubt to meaning or mood. (Give Lisa Ann Goldsmith, Dialect Coach, all due credit.) Jed Resnick, as Abe, smug in his success, ably carries a preponderance of the story because his issues include a second love interest, that of a cool, down-to-earth celebrity actress played honestly and smoothly by Sarah Goeke. Strickland, who plays Abe’s wife with casual patience and heart-warming grace, may have the hardest role of all. She must command the stage even when she’s not on it. And she does so with aplomb.

Speaking of staging, The Wanderers is exquisitely simple. Two chairs and a table, framed by solid walls, serve all of the actions’ needs. The characters are costumed sometimes in traditional wedding attire, other times in layers of frumpy shirts and long-worn pajamas. In both stage and costume design (Anne Mundell and Mindy Eshelman, respectively,) there appears as much thought in their concerted execution as in the shimmering details they ultimately reveal. The lighting is designed by Natalie Robin, and the sound by Jeff Sherwood.

Colette Robert’s direction is smooth and seamless. Characters enter and exit timely, but she allows scene breaks to bring on the next movement before dismissing the old. The energy flows without hesitation. Indeed, it’s rare that actors are allowed to turn their backs on an audience, but Robert has no fear of it, entrusted as she is with a great ensemble.

By any other name, The Wanderers is beautiful storytelling, a nearly perfect play in every way.

Early next year, NYC’s off-Broadway powerhouse, the Roundabout Theatre Company, will stage The Wanderers from January 26 through March 26. As such, the opportunity to see it earlier at City Theatre is a real treat. As playwright Ziegler reminds us, we should be “so grateful for what we have while we have it.” The Wanderers is playing now, only through December 18, at City Theatre, 1300 Bingham Street on the South Side. For tickets, go to City Theatre’s The Wanderers web page or call the box office at (412) 431-2489.

Dramaturg for the production is Clare Drobot. The stage manager is Patti Kelly.

Prentiss Orr writes about theater for Entertainment Central. His latest book, The Surveyor and the Silversmith, is a history of early Euro settlements and conflicts in today’s Western Pennsylvania.