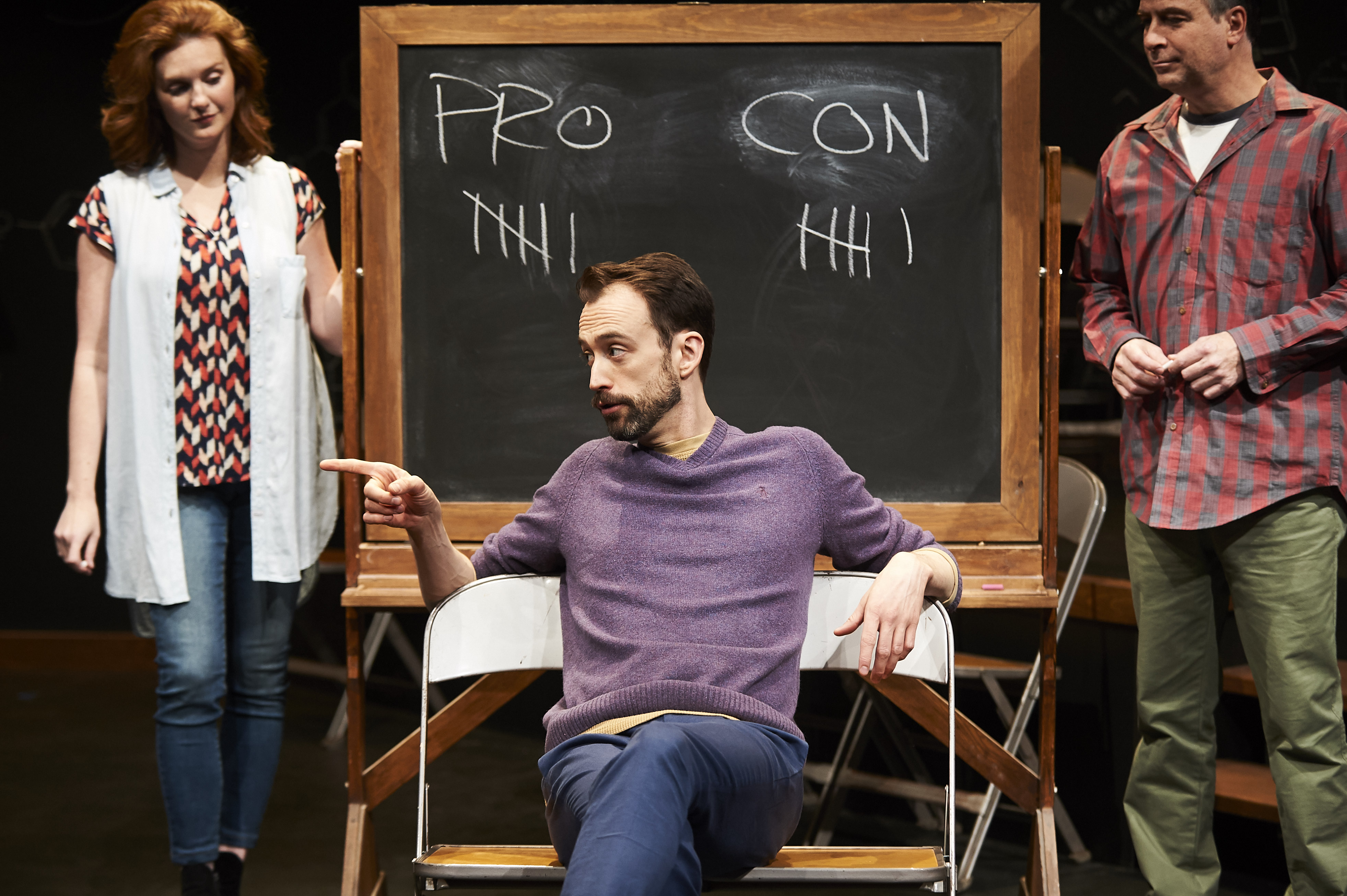 Sean (Kyle Cameron, seated) likes to get insanely, destructively too high. Crazier yet, he figures the costs and benefits balance out, though Daina Michelle Griffith and Daniel Krell don’t seem convinced.

Since The White Chip is an unusual play, we’ll give it an unusual review. It is first of all a play about addiction and recovery. This makes it an ought-to-see for people concerned with these issues, but apparently anyone can enjoy it. Various folks who saw the play on opening weekend at City Theatre, as I did, told me they liked it very much.

The endorsement is interesting, given that The White Chip (through May 6) is not like other popular addiction/recovery plays. There have been many—ranging from William Inge’s 1950 classic Come Back, Little Sheba, to recent hits such as Water by the Spoonful and The Motherfucker with the Hat—and while the struggle to stay sober is a central theme in these plays, they are fictional stories that mix the theme with additional major plot lines.

No mixing here. The White Chip serves a straight-up, 100-proof tale of one man’s drunken escapades and his eventual turnaround in Alcoholics Anonymous. That man is the playwright, Sean Daniels. The play depicts his true journey into 12-step land; the main character is even called “Sean.” Reportedly, the only fictional touches are minor ones used to streamline a life’s story down to 90 comic-dramatic minutes on stage.

Having learned this before going, I took a step of my own. Instead of bringing my wife or a theater-savvy friend with me, I brought a friend who’s in AA. Now you can have a review from two perspectives: The White Chip seen as a work of theater, and from the viewpoint of someone long in recovery. Let’s begin with AA Man’s summary:

“[The play] reminds me of an AA ‘speaker meeting,’ the kind where you have one person tell his or her story in some depth. This one is a sort of super-enhanced version. The guy’s story is dramatic to begin with, and you have really good professional actors acting it out.”

Theater-wise, The White Chip moves fast, squeezing a great deal into those 90 minutes. First we get a quick tour of Sean’s Mormon (yes, Mormon) family upbringing. Next we gallop through his sneak-a-beer teen years, his higher learning at the most non-Brigham-Young university imaginable—Florida State—and the launch of his budding theatrical career.

The play has only three actors. Kyle Cameron is Sean, while Daina Michelle Griffith and Daniel Krell play a lifetime’s worth of roles, from Sean’s frustrated mom and dad to the exasperated lovers, buddies, and colleagues who will finally give Sean’s antics a unanimous thumbs down.

I must admit that the theater critic in me had serious qualms during the opening parts of The White Chip. The actors seemed to be over-acting—too peppy, too brassy, too in-my-face. (The play is staged in City Theatre’s smaller studio space; it is an up-close experience.)

Worse, the early scenes used recorded sound effects: little clink-clinks and boings to punch up the funny bits. I am annoyed by TV sitcoms with laugh tracks. Hearing this awful practice emulated in a live theater trampled the good vibes I’d gotten from the pre-show mixtape, which included Queen’s “Fat Bottomed Girls.”

In short, I feared the play would be an overdone ham-fest. What a relief to discover otherwise.

The actors’ energy became infectious. The story got me hooked. In some of the sad scenes later on, I felt a tear or two threatening to drip on my notepad. When the audience gave a standing O at the end, I fumbled with the notepad and couldn’t stand up. Had to make do with a high sign to the cast.

The Vicious Cycle, the Virtual Headset

And speaking of “high,” AA Man identified strongly with the play’s “drunkalogue” episodes—the scenes that chronicle Sean’s increasingly warped thinking and bad behavior, as he turned himself from a hot young theater artist into a stinker nobody wanted to touch. The AA takeaway:

“I could relate to all of it. The specifics are different because I’m not a theater person and so forth, but the patterns of that addictive way of being are the same. Like, hurting other people! And then justifying it to yourself, which is easier if you get high again so you can’t hear your conscience talking, which feeds the vicious cycle.”

To my culture-critic self, Sean’s state of denial brought to mind an Internet meme: the “This is fine” dog who thinks he can chill while the house burns down. But to my AA counterpart, denial is only an aspect of the story:

“The big thing is that whole mind-frame of NEEDING to be high, as opposed to ‘let’s get a little high once in a while’ like normal people would do. To an addictive person, the real me is not good enough and neither is real reality. So it’s like putting on VR goggles—I have to drink or do a bunch of dope to be in my virtual reality.”

Here, we pause to marvel at the fact that such an apt analogy for getting smashed did not exist until modern technology came along. Now back to our program:

“So then you go around with the VR goggles on. How is that going to work? Well, people may think you’re charming for a while because you can dazzle them with your visions, like Sean does in the play. But then you start bumping into reality. When you knock over the hors d’oeuvres table, the charm sort of dissipates.” 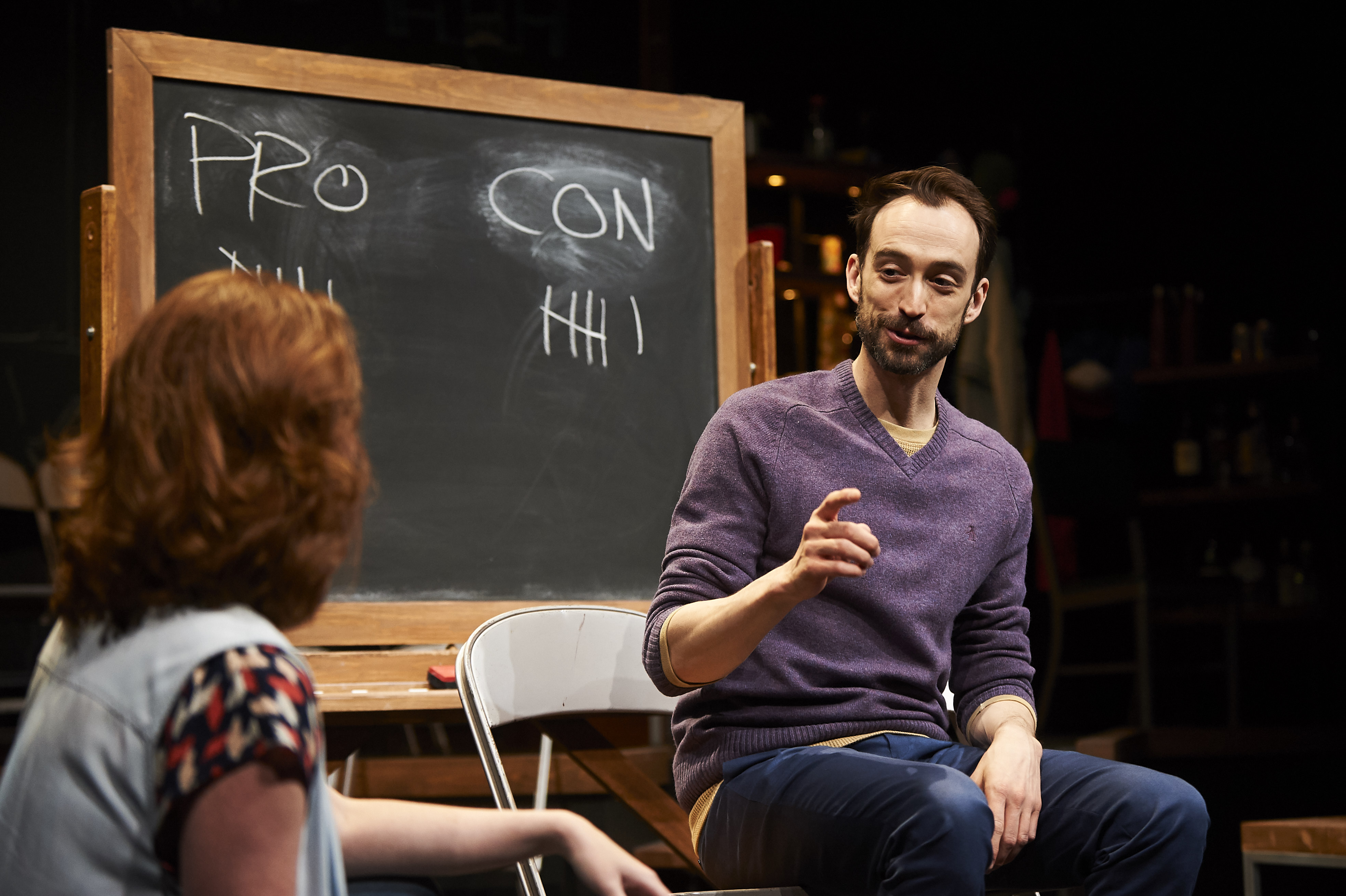 Does Sean see the light or is it just another con job?

The Spinach, the Spirit, the Real Thing

The play does not depict Sean ruining the hors d’oeuvres. Perhaps that was one of AA Man’s tricks. Sean does, however, continue to believe that His Highness is absolutely necessary for artistic creativity—and for sex.

“I definitely relate to Sean saying he couldn’t imagine having sex without getting high. Why should you, when you can eat your magic spinach and be like Popeye? It’s like Viagra for the soul. It works on every level—until you keep doing it, and then it doesn’t.”

Sean’s recovery begins when he enters a rehab facility and earns an AA “white chip,” a little plastic coin that marks his first 24 hours dry. He is a tough customer, though. As a never-again Mormon turned intellectual skeptic, he has trouble with the AA concept of finding and trusting a “Higher Power,” despite coaching from an AA veteran (played by Krell) who tells him he can define the Power however he wants.

The solution that Sean finds at last is rather strange. But it resolves his spiritual predicament, which, according to my AA better half, is essential:

“You’ll hear in AA that the drinking and drug-taking is just a symptom. Something is wrong under the hood, and I think the best way to describe what’s wrong is an illness of the spirit.

“When I was stuck in that place, I was not a totally bad person but my spirit was off. It felt incomplete or disconnected. That’s why I got, quote, ‘high.’ I was taking pre-packaged spirits, like genies out of the bottle, to try to elevate MY spirit and connect it with the great whatever—the Great Spirit, the great Circle of Life.

“Sometimes it seems to work! Except it’s like trying to short-circuit your way to enlightenment, and short circuits backfire. They blow your lights out. Then you have to find another way—not to get to nirvana like a holy guru, but just to connect with the spirit of life. The beauty of recovery is that it’s a beautiful way.”

Perhaps this accounts for The White Chip’s wide appeal. May the Force be with you. 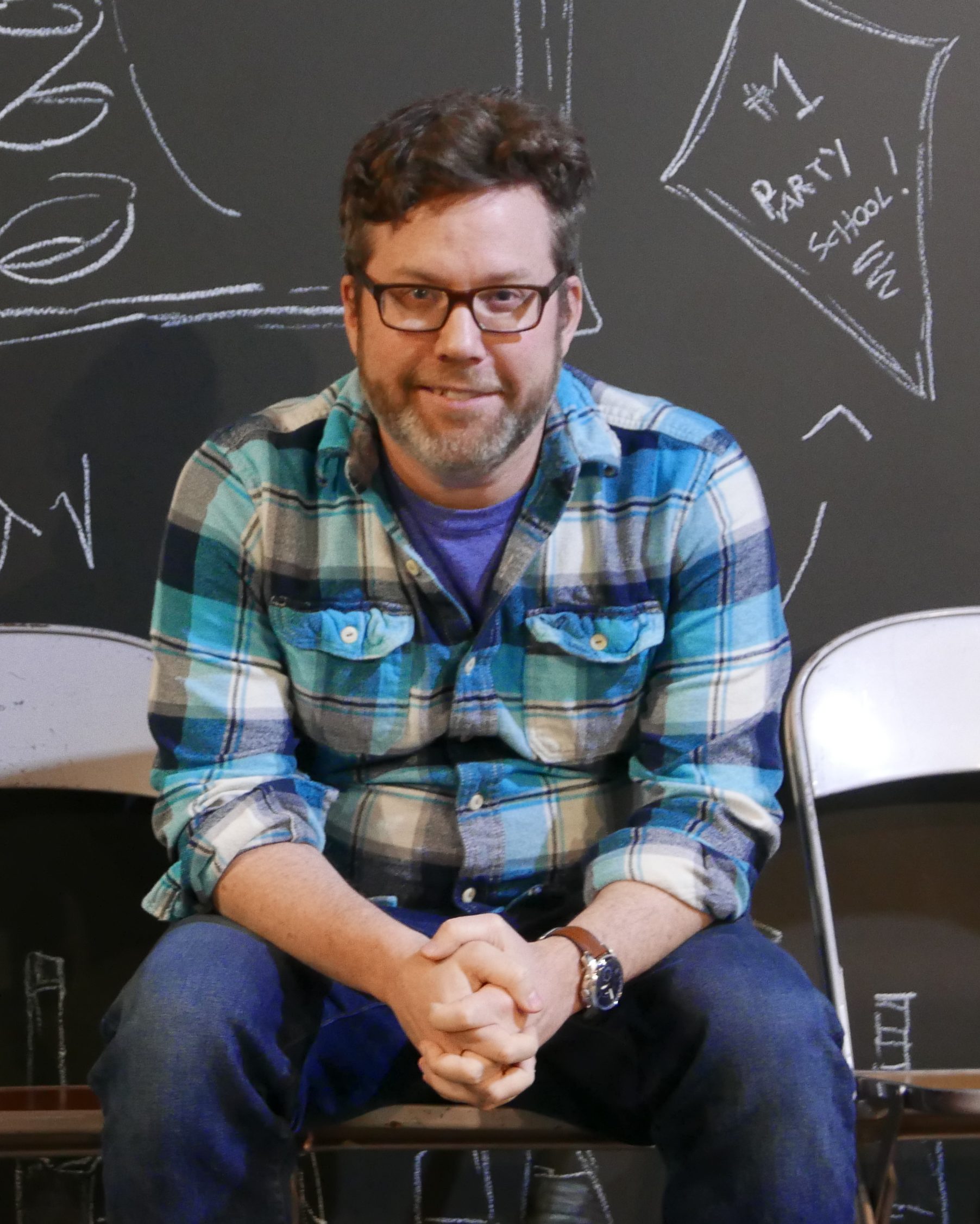 At last report, the real-life Sean Daniels is doing well. His play premiered at Merrimack Repertory Theatre in Massachusetts in 2016.

Here in Pittsburgh, The White Chip is directed for City Theatre by Sheryl Kaller. Through May 6 in the company’s Lester Hamburg Studio Theatre, 1300 Bingham St., South Side. For showtimes and tickets, visit City on the web or call (412) 431-2489.