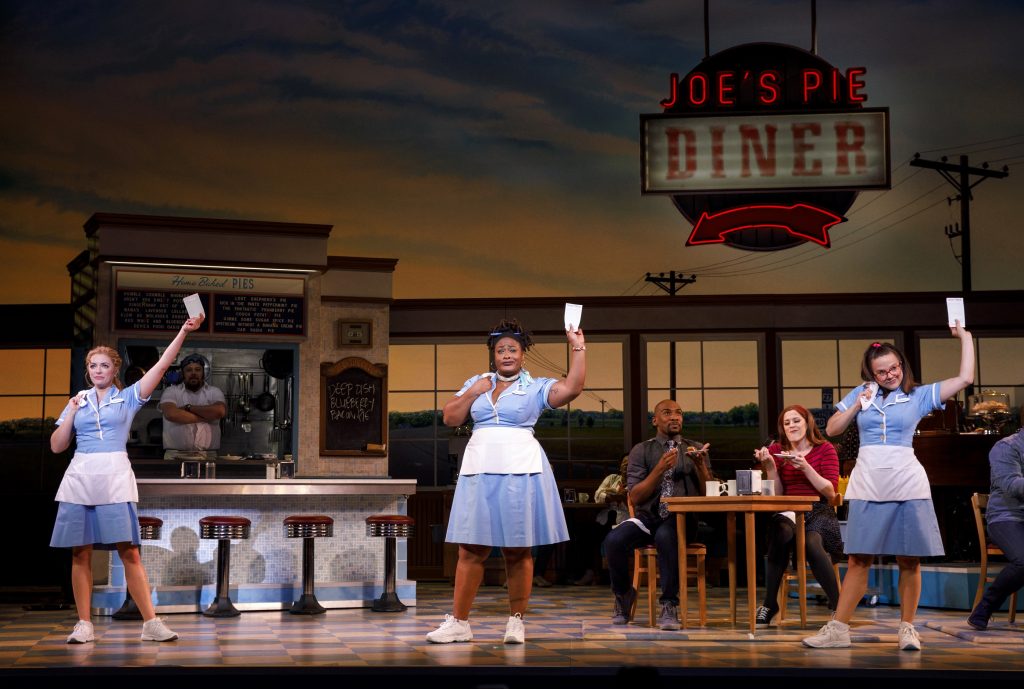 While I was growing up, and into my mid-twenties, my family owned a restaurant in Shadyside, The Gazebo: Bakery, Deli, Restaurant. Like Joe’s Pie Diner in the musical Waitress, our restaurant was also famous for its baked goods, especially cheesecakes. And like Joe’s it was a continually unfolding real-life drama starring employees who included waitresses, cooks, bakers, bakery clerks, and deli workers, plus our customers. On different days, and sometimes on the same day, our restaurant’s play could be different genres: drama, comedy, tragedy, farce, or occasionally a mystery. So it was with great interest that I went to see the touring production of Waitress (through March 11) at Benedum Center. The musical included most of those genres too, mainly focusing on the restaurant friendships between three waitresses, the people in their lives, and a somewhat adversarial relationship with Joe’s cook, Cal.

Waitress the musical is based on the 2007 film of the same name which was written and directed by the late Adrienne Shelly. The story focuses on Jenna, who works as waitress at Joe’s Pie Diner in the rural South. She feels trapped in a loveless marriage and yearns to leave her husband Earl and start anew. An unwanted pregnancy ratchets up the pressure on her. Jenna looks for love from her married gynecologist Dr. Jim Pomatter. 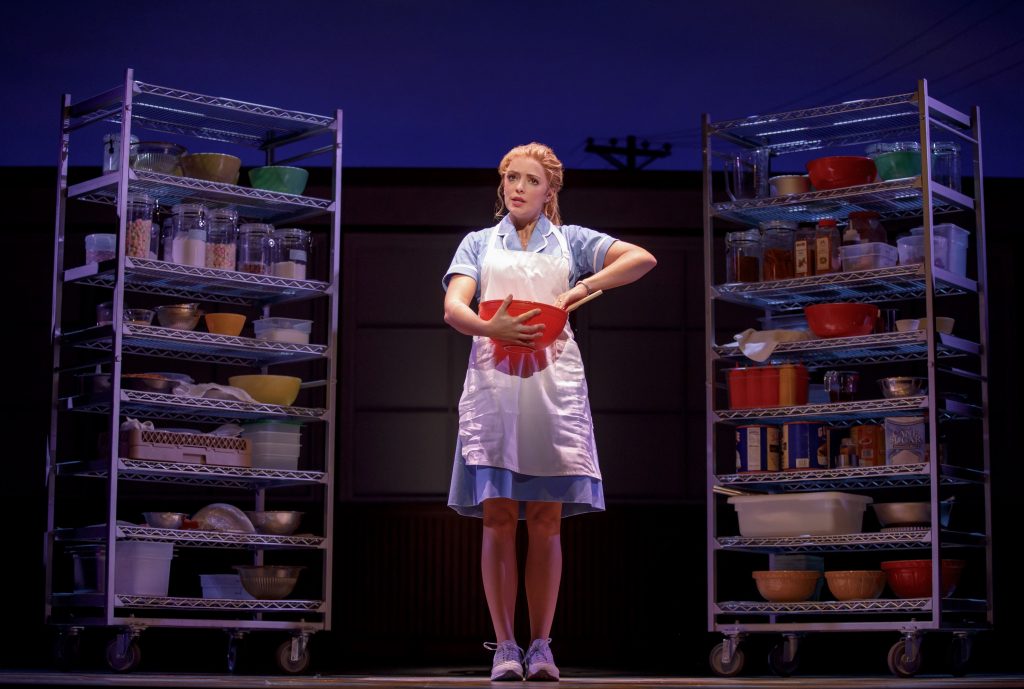 Jenna mixing up a new pie about her mixed-up life.

Part of her job at the diner is creating delicious pies. Every day she bakes a pie of the day that she names after things in her life, e.g., My Eggs Betrayed Me Pie; Life, Liberty, and the Pursuit of Happiness Pie; Deep (Shit) Dish Blueberry Pie; and Pineapple Upside Down Pie (she bakes this one for Dr. Pomatter). Jenna is an expert pie baker and wants to enter a baking contest in a neighboring town. If she wins, the prize money is just the ingredient with which to start a new life.

The musical has music and lyrics by pop musician Sara Bareilles, a six-time Grammy Award nominee, and a book by Jessie Nelson. Waitress was first staged at the American Repertory Theater in Cambridge in 2015 and premiered on Broadway at the Brooks Atkinson Theatre in April 2016. The show was created by an all-female team. It was a big success on Broadway and garnered numerous award nominations, including four for the Tony Awards and one Grammy nomination.The U.S. national tour of Waitress began last October in Cleveland.

Jenna (Desi Oakley) loves to bake as it reminds her of the times she made pies with her dear late mother. Her life is a train wreck, but she has support from her two waitress friends Becky (Charity Angel Dawson) and Dawn (Lenne Klingaman). They are definitely a power trio as they sing in wonderful harmonies, serve patrons at the dinner, and discuss life’s up and downs.

Oakley is brilliant in the lead role, portraying the charismatic Jenna with a Southern drawl, soaring vocals, and superb acting skills. She is a Broadway veteran and a singer/songwriter in her own right. Adept at both the dramatic and humorous parts, Oakley is fun to watch. One inspired moment of choreography comes when she dances with a partner at the other side of her pie-making table while the table spins in circles.

Dawson, a big and vivacious woman, has also appeared in several Broadway plays and originated the role of Nurse Norma when Waitress began at the American Rep. She has a voice that can really reach the rafters. Dawson is especially funny in her comedic showdowns with the diner’s cook, Cal. 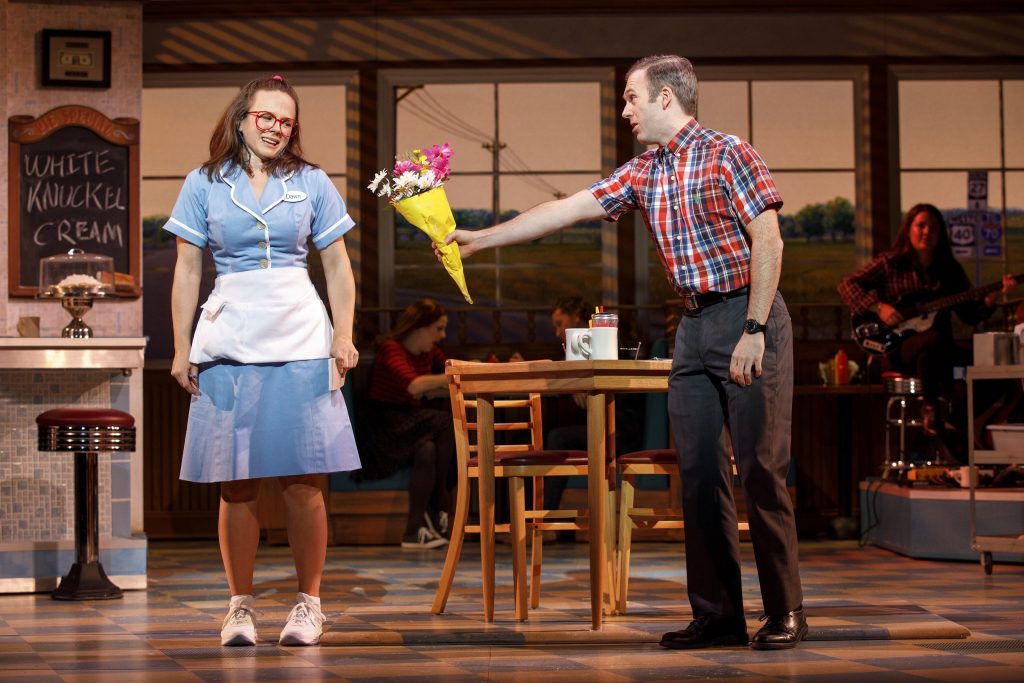 Common interests often are the basis of love, as is the case with Dawn and Ogie (Jeremy Morse shown here, now played by Jim Hogan).

Rounding out the waitress trio is Klingaman as the slightly nerdy Dawn, who dutifully keeps the ketchup and mustard squeeze-bottles filled and the menus clean, to full effect. A fun scene occurs when Jenna and Becky help her put together an online dating profile, in which she calls herself Dawn Rising and mentions that she has played Betsy Ross in numerous Revolutionary War reenactments.

There truly is someone for everyone and someone responds to Dawn’s online profile. His name is Ogie (a nickname he picked up because he is originally from Oklahoma) and he is also slightly nerdy and, can you believe it, a Paul Revere reenactor. Jim Hogan plays Ogie with passion, slight clumsiness (as required by the role), and great athleticism. In the Ogie role on Broadway in 2016, Christopher Fitzgerald won a Drama Desk Award for Outstanding Featured Actor in a Musical. 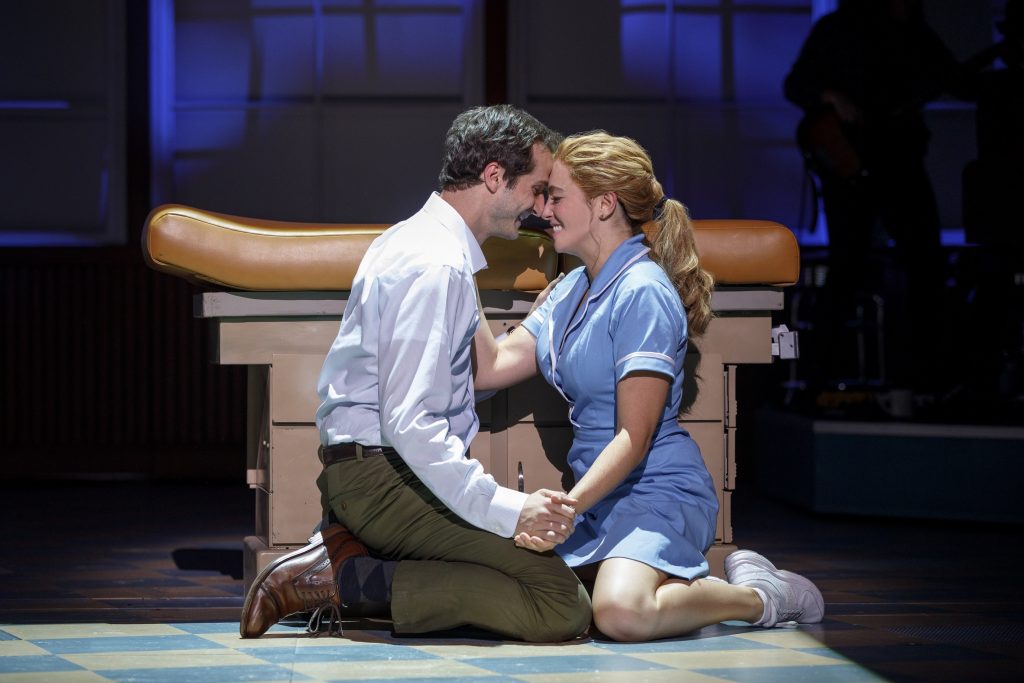 Can love bloom in a gynecological exam room between Dr. Pomatter (Bryan Fenkart) and Jenna?

Bryan Fenkart as gynecological love interest Dr. Pomatter plays his role in much the same way that Hogan does with Ogie, in a  slightly nervous and humorous manner. He and Oakley as Jenna have moves on the exam table that are worthy of a gold medal in gymnastics on the pommel horse. Dr. Pomatter not only gets hooked back on sugar, but on Jenna as well.

One of Jenna’s strong supporters is Joe, the owner of Joe’s Pie Diner and several other businesses in town. Although he is very particular about his order, and has a fondness for tomatoes, he always knows what Jenna is up to and voices his support. Larry Marshall plays Joe in a strong, loving way and has his own moment to shine with the song “Take It From an Old Man.”

Ryan G. Dunkin is fun as the waitresses’ foil, the cook/biker dude Cal. Another anti-hero is Jenna’s husband Earl, whose attitude of being mad at the world (and especially Jenna) puts him at risk of losing her. Nick Bailey in the role flashes machismo and vulnerability. Nurse Norma (Maiesha McQueen) provides some comic relief as the all-knowing assistant to Dr. Pomatter.

The whole ensemble does a very nice job of singing, dancing, and pie dancing. Lulu, Jenna’s daughter, appears at the end of the play and provides a beautiful and cute spark. The Lulu part is played by young girls in each city of the tour. On the Pittsburgh tour stop she is played by Ainsley Christof and Camlyn Reace.

The whole score of Waitress is very enjoyable. Notable numbers include the opener “What’s Inside,” whose “sugar” snippet can be heard whenever Jenna starts to bake in the show. Taking a pregnancy test has never seemed so musical as in “The Negative.”  In “What Baking Can Do,” Jenna reflects on how baking helps her and reminisces about her late mother. “Bad Idea,” sung by Oakley and Fenkhart, shows that love can have its own power even if it doesn’t make sense. Oakley sings a desperate solo with “She Used to Be Mine,” a song about herself—and her loss of self—which includes the strong lyric “Sometimes life just slips in through a back door / And carves out a person and makes you believe it’s all true.” The production does end on a ray of sunshine with the ensemble number “Opening Up.”

The live music is provided by a pop/rock band seated at stage left, as if they are actually in the diner. They are moved in and out on risers and are visible mainly in the diner scenes. The musical coordinator for the band is John Miller and Jenny Cartney is conductor/pianist.

The sets are very well done by Set Designer Scott Pask. The diner has the feel of an actual diner with a counter where patrons can sit on stools, a small kitchen with pots and pans, tables, booths, a neon sign, and a sign board that displays Jenna’s pie of the day. Jenna and Earls’ apartment looks like they borrowed their green plaid couch from the former “Roseanne” TV show. It fits right in with their old wood-paneled walls. One especially cool set feature is the pie coolers in each side of the stage frame, loaded with pies. Lights turn on and off in the cases to showcase the cooler and pies in certain scenes. In the diner the pies are set on top of the band’s grand piano in front of a divider, on covered pie holders. Under Costume Designer Suttirat Anne Larlarb, the diner and other apparel looks good and authentic.

Pies for the show are supplied by Whole Foods Markets. In a great merchandising move, individual size pies in a jar are sold in the lobby and are baked by Waitress pie consultant from New York, Stacy Donnelly and her Cute as Cake Bakery. They come with a little spoon and you can even take the pie into the theater with you and eat pie while watching a musical about baking pies. Wonderful!

Waitress is a fun, female-driven musical that shows that with confidence and support from friends and loved ones, anyone can turn their life around, no matter how screwed up it is.