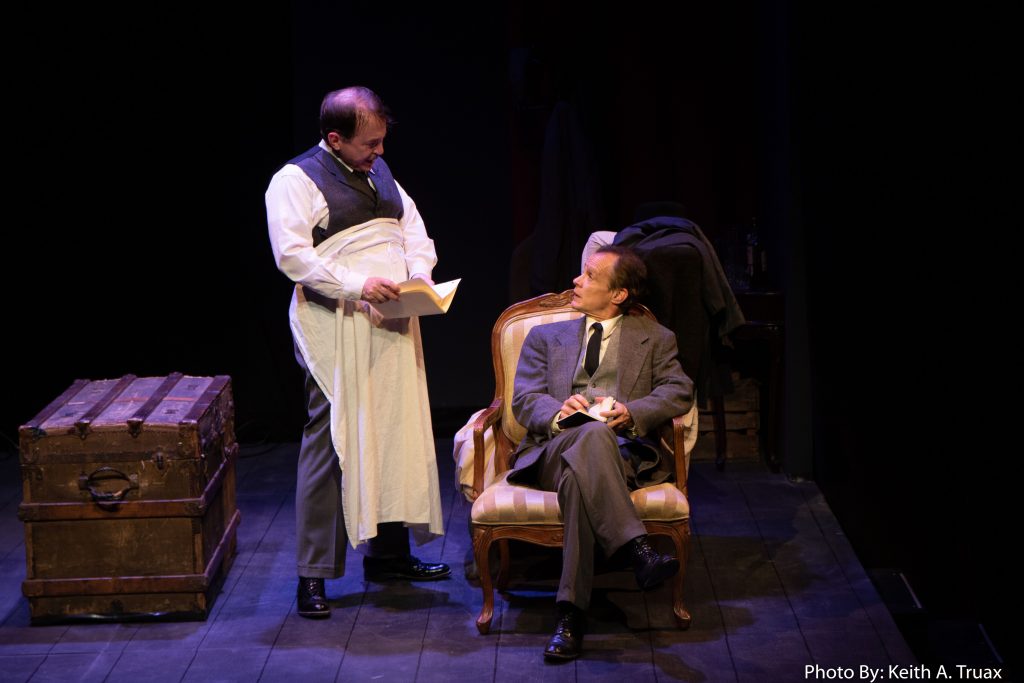 There is something quite exquisite about watching two of Pittsburgh’s top actors plying their craft in a basic dialogue play. This is the case with PICT Classic Theatre’s The Woman in Black, onstage at WQED’s Fred Rogers Studio through November 23. Featuring actors Martin Giles and James FitzGerald, the play is an adaptation by Stephen Mallatratt of Susan Hill’s 1983 novel of the same name. Set in England in the 1930s, it tells the story in Gothic style.

The play opens with Arthur Kipps (Giles), a retired solicitor, entering the theater from the right of the seating risers. He walks around the stage, taking it all in, before awkwardly climbing up onto it. No words are spoken for several moments while Giles plays Kipps wonderfully as a slightly bemused everyman. He starts to read aloud, in a monotone voice, a story from a binder he has brought with him. After a few passages are read, a voice calls out from the audience seating area for Kipps to put more emotion and life into his read. It is The Actor (FitzGerald) that Kipps has hired to help him tell his real-life tale to his loved ones. After Kipps continues with his flat read, the actor barks out, “Hum and mumble…as the audience one by one expire from boredom.” After several more attempts, Kipps starts to give a more emotive telling and The Actor rewards him by saying, “We’ll make an Irving [English acting great Sir Henry Irving] out of you yet.” 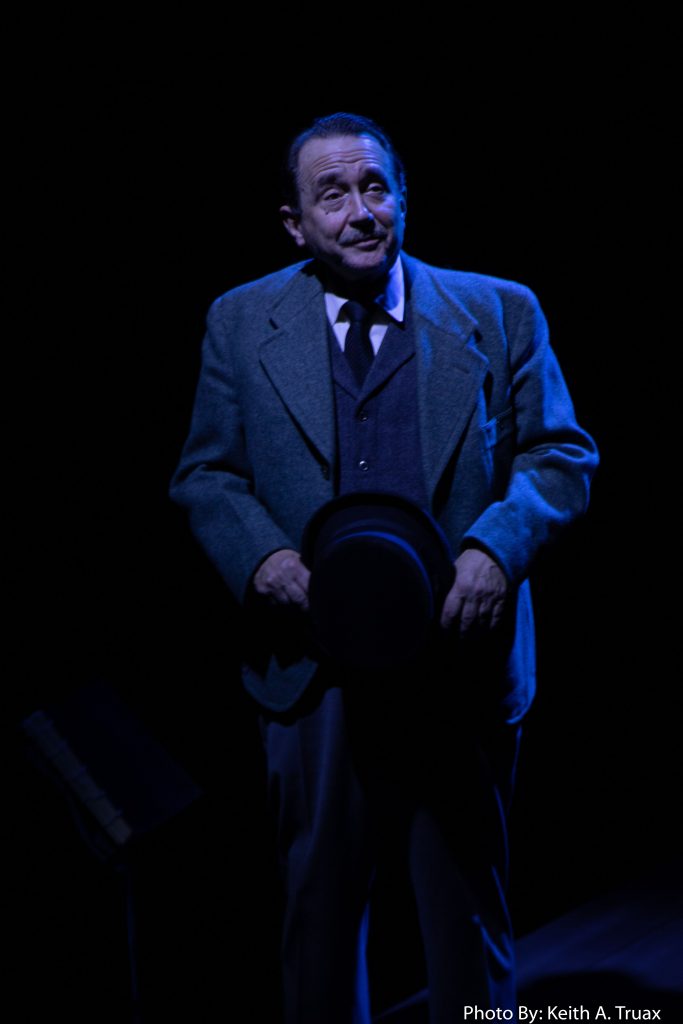 Day-by-day the two of them work out the telling of the tale, incorporating props and sound effects. Each actor plays multiple parts, Giles six and FitzGerald three. Giles and Fitzgerald play very well together. As they work their way through the binder, the story is revealed. The Actor plays Kipps’ real-life role (and two others) while Kipps plays the people he encountered and acts as a narrator in certain scenes.

The story details how Kipps, as a young solicitor (i.e., lawyer), was assigned to attend the funeral of and settle the affairs of one of the firm’s longtime clients, the recently deceased Alice Drablow. Her estate is located in the fictional English coastal town of Crythin Gifford. Mrs. Drablow, for many years a widow, had no heirs and lived in the desolate Eel Marsh House, accessible only by the Nine Lives Causeway during low tide. It is surrounded by marshes and often a cold sea fog.

Kipps finds that everyone in the town is reticent to speak about Mrs. Drablow. Then in the church graveyard during the funeral, he sees a gaunt woman in black with a black veil. He asks his local associate who was also at the funeral if he had noticed the woman. That man had not. Kipps goes to Eel Marsh House and stays overnight working on Mrs. Drablow’s papers. He hears loud screaming and sees the woman in black walking by. He does not believe in ghosts but is becoming unsettled by the situation. A local landowner gives him a dog to accompany him at the estate. It’s fun to watch FitzGerald interact with the dog, who isn’t seen or heard.

As Kipps and The Actor continue to work out the telling of the story it almost blends into a full play, and you think you’re viewing the events by actually being there and not watching a dramatic reading. It also helps that a room is revealed with covered furniture, as it would be in a classic haunted house, and with children’s clothes and toys.

Kipps learns more details about Mrs. Drablow and the ghastly woman haunting the estate. He also has several more sightings of the spooky spectre, who slowly emerges from different places. While watching the actors on the stage I noticed the woman in black coming into my peripheral vision from the side of the seating risers. She walks about slowly, not saying anything, but conjuring up a deep feeling of horror.

I have purposely not given more details to avoid any spoilers. The play holds back specific details until layers are peeled away and ghostly encounters are had. And there is a fantastic surprise ending that comes as a “Twilight Zone”-like mind blow. 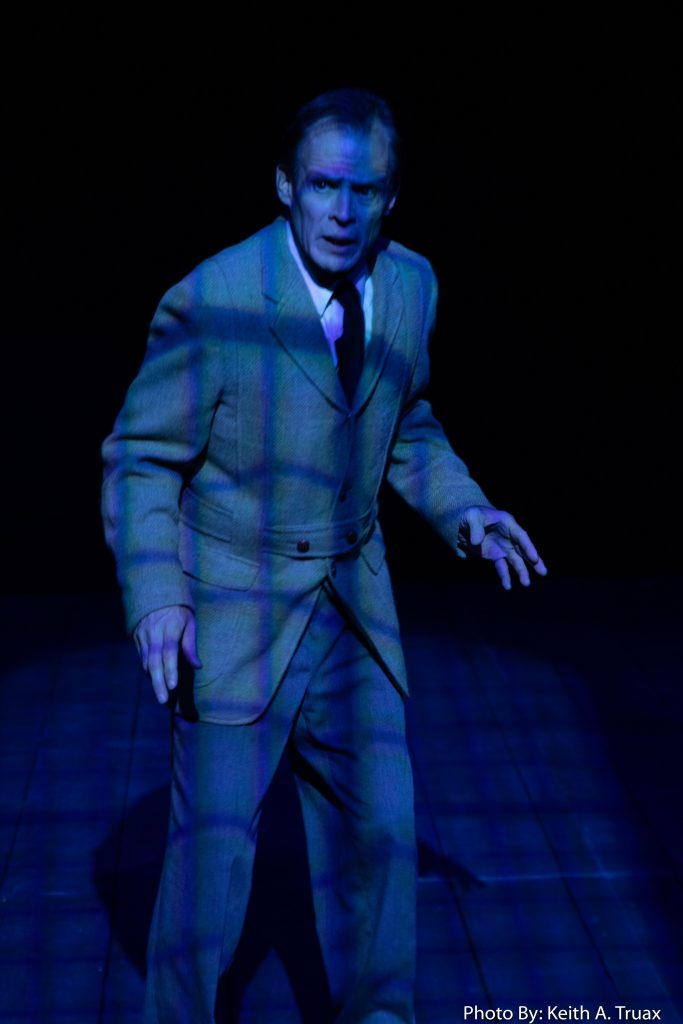 FitzGerald plays the role of The Actor.

After the Sunday matinee performance that I attended, there was an audience talkback with PICT Artistic and Executive Director Alan Stanford, who also directed the play, along with Giles and FitzGerald. The woman in black part is uncredited.

Stanford said that he was involved with a production of The Woman in Black earlier in his career in Dublin, Ireland. He also helped develop certain aspects of its sound track. “I’ve tried to secure the rights to produce this play at PICT for six years,” Stanford said. He thinks because he had  produced an early version of the play, it helped him finally land the rights. The Woman in Black is the second longest-running play in the history of London’s West End theater district, having opened there in 1989. Stanford added, “This is a play that truly shows what making a play is like.”

I asked Giles and FitzGerald what they thought about their roles. Giles said that he enjoyed playing the six different parts, but he found the narrator role a little tedious. Although Giles may not have found it particularly interesting, the narrator in certain scenes gives the play a tone and texture somewhat evocative of an Edgar Allan Poe story. Fitzgerald, looking relaxed in the set’s comfortable-looking easy chair, spoke about how the audience has to engage because it’s an old-time ghost story—an oral story. He also jokingly commented that one of Giles’ characters, the landlord, seemed a little angry today. Everyone had a good laugh about his comment. An audience member asked about the ghost-light prop on the stage in the play. Stanford smiled and said “There’s a ghost in this studio and he wears a red cardigan.”

The Woman in Black ran smoothly under Stanford’s direction and both actors were magnificent. The woman in black, whoever she was, played her role very well too. The set design and effects for the hidden room were well done, as were the lighting and sound design. There are some loud screams and an occasional blackout. This is a two-act play that runs approximately two hours with a 15-minute intermission. 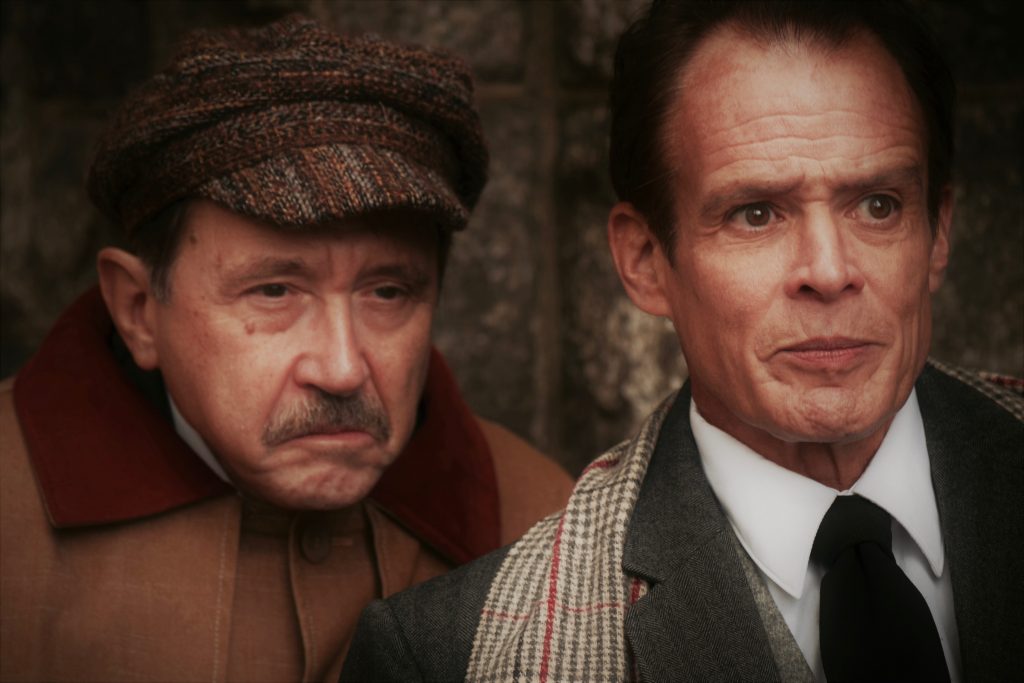 Something unnatural is afoot in ‘The Woman in Black,’ and actors Martin Giles and James FitzGerald are on the watch. (photo: Alan Stanford)

The Woman in Black runs through November 23 in the Fred Rogers Studio at WQED, 4802 Fifth Ave., Oakland. For tickets and more information visit PICT Classic Theatre’s website or call (412) 561-6000.