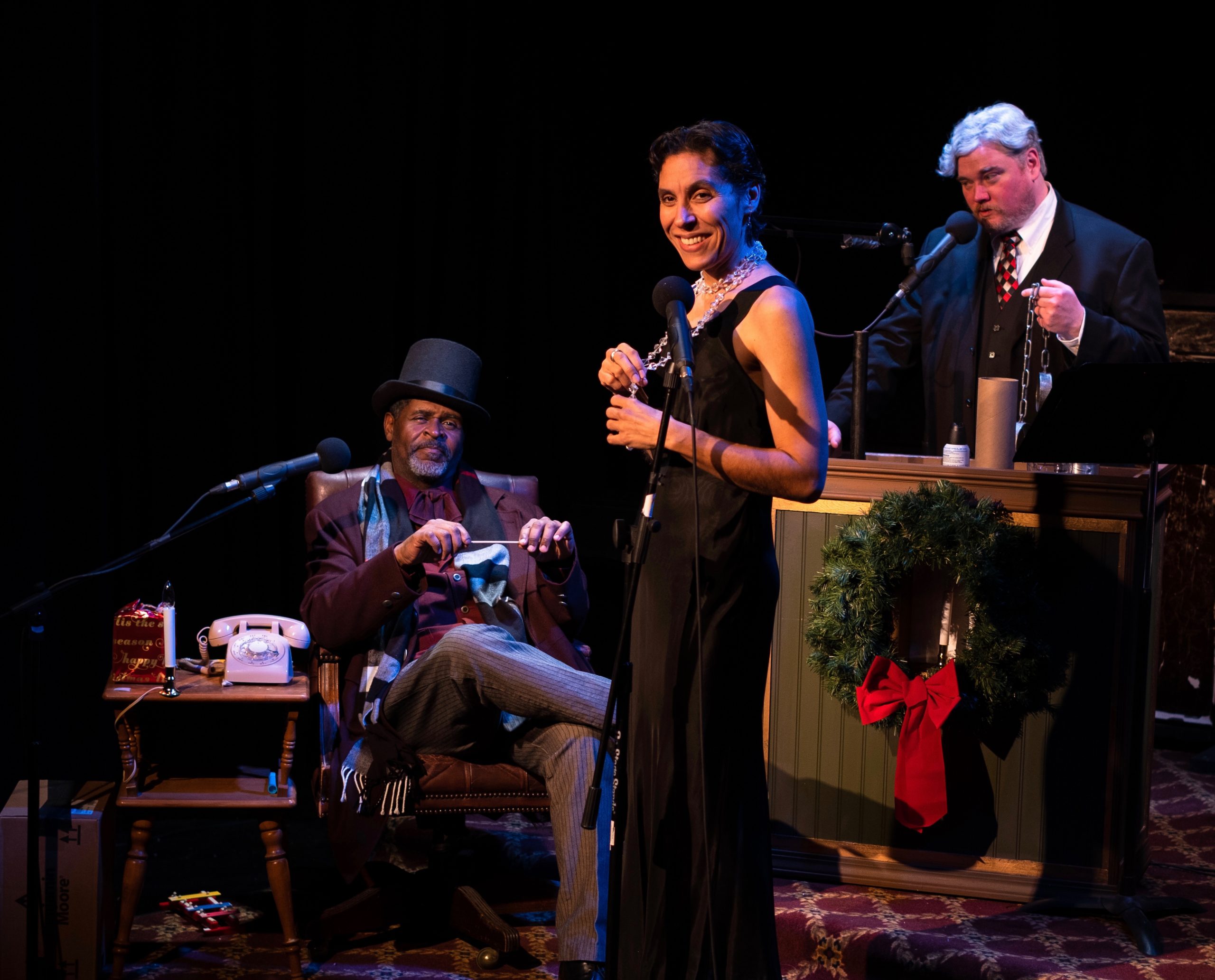 Three-fifths of the ‘Yinzer Scrooged’ gang are cued up here: Shammen McCune (center) as the Ghost of Christmas Present, Michael McBurney (right) rattling the chains that Marley once bore, and Wali Jamal, glowering from the rich man’s chair, as you-know-who.

Can a parody be a serious work of art? Yes. Cervantes parodied knightly fantasy tales in Don Quixote and wrote a great novel. “Amish Paradise” and “Eat It,” classics by Weird Al, operate on levels beyond the spoofing of gangsta rap and Michael Jackson.

Which brings us to Yinzer Scrooged. Connoisseurs of good theater should reserve tickets promptly, before they’re gone. This play at Bricolage Production Company (through December 21) is more than a goofy Pittsburgh-ized takeoff on A Christmas Carol. It’s a strong adaptation—one that brings home the Charles Dickens story for modern times.

I laughed. At several times, I felt a tear or two or three trickling down my cheek. And I walked away pondering, anew, the contradictions in our crazy socioeconomic order. 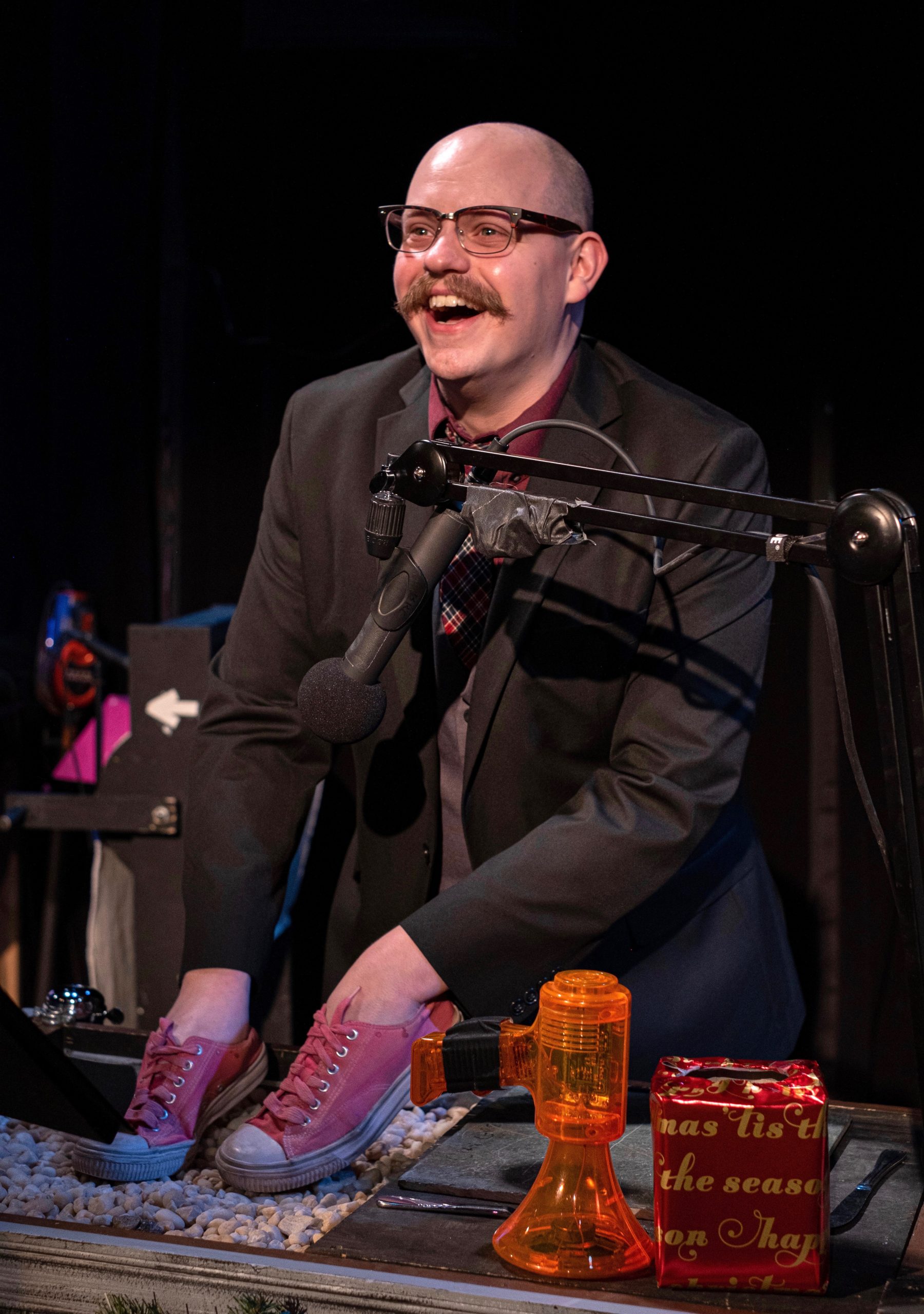 ‘Yinzer Scrooged’ is presented in the format of a live radio play, which means that Tiny Tony’s tiny footsteps are done thusly by Connor McCanlus.

Yinzer Scrooged moves the action from early industrial-age London to the postindustrial Pittsburgh of today, which involves changing many of Dickens’ details. For example, Bob Cratchit and his traditional family are replaced by single mom Barbara Cratchit (Jaime Slavinsky), raising her kids with Grandpa’s help while she works as an office cleaner. The shift also lays the basis for a lot of the play’s laughs. Tiny Tim becomes Tiny Tony, an alliterative name that elicits titters

Further, Tiny Tony is played by Connor McCanlus, a big man with a shiny shaved head. When he plunges into the child-sized role, squealing gleefully over a humble dinner—“We’re having pierogies filled with ranch dressing!”—it’s like watching Curly wake the ghost of Stooges past.

That kind of humor could get trite ‘n corny if it was all there was. But there is much more, starting with the Scrooge character, who’s now a hard-driving, corporate-empire-building CEO.

His name is Jeffenezer Scroogeoff. He heads the health care conglomerate PMCFU. An announcement before the play says any resemblances to living Pittsburghers are coincidental, and such coincidences do happen. I will never forget the time I married someone who turned out to be my wife.

The real Jeffenezer Scroogeoff needn’t worry, though. If the play were set in Seattle we’d have a Jeffenezer Bezoscrooge. But this is Pittsburgh, so Scroogeoff it is. Played with suitable arrogance by Wali Jamal, he serves as our hometown rep for other CEOs running the big tech firms, energy firms, and so forth that do so much to make America what it is.

A Laugh that Echoes, a Friendly Neighbor

We are lucky indeed that Yinzer Scrooged is set in Pittsburgh, for it has allowed the writer, Tami Dixon, to give Scroogeoff a host of ghosts from Pittsburgh’s heritage. Arriving first is the ghost of Scroogeoff’s business idol, Andrew Carnegie (Michael McBurney). Carnegie’s spirit is doomed to roam the earth in chains despite his philanthropy, because he squeezed a fortune from steel mills by not wasting money on wages and safety.

That wordless belly-laugh is one of the best lines in Yinzer Scrooged. It says more in two seconds than any hundred-thousand-word critique of the capitalist ethic ever did. It’s also funny, and it cranks up the play’s comic intensity for the next scene, which adds yet another dimension.

The Ghost of Christmas Past is Mister Rogers (McBurney again). There have been some good Fred Rogers parodies, such as Eddie Murphy’s “Mister Robinson’s Neighborhood,” and the one in this scene belongs high on the list. Actor McBurney captures Fred’s demeanor nicely while interacting hilariously with Jamal’s Scroogeoff. 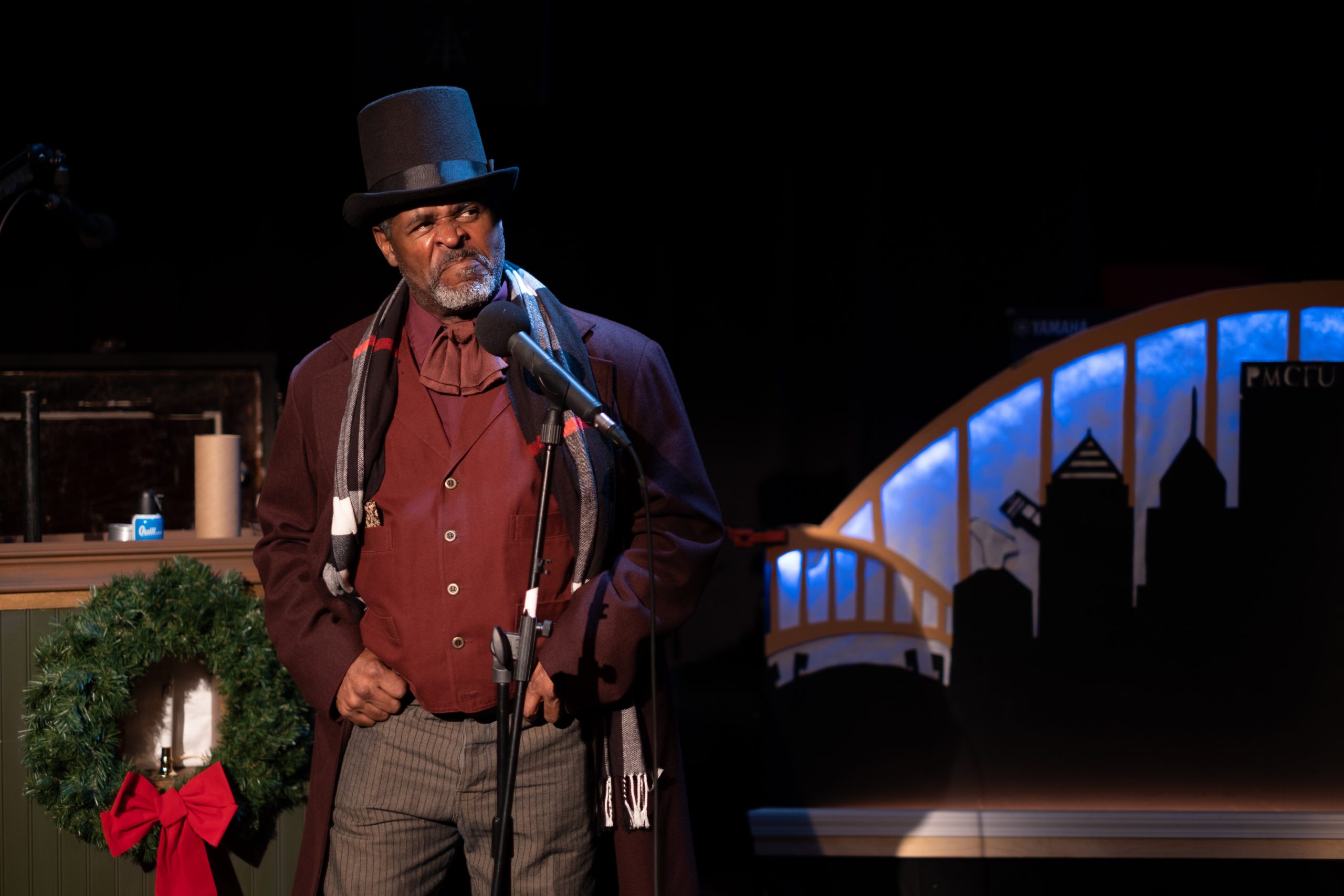 Those feelings inside? Scroogeoff prefers to project a tough-guy facade.

In Dickens’ original story, Scrooge is awed and fascinated when the ghost invites him to journey into the past. Not Scroogeoff. He keeps his curmudgeon dukes up, fighting Fred’s gentle entreaties: “Take your soft hands off me!” Then, as Fred persists, trying to soothe and probe the beast with remarks like “When we can talk about our feelings, they become less scary,” Scroogeoff goes deeper into defensive rage. The scene is a multi-layered hoot. On one level it’s a comic-book battle of opposing archetypes, while at the same time it’s a type of encounter we’ve all taken part in. Probably from both sides on various occasions.

What will finally get through to Scroogeoff? I reject the phrase “a badass woman” because (a) I detest the cliché, and (b) that’s not how Shammen McCune plays the Ghost of Christmas Present. She identifies herself as Lena Horne, the late singer and civil rights activist, who lived in Pittsburgh’s Hill District during her young-adult years.

Truly tough women (and men) don’t usually act like badasses, or like any sorts of asses. More often they exude the commanding, stately ease that McCune embodies in the role of Lena. Ms. Horne can be light-hearted, and she’s loaded with wisecracks for cutting Scroogeoff down to size. We’ve learned by now that the CEO has a tanning-bed tan, to which the ghost refers by addressing him in 50 shades of orange—mock-affectionately calling him “pumpkin,” “butternut,” “circus peanut,” et cetera.

Somehow the epithets come across as not cruel; just the truth. Lena also has a gift for straight-talking to Scroogeoff’s self-interest, warning him that his top-heavy perch at the top is not sustainable. Her visit—combined with the insistent voices of some other female characters (played in role-hopping mode by either McCune or Jaime Slavinsky)—seems to provide the tipping point that makes a hardass turn gradually into a man of the people.

You know how the story ends. Yinzer Scrooged follows the script of A Christmas Carol closely, even quoting or paraphrasing lines from Dickens at key points. Only a bunch of characters, circumstances, and actions that make stuff happen are changed, for purposes of comedic relevance.

How the Team Wins (and How We Sometimes Lose)

Please permit a sports analogy. Yinzer Scrooged works for the same reason that good teams win consistently. It has a well-balanced mixture of strengths at every position. 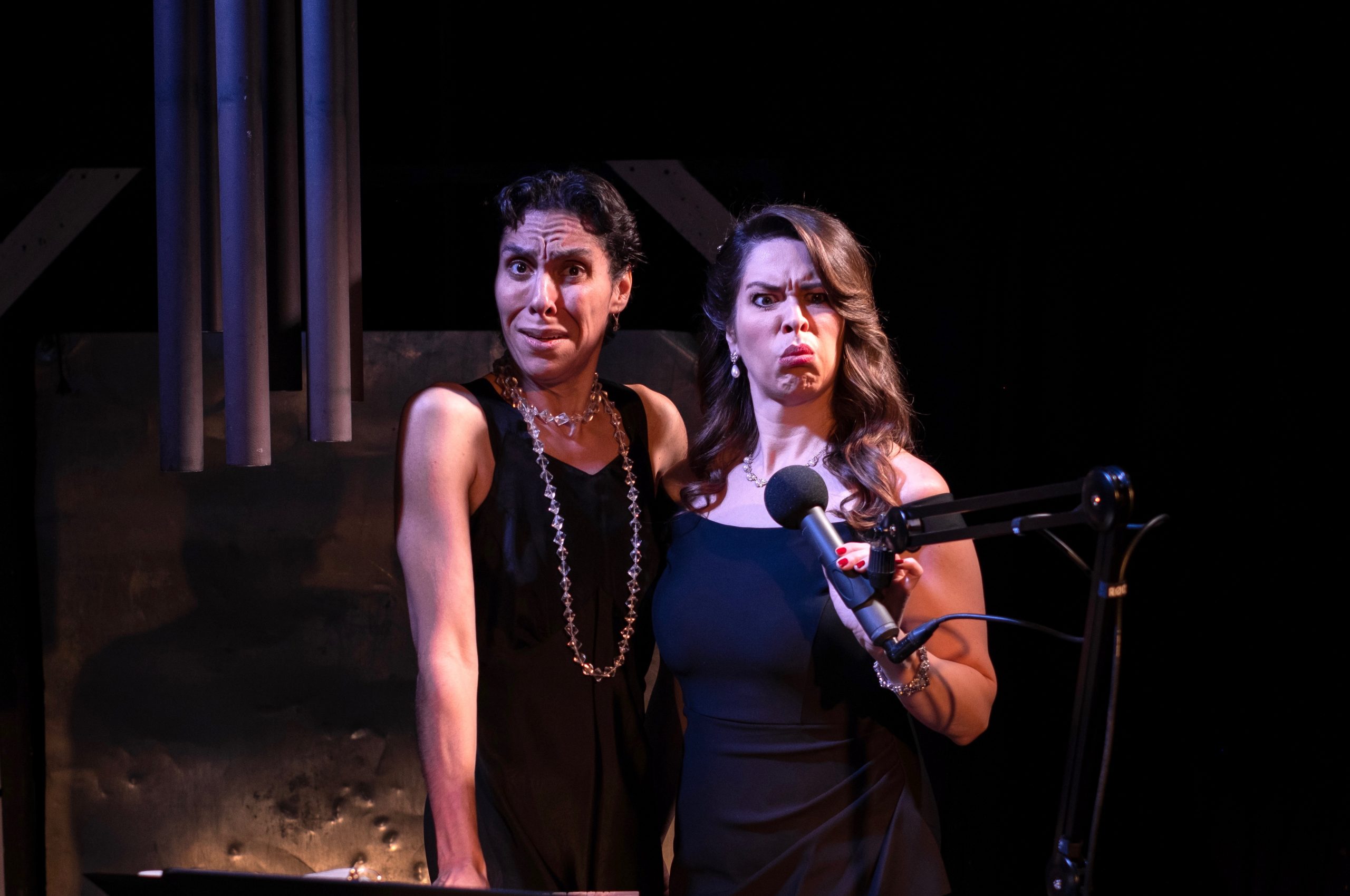 McCune and Slavinsky are a pair to be reckoned with.

Tami Dixon’s adaptation is ingeniously written. The acting is superb. The two women in the cast make a wonderful pair, with McCune’s cool elegance providing a counterpoint to Slavinsky’s magnetic energy. (Her facial expressions are priceless and her Pittsburghese is flawless. When, as Barb Cratchit, she proposes a Christmas dinner toast “to Mister Scrooge-off, tha fahnder of the feast,” this writer felt back at home in the blue-collar neighborhood of his youth.)

Other actors render the Pittsburgh working-class accent well, too. The only one never speaking it is Jamal as Scroogeoff, who blusters in a strained version of Brit-inflected upper Americanese. That’s a nice touch. It marks him off as feeling a cut above and lets the yinzer-speak become more than a local joke. Time and again throughout the play, that accent rang in my heart as the voice of the masses.

Yinzer Scrooged is staged as a “Midnight Radio” production, in the style of an old-time live radio play, another fortuitous aspect. With very little scenery-changing or costume-changing to get in the way, the cast of five can switch roles rapidly, using only the power of human performance to cast their spells.

And speaking of spells, how about the story that’s been adapted? Few are more spellbinding than Dickens’ A Christmas Carol. Call it sentimental humbug if you want. I dare you to read it, or to see any dramatic adaptation, without tearing up. In Western countries (and in a few that aren’t so Western), the story has attained the status of a cultural myth. It speaks to feelings deep inside everyone. You can’t resist it.

Although you can, of course, relish the story and then ignore its message. Some of us tend to do that. Maybe all of us, once in a while.

Too bad. But there’s hope!

Dixon’s Yinzer Scrooged is directed for Bricolage by Sam Turich. Music director is Deana Muro, with Camille Rolla substituting for the final show. Technical direction is by David JM Bielewicz, lighting by Jenna Ferree Robertson, and sound by Brendan Kepple. The stage manager is Daniel Burns.

Through Dec. 21 at 937 Liberty Ave., Cultural District. For tickets and further information, visit Bricolage on the web or call 412-471-0999 regarding group sales.