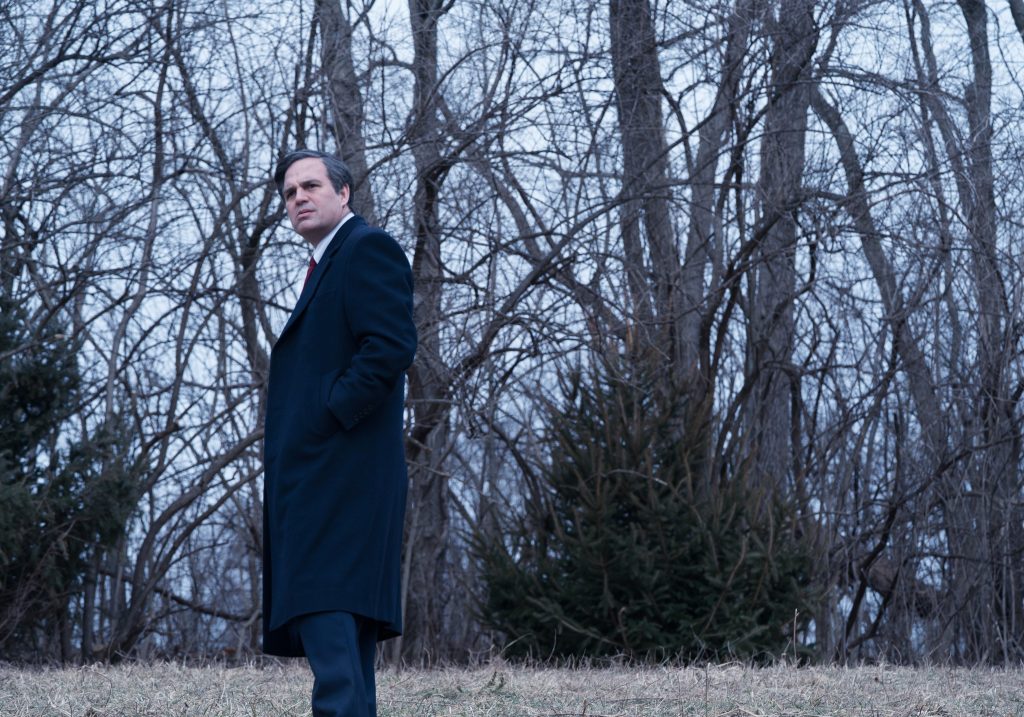 Attorney Robert Bilott (Mark Ruffalo) takes a look back on Wilbur Tennant’s farm where some very odd things have been occurring.

Sometimes the most horrific stories are the ones happening right under our noses—when we know something is wrong, but we can’t quite put our finger on it. Or when we definitely know something is awry, but can’t get anyone to listen to us. These are several of the basic premises in the film Dark Waters. The movie is based upon real life events.

Mark Ruffalo plays Robert Bilott, a rising corporate attorney. He had just made partner at a Cincinnati law firm whose main practice area is corporate defense. His wife Sarah Barlage Bilott (Anne Hathaway), gave up her job at the same firm to be a housewife and to have and raise their children. At the beginning of the film they are on the first steps of the ladder to upper mobility and financial success. 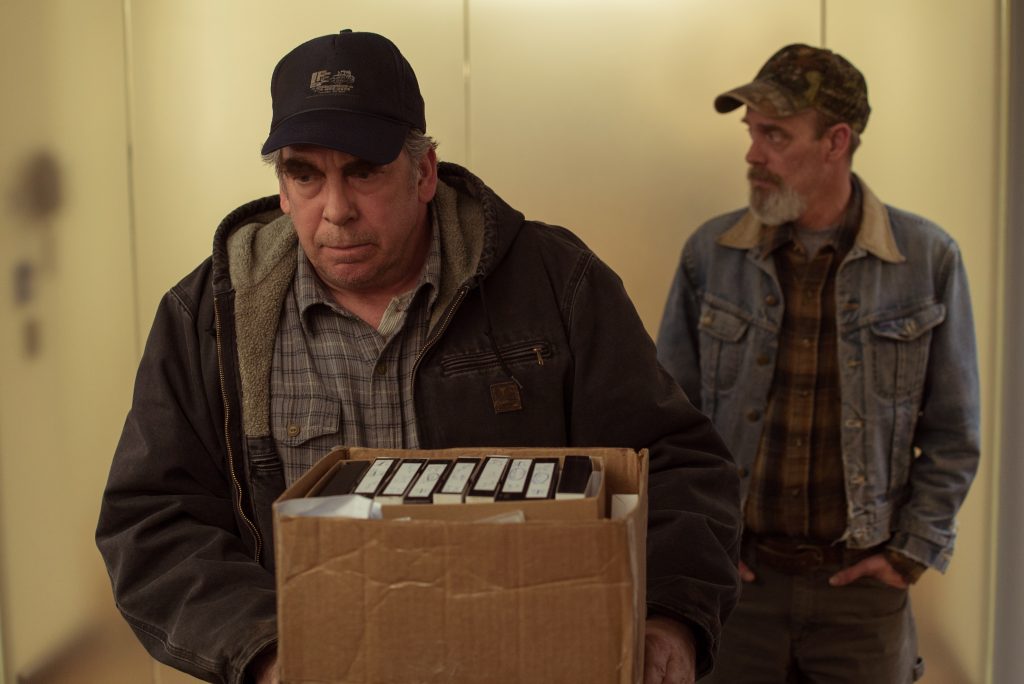 Bilott’s life course is forever altered when one day he is called out of a meeting with executives of the firm when a farmer, Wilbur Tennant (Bill Camp), and Jim Tennant (Jim Azelvandre) stop by the office to ask for his help. Wilbur Tennant says he knows Bilott’s grandmother from back home in Parkersburg, West Virginia. He says she has told him that her grandson “is a fancy environment lawyer down in Cincinnati.” He says that something is killing his cows and wants Bilott to look into it. Bilott says, “I am a corporate defense attorney. I defend chemical companies” To which Tennant replies, “Well now you can defend me.” Bilott says he will have his paralegal send him a list of attorneys who can help him. His conversation with the Tennants is starting to attract attention in the lobby and Bilott’s superior, Tom Terp (Tim Robbins), comes out to the lobby and calls him back into the meeting. Tennant and his friend leave angry and frustrated, but they have planted a seed in the conscious of a good man.

Bilott takes a trip to Parkersburg to see his grandmother and possibly Tennant. He surprises his “Grammers,” who makes him a good hot meal and they sit and talk. She confirms that she knows Tennant and gives him some more information.

Next, he stops by Tennant’s farmhouse. When they go outside they see a cow going in circles. The cow seems like it is mad. The cow stops circling and looks at the both of them. Tennant tells Bilott to get in the truck, Tennant then shoots and kills the cow with a rifle. This pains Tennant greatly. The cow seems to deflate somewhat when it lies dead on the ground. There’s other disturbing things to see on the farm. Tennant thinks that a stream, in which some of the rocks have turned white, is a source of unseen pollution. The cows drink from it. There is a DuPont chemical plant in the area. 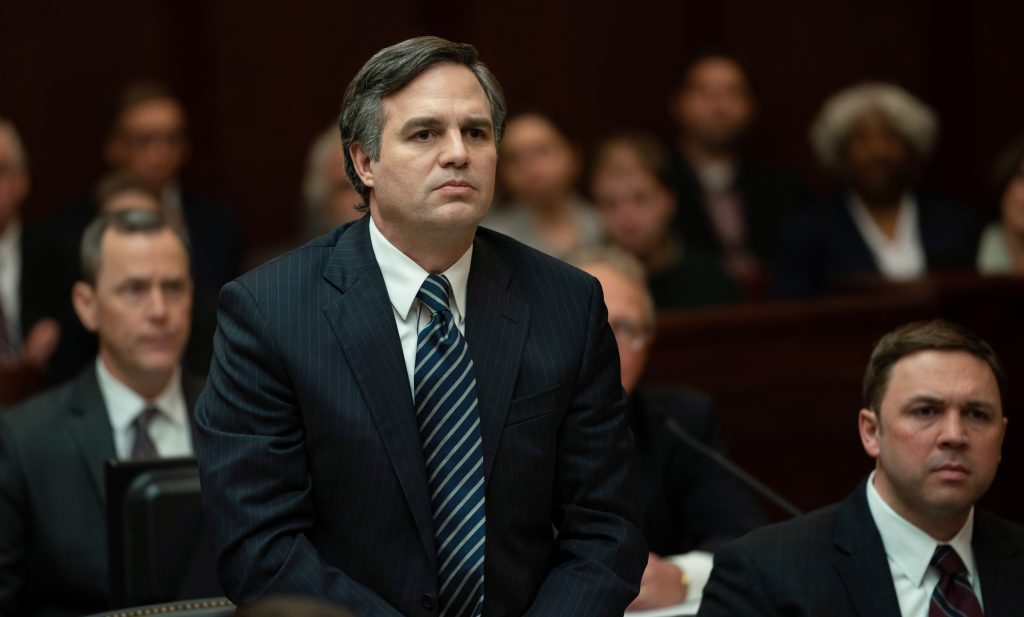 Bilott making the case for his plaintiffs in a court proceeding.

Bilott asks his boss, Terp, for permission to take this case against DuPont, who the firm would like to have as a client. Terp, somewhat reluctantly, agrees. Bilott knows DuPont’s main attorney Phil Donnelly (Victor Garber). They are both proceeding amicably during the legal discovery process, but when Bilott asks for more information, Donnelly blows his top and embarrasses Bilott at an industry event that they are both attending. Bilott’s wife and Terp are also at the event and witness the confrontation. The incident puts him on the hot seat with both his wife and boss.

As the case proceeds, the pressure builds on Bilott, as well as Tennant and his family and friends in Parkersburg. They are effectively shunned and threatened. It’s interesting to see how a seemingly benevolent employer is actually secretly poisoning many of its employees and townsfolk. Director Todd Haynes shows the power of a large corporate employer in a small town in several scenes, including one where the town’s trash receptacles and many sponsorship banners in the town have the DuPont name and logo on them. The film also demonstrates how government agencies can be the servant of large companies and not the public.

The movie is similar to a great detective story where the main character connects the dots and solves the mystery. Bilott made incredible sacrifices in the legal pursuit to hold DuPont Corporation accountable. He gives up time, money, and his health to help the powerless people who have been harmed by the powerful corporation. Just when Billott climbs one legal mountain, several more arise. Ruffalo is very captivating in his portrayal of Bilott, playing him in an understated, thoughtful manner. As a man with a strong moral compass and dogged determination. Ruffalo’s facial expressions and mannerisms were fantastic. 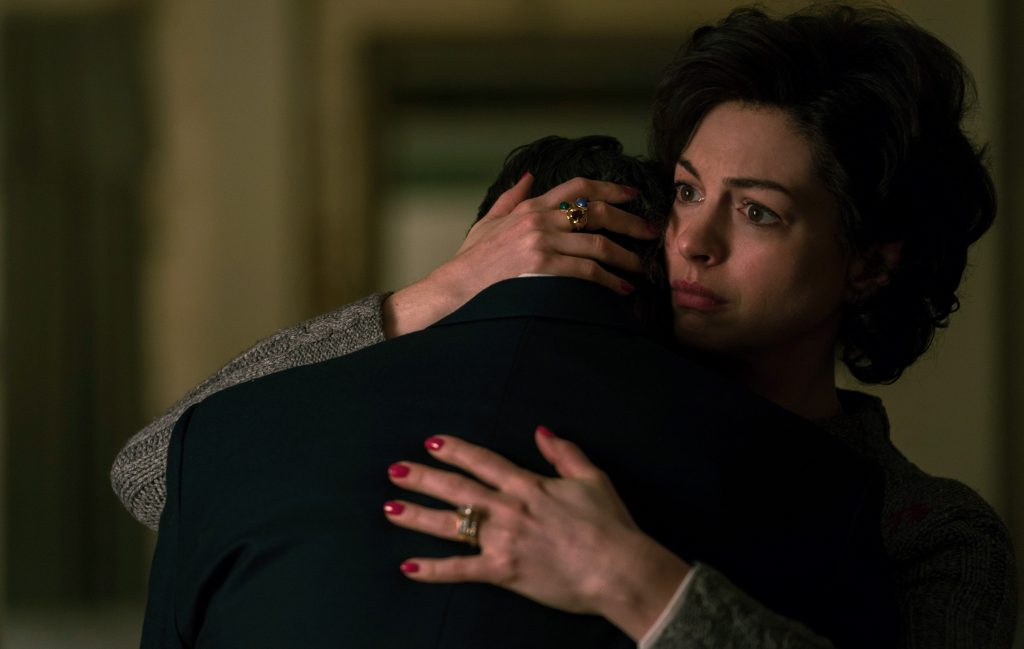 Luckily for Bilott, his wife Sarah, after forcing him to explain his strong desire to continue working on the case, is a loving and supportive spouse. Hathaway shines both in her moments of anger and love and support. Camp did a fine job in portraying Tennant with his frustration and distinctive, somewhat halting manner of speaking. Robbins does a good job of trying to support Bilott while running the corporate law firm. The whole cast did fine work including: Victor Garber (Phil Donnelly), Bill Pullman (Harry Dietzler), Kevin Crowley (Larry Winter), William Jackson Harper (James Ross), and Mare Winningham (Darlene Kiger).

Many scenes have a slow plodding pace, but this adds to the dramatic effect and gives it more of a real life feel. The screenplay was written by Matthew Michael Carnahan, Mario Correa, and Nathaniel Rich (wrote the magazine article on which the movie is based).

With the Environmental Protection Agency (EPA) effectively being severely hampered at this time and pollution restrictions being cut or loosened, it is a scary time environmentally. Hopefully, more people like Bilott will stand up and fight the corporate polluters in court. Dark Waters is a gripping and entertaining legal drama which shows that environmental victory is achievable and highly valuable even if it can take a long time.