Jordan Peele, who was once part of the cast of “Mad TV” and the comedy duo Key and Peele with Keegan-Michael Key, has recently been making his mark as a science fiction writer, director, and producer. His first films in this genre were Get Out (2017) and Us (2019) and he now returns with a new sci-fi movie, Nope.

The plot is centered on a brother and sister who have inherited Haywood Ranch, a historic Black horse ranch that has supplied horses to Hollywood for film and TV work for many years. Their father  was killed one day while working on the ranch from something that fell from the sky. His son, OJ Haywood, is played by Daniel Kaluuya, who also starred in Get Out. OJ was there when his dad was struck down and thought there were suspicious occurrences happening at that moment.

More suspicious activities start occurring at night in the fields and Haywood begins to investigate. Near the start of the film a TV report is heard that mentions hikers going missing. Another key player in this drama is Haywood’s sister Emerald (Keke Palmer). While Haywood is a stoic, hard working ranch owner struggling to keep the family business afloat, sister Emerald is a real live wire, usually seen distracting from whatever business is at hand. 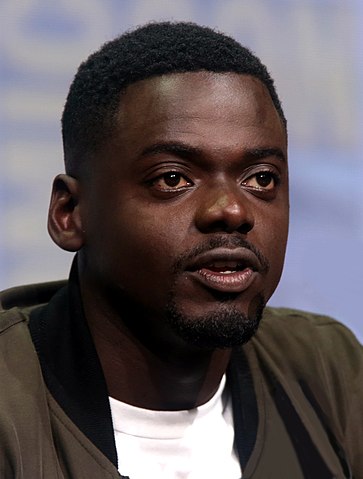 Daniel Kaluuya has starred in two Jordan Peele sci-fi films, ‘Get Out’ and ‘Nope.’ Seen here at the San Diego Comic-Con International in 2017. (Photo: Gage Skidmore and Wikipedia).

When they notice a cloud that doesn’t move and the flying saucer that hides in it, the brother and sister set about to capture a photo of it for their “Oprah moment” and a big payday in selling it. They enlist the help of Angel Torres (Brandon Perea), a tech salesman at Fry’s Electronics; and Antlers Holst (Michael Wincott), a noted, but irritable filmmaker to record the alien saucer. Much like the current inhabitants of Earth, the alien spaceship also has a major pollution problem.

Haywood has been selling some of his horses to the small western-themed amusement park, Jupiter’s Claim, that borders the ranch. It is owned by former child actor Ricky “Jupe” Park (Steven Yeun). He is the subject of a flashback subplot involving a chimpanzee attack on the sitcom set. This subplot, while intriguing, serves no major purpose in the film. This reviewer had to look online to see if I was missing some significance. The scenes were a major detour for low sci-fi payout.

The best science fiction works mess with viewer’s minds and perspectives to deliver terror. Unfortunately, Nope lacks those characteristics. Even though it is somewhat corny and hard to figure out exactly what certain plot elements are at times, Nope is entertaining. Nope also pokes fun at Hollywood and American culture while reminding the audience about the contributions of Black people in the film industry. The thing that was best about the film though is the rough, but also tender and loving sibling dynamic between OJ and Emerald.