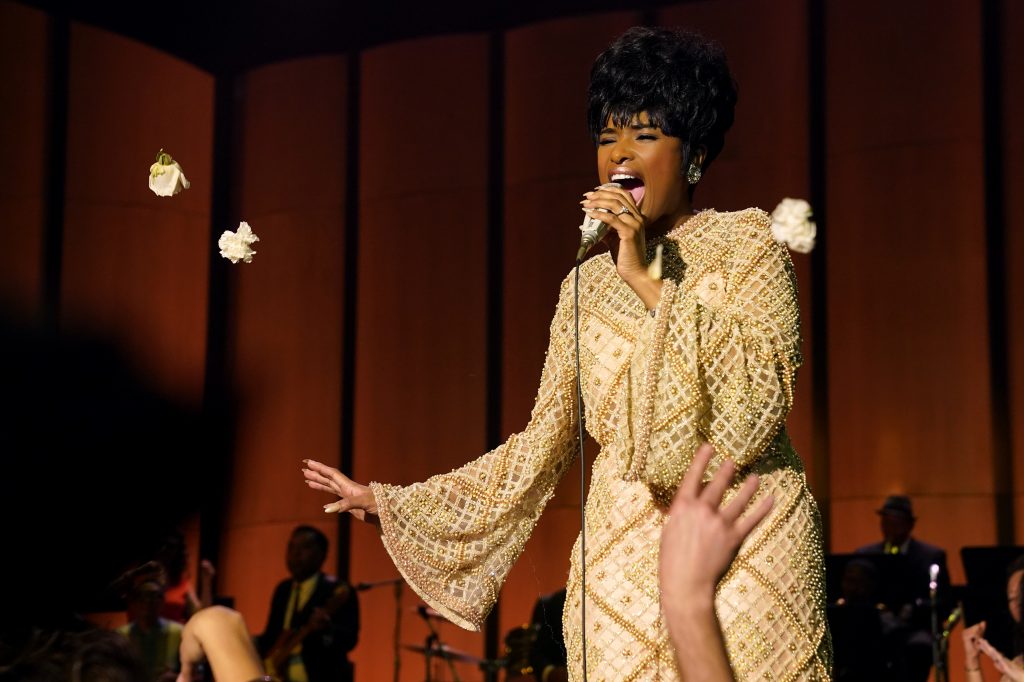 Jennifer Hudson was chosen to portray Aretha Franklin in the movie Respect, by Aretha Franklin herself, who years earlier told her she would portray her on the big screen. Franklin saw many similarities between Hudson and herself—both grew up in the church and both overcame terrible tragedies in their lives to become noted singers. In Franklin’s case, the Queen of Soul.

Hudson and Franklin were friends and would meet occasionally before Franklin’s death in 2018. Director Liesl Tommy saw the film as a superhero creation story and focused much on the film on the young Aretha and then on Franklin achieving worldwide success.

Franklin’s father, C.L. Franklin (Forest Whitaker) was a renowned preacher in Detroit who would also give sermon’s across the country. He was friends with Martin Luther King Jr. (Gilbert Glenn Brown) and many recording artists. C.L. Franklin was divorced from his wife, Aretha’s mom, Barbara Siggers Franklin (Audra McDonald).

One early scene in the movie is her father waking up young Aretha and asking her if she wanted to sing at a party he was hosting downstairs in their house. She said yes and slowly made her way downstairs. When she enters the party the camera follows her as she makes her way, saying hello to everyone. During the shot we get a slice of life into the other party goers and their conversations. When Franklin is singing, one of the guests at the party asks another guest how old she is? They reply, “She’s 10, but her voice is going on 30.”

Her dad’s parties were a source of joy for young Aretha, however it was also a source of devastation for her as well. One night at a party she was sexually assaulted by a man while she was sleeping in her room. Soon thereafter another crushing blow was delivered when her mom died. There was a period of time where she wouldn’t speak or tell anyone what was troubling her.

A source of comfort for her during this period, and other parts of her life, was Reverend Dr. James Cleveland, a Chicago pastor whom Franklin’s dad had mentor young Aretha on piano and gospel singing. Cleveland (Tituss Burgess) gave Aretha a valuable piece of advice in the film while they were sitting at the piano to get her through life’s rough patches, “Music will save your life.” And it did. Franklin used music as inspiration, and also as a coping mechanism to get her through disputes with her father and family, spousal abuse, discrimination, and the low points of her recording career. 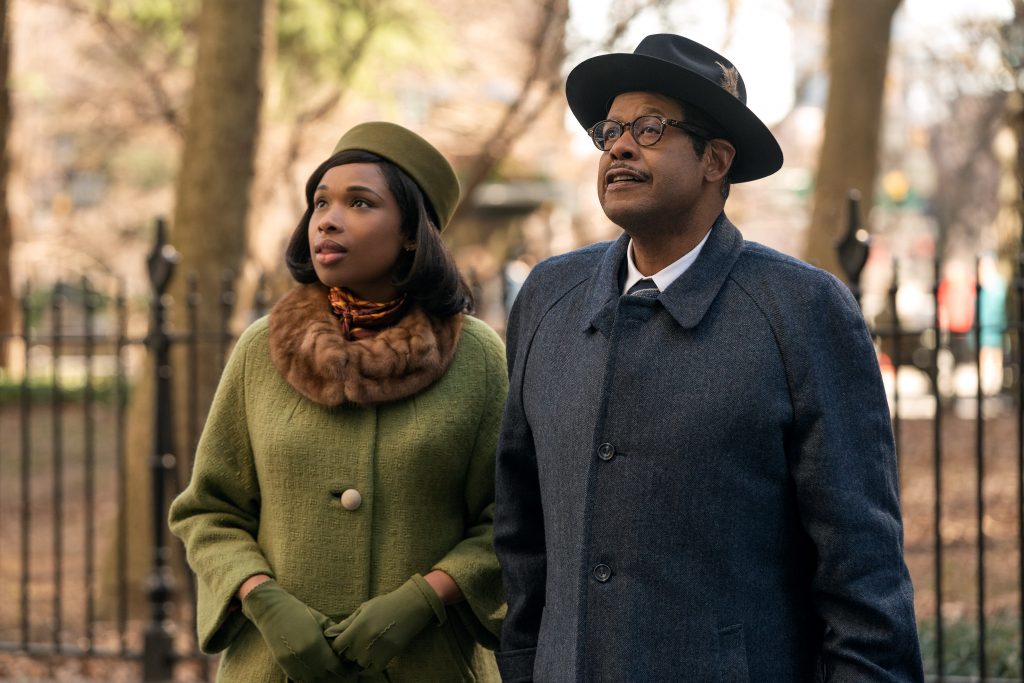 Franklin (Hudson) and her father (Forest Whitaker) soaking it all in before going into the record company.

The film showed her getting her start, with the help of her father, to make gospel recordings for J.V.B. Records. She enjoyed minor success, but sought to expand beyond gospel music. She went on to sign with Columbia Records, where she continued with middling success. In 1966 Franklin’s contract with Columbia was done and Columbia did not want to re-sign her. Jerry Wexler, of Atlantic Records, saw something in her and wanted to punch up her music. After signing, Wexler, artfully played by Marc Maron, told her he wanted her to record some songs at Fame Recording Studios in Muscle Shoals, Alabama, saying that there are talented young guys there that are really skilled at finding the groove. 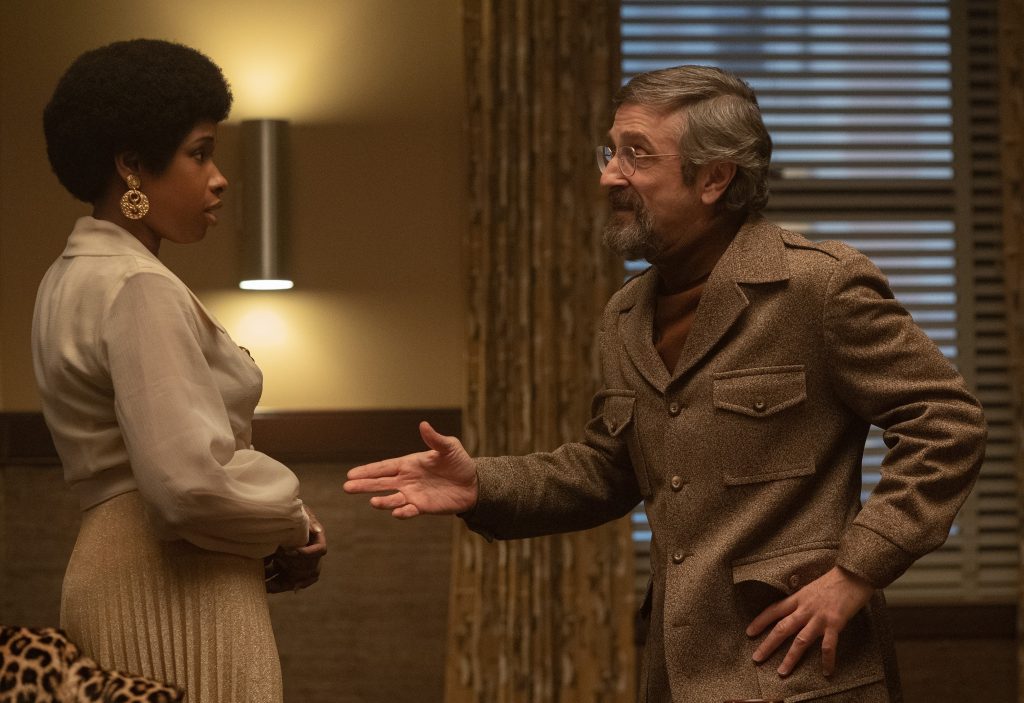 She travels to Alabama with her manager husband Ted White (Marlon Wayans), On their way to the studio they see black people picking cotton in the fields. At the studio White, after seeing all the musicians they are working with are white, asks, “Aren’t there any black musicians in town?” And says that he wants to go back to New York and record with his musicians there. Franklin holds him off and after a rough start she and the studio band start revising the song to great effect. However, a horn player gets a little too friendly with Franklin which further irritates White. Fame Studios owner, Rick Hall (Myk Watford) goes to their hotel room that night to tell them he has fired the horn player who made advances to Franklin. White starts a racial argument and then a fight. Franklin is starting to get a better picture of her husband’s dark side.

Legendary singer and friend Dinah Washington (Mary J. Blige) told Franklin, after her fourth album with no big hits, that she wasn’t going to make it big until she found the songs that moved her. 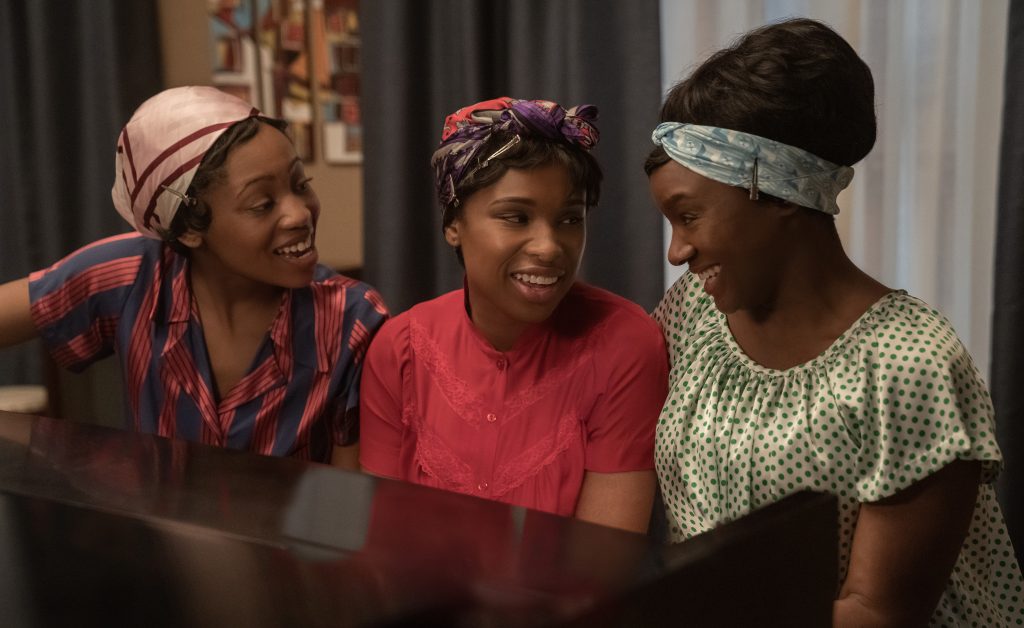 Another fantastic music-making segment in Respect is where Franklin is working out a new riff on the piano and singing “Respect” late at night. Otis Redding had written the song “Respect” previously. While working out the song, she starts performing it at a faster pace and more emphatically. Her sisters Erma (Saycon Sengbloh) and Carolyn (Hailey Kilgore) were awakened and helped create new background vocals that made the song a distinctive hit and the song of a lifetime for Franklin.

Hudson did a splendid job portraying Aretha Franklin. It’s often very hard playing someone who’s widely known. Hudson, in interviews, said she does not have exactly the same singing voice as Franklin and did not try to completely imitate her voice. Hudson sang all the Franklin songs in the film. Skye Dakota Turner also did a fantastic job in her role as young Aretha. In Respect there is a hard edge dynamic that is ever evolving between Franklin and her father. Whitaker excels in the role’s complexity. Another person in the film that is the glue that holds everything together is Franklin’s grandmother, Mama Franklin (Kimberly Scott). A major highlight of the film is seeing Franklin’s (and others) outfits running the gambit during the early 60’s to mid 70’s. Respect’s costume designer was Clint Ramos.

Respect is a fun and emotional journey through the obstacles that Franklin overcame to reach the pinnacle of her success.