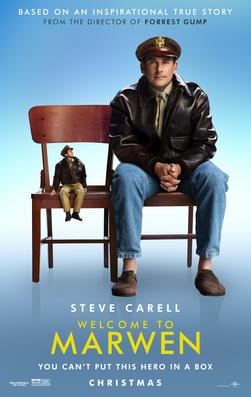 Welcome to Marwen is based on the true life story of a talented illustrator, Mark Hogancamp, who lives in Kingston, New York. He also is a straight man who likes to occasionally wear women’s shoes. When that fact comes to light late one night in a town bar several Nazi near-do-wells confront Hogancamp (Steve Carell) about that fact. He replies that at least he doesn’t wear the rest of a woman’s outfit. The group doesn’t particularly like his response and see him in the parking lot after he leaves. They then beat him within an inch of his life and leave him for dead. A bartender leaving for the night sees what she thinks is a bag of garbage lying in the road, but realizes it is Hogancamp.

Hogancamp’s injuries have caused him permanent memory loss. There are signs in his trailer home reminding him of various things to do and not do including turn off the lights and only take one of a certain pill per day. He also has a book filled with memories and photographs of his pre-injury life so that he has some sense of who he is. His injuries damaged his illustrating hand so badly that he could no longer use it for that purpose.

To compensate for his hand injury and to cope with the post-trumatic stress from the beating, he developed a fictional Belgium town called Marwen. In his yard he built a scale model World War II era village with individual buildings.

The town is populated by action figure dolls he buys at the town’s hobby shop. There’s Hogancamp’s alter ego, the fighter pilot, Captain Mark “Hogie” Hogancamp, scantily clad female fighters who represent actual women in Hogancamp’s life, and a green haired witch named Deja Thoris (Diane Kruger). He dresses and makes up the action figures, and yes even their footwear. The women of Marwen are composed of: Roberta, a kind friend who works at the hobby shop (Merritt Wever); GI Julie, a friend from rehab (Janelle Monáe); Caralala, a coworker friend at the bar that Hogancamp works and who in Marwen is Eliza Gonzalez (Eiza González), and Anna, his occasionally visiting Russian-born caretaker (Gwendoline Christie).

By inserting himself in the fictional Marwen it helps Hogancamp process the stress of what happened to him and also aids him in relating to current circumstances. He takes artistic photographs of various Marwen scenes with the action figurines doing different things. In his mind Hogancamp sees the figurines as living individuals interacting and speaking in various situations. Director Robert Zemekis (who also wrote the screenplay with Caroline Thompson)  gives the audience insights into Hogancamp’s imaginary pursuits in Marwin through motion/emotion capture technology and CG in the animated sequences.

It’s quite a site to see Cap’n Hogie and the women in the animated scenes all driving together in a World War II Army Jeep with GI Julie (Monáe) “manning” the mounted machine gun in the back of the vehicle. There’s also an ever-present group of Nazi soldiers whose patrols brings them into contact and combat with Cap’n Hogie and his fighting females. It’s fun to see the women, dressed in their individual outfits and Cap’n Hogie in firefights with the German soldiers.

Hogancamp enjoys the company of the women in both his real and imagined life. Then one day a new neighbor moves in across the street. It’s Nicol with no “e” at the end. She is played by the wonderfully charismatic Leslie Mann. It is as if Glinda the Good Witch moved right across the street from him. She is very kind and supportive, even admiring Hogancamp’s small village and the figurines. Nicol gives him hope for a better future and the courage to face his attackers in their court trial, although not without a few stumbles along the way.

The animated Marwen scenes are necessary to the film to show that part of Hogancamp’s life. They represent his response to bad and hurtful people, his personality, and sexuality. He leaves the shirt unbuttoned on his hobby store friend figurine, Roberta. She happens to see this and playfully calls him out on it. If any female character gets too close to Cap’n Hogie then Deja Thoris has them killed by a Nazi so she can still have Hogie all to herself. When the action figures die and hit the ground they then make the sound one would expect of a doll hitting a hard surface, kind of plastic thud-like noise.

The animated sequences are fascinating to watch. They could have made an entire animated movie out of them. To create a realistic film of Hogancamp’s life it is necessary to have this aspect portrayed. Zemekis does a good job of that. However, these scenes seem to have too much focus on them. They go on a little too long and some of the dialogue is a little over the top. The film would have been better served to focus more on the real life aspects of the story and the talents of Carell and Mann. They are two master actors who I would have liked to see more of in the real life roles.

There’s a subtle scene of Carell walking on the front walk to Nicol’s porch with a small limp and a slow amble. Carell is also careful to cut his laugh short before it goes into his trademark long laugh of “The Office” TV show especially after he used to say “That’s what she said.” Carell is especially brilliant in showing the trials and tribulations of someone suffering from PTSD. Mann played her limited role well as did the other actors.

Zemeckis and crew should be recognized for their efforts to serve the two masters of fictional life and reality in this film.Even though Welcome to Marwen‘s real and fictional story ratio was a little unbalanced it is still a good movie to see. If you’re an animated action movie buff there’s something for you, and if you’re more into heartwarming dramas that part is there as well too. And there’s a good twist at the end.