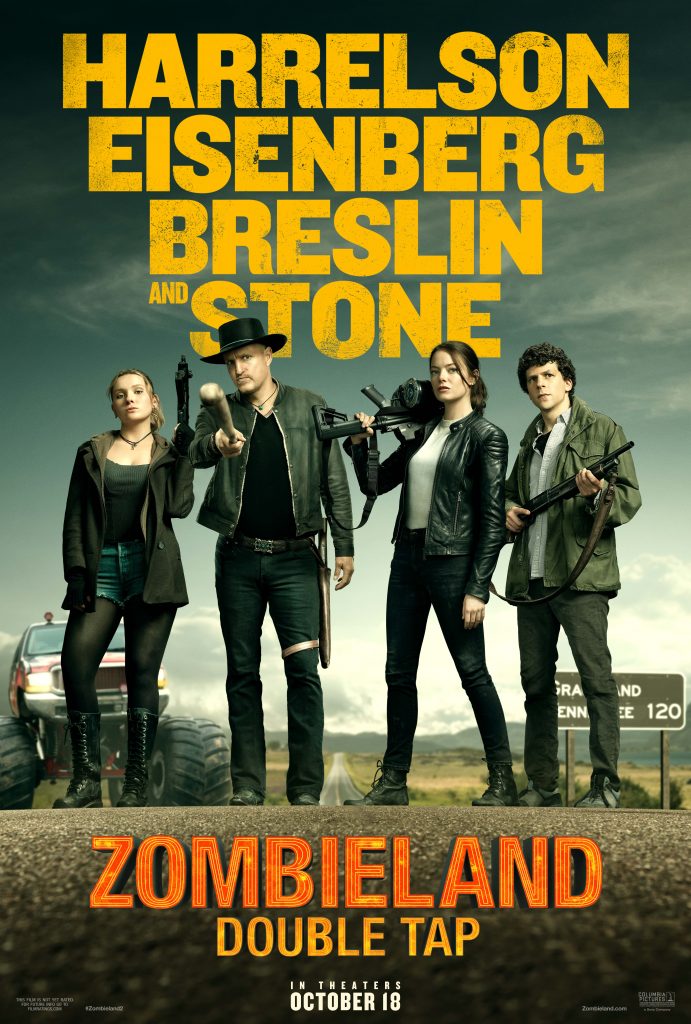 Looking for a highly entertaining zombie flick for the Halloween season? Then look no further than the zomedy, Zombieland Double Tap. Woody Harrelson, Jesse Eisenberg, Emma Stone, and Abigail Breslin are the main players in the stellar cast and are known respectively by their nicknames: Tallahassee, Columbus, Wichita, and Little Rock. They are zombie fighters by necessity and live together as a family unit. Only Wichita and Little Rock are related—they are sisters.

This followup to 2009’s Zombieland, has a slow motion zombie killing scene in the opening sequence. It takes place on the overgrown lawn of the White House. As a rock track plays, the four take on the zombies with various firearms. While Harrelson as Tallahassee, a hard drinking, country character can easily be seen as a zombie killer, it’s interesting to see Eisenberg, Stone, and Breslin, methodically carry out the task.

The family moves into the White House and leads a fairly “normal” life, playing dodge ball, Twister,  and riding scooters in its hallways. It’s visually interesting to see the White House’s decor bordering on its past grand formal design and the kitschy touches of a true family home. Tallahassee gets into the spirit too, modifying the presidential limo into a “Mad Max”-like vehicle with a set of cattle horns on the hood, a machine gun on the roof, and Dale Earnhardt’s number 3, painted on the driver’s door.

Tallahassee even initiates a Christmas Day family celebration (in November) when he dresses up in a red suit complete with a white beard made of cotton balls. He gives Little Rock a present, a historic handgun, which he has wrapped in the white house portrait of President Taft. He tells the others, “Taft was a big man. If anyone needs to wrap anything there’s more of the portrait left.” In a break from the classic White House Christmas trees of the past, Tallahassee’s evergreen utilizes a different kind of shiny ornaments—empty aluminum beer cans.

Columbus and Wichita are involved romantically and live in the Lincoln Bedroom. They have covered the eyes of the portrait of Abraham Lincoln because it makes Wichita feel creepy if he is staring at them while they are making love. Columbus proposes to Wichita with the Hope Diamond ring. She is hesitant and puts him off.

Little Rock bemoans that there is no one around that is her age and is sick of Tallahassee treating her like a child. She takes off with newcomer Berkley (Avan Jogia) for Graceland in Memphis, Tennessee, soon after meeting him. They take Tallahassee’s fighting limo. Soon thereafter, Wichita takes off to find her sister, just leaving behind a brief farewell note behind for Columbus.

In a shopping trip to a deserted mall (except for some zombies). Columbus is choosing some scented candles when a young woman dressed in a pink track suit startles him. The young woman is named Madison (Zoey Deutsch) and has been living in the mall’s Pinkberry frozen yogurt store’s freezer. Madison is, shall we say, not the sharpest knife in the drawer. She pressures Eisenberg into a relationship. Then Wichita returns for guns and ammo, discovering Columbus and Madison are a couple. There’s some fun, back and forth dialog between Columbus and Wichita over this new development.

All of them set off to find Little Rock. The only vehicle they have at the moment is an older Pontiac minivan. Their quest to find another vehicle provides for some good comic relief. Along the way they discover there are new faster, smarter zombies that have evolved, whom they call T-800s after the character in the Terminator movies. They also meet Nevada (Roasrio Dawson) who runs an Elvis Pressley themed motel, and becomes a love interest to Tallahassee. There’s a “Seinfeld”-esque bizarro world moment at the motel when Nevada’s former boyfriend, Albuquerque (Luke Wilson) and his sidekick Flagstaff (Thomas Middleditch) confront Tallahassee, Columbus, and Emma Stone at the Elvis motel.

The Tower of Babylon

They discover that Little Rock and Berkley have gone to a post-apocalyptic high-rise hippie commune called Babylon (which Madison pronounces, “baby lion”). No guns are allowed at Babylon causing some initial hesitation from Tallahassee. They enter the commune and that sets up Zombieland Double Tap’s climactic ending.

It was a pleasure watching Harrelson, Eisenberg, Stone, Breslin, Dawson, Deutch, and Jogia play their distinctively different characters to perfection. The script was lively and very funny. Zombieland Double Tap was directed by Ruben Fleischer and written by Dave Callaham, Rhett Reese, and Paul Wernick.

There were other fun features of the film including Columbus’ rules. They included: cardio, double tap (shoot a zombie with at least two bullets), wear your seat belts, travel light, and ask for help. Another highlight were the Zombie Kill snippets of other survivors around the world and their innovative ways of executing the undead. Bill Murray makes an appearance midway through the ending credits and again after they have all rolled. Also a famous actor sings the Elvis song during the closing credits. Zombieland Double Tap is a fun film that excels on several levels and makes some real magic.