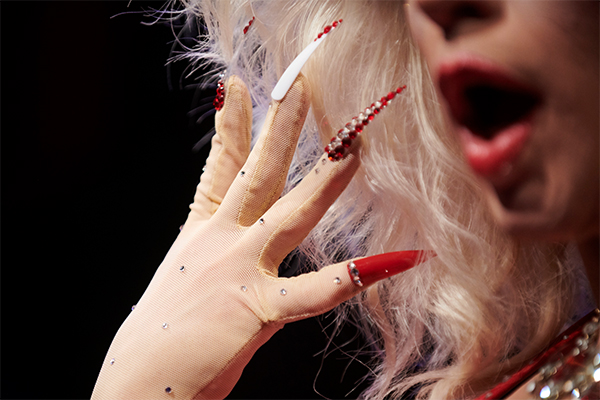 Great ideas have the feeling of inevitability. And few things seem greater or more inevitable than a holiday-themed musical played in drag. Claws Out: The Holiday Drag Musical—created by a team of Pittsburgh all-stars, and bearing a title that plays mercilessly upon the name of a certain Claus—is a new online production. Produced by City Theatre, the (pre-recorded) streaming show was written by Monteze Freeland and Shua Potter, with music by Douglas Levine. Better yet, all three perform, including composer/conductor Levine who is usually closeted behind the scenes. City’s Marc Masterson co-directed along with Freeland, and as for the plot: Such a thing is not strictly required in productions of this nature, but Claws Out has one. It involves Mrs. Rachel Claus, whose makeover of the North Pole is threatened by a clause in her contract that allows a hussy named Roberta to take over the makeover. Carole Claus and Blitzen figure into the story as well, and so does Devontay. All parts are played with flamboyant musical mirth.

Claws Out was filmed at WQED and Steeltown Entertainment using strict Covid-19 precautions. Buy a digital ticket at a price of your choice, as long as it’s $15 or more per household, and anyone with whom you cohabit can watch any time, now through January 10. Tickets are also available for live, interactive virtual events that will be streamed in conjunction with the show on December 5, 8, 12, and 19 at $50 per, except for the one on the 8th which is pay what you want, period. Mrs. Claus reminds us that drag is for everyone. Whether you’re naughty or nice. (M.V.)