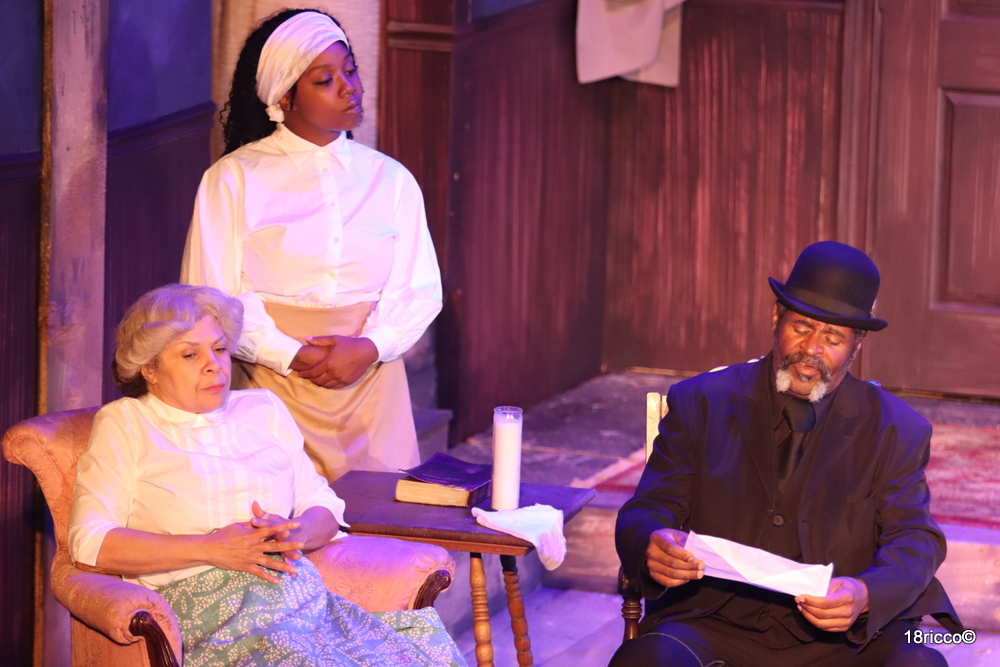 ‘Gem of the Ocean’ is August Wilson’s earliest set plays in his Pittsburgh Cycle. Seen here in the Pittsburgh Playwrights Theater Company production is (L to R) Chrystal Bates as Aunt Ester, Candace Walker as Black Mary. and Wali Jamal as Caesar Wilks.

1) If you are new to August Wilson, jump on this month’s chance to see Gem of the Ocean. It is the opening play of his Pittsburgh Cycle—10 plays, each set in a different decade of the 20th century—and, along with the classic Wilson touches, Gem has a deeper dimension: supernatural spirituality. The year is 1904. We are at the Hill District home of Aunt Ester, who in other plays is a presence but never seen. A former slave, she has aged well and learned much in her 285 years. One day a visitor arrives, a new man in town, named Citizen Barlow. He bears a burden of guilt and wants Aunt Ester to wash his soul. This, she can do. The ritual is remarkable and so are the events that surround it. Pittsburgh Playwrights Theatre Company, long known for interpreting Wilson’s work, presents Gem of the Ocean with Chrystal Bates as Aunt Ester, Jonathan Berry as Citizen, Kevin Brown as Solly Two Kings, and Wali Jamal as Caesar. 7:30 p.m. Performances continue through September 22. The play is performed outdoors at 1839 Wylie Ave., Hill District. (MV)

2) You’ll want to plan ahead for Pork & Beans. This Texas-inspired BBQ and smokehouse offers “a daily, rotating selection of house-smoked meats available by the pound on a first-come, first-serve basis.” These meats run the gamut of brisket and pork shoulders to salt-and-pepper chicken. It’s menu also includes daily specials, like meatloaf on Mondays and baby back ribs on Tuesdays. Luckily, the restaurant takes reservations. The menu also includes appetizers, wings, sides, sandwiches, but only two salads. (Definitely a place Ron Swanson would love.) Although the specials average $25, the sandwiches hover around $14. There’s also an impressive list of craft and imported beers on tap plus wine. This establishment additionally serves lunch 11:30 a.m. to 2 p.m. Tuesday to Saturday. Pork & Beans is part of the Richard DeShantz Restaurant Group, which owns other Cultural District eateries such as Butcher and the Rye and täko. Patrons can dine in, deliver, or plan a catered buffet for private events. 136 6th St., Cultural District. (CM)

3) The Pitt Panthers football team open their season this evening at Heinz Field against the Virginia Cavaliers. The match up also marks the first game of conference play in the ACC. The Panthers won the ACC Coastal Division in 2018 and will attempt to repeat as division leader this year. 7:30 p.m. 100 Art Rooney Ave., North Shore.