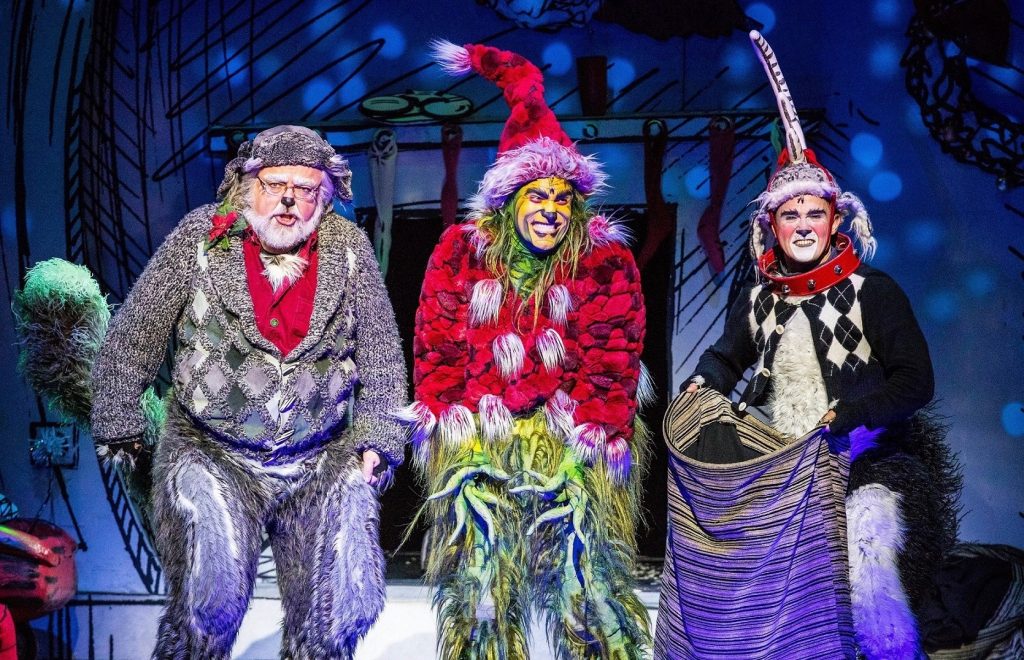 The touring production of ‘Dr. Seuss’ How The Grinch Stole Christmas! The Musical’ starts its Pittsburgh Run tonight.

1) You don’t have to wait for Benedict to see The Grinch. The new animated movie of How The Grinch Stole Christmas!, with Benedict Cumberbatch voicing the title role, has had its release date pushed back to next year’s holiday season. However, high-quality Grinchiness is still available. The national touring production of Dr. Seuss’ How The Grinch Stole Christmas! The Musical is booked into Pittsburgh for a five-day, eight-show run. Get tickets promptly because seats are going fast. This musical version of the Dr. Seuss story has been critically acclaimed and audience-approved in cities from Minneapolis (where it premiered in 1994) to New York (Broadway debut, 2006) to Albuquerque. We may not have Albuquerque’s sunny skies in December, but we have a pretty nice venue for the occasion: Heinz Hall. 7 p.m. Performances through December 24. 600 Penn Ave., Cultural District.

2) Donnie Iris—a.k.a. King Cool, a distinguished member of the region’s rock royalty—will be at Jergel’s Rhythm Grille with longtime bandmate Mark Avsec for a most exceptional event: a book signing. Iris and his popular band of the 1980s are the subjects of a new biography, The Story of Donnie Iris and The Cruisers, by rock journalist D.X. Ferris. The book’s official release is slated for 2018 but advance copies are coming hot off the press to Jergel’s. Iris, born in New Castle and raised in Ellwood City, first broke onto the national scene with a group called the Jaggerz (named, of course, after those things that grow on jaggerbushes). Their 1970 hit “The Rapper” reached no. 2 on the Billboard Pop Singles chart. Later that decade, Iris and Avsec met through the Ohio-based band Wild Cherry, then teamed up to form The Cruisers. National-charting hits by The Cruisers in the ‘80s included singles “Ah Leah” and “Love Is Like a Rock” and albums Back on the Streets and King Cool. The band has re-united and/or re-formed at various times, with further releases including the 2006 album Ellwood City. The book signing—with Iris, Avsec, and author Ferris all present to chat and mingle—is 4:30 – 6:30 p.m., followed by an onstage interview led by comedian/radio personality Jim Krenn at 7 p.m. No cover charge. 285 Northgate Dr., Warrendale. (RH, MV)

3) Pittsburgh Winery and the Pittsburgh Cultural Trust are teaming up for Home for the Holidays, a rock, blues, and soul entertainment extravaganza featuring local artists performing holiday classics and other top songs. Trio+ and The Steeltown Horns will accompany the Home for the Holidays performers, featuring (in alphabetical order): Margot Bingham (from Boardwalk Empire Band), Scott Blasey (from The Clarks), Clinton Clegg (from The Commonheart), Bill Deasy (from The Gathering Field), Kelsey Friday (from Brownie Mary), Kevin Garrett, Joy Ike, and Jimbo Jackson (from Jimbo and the Soupbones), and Phil MacDowell (from Buzz Poets) with Florraine Darlin, Billy Price, and Lyndsey Smith (from Soul Distribution). Tim Gaber, owner of Pittsburgh Winery and a member of The Buzz Poets, said, “This production is an amazing musical and emotional journey that gives the audience all the feels. Home for the Holidays showcases the incredible level of talent our city has given birth to, featuring vocalists, songwriters, and musicians doing unique renditions of holiday classics along with their own original hit songs.” Several guest radio personalities will emcee throughout the evening. At the event, nonperishable food (no glass jars or bottles) and household items will be collected for donation to the Greater Pittsburgh Community Food Bank. A VIP ticket is also available which includes a pre-show wine tasting by Pittsburgh Winery and a one-year Partners membership in the Pittsburgh Cultural Trust. 7:30 p.m. Benedum Center, 237 7th Ave., Cultural District. (RH)