1) Grizzly Bear and Spoon respectively wrote some of the most recognizable rock hooks of the past 15 or so years. You doubt? Ask the barista what song is playing the next time a catchy riff starts to resound through your local coffee shop, and don’t be surprised if it’s “Two Weeks” by Grizzly Bear or “The Way We Get By” by Spoon. The former song comes from 2009’s Veckatimest. The latter comes from 2002’s Kill the Moonlight. Both albums are solid entry points to each band’s respective discography. Grizzly Bear is from Brooklyn, New York City. The quartet, which began as a solo project of Ed Droste, rose from the New York City rock revival of the early aughts. Painted Ruins, released in 2017, is the group’s latest album. Spoon originated in Austin, Texas, in 1993. Their latest album is 2017’s Hot Thoughts. The bands co-headline an outdoor concert at Stage AE. Kaitlyn Aurelia Smith opens. Doors open 6 p.m. 400 North Shore Dr., North Shore. (CM)

2) Why do people have an affinity for tragic accidents and disasters turned into popular art? This is Entertainment Central, not Social Psychology Central, so we won’t go there. We simply inform you that Pittsburgh CLO, the city’s premier musical theater company, is presenting Titanic. The show swept the big three Tony Awards for 1997: Best Musical, Best Score (by Maury Yeston), and Best Book (by Peter Stone). Better yet, Titanic even earns social-psychology credits by capturing many details and ironies that have made the 1912 sinking of that ship an endless subject of grim fascination. Unlike James Cameron’s movie, built around a fictional romance, the stage musical focuses on historical facts. The RMS Titanic, the world’s largest ship at the time, was hailed as a miracle of human achievement—yet it was undone by human errors and misjudgments that could’ve easily been avoided. The drama is conveyed in musical numbers ranging from “What a Remarkable Age This Is” to “The Blame” and “The Foundering.” 8 p.m. Performance continue through July 1. CLO performs Titanic at Benedum Center, 237 7th Ave., Cultural District. (MV) 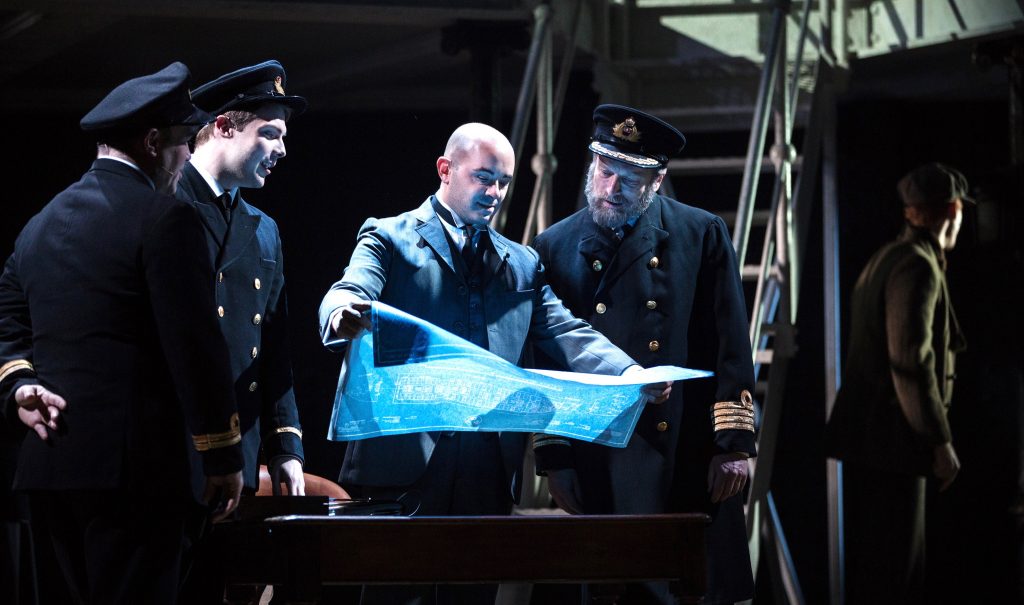 There won’t be smooth sailing for these gents: that is a blueprint of the RMS Titanic. Pittsburgh CLO presents the musical ‘Titanic’ as part of a June theater lineup that includes happier endings as well. Photo: Cylla von Tiedemann.

3) Our battlin’ Bucs play the second game of a four-game home series tonight against the Arizona Diamondbacks in a 7:05 p.m. game. After that series the Pirates then are off to play the Mets on Monday. PNC Park, 115 Federal St., North Shore.