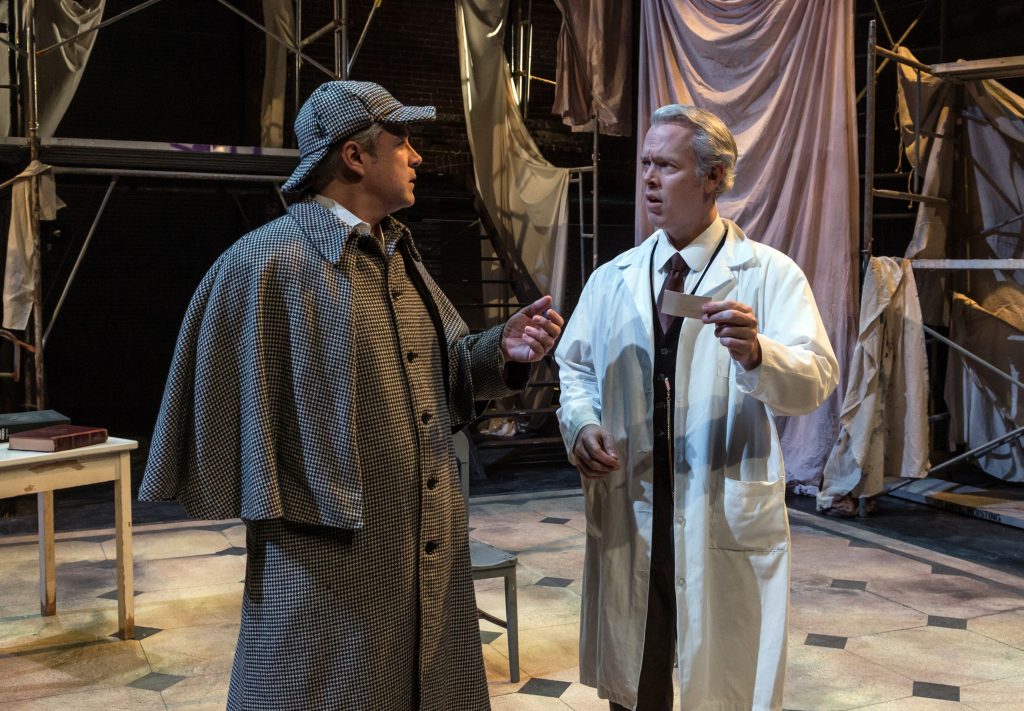 1) Does Sherlock Holmes live or are these guys faking it? Holmes and Watson, a new play by Sherlock re-inventor Jeffrey Hatcher, is set after the detective’s disappearance and presumed death in Arthur Conan Doyle’s “The Final Problem.” Sherlock impostors have turned up and been easily exposed. Still, Dr. Watson visits a spooky insane asylum to investigate a strange report: There are three new patients claiming to be Holmes. The plot calls to mind a true story, The Three Christs of Ypsilanti, a 1964 book about three men in a Michigan mental hospital, each insisting he was Jesus. Holmes and Watson has a credibility problem—wouldn’t Watson know the real Holmes instantly?—but critics in other cities have advised audiences to ignore the problem and enjoy the play’s nuanced mysteries and surprise ending. Kinetic Theatre kicks off its 2018 season with Holmes and Watson. Kinetic artistic director Andrew Paul has mounted previous Sherlock plays and is joined again for this one by actor David Whalen. 8 p.m. Runs through March 4. At the New Hazlett Theater, 6 Allegheny Square East, North Side. (MV)

2) Jessica Lea Mayfield makes a stop at Club Cafe on her latest tour. Mayfield, is a singer/songwriter whose music occupies a niche between country and rock with a slightly downbeat vocal style, which gives her a trademark sound. She’s a neighbor from our northwest, hailing from Kent, Ohio. Special guest is Mal Blum and the Blums.  8 p.m. 56 – 58 S. 12th St., South Side. (RH)

3) Sooner or later it was bound to happen, Larry Richert hosting his own variety show that is. The “Larry Richert Variety Hour” debuts tonight at Jergel’s Rhythm Grill in Warrendale. And it’s going to be “A really big show” with Pittsburgh radio legend/podcaster/comedian Jim Krenn, magician Lee Terbosic, singer Casey Hanner, and even a visit by Pennsylvania’s favorite furry rodent, Punxsutawney Phil! Richert knows everybody! Executive Producer Carl Greffenstete presents… with All-Star cast Tori Brady, Brian “Monty” Montgomery, and Steve Hansen! Richert is a sports announcer and media personality. He does the morning news on KDKA AM, performs the voiceover duties on NFL Films Steelers’ season highlight films, is the public address announcer for Steeler games, and is also pre-game host and sideline reporter for Pitt Panther Football radio network. We’re glad that Richert has found time in his busy schedule to now host a variety show. He is one of the hardest working people in the Pittsburgh news and entertainment industry! 8 p.m. 285 Northgate Dr.