1) Your Led Zeppelin fix this month at the Roxian Theatre with Jason Bonham’s Led Zeppelin Evening. Jason Bonham, son of the late Led Zeppelin drummer John Bonham, has masterfully recreated his father’s band’s music with his own band. He (and Ann and Nancy Wilson of Heart) gave an amazing performance of “Stairway to Heaven” when the Kennedy Center honored Led Zeppelin in 2012. 8 p.m. 425 Chartiers Ave., McKees Rocks.

2) Tonight’s 59th Annual Light Up Night is the official kick off to Pittsburgh’s holiday season—even if some national retailers started the holiday season the day after Halloween. Highlights include several tree-lighting ceremonies, ice skating at PPG Plaza, Fireworks Finale (9:30 p.m.), and an appearance by Santa. There’s also top-notch local entertainment on three stages: the Main Stage; New Music Stage, and Jazzmasters stage. Local groups performing are Joe Grushecky and The Houserockers, The Nox Boys, Beauty Slap, and MCG Jazz Presents: The Music of Fred Rogers. And Adam Lambert, who toured as the lead singer of Queen earlier this year, is the musical headliner. Merriment and goodwill will spontaneously occur all over the Golden Triangle. This is a holiday celebration not to miss. For a complete schedule, visit Downtown Pittsburgh for the Holidays. 6 – 10 p.m., Downtown. 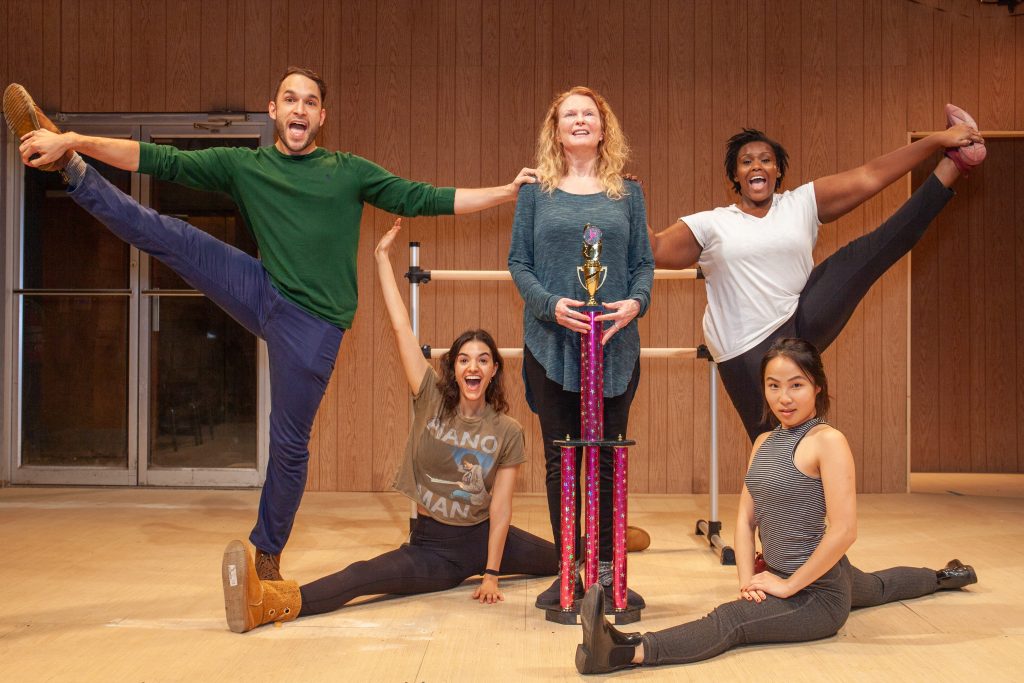 barebones Productions is staging Clare Barron’s ‘Dance Nation,’ which was a finalist for this year’s Pulitzer Prize for Drama. (photo: Brittany Spinelli)

3) One may wonder why a serious, cutting-edge theater company like barebones productions is doing a wacky play about a team of preteen and young-teen girls entering a dance competition. But Clare Barron’s Dance Nation was a finalist for this year’s Pulitzer Prize for Drama. There just may be method (and even meaning!) behind the looniness. Playwright Barron is fascinated by the teenaged psyche, which can offer an uncensored view of the human condition: It’s teeming with drives and ideas that get muted down in adulthood. An earlier Barron play, the bizarre I’ll Never Love Again, had actors in choir robes singing passionate lines from Barron’s own teen diaries. Dance Nation goes psycho-nuclear in a different way. The young women on the dance team wrangle with every extreme emotion imaginable while hoping to win the Boogie Down Grand Prix with a routine about Mohandas Gandhi. The play includes dance moms and time travel, and casting isn’t age-appropriate—the New York production had one teen played by an actor in her 60s. Barebones’ cast includes Hope Anthony and Liron Blumenthal in two key roles, with Jerreme Rodriguez as the lone boy in the troupe. Performances continue through December 15. 1211 Braddock Ave., Braddock.(MV)

4) Can the violin be a featured instrument in today’s rock/pop/hip-hop music? Crossover violinist Damien Escobar says so, and he’s making it happen. The onetime child prodigy from Queens, New York first rose to fame as part of the duo Nuttin’ But Stringz with his brother Tourie. Then they split. Now Damien has forged a solo career, teaming with various other musicians on classically-infused tunes like “Fuse” from his 2017 album Boundless. You can catch Escobar on his U.S.-U.K. tour at the Rex Theater. 8 p.m. 1602 E. Carson St., South Side. (MV)

5) Local rockers The Hawkeyes are having an album release event for their latest effort, Ever For After, at the Hard Rock Cafe. The band is composed of Jay Wiley, Michael Grego, Colin Bronnenkant, and Tylar Parker. “Stone’s Throw Away” is a good example of their recent music. Snarfunkle opens. 8:30 p.m. 230 W. Station Square Dr., Station Square.

6) Light Up Night participants can work up quite a hunger with all the festivities. Revel + Roost has a solution—two floors of food and drink options. Guests can choose from the Revel menu of locally driven, seasonal cuisine or a special 3-course prime rib dinner. Wine pairings are offered for both the full menu and the prime rib dinner. The first floor will be a more family friendly, casual setting, with the second floor, Roost, having more exclusive private table dining. For reservations and more information visit the Revel + Roost website. 242 Forbes Ave., Downtown.