1) “Marty Mar” is in town tonight. That’s actor, comedian, director, and producer Martin Lawrence. He brings his LIT AF Tour to PPG Paints Arena, additionally featuring Ricky Smiley, DeRay Davis, Michael Blackson, and Benji Brown. Lawrence is best known for his film and TV roles including his signature sitcom “Martin.” He’s starred in such films as Blue Streak, and Big Momma’s House, Black Knight, and Wild Hogs. He also starred opposite Will Smith in Bad Boys and its sequel, Bad Boys II. Reportedly, Lawrence and Smith will reprise their roles in a new film in the franchise, Bad Boys for Life. The film is in pre-production and could be released in 2020. 7:30 p.m. 1001 Fifth Ave., Uptown. 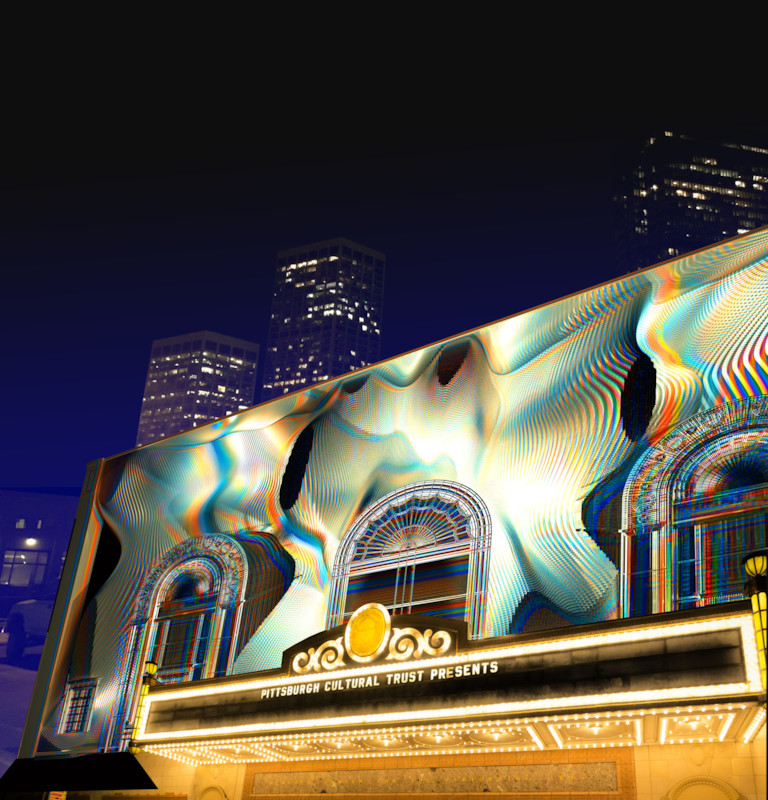 ‘Manifold’will wrap the facade of the Benedum Center in an exciting and constantly changing video art display accompanied by a musical score. (Photo: Renee Rosensteel)

2) Gallery Crawl in the Cultural District is happening tonight; it features visual arts, musical performances, and interactive exhibits. Tonight’s Gallery Crawl also kicks off The Pittsburgh International Festival of Firsts (see our story and overview of festival events). All events are free and take place at a variety of galleries, art spaces, and venues. Some galleries offer drinks and hors d’oeuvres. What a great way to sample some of Pittsburgh’s great arts and entertainment! 5:30 p.m., Cultural District.

4) “It’s time to kick out the jams, motherfuckers!” Sung by the late Rob Tyner, so begins the eponymous track from one the greatest rock and roll albums of all time: Kick Out the Jams by the MC5. The band formed in Detroit (the “MC” is short for “Motor City”), and the album was recorded live over two nights (Devil’s Night and Halloween) at Detroit’s Grande Ballroom in 1968. Despite the profanity, which generated some controversy among the label and retailers, the album reached no. 30 on the Billboard 200. The real measure of the band’s success can be charted among its influence on later musicians. The late MC5 guitarist Fred “Sonic” Smith inspired Sonic Youth’s band name. Some of the musicians inspired by the MC5, like Soundgarden’s Kim Thayil and Matt Cameron, are joining surviving MC5 guitarist Wayne Kramer for MC50, a live celebration of Kick Out the Jams from start to finish. The Detroit Cobras open. 9 p.m. Mr. Smalls Theatre, 400 Lincoln Ave., Millvale. (CM)

5) Originally hailing from Melbourne, Australia, Little River Band  formed in ’75 with members from several musical groups. Their goal was to craft catchy songs with wide appeal that gained radio airplay. They achieved that with songs heavy on vocal harmonies that had quality guitar play and occasional funky bass lines, like “Happy Anniversary,” “Lonesome Loser,” and their biggest—No. 3 on Billboard’s Hot 100 Singles chart— “Reminiscing.” There are no founding members left in the band, but the music goes on. Opening is Silent Partner and Junction PA. 8 p.m. Carnegie of Homestead Music Hall, 510 E. 10th Ave., Munhall. (RH)

6) Cello Fury is a local, cello-rock ensemble. (Simon Cummings of Cello Fury recently played with the Clarks at an outdoor show at Stage AE.) The ensemble will celebrate the release of its third album, X, at the Hard Rock Cafe. 9 p.m. 230 W. Station Square Dr., Station Square. (CM)