1) Sweden has produced a pipeline of pop and rock talent over the last 40 years. Bands such as ABBA, Roxette, Ace of Base, Europe, Eagle-Eye Cherry, The Cardigans, The Hives, The Tallest Man on Earth, Robyn, and First Aid Kit have all had success outside of Scandinavia. Now there’s another Swedish band on the rise—The Radio Dept. The dream-pop/alt-rock band hails from Lund, Sweden, and consists of Johan Duncanson, Martin Larsson (aka Martin Carlberg), and touring member Daniel Tjäder. The group has four albums out including their latest, 2016’s critically acclaimed Running Out of Love. They describe Running Out Of Love as being “about the impatience that turns into anger and ultimately withdrawal when our love for the world and our existence begins to falter.” “Swedish Guns,” from the album, is an indictment of the Swedish arms manufacturers and the damage that their products cause. The lyrics may sometimes be intense, but the music is a melodic mix of vocals, guitars, keys, and drums. Good news, you don’t have to travel all the way to Sweden (although that would be nice) to see them. Their U.S. tour includes a stop at Mr. Smalls Theatre. 8 p.m. 400 Lincoln Ave., Millvale. (RH) 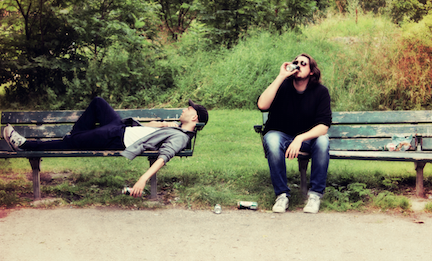 The Radio Dept. chilling out and thinking about new songs.

2) It’s hard to imagine that a Pulitzer Prize-winning playwright ever wrote something this bizarre, but you can see for yourself when THE REP performs David Lindsay-Abaire’s A Devil Inside. Lindsay-Abaire won the 2007 Pulitzer for Rabbit Hole, a gripping psychodrama. But he also writes dark comedies about people coming unhinged in weird ways, and A Devil Inside is perhaps the wildest. It has been described as Dostoevsky’s Crime and Punishment meets “Arrested Development.” A young New York City man is told that he must avenge the death of his father, who was stabbed and had his feet chopped off while hiking in the hills to lose weight. The young man is in love with a college girl, who has a crush on her Russian Lit professor, who is obsessed with the desire to murder an appliance repairman, whose girlfriend is … wait. Do people still have appliances repaired? THE REP is Point Park University’s professional company. They’re doing A Devil Inside at Pittsburgh Playhouse. 8 p.m. Performances through February 18. 222 Craft Ave., Oakland. (MV)