1) Many of us came to know and love actor/comedian Seth Meyers from his years on NBC’s legendary “Saturday Night Live.” On the show he was the head writer, cast member, and delivered the parody news segment of the program, “Weekend Update.” “SNL” spring-boarded him to hosting his own talk show, “Late Night with Seth Meyers,” which airs on NBC weeknights at 12:30 a.m. Meyers has hosted the Emmy Awards, Golden Globe Awards, ESPYS, and White House Correspondents Association Dinner. He has even been in several movies and produced some of his own media projects. Meyers possess a smart, ready wit, hitting his targets squarely, all while maintaining a broad grin. He mainly was raised in Bedford, New Hampshire, but his father hails from Pittsburgh, so he was raised right, with an affinity for Pittsburgh’s sports teams. You can catch Meyers performing stand-up tonight at Carnegie of Homestead Music Hall. Meyers 7 p.m. show is sold out, but at publication time some tickets still remain for his 9:30 p.m. show. 510 E. 10th Ave., Munhall. 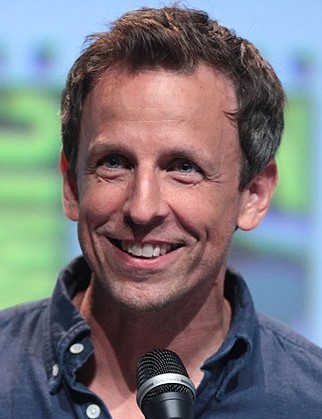 2) 98 Degrees is a boy band whose members all hail from Ohio. They are remembered for such hits as “The Hardest Thing,” and their appearance on Mariah Carey’s number one song, “Thank God I Found You,” which also features the R&B singer Joe. The members split in 2002, but reunited in 2012. Their last album was a Christmas album, 2017’s Let It Snow, but don’t expect any holiday standards for their June concert at the Meadows. 8 p.m. 210 Racetrack Rd., Washington. (CM)

3) For a kickoff to Father’s Day weekend, how about a father-son rock and roll show? That will be happening at South Park when Joe Grushecky and The Houserockers play the Allegheny County Summer Concert Series with Milly opening. Joe Grushecky’s son, Johnny Grushecky, plays guitar and sings as one of The Houserockers. Johnny also has his own rock band, Milly, which he formed with Seth Milberger in 2014. Joe Grushecky’s latest album is 2018’s More Yesterdays Than Tomorrows, and Milly’s is Place in My Mind, also released that year. 7:30 p.m. South Park Amphitheater, 3700 Farmshow Dr., South Park.