1) Turns out Shania Twain isn’t saying goodbye just yet. The Canadian country singer was last in Pittsburgh on her supposed farewell tour, but she returns yet again. This time, she’s promoting a new album, Now, her first since 2002’s Up! She’s one of the best-selling artists of all time; she’s collected five Grammys, and with 1997’s Come On Over, claims the title of best-selling country album and best-selling album by a female artist. Featuring hits “Man! I Feel Like a Woman!,” “That Don’t Impress Me Much,” and “You’re Still The One,” it was a country-pop-rock crossover juggernaut. After a long struggle with voice problems, she returned to performing with Shania: Still The One, a two-year residency at Caesars Palace in Las Vegas from 2012 to 2014. The Rock This Country Tour, her “farewell tour,” followed. Twain plays at PPG Paints Arena. Bastian Baker opens. 7:30 p.m. 1001 Fifth Ave., Uptown. (EC, CM)

2) In Groundhog Day, a man visits an enchanted town where the same day keeps repeating itself. In the Lerner and Loewe musical Brigadoon, something like the reverse happens: Two men visit an enchanted town that exists for just one day every hundred years—and then it will vanish until next day, a century later. The town, called Brigadoon, is in the remote Scottish Highlands. The visitors are two New Yorkers who’ve gotten lost in the hills while out hunting. When the magical day dawns, they wander into Brigadoon by chance (it’s not on any map). Unaware, at first, of the spell that the town is under, each man meets a beautiful lass who entreats him to stay. Many predicaments and surprising twists follow, as it seems that romance across the space/time barrier is not the only strange thing brewing. Brigadoon premiered on Broadway in 1947. The show is a longtime audience favorite for multiple reasons: the ingenuity of the story, the songs (“Almost Like Being in Love” is best known), and the spectacular dancing, which includes a Scottish sword dance. Pittsburgh CLO performs Brigadoon at Benedum Center. 7:30 p.m. Performances continue through July 22. 237 7th St., Cultural District. (MV) 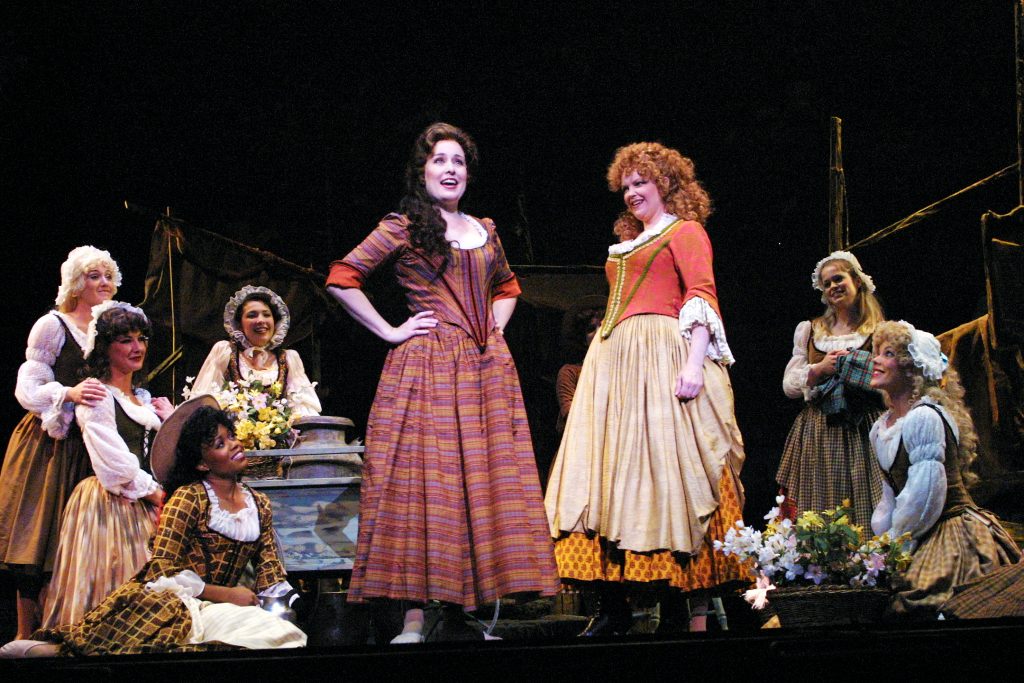 Out from the Scottish mists come the women of ‘Brigadoon,’ in a month when musicals take the spotlight. Photo: Matt Polk.

3) Singer-songwriter Kenny Wayne Shepherd and his band visit the Palace Theatre on their 2018 tour. Much can be said of Shepherd’s prolific library—it’s raw, southern-styled, slightly grungy, and highly bluesy. Shepherd, 41, hails from Shreveport, La.; his southern roots are apparent in his music. Impressively, he’s relatively young compared to many of his blues compatriots, though he’s been recording music since he was only 16 years old; he released his first studio album, Ledbetter Heights, in 1995. It’s no wonder: He’s got a hell of a talent for blues guitar and boasts a strong stage presence. Since that first release, he’s carved out an enviable reputation as one of America’s most accomplished blues guitarists. Besides selling millions of albums, Shepherd has received three Grammy nominations, two Billboard Music Awards, and a slew of other awards specific to the blues genre. His current tour promotes and celebrates his newest release, Lay It on Down, which dropped last August. Shepherd is joined by the similar blues/rock artist Beth Hart, who also has a Grammy nomination, and her band. 7:30 p.m. 21 W. Otterman St., Greensburg.