1) The Spinners, a male vocal and dance group who originated in the suburbs of Detroit, enjoyed considerable success in the ’70s with top 10 hits including “Could It Be I’m Falling in Love,” “The Rubber Band Man,” (If they were from Pittsburgh it would be “The Gum Band Man”) and “I’ll Be Around.” In ’74, they teamed up with Dionne Warwick to produce the number one smash hit “Then Came You.” During the 1960s The Spinners were with Motown before switching to the Atlantic label in the ’70s. The Spinners still tour regularly and have one original Spinner remaining—Henry Fambrough, who has been in the band since its formation in 1954. That’s a lot of R&B. The beat goes on in a show at The Palace Theatre with The Marcels opening. 8 p.m. 21 W. Otterman St., Greensburg. (RH) 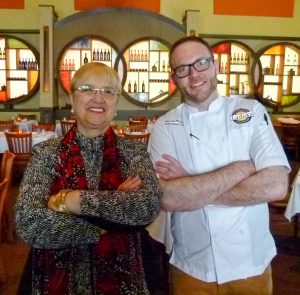 Lidia’s has also welcomed a new executive chef with the arrival last year of Daniel Walker. He worked at several renowned restaurants and luxury hotels before becoming sous chef at Lidia’s flagship restaurant in New York City. Felidia’s. Walker then worked in the same position in his hometown at Lidia’s Kansas City. Growing up there he credits his grandmother for sparking his interest in food and cooking. He is applying his culinary knowledge, under Bastianich’s guidance, to the menu at Lidia’s Pittsburgh.