1) The Decemberists’ fourth album, The Crane Wife, is nearly 12 years old, and in that time, it has permeated numerous facets of popular culture. “The Crane Wife 3,” a cut from the album, appeared on “Scrubs,” and the band performed it on the season six finale of “Parks and Recreation.” The Portland, Oregon, group amassed a gathering over the past decade with its indie, folk-rock sound, culminating in the number one album, 2011’s The King Is Dead. In that same year, the band collided auditory, literary, and televisual worlds with its music video for “Calamity Song.” The video, directed by “Parks and Recreation” co-creator Michael Schur, adapts a scene from David Foster Wallace’s novel Infinite Jest. 2018’s I’ll Be Your Girl is their latest album. Their concerts are known for audience participation, so be ready to contribute to their show at the Benedum Center. Eleanor Friedberger, of The Fiery Furnaces, opens. 8 p.m. 237 7th St., Cultural District. (CM)

2) One may describe Pablo Francisco and his brand of comedy as madcap, raunchy, or loud. His act is something like a collage of sound effects, impressions, and various self-developed characters woven together with wit, kinetic flair, and a keen eye for the absurd. There’s a very good chance you may know him as the guy that does the impression of the guy that does the voice for movie trailers (you know—the guy with the really deep, epic-sounding voice? Yeah—that guy, the late Don LaFontaine). However, though his set relies heavily on his expert voice work, Francisco prefers not to think of himself as a sound or prop comic—rather, he thinks of himself as an “A.D.D. comic,” as someone just “messing around.” Francisco has been featured on numerous sketch comedy shows—most notably, “MadTV” and “Mind of Mencia.” Likewise, he’s appeared on “The Tonight Show” and Howard Stern’s radio show. Check him out at Pittsburgh Improv. 8 p.m. Performances through Sunday. 166 E. Bridge St., Homestead.(CM) 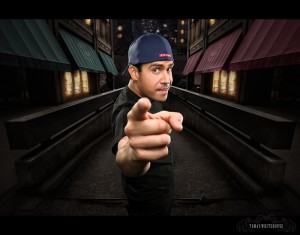 Pablo Francisco wants you, to come and enjoy his show. photo: Tomas Whitehouse

3) It’s high-speed parody season in Pittsburgh. Having barely caught our breath after recent touring companies gave us super-condensed spoofs of “Game of Thrones” and the Harry Potter books, we now must gird our proverbial loins for the granddaddies of all such comical condensers, the Reduced Shakespeare Company. The show is RSC’s latest, William Shakespeare’s Long Lost First Play (Abridged). It premiered in the theater at the Folger Shakespeare Library in Washington, D.C. in 2016, and the video above—made for that premiere—will give you a brief intro. (Don’t have 3½ minutes? All right: The Long Lost First Play is a hypothetical mashup of mixed-up first drafts of plays that Shakespeare really wrote later. E.g., Prince Hamlet meets Lady Macbeth, etc.) The Reduced Shakespeare act can look merely silly when glimpsed in small doses. But the guys are excellent actors, and the longer you watch, the funnier they get. They’re in town for a month-long run so you can even catch ‘em twice. Performance continue through July 1. At the O’Reilly Theatre, 621 Penn Ave., Cultural District. (MV)

4) No, Igor & Red Elvises are not an Elvis covers band. Yes, they are Russian—well, Russian-American. But no, they are not communists. In fact, frontman Igor Yuzov left the Soviet Union for America as an adult, and with his band, he plays original, Siberian surf rock. Their latest album is 2017’s She Works for KGB. They play the Hard Rock Cafe. Prime 8 and Chase and the Barons open. 8 p.m. 230 W. Station Square Dr., Station Square. (CM)

5) Double Blind Productions is a virtual theater collective, existing in real life but not always with everybody in the same place at once. Most members are Pittsburgh-based or Burgh-intensive, however, and Double Blind presents a very intensive performance piece titled Escape Velocity at the New Hazlett Theater. Escape Velocity is also eclectic, immersive, and billed as a “narrative circus.” (The company’s members include circus artists.) Tarot cards are featured, with the draw of the cards pointing to what may happen next. The audience participates. According to Double Blind’s website, “Escape Velocity tells the story of a soul trapped in limbo … [and] explores the many ways we are in a prison, but the door is locked from the inside.” Buy tickets online through the New Hazlett. Tonight only. 8 p.m. 6 Allegheny Square East, North Side. (MV)