Costumed as cops, the boys are about to show what they’re made of in ‘The Full Monty.’

1) Pittsburgh CLO presents the world’s only musical about unemployed steelworkers getting naked. It’s not easy to find humor in the loss of manufacturing jobs, but The Full Monty gives it a go. “The full monty” is a British slang term meaning, roughly, “all of it.” In one sense it refers to what striptease dancers show you when they take it all off, and that’s how the guys in the story hope to make money, creating a male exotic dance act that will outstrip the Chippendales. The Full Monty began as a 1997 British movie set in Sheffield, England. Along with being a snappy working-class comedy, the film explored deeper themes—for the men, the prospect of stripping in public gets tied up with exposing their inner fears and feelings—and thus The Full Monty became a global hit, as a sort of cinematic anthem for the dispossessed. Did Broadway jump on it? Quicker than you can say “day trader.” American composer David Yazbek and playwright Terrence McNally produced a musical stage version that moves the setting to Buffalo, New York and replaces the movie’s jukebox-rock soundtrack with show tunes. CLO performs The Full Monty at Benedum Center. 8 p.m. Performances continue through July 15. 237 7th St., Cultural District. (MV)

2) The Ohio Players’ “Love Rollercoaster” was a number one single for the Dayton funkateers. One minute and 24 seconds into it, somebody screams. There have been many explanations, but the most widely circulated involved Ester Cordet, the model on the Honey album cover. The story goes that the heated honey left her burned—her scream is either from the burns themselves or from the band’s manager stabbing her to death (!) after she threatened to sue for her disfigurement. Complete urban legend, of course; it was really keyboardist Billy Beck. Cordet, a former Playboy Playmate, is also still alive. Urban legend aside, “Love Rollercoaster” is a standout funk tune and one of two number one hits for the band—the other was “Fire.” The group will be bringing the funk to the Rivers Casino. 8 p.m. 777 Casino Dr., North Shore. (CM) 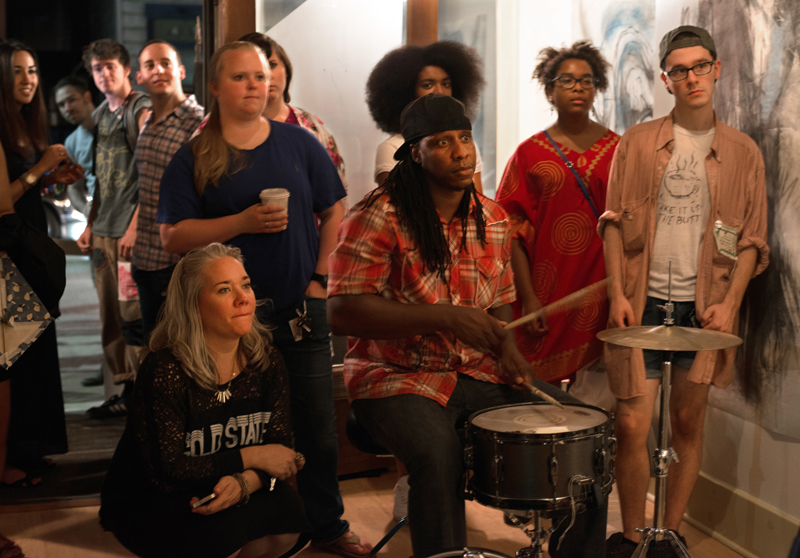 During a 2015 Unblurred, fans and friends of artist/songwriter Aaron Pfeiffer gathered for his performance at Fieldwork Gallery. (Photo: Martha Rial)

4) Persons wishing to experience Pittsburgh’s summertime pleasures in the relative cool of the evening will do well to take part in the monthly Unblurred events along Penn Avenue in Garfield. They’re on the first Friday of each month, and what’s up is quite a lot. Art galleries along the street are open—the Silver Eye Center for Photography, Level Up Studios, and several more—as are other shops, eateries, and so forth. Many have music or performances. The Garfield Night Market, with stalls and vendors selling a wide spectrum of interesting goods, operates in summer. Above all, Unblurred is a fine occasion to simply hang out, mill about, and enjoy. 6 p.m. till later at night, 4800 through 5500 blocks of Penn Ave., Garfield. (MV)