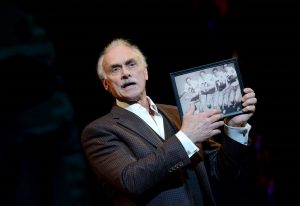 Rocky Bleier shares memories of his glory days on the gridiron in his one man production, ‘The Play.’

1) Of the many outstanding football players in Pittsburgh Steelers history, none has accomplished what Robert “Rocky” Bleier did. A running back from Notre Dame, Bleier was drafted almost as an afterthought (in the 16th round) by the Steelers in 1968, then was drafted again by the U.S. Army. He won medals for combat service in Vietnam; unfortunately, one was a Purple Heart. Bullets and shrapnel tore severe wounds in Bleier’s legs. Just walking became a struggle. Doctors told him playing ball again was unthinkable. Yet Bleier kept working, miraculously regained a spot on the Steelers roster in 1971—and wound up starring in the backfield with Franco Harris through the team’s run of four Super Bowl titles that decade. Sportswriter Gene Collier has made Bleier’s story into a one-man play, called simply The Play. Bleier himself performs in it, drawing on the stage presence he’s gained from his post-football career as a public speaker. 7 p.m. Performances through January 6. O’Reilly Theater, 621 Penn Ave., Cultural District. 2) The movie Xanadu had Olivia Newton-John, Pittsburgh’s own Gene Kelly, music by Electric Light Orchestra, and animation by Don Bluth. What could go wrong? Everything, evidently. Xanadu, which helped to inspire the Golden Raspberry Awards, flopped at the box office in 1980. The songs, which included the No. 1 “Magic,” were a hit, however. A musical adaptation previewed and later opened on Broadway in 2007. It kept the music while poking fun at the cinematic version. The combination was a hit, which garnered several Tony Award nominations. The plot involves Kira, a Greek muse who falls in love with Sonny, a mortal who wants to open the first roller disco. Their love is forbidden, and Kira’s two evil sisters intervene. Xanadu is by Jeff Lynne, John Farrar, and Douglas Carter Beane.  CLO Cabaret performs the musical Xanadu in the Cabaret at Theater Square. 7:30 p.m. Performances continue through January 7. 655 Penn Ave., Cultural District. (CM)